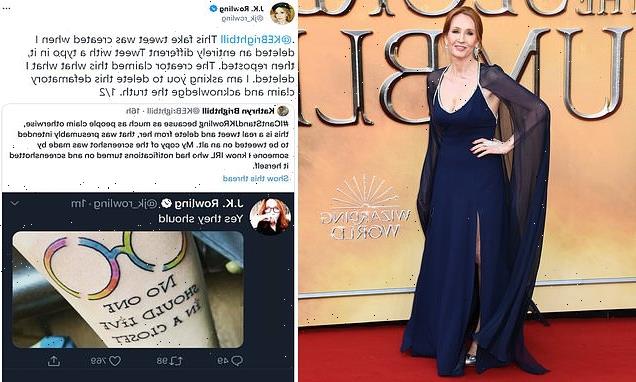 Furious JK Rowling threatens Twitter user with legal action over ‘fake and defamatory tweet’ claiming to be written by the Harry Potter author, saying people should ‘live in a closet’

JK Rowling today threatened a Twitter user with legal action after they shared a fake and defamatory tweet claiming the Harry Potter author said people should ‘live in a closet’.

The author, 57, shared a screenshot of a doctored image posted online that showed a rainbow-coloured tattoo that read ‘No one should live in a closet’.

The fake tweet, which has been circulating online since 2020 and was altered to look as though it had been authored by Rowling, replied: ‘Yes they should’.

Kathryn Brightbill, a policy analyst based in Florida, USA, last night reshared the image to her 11,000 followers online. It had been liked more than 7,800 times and remained on her Twitter feed more than 18 hours after she first published it.

A furious Rowling today threatened Ms Brightbill with legal action and refuted claims she had shared the tweet. The author also clarified that the fake message was originally created after she reposted a now-deleted tweet that contained a typo.

She tweeted today: ‘This fake tweet was created when I deleted an entirely different Tweet with a typo in it, then reposted. The creator claimed this what what I deleted. I am asking you to delete this defamatory claim and acknowledge the truth.

‘My lawyers would also very much like to know the identity of your ‘real life’ friend who ‘screenshotted’ it herself.

‘As this Tweet never came from my account, she can’t have captured it in the form it appears here.’ 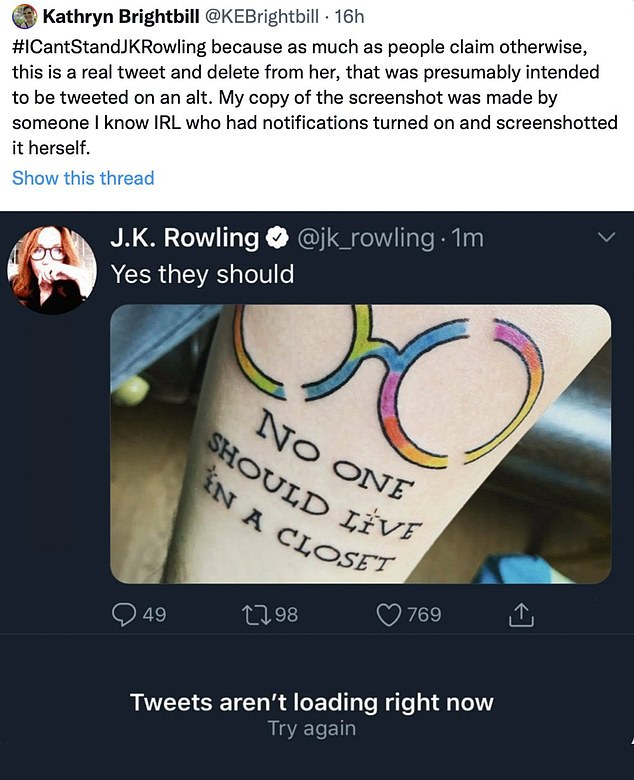 JK Rowling today blasted a Twitter user who shared a ‘fake and defamatory tweet’ from 2020 that falsely portrayed the Harry Potter mastermind as criticising a pro-LGBT tattoo. Pictured: The doctored image that sparked the online row 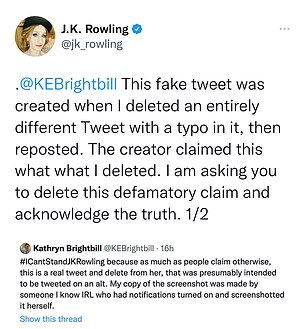 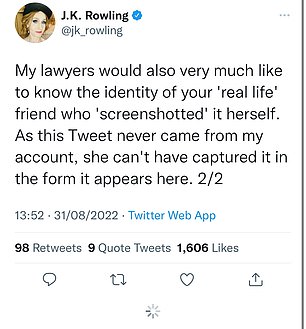 A furious Rowling today threatened Ms Brightbill with legal action and refuted claims she had shared the tweet. The author also clarified that the fake message was originally created after she reposted a now-deleted tweet that contained a typo 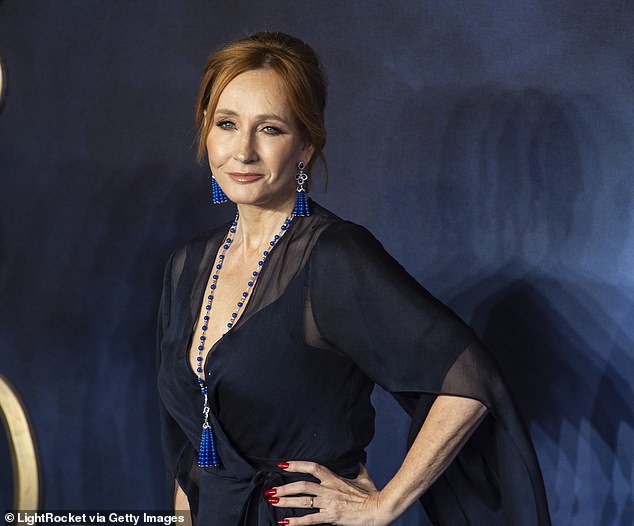 The false image, which shows a rainbow-coloured set of glasses in the style of Harry Potter’s, uses the font Lumos, which is closely associated with the wizarding world that Rowling created.

Sharing the forged image online, Brightbill tweeted last night: ‘#IcantstandJKRowling because as much as people claim otherwise, this is a real tweet and delete from her, that was presumably intended to be tweeted on an alt [alternate account].

‘My copy of the screenshot was made by someone I know IRL who had notifications turned on and screenshotted it herself.’

Rowling has been repeatedly targeted by trolls after making critical comments about the transgender lobby – including protesters standing outside her home with placards after her address was posted online last year.

Police also investigated a bomb threat against the author after a trans activist urged Twitter users to send a bomb to her home.

The offensive tweet included a picture of the Harry Potter creator, her family’s address, an image of a pipe bomb and the cover of a bomb-making handbook.

It comes just days after Rowling received online death threats from an extremist as she warned social media is ‘a gift for people who want to behave in a malign way’.

Speaking to Graham Norton on his Virgin Radio show earlier this week, she said: ‘Social media can be a lot of fun and I do like the pub argument aspect of it. 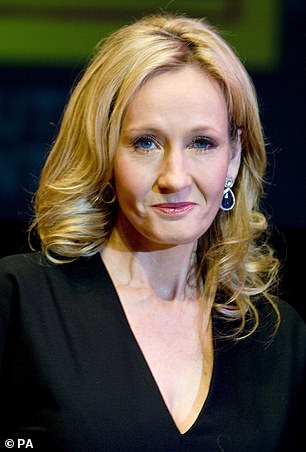 ‘That can be a fun thing to do. But there’s no doubt that social media is a gift for people who want to behave in a malign way.’

And on whether anything can be done to prevent online trolls, she added: ‘I think on one level I’m not sure I can.

‘I’m not sure any individual can. I try to behave online as I would like others to behave. I wouldn’t ever want to… I’ve never threatened anyone, obviously, and I certainly wouldn’t want anyone to go to their houses or anything like that.’

She added that she reported the apparent threat from an Islamic extremist over her support for novelist Salman Rushdie to Twitter, before posting a screenshot of the response, commenting: ‘These are your guidelines, right? “Violence: You may not threaten violence against an individual or a group of people. We also prohibit the glorification of violence… “Terrorism/violent extremism: You may not threaten or promote terrorism”…’

In an apparent bid to get Aziz booted off Twitter, Rowling later posted: ‘@TwitterSupport any chance of some support?’.

Rowling has also historically spoken out about cancel culture amid claims she has been ‘cancelled’ by younger generations, but in a rare interview she said she ‘didn’t want to be a part’ of The Return To Hogwarts reunion. 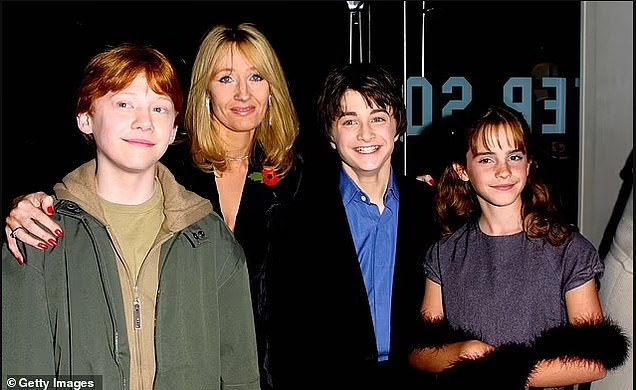 Pictured: JK Rowling with young stars from Harry Potter. The author has often tweeted critically about the use of inclusive language and spaces, most memorably retweeting a post which referred to ‘people who menstruate’

The author has often tweeted critically about the use of inclusive language and spaces, most memorably retweeting a post which referred to ‘people who menstruate’ and adding: ‘I’m sure there used to be a word for those people. Someone help me out. Wumben? Wimpund? Woomud?’

Transgender activists say Ms Rowling’s stances are discriminatory and fail to recognise the difficulties that transgender and non-binary people face, but some feminists argue it is vital to retain single-sex spaces to protect vulnerable women.

Ms Rowling has also received backlash from claims she made in a bid to defend herself in 2020, including the claim that only people who are ‘privileged or lucky enough never to have come up against male violence’ support inclusive spaces.

She said: ‘I stand alongside the brave women and men, gay, straight and trans, who’re standing up for freedom of speech and thought, and for the rights and safety of some of the most vulnerable in our society: young gay kids, fragile teenagers, and women who’re reliant on and wish to retain their single sex spaces.

‘Polls show those women are in the vast majority, and exclude only those privileged or lucky enough never to have come up against male violence or sexual assault, and who’ve never troubled to educate themselves on how prevalent it is.’

How to retire with no savings