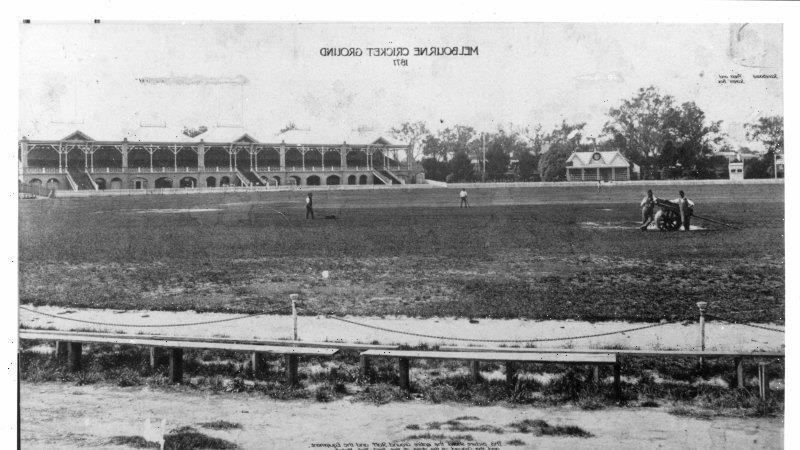 From the Archives, 1877: MCG hosts the first international Test Match

145 years ago, the first officially recognised international Test match was played at the Melbourne Cricket Ground between Australia and England. After four days of play Australia defeated England by 45 runs.

This match, in which the cricketing strength of Australia was to meet the English eleven on even terms, and which has been looked forward to as the pièce de résistance of the programme of the season, was commenced yesterday, on the Melbourne cricket ground. 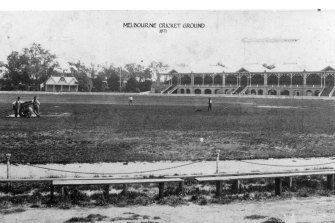 The MCG is prepared for the first Test.

The rapid strides that cricket has made in those colonies of manifest when it is remembered that Parr’s eleven, which played here in 1864 – just thirteen years ago – was equal to the task of beating twenty-two either of Victoria or New South Wales. Now an eleven which is probably stronger is beaten by fifteen of those colonies, and is met on even terms by a combined team. 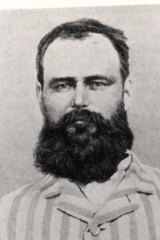 As stated yesterday, the match had lost a good deal of its interest in public estimation owing to the fact that neither Evans nor Allan was to take part in it, and the conduct of the latter in refusing to play after leading everyone to believe that he would do so was commented on in most unmeasured terms all over the ground.

Great complaints were made, too, about the adjournment of the players for lunch. It was said, and very justly too, that commencing so late as one o’clock and not playing after five was little enough time in all conscience to devote to so important a match; but when nearly an hour is deducted from that it becomes really absurd.

Four days, with four hours’ play on each, will never finish this match, and so, if there is any intention of finishing it, the arrangements had better be entirely changed.

The combined team elected D. Gregory, of New South Wales, as their captain, and he was fortunate enough to win the toss, and determined upon going in to bat on a splendid wicket; and when the stumps were drawn for the day the Australians were still in, having lost six wickets for the total of 166.

Of this number Bannerman, who went in first and was not out at the finish, obtained no less than 126 by the finest display of vigorous batting ever seen in Melbourne. He was somewhat abroad at the start, especially to Shaw, but settled down afterwards, and treated all the bowlers alike, scoring at times with startling rapidity. All the English bowlers were tired, and Armitage in particular came in for condign punishment at the hands of the brilliant New South Welshman.

Such rubbish as was bowled by Armitage in the three overs delivered by him has probably never previously been seen on the ground – full tosses high over the batsman’s head being varied by common domestic grubbers.

Horan was unfortunate, as when he was well set and batting well a ball from Shaw got into a heel mark and “kicked” hitting the batsman on the thumb, from which he was caught. Cooper played well for his runs, and was a long time at the wickets; but the Gregorys and Thompson were unfortunate in being disposed of for two runs between them. The way in which Lillywhite managed his bowling did not commend itself to those qualified to judge; and it was considered that he should certainly have had Shaw on a second time.

The fielding generally was good, Hill in particular coming in for frequent applause for his splendid return to the wickets; but Pooley’s absence from the wicket was by no means compensated for by Selby, who did not even stand up to the fast right-hand bowling.

The fine score made by the Australians – thanks to Bannerman – has revived public interest in the match, and probably the attendance during the remainder will be large. There were about 2500 present yesterday.

Bannerman’s total of 126 out of 166 scored is very similar to a score made by W. G. Grace in a North v South match at Huddersfield last season, when he got 126 out of a total of 159 made by the South in their first innings.