Home » World News » From Kabul to Melbourne: the Afghans safe at last, and the ones left behind 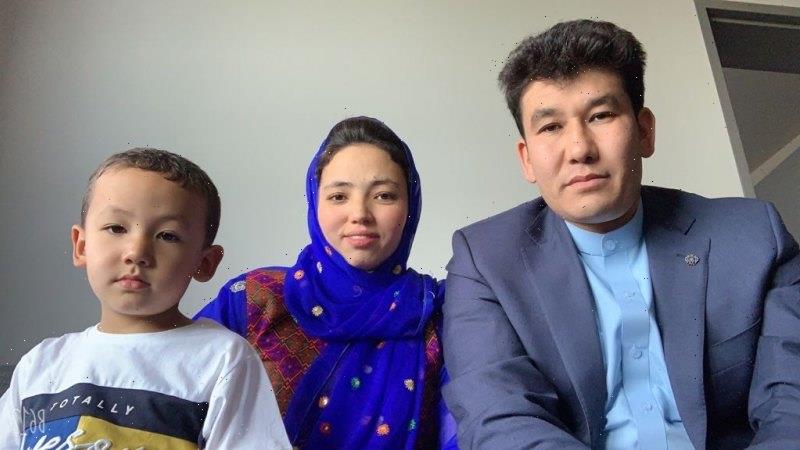 From Kabul to Melbourne: the Afghans safe at last, and the ones left behind

A week ago, Afghan Australian Neamat Rahimi’s was avoiding gunfire outside Kabul airport. Today, he and his young family are safe in hotel quarantine in Epping in Melbourne’s north, 11,000 kilometres from the Afghan capital.

It’s a surreal feeling, and although he is endlessly grateful, Mr Rahimi is still reeling from the trauma of what he witnessed in the past fortnight. 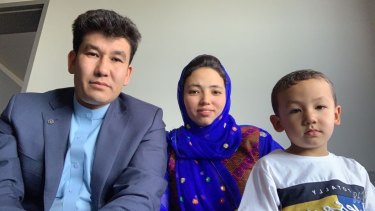 “The past few weeks of my life has been hell,” he says. “I can’t believe it … it all happened very quickly.”

Mr Rahimi, who became an Australian citizen in 2014 after he migrated in 2010, had been trying to secure a visa for his wife, Fouzia, and four-year-old son, Mirwais, since February 2019. Fearing the encroachment of the Taliban, the Hazara tradesman, who lives in Endeavour Hills, flew to Kabul in February this year to be with his wife while they awaited the paperwork.

Months went by, and when the Taliban took the capital on August 15, the family became desperate. Their visas were finally approved last week after intervention from federal Labor MP Julian Hill, who was dramatically kicked out of the parliamentary chamber this week after accusing the government of “killing [his] constituents”.

“We tried to get a ticket to get out of Kabul, but it was too hard,” Mr Rahimi said. “We went to the airport about six times. Six times we tried every gate around it.”

During one attempt, Mr Rahimi says he was beaten by Taliban members with sticks when they realised he was a foreigner trying to leave the country. 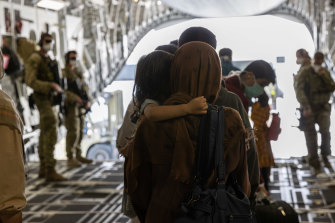 Afghanistan evacuees arrive at Australia’s main operating base in the Middle East, on board a Royal Australian Air Force C-17A Globemaster.Credit:ADF

“They have a big stick and they hit me, they hit me in my legs and my back,” he said. “We left the queue that day – my son was crying, my wife said ‘let’s go’.″⁣

All week, the chaos outside the Hamid Karzai International Airport has been beamed across the world – explosions, shots, tear gas, desperate Afghans clambering in moats filled with sewage to try to get to the gates. Mr Rahimi said he saw two young children trampled to death by the crowd.

“Their parents are not there. The parents sometimes leave their kids behind because they have four or five more kids. They can’t take them all, they take maybe one or two, the rest remaining,” he said. 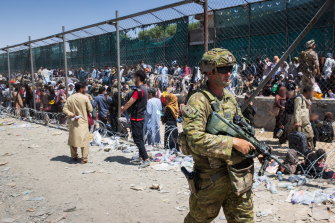 ”The huge amount of people, they’re pushing each other and when they push they fall, when they fall the people walked on them.”

The family secured a spot on the floor of a military flight from Kabul to Dubai. From there, they were put on commercials flights, arriving in Melbourne on Monday. 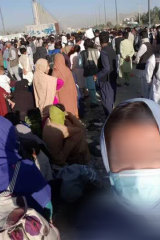 Jamshid’s wife outside Hamid Karzai International Airport, Kabul. Two hours after this photo was taken, a suicide bomber detonated an explosive in this exact spot.

The Australian government evacuated 4100 people before withdrawing troops completely this week. A suicide bombing on Thursday outside the airport by terror group Islamic State Khorasan — which killed scores of Afghans and at least 13 US Marines — marked the point of no return for Australia’s presence.

Dandenong man Jamshid, 32, was desperately hoping to get his wife and two daughters out of Kabul this week. They sent a photo of themselves exactly at the site of the suicide blast just two hours before the explosion.

Luckily, they were unharmed but the Melbourne father fears for his family’s future, and doesn’t know what to do next. His wife and children are awaiting confirmation of their Australian family visa, and the Taliban recently searched their home in Kabul.

“Every hour, I am checking the news and Facebook,” he said. “Every day, my daughter calls me and says, ‘hi Daddy, what happened? When will I see you again?’ They’re in a very bad situation.”

Another man, Farhad —not his real name because revealing his identity could endanger his family— was among the lucky ones to escape to Australia.

The 28-year-old is now in hotel quarantine in Richmond with his wife, an Australian citizen. He applied for a partner visa in 2019 which has still not been processed. He was able to leave Kabul late this week after getting an emergency visa, but he and his wife almost didn’t make it.

The couple tried three times to reach the airport before Australian forces plucked them from the crowd after seeing their sign that read “Australian citizen”.

“There were thousands of people trying to get into the airport, kids were screaming and people lost their children,” Farhad said.

He is dealing with the trauma of leaving family members behind. “We’re grateful we’re alive but we’re worried, extremely concerned, about people being caught up in Afghanistan,” he said.

Farhad wants to go to university in Melbourne, and build a peaceful life here with his wife. He had never seen Australia before this week, and from his hotel window, he says the city looks inviting as his new home.

“I can see the garden, I can see a park right in front of me,” he said. “I find it very, very beautiful.”

CategoryWorld News
TagsA from Kabul Melbourne the to