Fred Nile's Christian Democratic Party is facing extinction with dwindling membership, as the party's treasurer launches legal action against Mr Nile, his wife and others, accusing them of invalidly claiming more than $100,000 in party funds for their own benefit.

The NSW Electoral Commission issued a notice to the party on September 17, flagging that it was considering deregistering the political party for having fewer than 500 members. 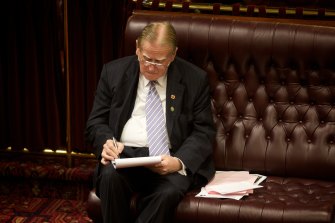 Christian Democrats leader Fred Nile has been a Member of Parliament for 37 years.Credit:Jon Reid

It came within days of party treasurer Charles Knox filing a Supreme Court summons against Nile, his wife Silvana, Annie Wright, Mark Moody-Basedow and the party itself, claiming that they are not valid financial members of the "completely dysfunctional" state board. 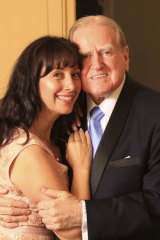 In an affidavit, seen by the Herald, Mr Knox said there had been recent "heated disagreements at state board meetings" about the proposed payment of party funds to the Niles' and Ms Wright.

His affidavit stated that the money claimed by Family World News breached NSW Electoral Commission rules on associated entities and on gaining a personal advantage.

He also said he was concerned that the recent "purported sacking of Craig Hall as [party] state manager and purported appointment of Annie Wright in his stead is a prelude to the payment" of the money being claimed.

"My client is appalled at the activities of principally two ladies, Silvana Nile and Annie Wright, who appear to be depleting the funds of the party," said Mr Knox's lawyer Malcolm Carr. He is seeking to liquidate the organisation after issuing the summons in the Supreme Court last week.

Mr Carr said the constitution of the party states that anyone on the board must be a financial member of the party, but some board members "haven't paid their dues for years."

Mr Knox has been unable to enter the party's Parramatta head office since the locks were changed on September 11. He has also been denied access to the party's bank account.

When contacted by the Herald on Wednesday, Mr Nile said the claims against him and the party were "just not true."

"Charles seems to have got inaccurate information. We're hoping we can straighten him out, hopefully later today [Wednesday]," he said.

"We've made an appointment to meet him and discuss with him, as to where he is coming from. I dispute everything, definitely."

Mr Nile added that Mr Knox did not have access to the party's bank account because he had been under suspension for at least two weeks prior to the court action being lodged.

He said the party was "all working very well, no doubt about it," and put the deregistration notice from the Electoral Commission down to a paperwork bungle.

"We have plenty of members, we just have to send back a new form. The office operates on sending in the minimum number of names. If the electoral office wants 500, they just send in 500," he said.

"It's just the way the party does it. If I was doing it I would send 2000 members," he said, before adding that he believed the party currently had "well over 550 members."

The most important news, analysis and insights delivered to your inbox at the start and end of each day. Sign up to The Sydney Morning Herald’s newsletter here, to The Age’s newsletter here and Brisbane Times‘ here.

Thousands of Brits can apply for £5,000 grant on energy bills from today
World News