Home » World News » Four-sided friendship is history in the making 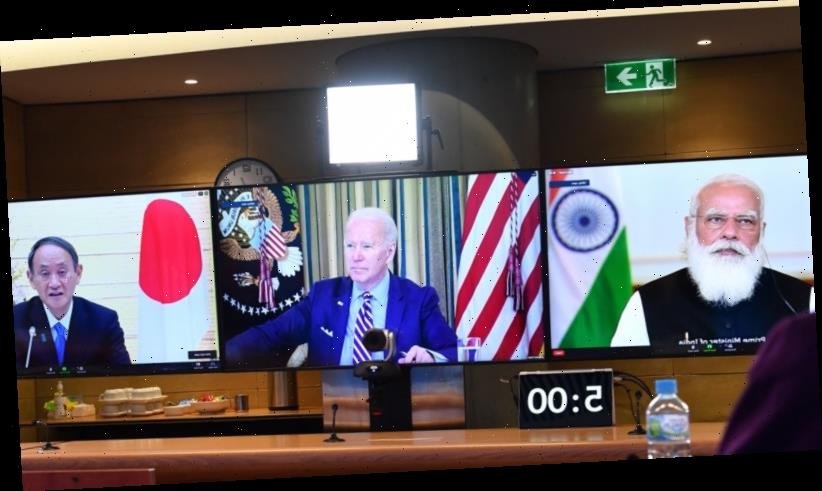 Four-sided friendship is history in the making

The meeting that US President Joe Biden hosted for Australia, India and Japan on the weekend might eventually go down in history as a foundational moment, an alliance of democracies rallying against China’s relentless striving for hegemony.

Joe Biden told the first leaders-level meeting of the Quad group of nations that they were meeting “for a purpose that I think we all are concerned about: a free and open Indo-Pacific is essential to each of our futures, our countries”. 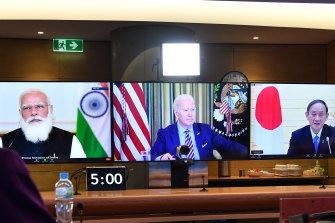 Japan’s Yoshihide Suga said “I do feel emotional about the development”. India’s Narendra Modi said the Quad would be “a force for global good”. Scott Morrison called it a “new dawn”.

Already, a former US national security adviser, Robert O’Brien, the top security aide to Donald Trump, has described the Quad group as the “most important relationship we’ve established since NATO at a high level”.

NATO bound the US together with Western Europe in a powerful military alliance that resisted the Soviet Union and won the Cold War. Could the Quad, which involves no military guarantees to anyone, possibly be in the same league?

It’s way too early to tell. The momentum is certainly all one-way at the moment. It was only three years ago that China’s Foreign Affairs Minister, Wang Yi, predicted that the Quad would “dissipate like the foam on the sea”.

It certainly didn’t look good. When the Quad – formally the Quadrilateral Security Dialogue – countries came together three years ago they were so worried about upsetting China that they sent only officials to meet, not ministers or leaders. They had nothing substantial to say. And the group was so timid that its meeting dared not even speak its own name.

Wang was not the only one who thought it would amount to nothing. Paul Keating said two years ago that “the so-called ‘Quadrilateral’ is not taking off”.

He explained why: “India remains ambivalent about the US agenda on China and will hedge in any activism against China. A rapprochement between Japan and China is also in evidence … so Japan is not signing up to any program of containment of China.“

But events moved so fast over the intervening two years that that not only did the Quad leaders meet by video link on Saturday, they also announced an immediate initiative to provide an extra 1 billion doses of COVID vaccine to needy nations and a four-part, longer-term work agenda. The Quad, said Modi, had “come of age – it will now remain an important pillar of stability in the region.”

Only one man could have achieved this transformation of the geopolitics of the Indopacific region, from ocean foam to a Coalition spanning two oceans in two years. Xi Jinping, China’s dictator.

“They are only there because of China,” says the Australian Strategic Policy Institute’s director, Peter Jennings. “Well done, Beijing.” 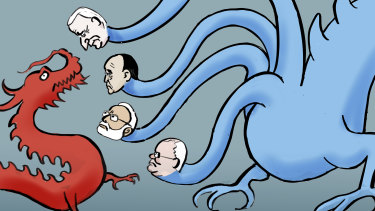 The vaccines outcome was “a stunning coup” in the words of Mike Green, an American Asia expert who served in the George W. Bush White House. Supplying an extra billion doses for nations of South-East Asia by the end of 2022 addresses their most urgent need. It gives the Quad a constructive first mission. And it pits the group against China in a game of vaccine geopolitics.

For the US, this is a big change from Trump’s “America First” mantra. “If we have to compete, at least millions of Asians and others in developing nations will benefit from it,” former US diplomat Bob Manning reflected.

The summit, says Mike Green, “should also silence the many critics of this grouping of countries”.

Green explains in the journal Foreign Policy that it had long been “en vogue for so-called realists to pooh-pooh the Quad as ideologically driven and overly provocative towards China. But then Chinese President Xi Jinping began bullying everyone.“

“With Washington’s credibility waning and its options limited, the Biden team just played its one high-value card to the greatest possible effect.”

So what next? The Australian military strategist Hugh White, one of the sceptics who’d thought the Quad would come to naught, concedes that he was wrong: “I don’t think you can call the first summit an insignificant event.”

However: “We are right to see China as a risk to Australia diplomatically and even strategically. So great idea, guys, but it’s not going to work.” For two main reasons.

First, because he thinks it’s too late. “This sounds like melodrama, but the South China Sea has been the Berlin of this new cold war,” he tells me. “The Soviets started to press the West at Berlin, and the West pressed back. In the end, the West convinced the Soviets they were willing to fight a nuclear war to stop them taking Berlin.“

But when Beijing started grabbing South China Sea territories from its neighbours starting with the Philippines, the US and its allies let them: “The Philippines said, do you mind if we borrow the Seventh Fleet for the weekend, and the US said ‘no’. China won”.

So Berlin has already been taken in the contemporary cold war? “They have taken a few suburbs at any rate,” says White.

Second, White argues that the Quad nations lack the will needed to halt China’s next steps. “Their joint statement showed just how nervous they were about declaring their purpose – the word China wasn’t mentioned.

“I’m pessimistic because what’s required will be very much like what was used to contain the Soviet Union. There has to be a very clear conviction to make it clear to Beijing that an attempt to change the status quo will be met with force.“

The Quad nations are too ambivalent, says White: “We all want to contain China, but none of us want to damage our relationship with China”, hoping for more trade and investment with Beijing as well as co-operation on climate change and other matters.

But just as the sceptics wrote off the Quad prematurely in the past, might they be repeating their mistake? China’s aggression forged the Quad. Further aggression from Xi could harden the Quad. History is in the making.

Prince Philip, 99, walks out of hospital after month stay recovering from medical procedure for pre-existing condition