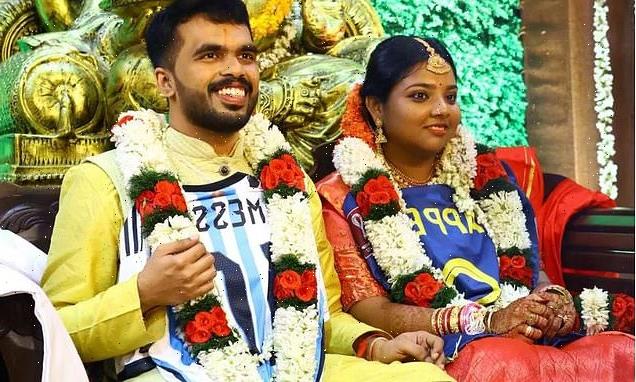 Wedding goals: Football mad Indian couple tie the knot wearing Messi and Mbappe shirts and race through ceremony so they could get home to watch the World Cup final

A football mad couple celebrated this years world cup by wearing Messi and Mbappe shirts to tie the knot at their wedding- the pair then raced home to watch the final.

Sachin R and R Athira didn’t want their wedding day getting in the way of their love for football and while they see eye to eye in most of their day-to-day lives they didn’t agree on what team to support.

Sachin is a dedicated fan of Argentina star Lionel Messi, while Athira is a super supporter of the French football team starring Mbappe.

The pair love the game so much that they didn’t opt for the tradition wedding dress and instead chose to wear French and Argentinian football shirts baring the names Messi and Mbappe. 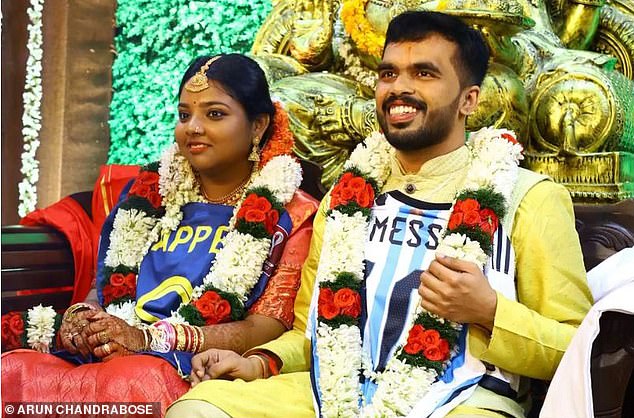 Hours before the two teams met in Qatar’s Lusail Stadium on Sunday, December, 18, they married each other in a ceremony held in Kochi city, Kerala, India.

They wore jerseys over their jewellery and traditional wedding attire.

Newspaper Malayala Manorama reported that the couple raced through their reception and wedding feast to make it back to Sachin’s house in Thiruvananthapuram- 128 miles away- in time to watch the final.

Kerala football fans have always distinguished themselves for their love for football- the Indian southern state has a high following for Messi and the country is recognised world-wide for their love of cricket.

Argentina won the final in a penalty shootout 4-2, giving 35-year-old Messi a chance to lift the World Cup trophy after won the adidas Golden Ball for Qatar 2022.

Across the state football flags and makeshift screens were set up which allowed fans celebrate together as Messi played his final game for the World Cup.

People gathered in their thousands to watch the game and while the Argentina sat comfortably at 2-0, France managed to bring it back for a short while until they were eventually defeated on penalties.