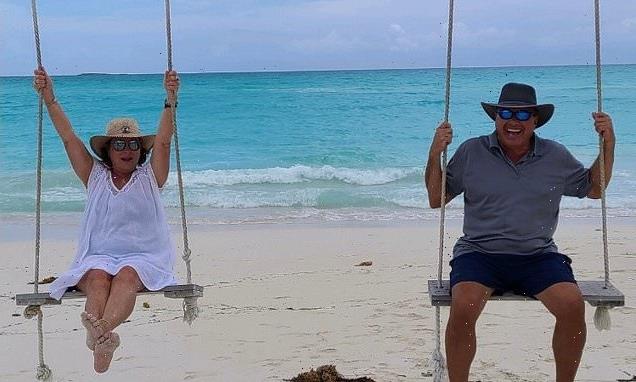 Florida man pictured in Bahamas days before he died

EXCLUSIVE: Florida tourist, 65, and his wife are pictured celebrating anniversary at luxury Sandals resort in the Bahamas days before he was killed by ‘faulty air conditioner’ and she was left paralyzed

A Florida man who was killed by a mysterious condition while at a Sandals resort in the Bahamas – and his wife who was left paralyzed – were pictured celebrating their anniversary just days earlier.

Vincent Chiarella, 64, from Panama City, Florida, died Friday morning at Sandals Emerald Bay in Exuma while on vacation with his wife Donnis, 64.

Donnis woke up to find herself paralyzed, and her late husband not moving, the couple’s devastated son Austin Chiarella told ABC News.

Another man and woman – both from America – also died, but have yet to be named. All victims are said to have suffered convulsions before their deaths. Another guest at the resort attributed the mystery condition to a faulty air conditioner that may have poisoned the couple.

Austin said: ‘She woke up and my dad was laying there on the floor, and she couldn’t move.

‘Her legs and arms was swollen and she couldn’t move and she screamed to get someone to come in the door.’

The stricken son said his mom had first fallen ill on Thursday, and visited a local clinic. She was discharged shortly afterwards, and believed her health had improved.

Donnis is now being airlifted back to Florida for further medical treatment.

Austin added: ‘I am just so heartbroken right now. My dad was everything to me.’

The State Department is ‘closely monitoring’ the Bahamas police investigation.

‘We are closely monitoring local authorities’ investigation into the cause of death,’ an official told USA Today. ‘We stand ready to provide all appropriate consular assistance. Out of respect for the privacy of the families, we have nothing further to add at this time.’ 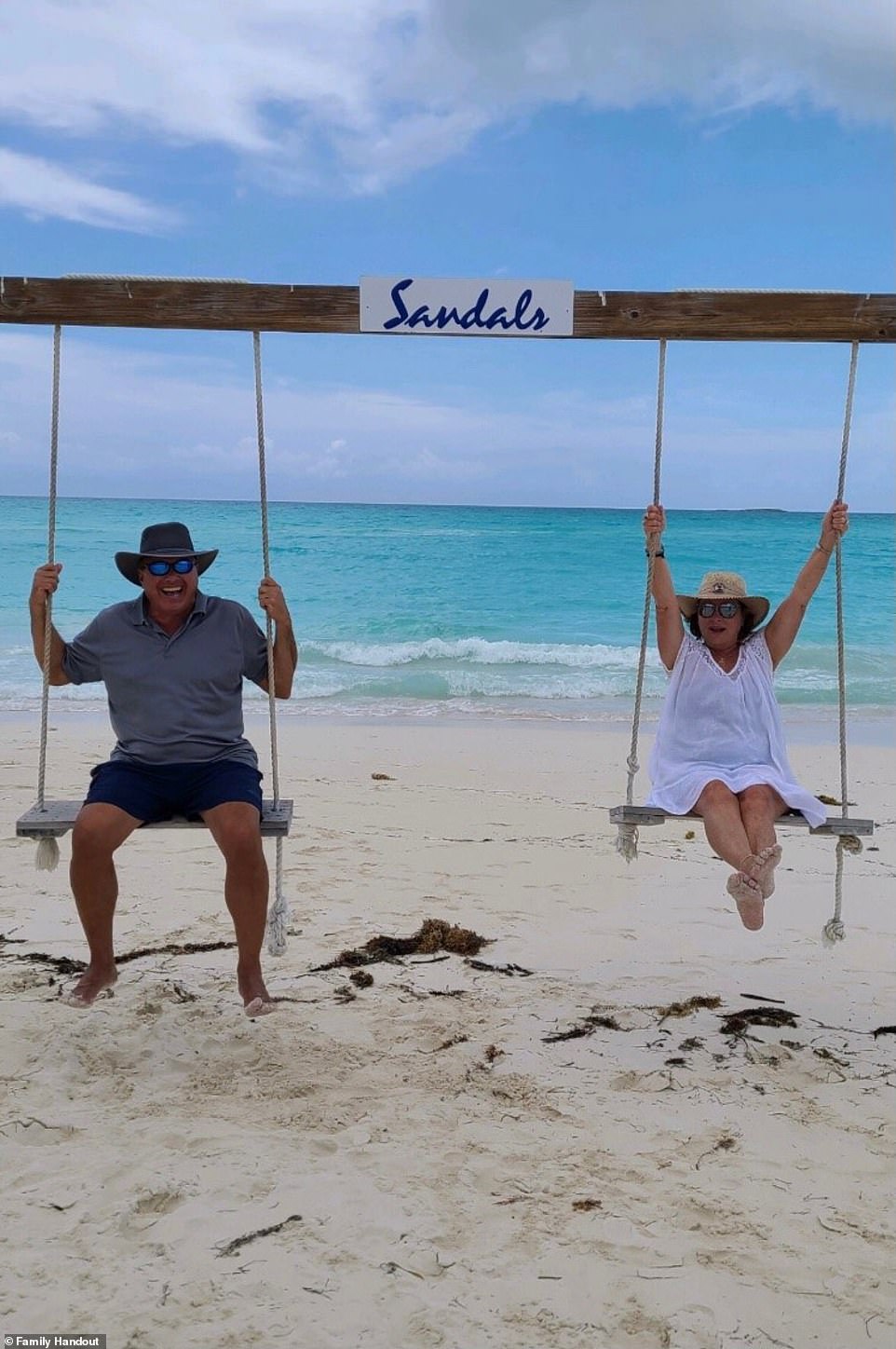 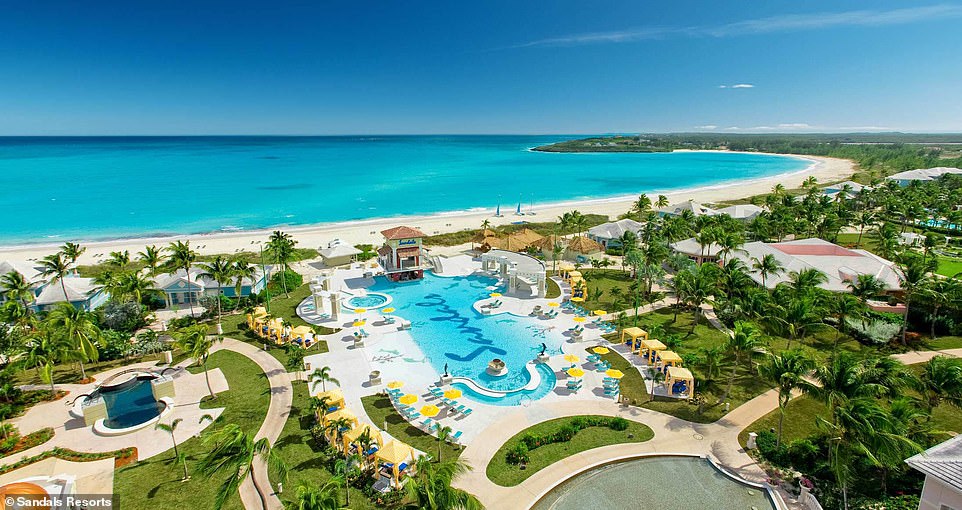 Two men and a woman have died at the luxury Sandals resort in Exuma, in the Bahamas (pictured). Another woman, a wife of one of the deceased, was stricken with an illness and has since been airlifted to a hospital in Florida

Meanwhile, another vacationer has shared dramatic testimony of what happened.

‘Three of our neighbors in the building right next to us died and a fourth was airlifted in critical condition early yesterday,’ a post to Facebook by Chris Coucheron-Aamot, who is currently vacationing at the Sandals Emerald Bay resort in Exuma, reads.

The post, which seemed to be penned by Coucheron-Aamot’s partner, describes a crime scene at the resort’s luxury beachside villas where the bodies of the guests – all confirmed to be American – were discovered by hotel personnel in at least two separate villas.

He added: ‘There was crime scene tape and security guards all around our unit,’ the post from Coucheron-Aamot, who was staying in the same villas as the stricken guests, reads. 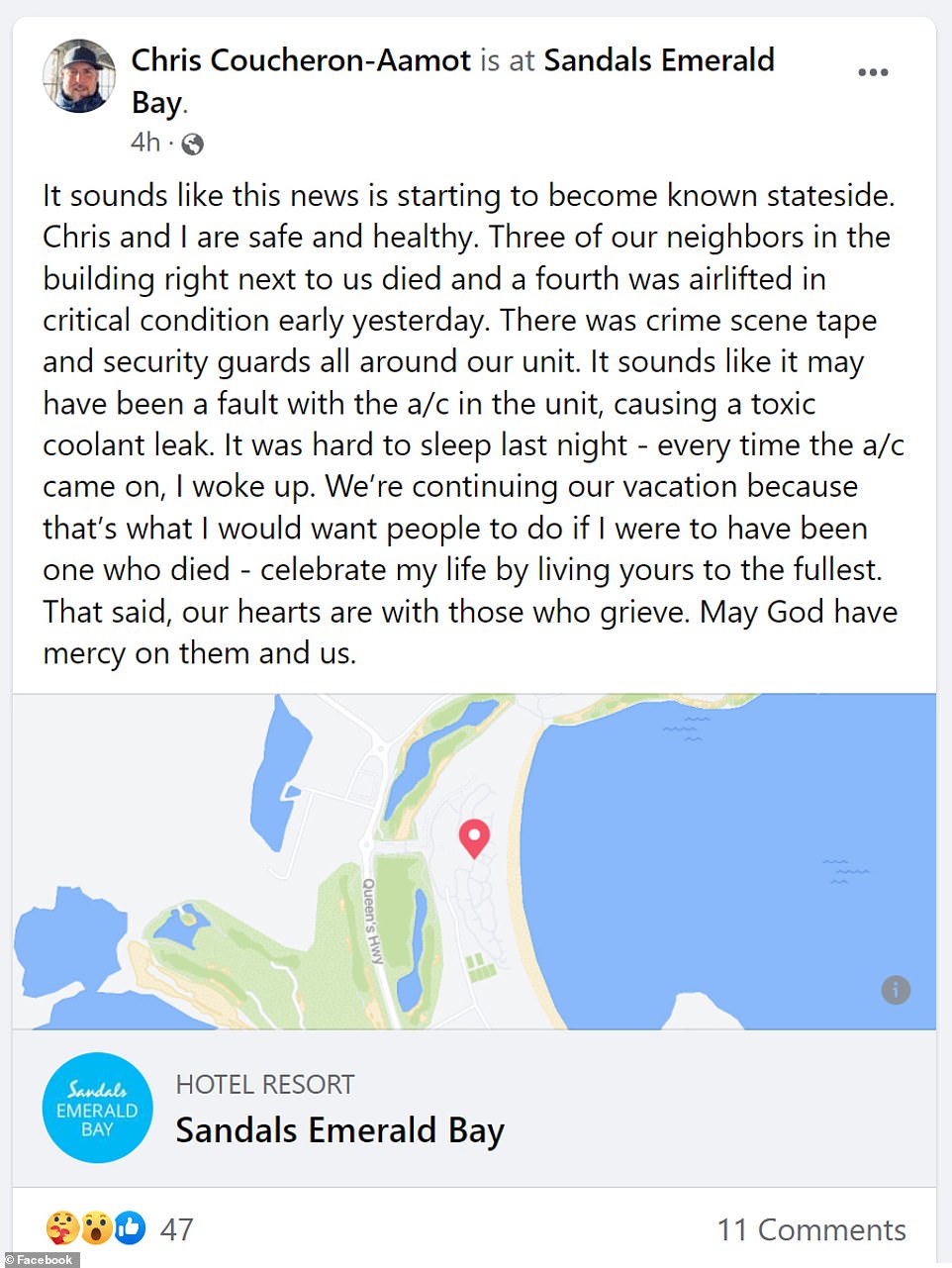 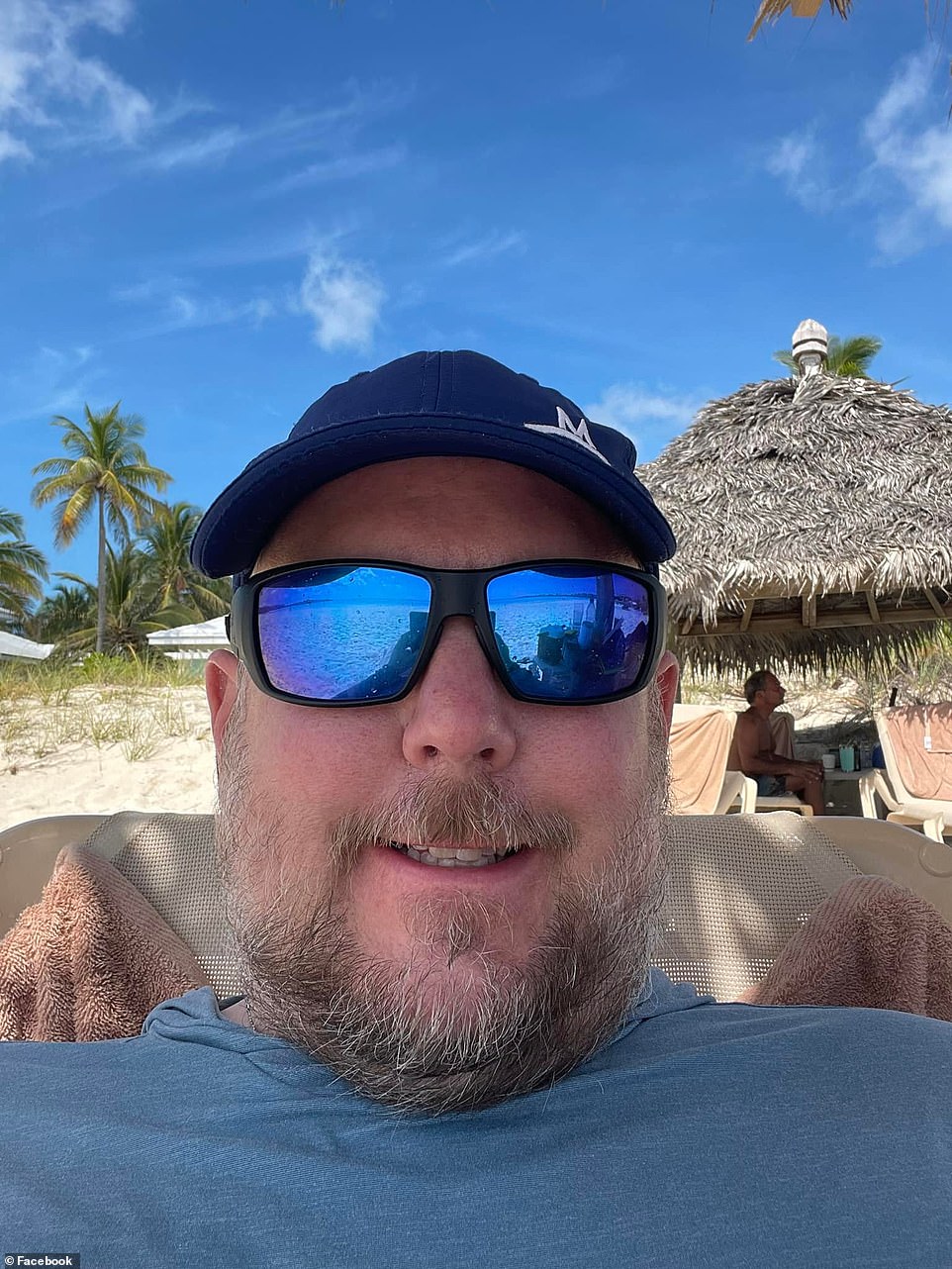 The post from New Mexico man Chris Coucheron-Aamot (pictured), who was staying in the same complex of villas at the ritzy resort, came as it was revealed that at least three of the stricken guests – who stayed in separate villas – complained of illness to hotel staff the night before their bodies were discovered

In the post, Coucheron-Aamot – who said he was continuing his vacation at the resort despite the deaths – suggested that there may have been issues with some of the villas’ air-condition systems that may have led to the deaths.

‘It sounds like it may have been a fault with the a/c in the unit, causing a toxic coolant leak,’ the post reads.

‘It was hard to sleep last night – every time the a/c came on, I woke up.

‘We’re continuing our vacation because that’s what I would want people to do if I were to have been one who died – celebrate my life by living yours to the fullest. That said, our hearts are with those who grieve. May God have mercy on them and us.’

What is Freon? The toxic chemical found in air conditioners

Air conditioners commonly use a chemical called Freon, which can prove toxic if inhaled, as a refrigerant.

The chemical is a stable, nonflammable, moderately toxic gas that is tasteless and mostly odorless.

Lung failure or death may occur with prolonged exposure to Freon.

Accidental poisoning from Freon, while rare, usually occurs in persons who work directly with cooling chemicals.

Symptoms of mild to moderate Freon poisoning include:

-irritation of eyes, ears, and throat

-bleeding or fluid buildup in the lungs

Photos posted to Coucheron-Aamot’s page chronicle his and another man presumed to be his partner’s stay at one of the ritzy resort’s villas, which ask guests pay nightly rates of up to $1227.

DailyMail.com reached out to Coucheron-Aamot Friday evening regarding the claims regarding the supposed fault a/c unit, but did not immediately hear back.

Most air conditioners use a chemical called Freon as a coolant, a moderately toxic gas that is tasteless and mostly odorless, and that can prove deadly if inhaled over a prolonged period of time.

Coucheron-Aamot’s claims come as police continue to investigate the deaths of the three American guests – two of whom complained of illness to hotel staff the previous evening.

An investigation by police discerned that those two guests, a couple staying at the same villa, suffered convulsions before their death.

‘Our initial investigations revealed that the couple found in the second villa complained of illness the previous evening,’ a statement released by New Providence police said.

‘They attended the local medical facility and on completion of receiving treatment, they returned to their lodging.’

Hotel staff came across the first body, Chiarella, shortly after 9 am Friday in a villa separate from that of the now-deceased couple, police said in their statement.

Officers at the George Town Police Station arrived on the scene shortly thereafter, where they were notified by hotel staff that another two guests – the couple – had been also been found unresponsive in another villa.

Police entered the first villa to find Chiarella lying on the ground with no signs of trauma, authorities said. The local doctor pronounced Chiarella dead at the scene.

Chiarella’s wife, Donnis, was then airlifted to a hospital in the capital city Nassau Friday morning, Exuma MP and Minister of Tourism Chester Cooper said.

She has since been airlifted to Kendall Regional facility in Florida, her son, Austin, who learned of his parents’ deaths after receiving a call from the US Embassy Friday night, told ABC.

After speaking to his mother, Vincent detailed to the outlet how she had found her husband Friday morning unresponsive on the floor, after also falling ill the previous

She told her son she had fallen ill on Thursday but ‘thought she was alright’ after visiting the clinic, he said.

‘I am just so heartbroken right now,’ Austin Chiarella said. ‘My dad was everything to me.’

In the second villa, an unidentified man was found ‘slumped against a wall in a bathroom’ and the woman on a bed, the Royal Bahamas Police Force said in a statement. ‘Both individuals showed signs of convulsion,’ police said, a

They added that no signs of trauma were found on either bodies.

An initial investigation revealed that the couple found in the second villa had ‘complained of illness the previous evening,’ cops said, adding that the pair ‘attended the local Medical facility’ where they received treatment, and then returned to their lodging.

Police are currently awaiting an autopsy report to determine the exact cause of death. They were working to confirm the identities of the other deceased.

In a statement to DailyMail.com Friday, a Sandals spokesperson said they were cooperating with police’s investigation. The rep did not address inquiries regarding claims over the reportedly faulty a/c unit.

‘Nothing is more important to Sandals Resorts than the safety of our guests,’ the rep wrote in an emailed statement.

‘A health emergency was initially reported and following our protocols we immediately alerted emergency medical professionals and relevant local authorities.

‘We are actively working to support both the investigation as well as the guests’ families in every way possible during this difficult time. Out of respect for the privacy of our guests, we cannot disclose further information at this time.’

Sandals said staff were alerted to a medical emergency and the victims’ families are being supported, she told the Mirror.

Mr Cooper said in a statement: ‘I have been regretfully informed today of the death of three American visitors, two men, and a woman, at a resort property on Exuma.

‘Another American woman has been airlifted to Princess Margaret Hospital.

‘I have been briefed by the commissioner of police and the resort’s executive management on the matter. I am currently in Eleuthera on ministerial business.

‘As I am acting in the capacity of prime minister, I have briefed Prime Minister Davis on the matter.

He continued: ‘Police are investigating and the cause of death is still unknown. 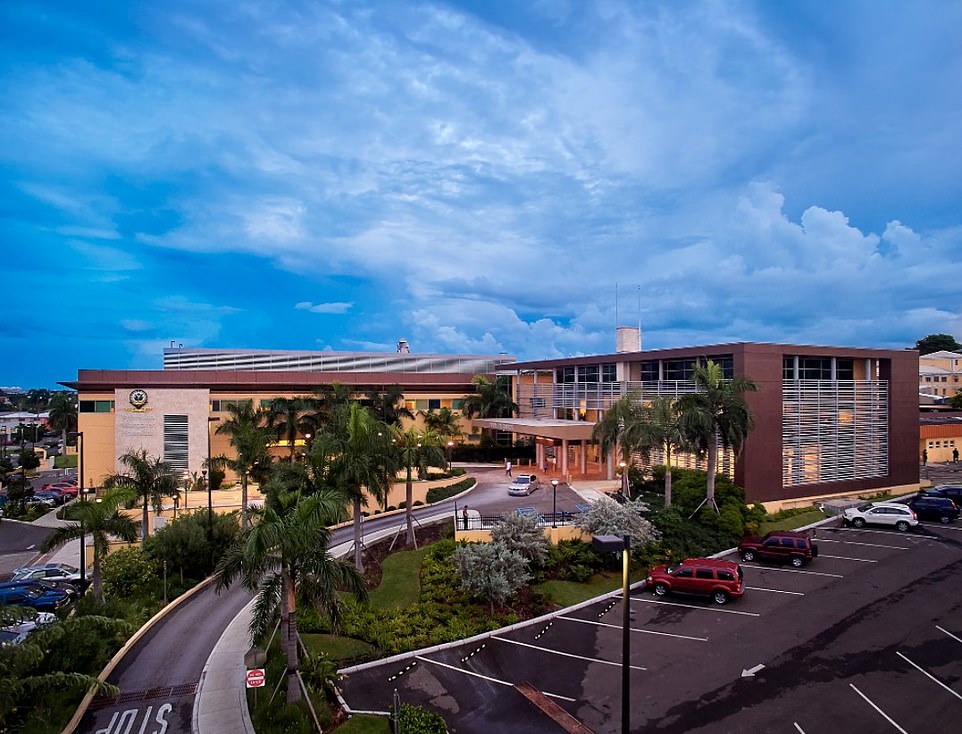 A fourth American, a woman, was airlifted to Princess Margaret Hospital (pictured) in the capital city Nassau, according to Exuma MP and Minister of Tourism Chester Cooper

He added: ‘The public will be kept abreast of information as soon as it becomes available. We offer our thoughts and prayers to the families affected.’

The luxurious five-star adults-only resort is all inclusive and sits in a secluded area within 500 acres of tropical land.

It has a mile-long beach, three pools, 11 restaurants and an award-winning golf course.

Guests are free to take part in day and night tennis, beach volleyball and basketball, paddle boarding, snorkelling, and even offer free weddings to people staying for three nights or longer.