Flights from Russia skyrocket to £8,000 with thousands fleeing mobilisation

Thousands of Russians have rushed to book extortionate tickets out of the country while they still can following Vladimir Putin’s ‘partial mobilisation’ announcement.

Flight tracker Flightradar24 posted a timelapse video showing a stream of one-way flights pouring out of Russia into Turkey, Serbia and the United Arab Emirates.

Following President Putin’s announcement that civilians were to be conscripted to go and fight in Ukraine, flights to countries which still offer visa-free travel to Russians sold out within hours, with prices skyrocketing.

Flights from Moscow to Dubai, which would have cost around £181 in January, have surged to more than £8,000 per seat.

A ticket to nearby Armenia will now cost the average Russian at least £1,000.

Data also showed that in the first few hours following Putin’s address to the nation, Google searches for ‘how to leave Russia’ became the highest-trending topic in the country.

Video emerged on Friday of a long line of vehicles stuck on a highway leading to Russia’s border with Kazakhstan. 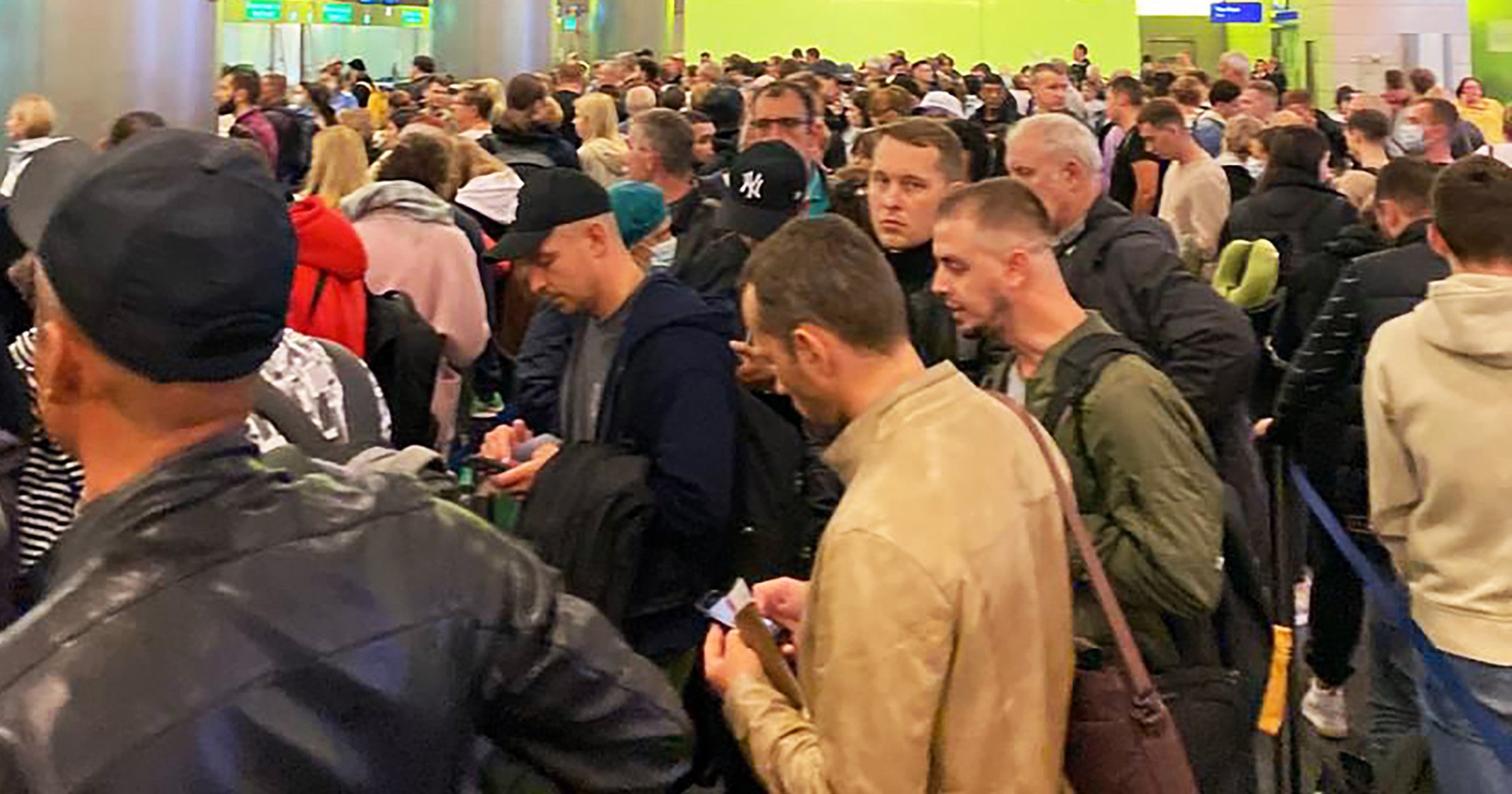 Border guards in Finland also reported heavy traffic along its southeastern border to Russia, adding that the number of Russians who entered the previous day was more than double the amount who arrived the week before.

About 7,000 people entered from Russia on Thursday, some 6,000 of them Russian, meaning a 107% increase compared with the same day a week earlier, according to the border guards.

A spokesperson said Friday’s queue was the longest at the busy Vaalimaa crossing, with cars lining up for about 500 metres, which was longer than on Thursday. Lines were also ‘longer than normal’ at the second-biggest Nuijamaa crossing.

Finnish land border crossings have remained among the few entry points into Europe for Russians after a string of countries shut both physical frontiers and their air space to Russian planes in response to Putin’s invasion of Ukraine.

Russia has seen an exodus of citizens since fighting began, with an estimated 300,000 people believed to have fled the country in March alone.

The result has seen The Kremlin aggressively step up their recruitment efforts, with reports of anti-war protesters and civilians being arrested in the street and forcibly ‘recruited’ to join the Russian armed forces.

There are fears that he may now shut the borders entirely.

Social networks in Russian also surged with advice on how to avoid the mobilisation or leave the country, with searches for ‘how to break your own arm’ reaching an all-time high.

A group based in Serbia – Russians, Belarussians, Ukrainians and Serbs Together Against War, tweeted that there were no available flights to Belgrade from Russia until mid-October. Flights to Turkey, Georgia or Armenia also sold out, according to the Belgrade-based group.

‘All the Russians who wanted to go to war already went,’ the group said. ‘No one else wants to go there!’