Fears of a SECOND tsunami in Indonesia as volcano erupts again, flights are diverted and death toll hits 430

Authorities in Indonesia have widened a no-go zone to three miles as the volcano alert status was raised to the second-highest level in response to the threat of further devastation.

Saturday's eruption caused part of the Anak Krakatau island to collapse into the Sunda Strait, generating 16ft tsunami waves that killed at least 430 in Java and Sumatra.

The government has warned people to stay half a mile away from the shore because another tsunami could be triggered by Krakatau's continuing eruptions.

A navy vessel is expected to sail near the island later today, which could give scientists more information about the risks of a second collapse.

Rudy Sunendar, head geologist at the energy ministry, said: "There's still a chance of a landslide, even under the sea level or on the sea level.

"Based on the satellite imagery interpretation, there is collapse of some area of Mount Anak Krakatau."

Experts have not been able to get a close view because of bad weather, he added.

But footage filmed from an aircraft today showed smoke and ash pouring from the summit, while satellite images showed half the island has vanished under the waves.

Tsunamis are normally caused by earthquakes, but can also be triggered by an enormous landslip such as in this case.

No big earthquake shook the ground before the eruption, and the waves surged inland at night on a holiday weekend while people were enjoying concerts and other beachside activities.

Horrifying video showed waves crashing through the stage at one gig, sweeping the pop band Seventeen into the crowd.

Three of the band died along with the wife of lead singer Riefian Fajarsyah, who was the only survivor. 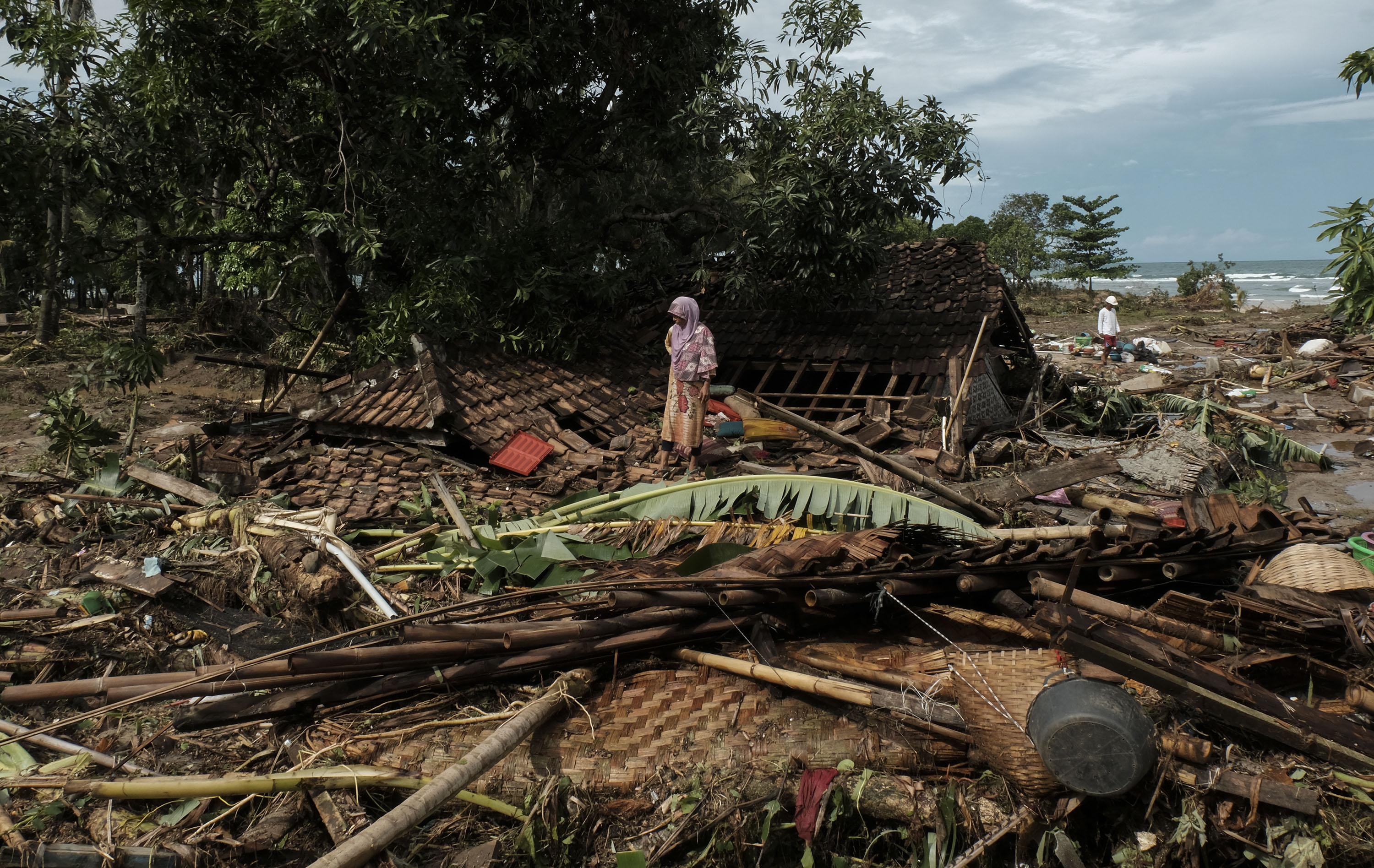 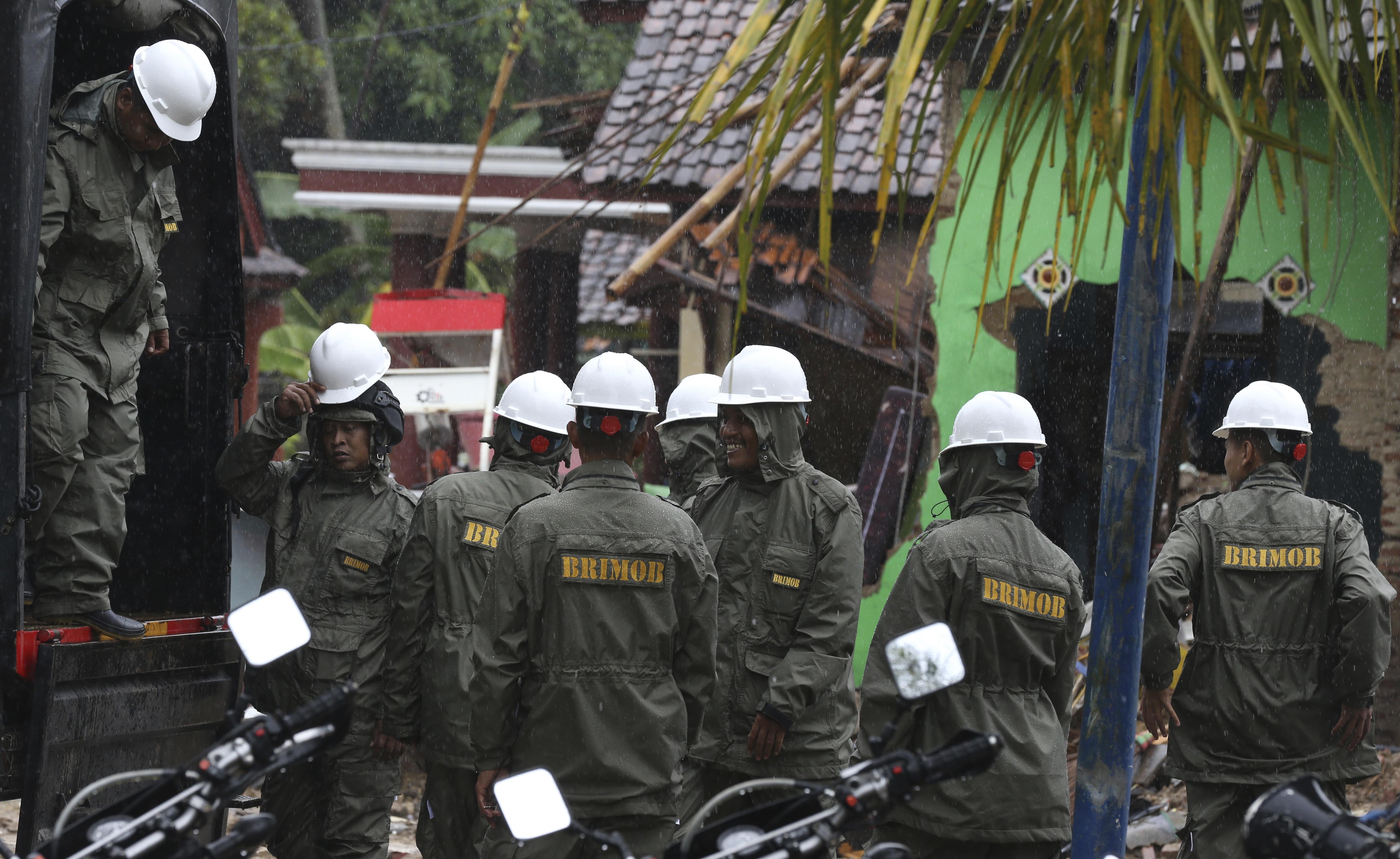 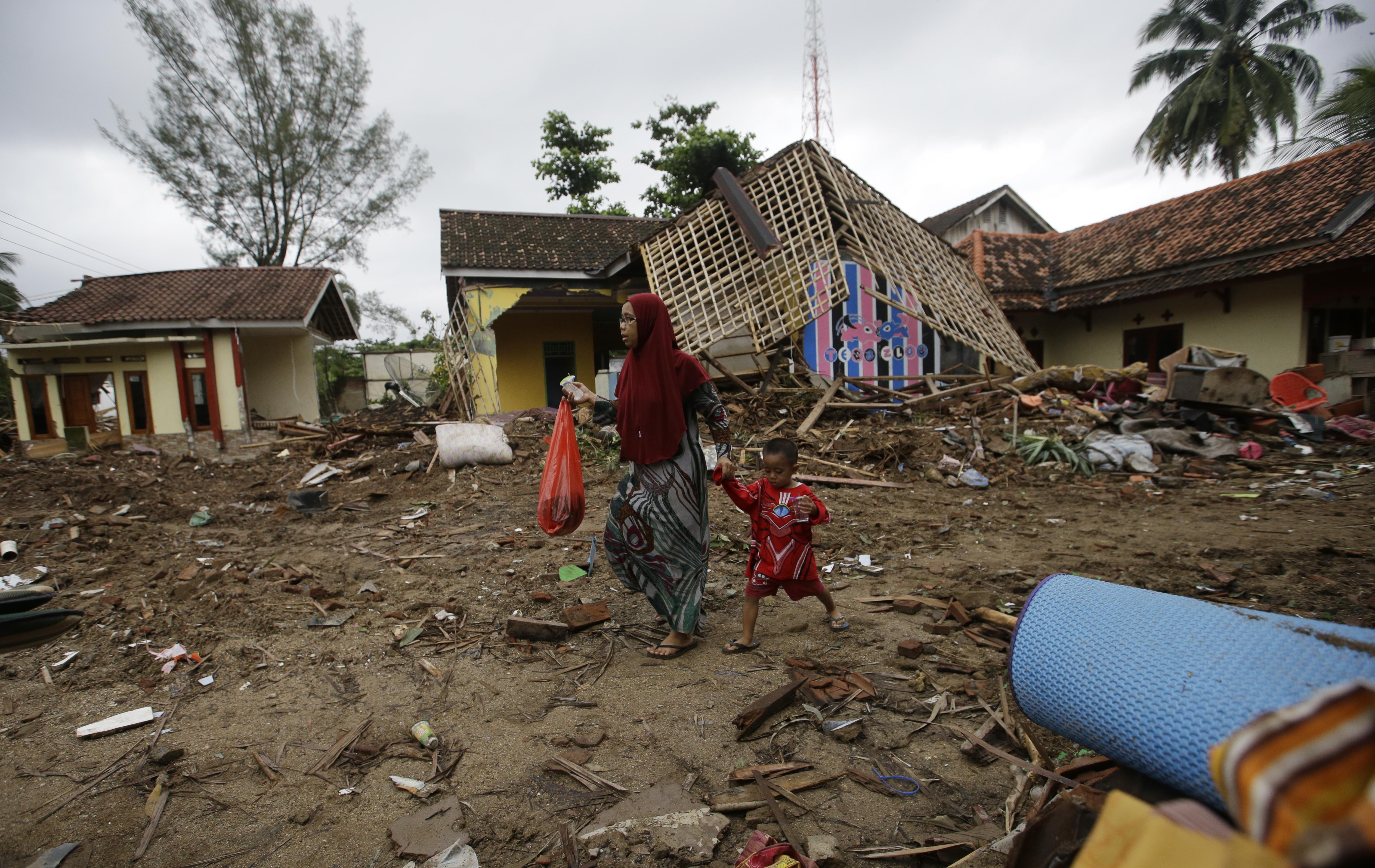 Rescuers who spent days scouring the rubble of shattered villages found a young boy alive in a rare story of hope amid the devastation.

Tearful Ali, five, was pulled from a car trapped under fallen trees after police heard his sobs.

At least a thousand people were hurt and the death toll is likely to rise as the more remote communities have not been reached and heavy rain hampers the search for survivors, authorities said.

Indonesia's tsunami warning system relies on land seismometers and buoys connected to tidal gauges and is not equipped to detect underwater landslides.

It also does not work because the buoys have been vandalised or not maintained because of low funding, according to reports.

President Joko Widodo visited the area on Monday and said a new alert system was needed. 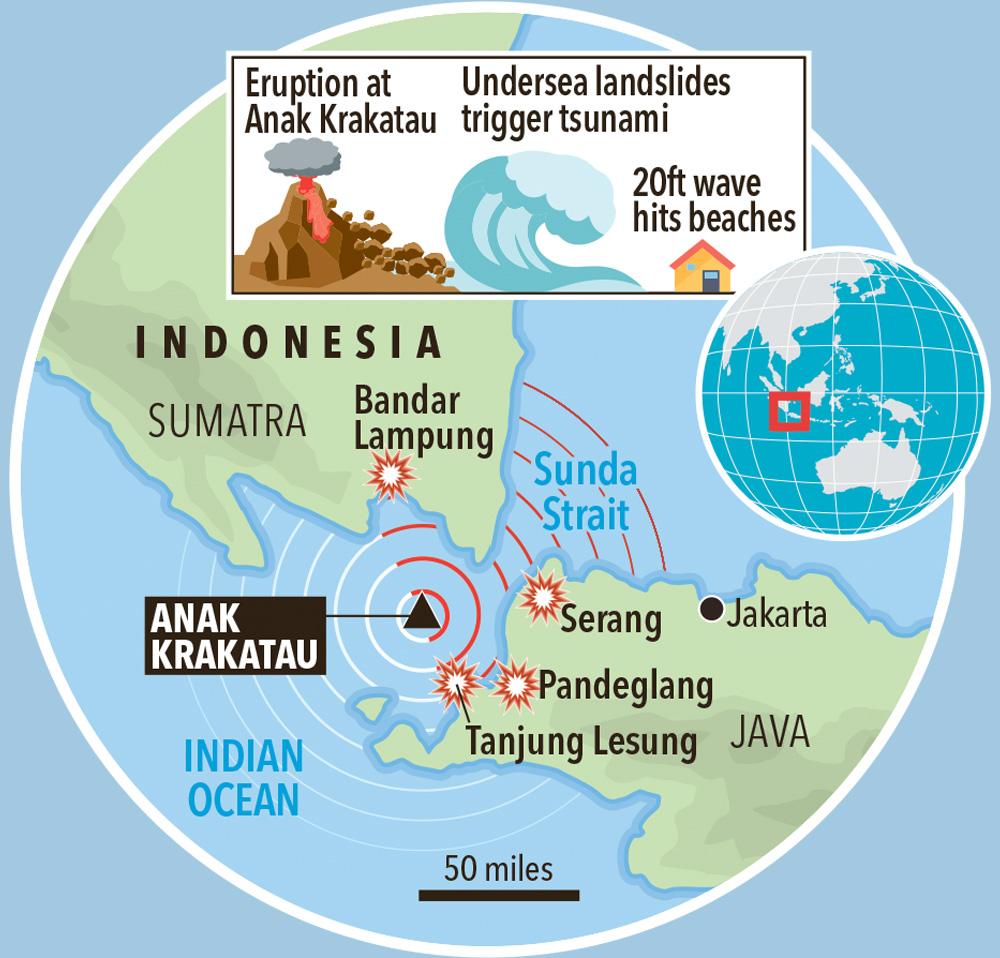 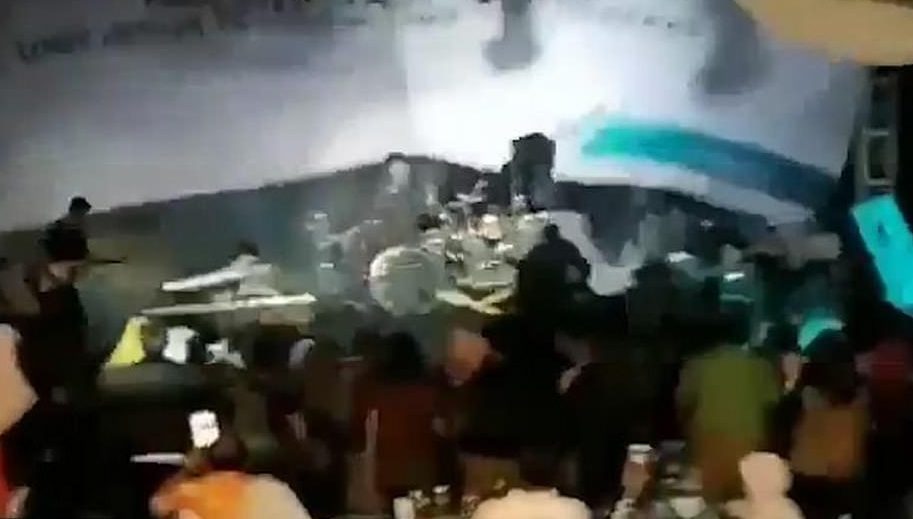 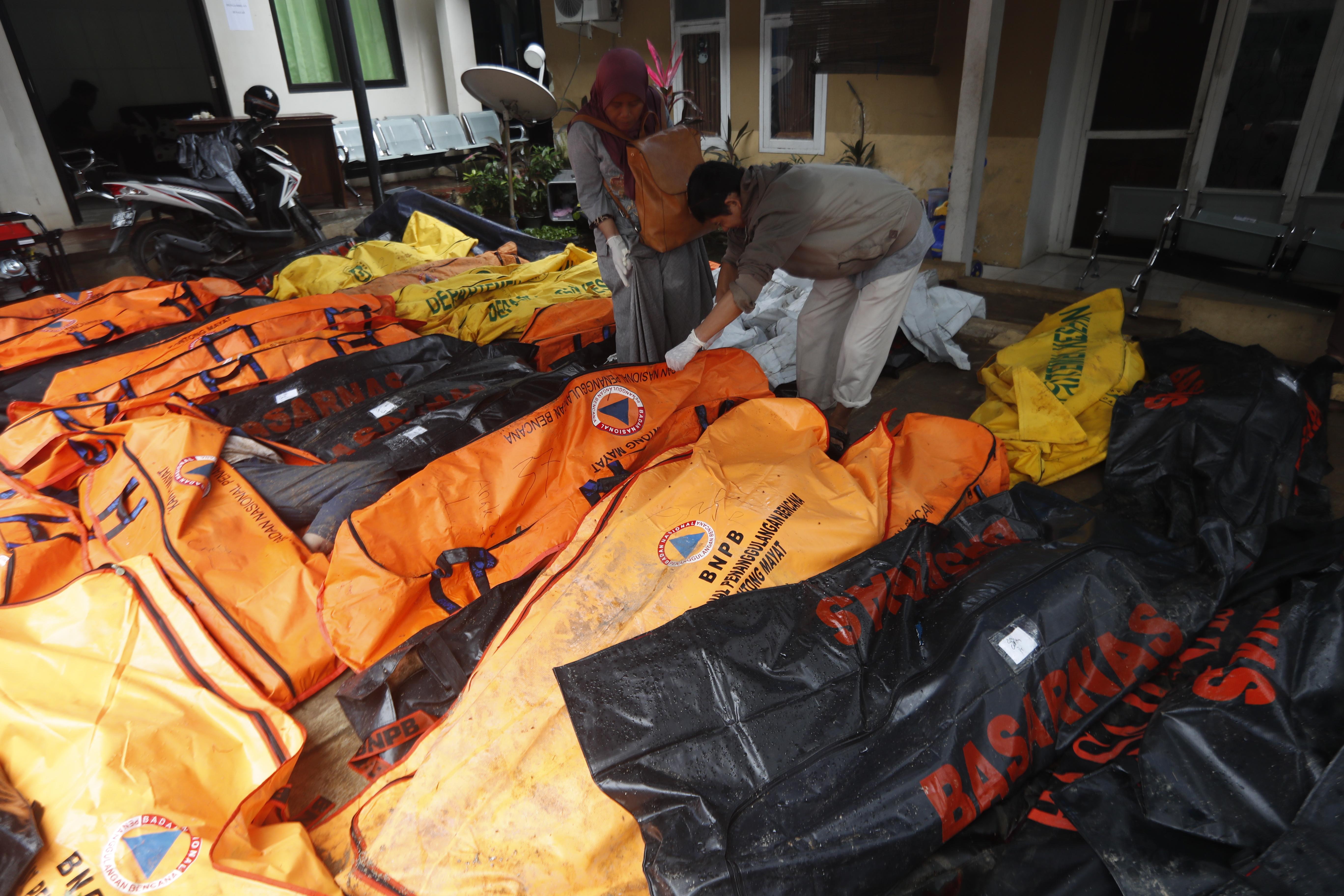 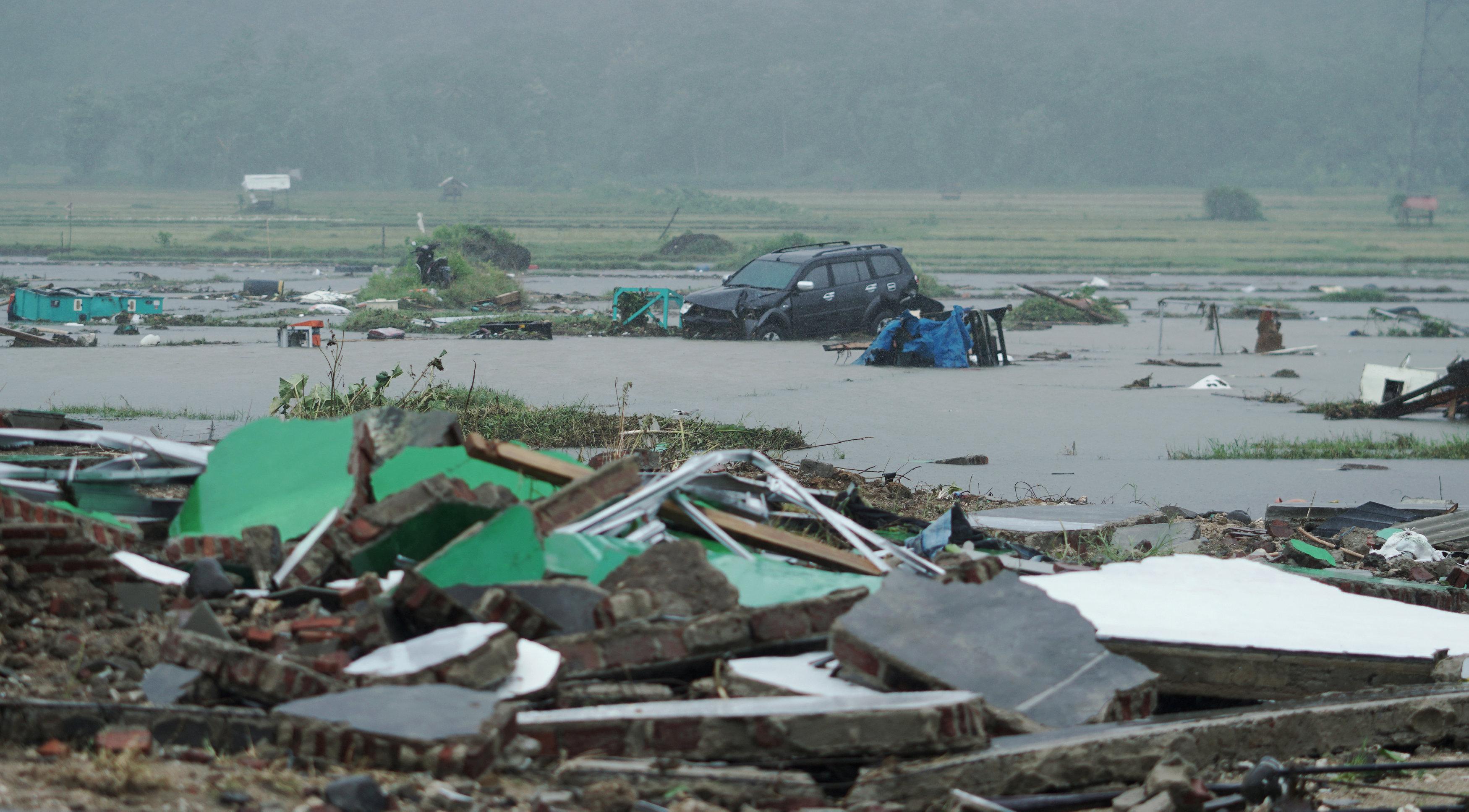 Satellite photos aren't available because of cloud cover but radar images from a Japan Aerospace Exploration Agency satellite taken before and after the eruption show the volcano's southwestern flank has disappeared.

JAXA's post-eruption image shows concentric waves radiating from the island, which experts say is caused by its ongoing eruptions.

The day the earth shook: The 1883 eruption of Krakatoa 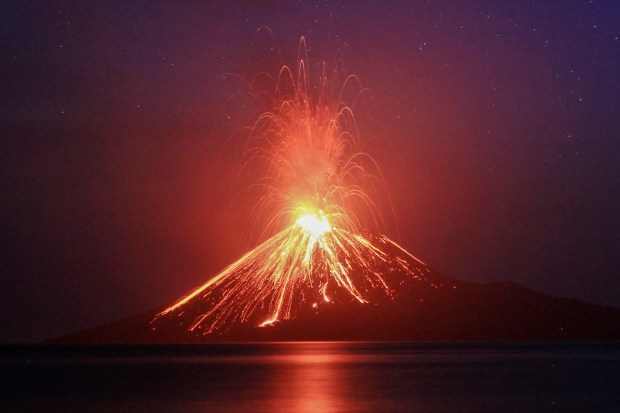 The explosion of Krakatoa sent tsunamis with waves up to 135ft across the ocean – killing more than 30,000 people.

Thousands more were suffocated by hot ash raining from the sky.

The eruptions were equivalent to 200 megatons of TNT – about 13,000 times the nuclear yield of the bomb dropped on Hiroshima in 1945.

They were also heard thousands of miles away – and are believed to be the loudest noises ever experienced in human history.

World temperatures dropped by more than 1C the following year due to the ash clouds in the atmosphere blocking the sun.

The volcanic island that Krakatoa stood on virtually disappeared.

Anak Krakatau, which means Child of Krakatoa, rose from the sea in 1929 and has been growing ever since.

Dave Petley, head of research and innovation at Sheffield University who analysed similar images from a European Space Agency satellite, said they support the theory that a landslide, most of it undersea, caused the tsunami.

He wrote in a blog: "The challenge now is to interpret what might be happening on the volcano, and what might happen next."

Anak Krakatau, which means Child of Krakatau, is the offspring of the famous Krakatoa volcano that darkened the skies across the world with a massive eruption in 1883.

Anak Krakatau first rose above sea level in 1929, according to Indonesia's volcanology agency, and has been increasing its land mass since then.

Clashes at the Atherstone Hunt in Market Bosworth