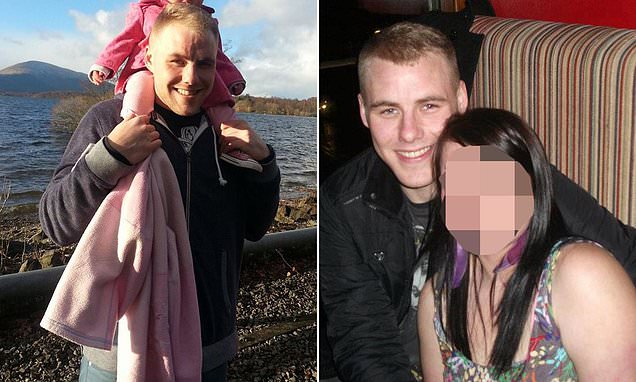 Father, 29, who punched and racially abused a schoolboy spared jail

Father, 29, who punched and racially abused a schoolboy, 15, in a fight that left his mother fighting for her life is spared prison after a judge accepted his claims it was a ‘heat of the moment’ attack

Dale Hart, 29, punched the teenager and pushed him into the road after he thought the boy brushed past his baby son’s pram in Bolton, Greater Manchester

A father who punched a teenager boy and called him a ‘black c***’ has been spared jail after a judge accepted he said the racist slur in the ‘heat of the moment’.

Dale Hart, 29, punched the teenager and pushed him into the road after he thought the boy brushed past his baby son’s pram while running for a bus in Bolton, Greater Manchester.

Hart, a customer services advisor with other previous convictions for affray, a public order offence, and drunk and disorderly, told the boy to ‘speak English’ as the boy waited for his mother and two sisters, aged 14 and 13, to catch up.

Punches were thrown by Hart and the boy’s mother, 39, suffered a potentially fatal bleed to the brain during the attack, where she underwent emergency surgery after spending three weeks in hospital.

The mother had been taking her family to a Sunday service at church and tried to break up the fight. It was on the bus she collapsed and was rushed to hospital.

Hart, from Breightmet, Bolton, claimed his attack on June 3 was not ‘racially aggravated’ and said the mother was ‘collateral damage’.

He claimed he confronted the boy after he brushed past his baby son’s pram.

In a statement, Hart said: ‘Words were exchanged solely on that aspect – not because of the colour of his skin – and I said to him something along to lines of ‘watch where you are going.’ An unsightly scuffle ensued and I accept that during it I punched him. I do not accept I intended to strike his mother at any point.’

Towards the end of the scuffle, Hart claimed he was being held back and was then he said “get off me you black c***.”‘

The boy suffered bruising and swelling to the face but did not suffer any major trauma. 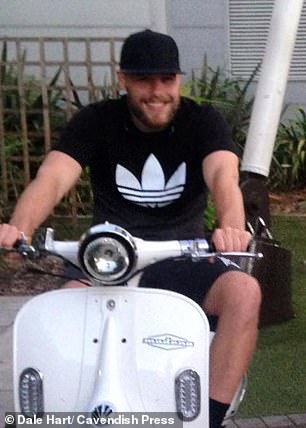 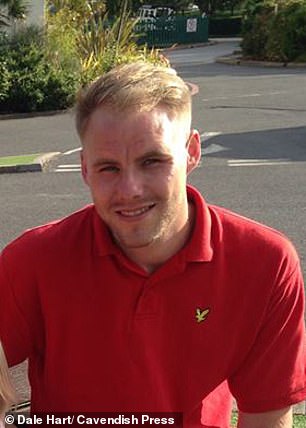 He was given a 12 month sentence suspended for two years and was ordered to complete 180 hours unpaid work.

Sentencing Judge Martin Walsh told him: ‘I want to make it absolutely clear to both you and the public that violence or disorder which is initiated and motivated by racial hostility will not be tolerated.

‘Had I been required to sentence you on the basis that the initial attack was initiated because of racial hostility towards him or to his family then an immediate sentence of imprisonment would have been imposed.

‘But your basis of plea indicates the confrontation was not initiated because of racial hostility, but that the racially aggravated comments were made after the struggle had ended and were made in the heat of the moment.

‘Had the initial assault been motivated by racial hostility, then the sentence that I am about to impose would have been very different.’ 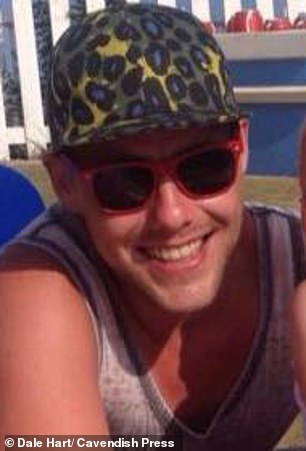 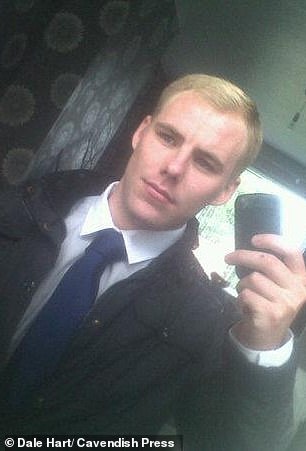 Hart also told the boy to ‘speak English’ during the altercation. He avoided jail and was given a suspended sentence

‘The mother managed to take hold of one of the defendant’s wrists but he shook his arms to try and get free and then pushed her away from him causing her to take a number of steps backwards.

He added: ‘During the incident, the defendant made a racist comment towards boy and that comment was heard by the bus driver.’

The mother was treated two acute subdural haematomas but experts said she was at greater risk of suffering a bleed on the brain as she had previously had kidney failure.

Hart’s lawyer Rosalind Scott-Bell said: ‘The defendant accepts that this was racially aggravated, but not racially motivated. He is genuinely sorry for his actions and the devastating impact this has had on the complainant and her family.

‘He is still struggling to understand what provoked his anger. He saw his child’s pushchair move to the side and made the wrong assumption that it was the boy.

‘He realises that it was his fault and that it was a misunderstanding. It was an event which was out of character.’

Ellen DeGeneres on why she (probably) won’t host the Oscars again: ‘It’s a thankless job’