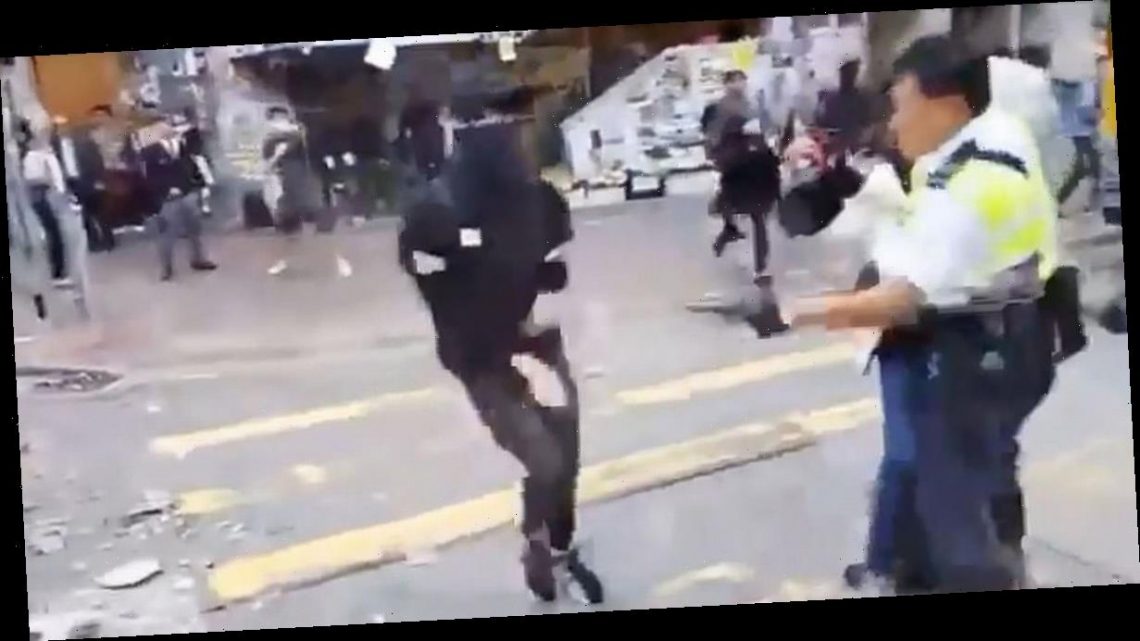 Hong Kong police have shot at least one protester and hit another with a motorbike as chaos erupted across the city, local media reports.

Shocking footage circulating on social media appears to show both incidents, which have taken place after six months of demonstrations.

Police fired live rounds at protesters on the eastern side of Hong Kong island today, injuring at least one, Cable TV reports.

Video footage shows an officer drawing his pistol and attempting to subdue a protester, before shooting another activist who reaches for his gun.

As the demonstrator falls to the ground, the policeman appears to fire a further two shots at another protester.

Another clip shows the an injured man lying in a pool of blood with his eyes wide open.

Police also pepper-sprayed and subdued a woman nearby as plastic crates were thrown at officers, the video shared on social media showed. Another video appeared to show a police motorcycle weaving through a crowd of protesters before slamming into an activist, knocking them to the ground.

Police said in a statement radical protesters had set up barricades at multiple locations across the city and warned the demonstrators to "stop their illegal acts immediately".

They did not comment immediately on the apparent shooting. Services on some train and subway lines were disrupted early on Monday, with riot police deployed near stations and shopping malls.

Many universities cancelled classes on Monday and there were long traffic jams in some areas. Police are now firing tear gas at protesters on the eastern side of Hong Kong, following the shooting earlier today.

The latest violence comes after a student died in hospital last week following a high fall as protesters were being dispersed by police.

Protesters are angry about what they see as police brutality and meddling by Beijing in the former British colony's freedoms, guaranteed by the "one country, two systems" formula put in place when the territory returned to Chinese rule in 1997.