Concerns have been raised over the rise in extreme right-wing (XRW) beliefs among young people, with the growth in the ideology driven by those under the age of 24.

In 2015, less than a fifth of those arrested for XRW terror offences were in this age bracket, but in 2020 this had risen to 60 per cent.

Last year 19 children under the age of 18 were arrested for terrorist offences, including 14 who were held over XRW views.

Since March 2020, UK police and the security services have foiled four late-stage terrorist plots – two XRW and two Islamist – and have made 185 arrests across more than 800 live investigations.

He said they are then ‘lured’ into ‘closed’ and ‘encrypted’ channels where they are exposed to ‘more extreme narratives and illegal material’.

The officer’s warning comes after the first British police officer to be convicted of belonging to a neo-Nazi terrorist group was jailed for more than four years.

Benjamin Hannam, 22, was last month found guilty of membership of right-wing extremist group National Action (NA) after it was banned in 2016 until September 2017, following a trial at the Old Bailey. 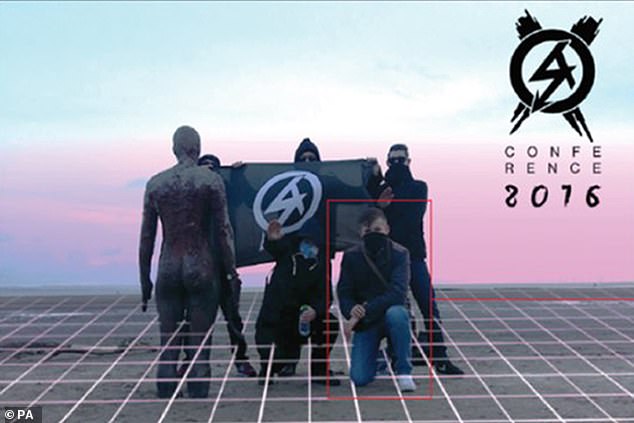 Far-right extremists are using memes and conspiracy theories on social media to lure young people into viewing terrorist material, police have warned. Pictured: Serving police officer Benjamin Hannam was last month found guilty of membership of right-wing extremist group National Action (NA). He is seen above posing next to a National Action flag in images shown to jurors at the Old Bailey

Deputy Assistant Commissioner Twist, who is the new senior national co-ordinator in UK counter-terrorism policing, said the amount of extremist material available online has increased during the pandemic, creating a ‘worryingly permissive environment’ for radicalised views.

‘We have warned throughout the pandemic that we are concerned that Covid-19 is creating an environment in the UK in which extremists will find it easier to identify, target and potentially radicalise young people or vulnerable people,’ he said. 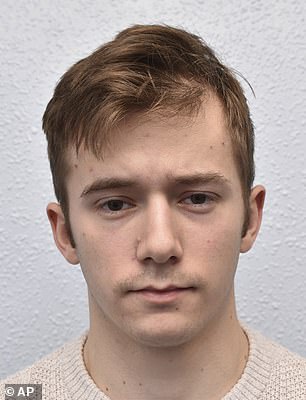 ‘It has done so by exacerbating the challenging circumstances and grievances within society that terrorists latch on to to promote their brand of hatred and extremism, such as economic inequality, or pre-existing divisions within communities.

‘It has stoked distrust in authority and inspired a new wave of conspiracy theories which have more easily reached the mainstream, such as those against 5G technology.

‘Most importantly it has made us all more isolated, making it more difficult for young and vulnerable people to access the support services such as mental health provision and social care which they rely on to protect them from extremist influence.’

Last year’s terrorist arrest figures were the lowest number since 2011, and the number of tip-offs received by the anti-terrorism hotline also dropped by nearly a quarter.

Police are urging the public to be vigilant as lockdown measures are eased and terrorists once again have the opportunity to target crowded places.

Deputy Assistant Commissioner Twist said: ‘While the rest of us have been focused on protecting ourselves and our families from Covid-19, terrorists have not stopped planning attacks or radicalising vulnerable people online.

‘Now that we are easing out of lockdown towards normality, we once again need the public’s help in tackling terrorism in all its forms – be that extremist grooming, dissemination of terrorist material or even attack planning.’

He added: ‘During the pandemic, during the various lockdowns that we’ve seen, the terrorist intent and capability has remained unchanged.

‘What has been missing to date has been the opportunity for some of those terrorists to transact whatever they might wish to do because there have been far fewer crowded places.’ 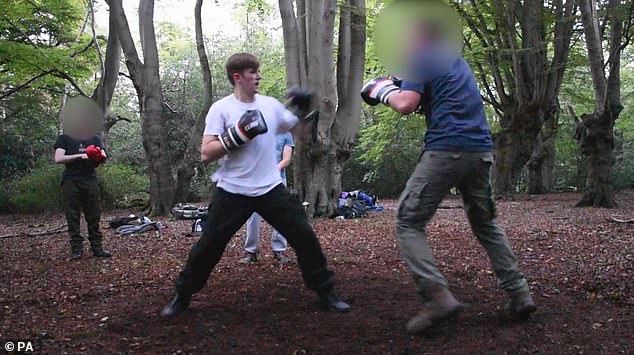 Deputy Assistant Commissioner Twist, who is the new senior national co-ordinator in UK counter-terrorism policing, said the amount of extremist material available online has increased during the pandemic. Pictured: Hannam seen during an outdoor boxing event in footage shown to the jury during his trial

The Mets’ Donnie Stevenson mystery has been solved
World News