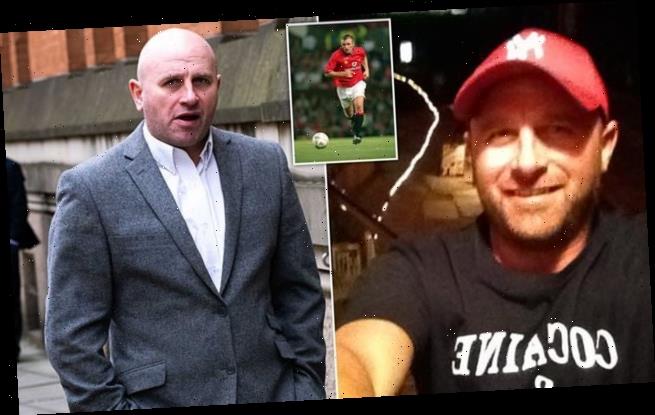 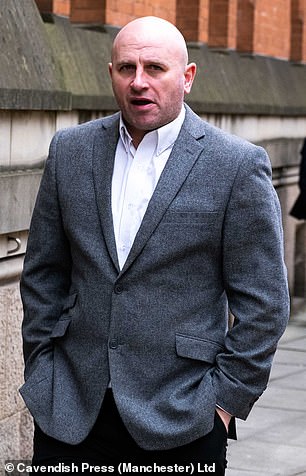 Former Manchester United footballer Ronnie Wallwork fractured a man’s eye socket in a drunken pub brawl after he was ‘mocked’ about the style of his brand new bright white trainers, a court heard today.

Wallwork, 43, punched Alan Mulholland in the face after accusing him of making derogatory remarks about his footwear and pointing at them during a night out on December 22, 2019, Manchester’s Minshull Street Crown Court was told.

In the moments before the ‘schoolyard-style’ assault at the Jam Works bar in Droylsden, Greater Manchester, Wallwork had taken off one of his trainers and held it in the air to show to his friends before attacking the victim.

Mr Mulholland needed three stitches for a wound to his face and suffered facial swelling and a bloodshot eye. He was also headbutted by one of Wallwork’s friends during the 25-second fight.

Wallwork, from Failsworth, near Oldham, admitted causing grievous bodily harm and was sentenced to 18 months jail, suspended for two years and ordered to complete a ‘Better Solutions’ rehabilitation programme.

He was also ordered to complete 200 hours unpaid work and pay Mr Mulholland £500 in compensation.

Sentencing Judge Tina Landale said: ‘An argument started with your victim which led to you both losing your tempers in a brutal attack on your victim.

‘It started when the victim was head butted by Mr Garner and was followed by punches from Mr Wallwork, the force of which knocked him back and caused him to fall. The incident was somewhat sustained lasting 25 seconds.

‘It has had a long lasting effect on your victim leaving him with a fractured eye socket and bruising. The head but was used as a weapon and the assault was aggravated by the fact it was in a pub and was committed under the influence of alcohol. 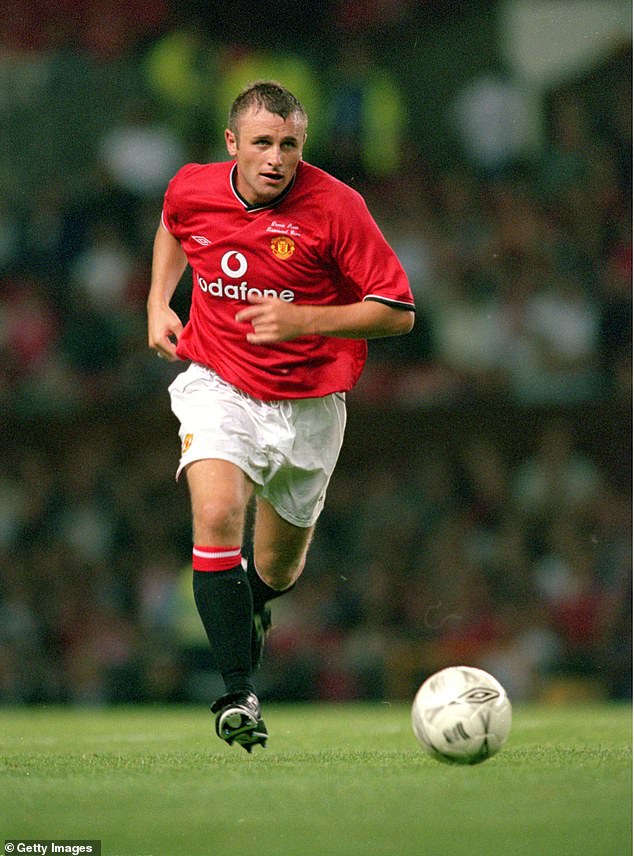 Ronnie Wallwork of Manchester United in action during the Denis Irwin Testimonial match against Manchester City at Old Trafford in Manchester, August 2000

‘You are both remorseful and are sorry for what you did and are not just sorry got yourself as is so often expressed in this court. This was out of character for both of you and you are both hardworking men.’

‘During the course of the evening Mr Mulholland chatted to the defendants,’ said Brendan O’Leary, prosecuting.

‘There appears to have been some conversation during the evening about the trainers that Mr Wallwork was wearing.

‘Mr Wallwork was seen to approach Mr Mulholland, lean forward and point at his trainers and there appears to be some short exchange of words in which Mr Mulholland points towards Mr. Wallwork’s trainers.

‘Mr. Wallwork then moves back to the area of the bar he had come from but was seen pointing again towards Mr Mulholland.

‘It appears something may have been said by Mr Wallwork at this stage as Mr Mulholland raised his hands and clapped in the direction of Mr Wallwork.

‘Mr Mulholland then pointed towards Mr. Wallwork’s trainers. Mr Wallwork then took off his right trainer and held it up to Mr Garner and another man he was speaking to. Mr Mulholland joined the group and he and the other man put their arms around each other.

‘But there then appears to be a conversation about Mr Mulholland’s trainers as Mr Garner leans down to examine them.

‘Mr Garner and Mr Mulholland then lean in as if to speak but without warning Mr Garner headbutted Mr. Mulholland with force to the left side of his face. Mr Mulholland stumbles briefly and went back to his table but both defendants approached him with Mr Garner leading the way with his right fist raised.’ 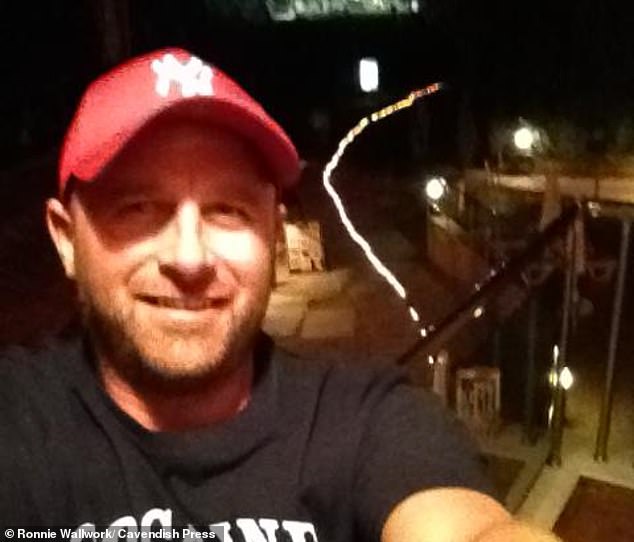 Wallwork, from Failsworth, near Oldham, admitted causing grievous bodily harm and was sentenced to 18 months jail, suspended for two years

Ex-Premiership midfielder Wallwork was arrested on May 21, 2020 but told police he had felt ‘threatened’ by Mr Mulholland who was ‘mocking him about his clothes.’

He accepted he had punched the victim but only after seeing one of Mr Mulholland’s friends punch Garner.

In a statement Mr Mulholland said: ‘I had to take 18 days off work and lost £4,000. I constantly think about the incident which has left me depressed. I have lived in Droyslden all my life and nothing like this has ever happened to me. I never thought I would be assaulted just going for drinks at a bar. I am always looking over my shoulder and am worried about this happening again.’

In mitigation for Wallwork, who has a previous caution for battery, defence lawyer Alex Langhorn said: ‘He was a young man of much promise who passed his GCSEs and started a football career that was his life.

‘He has the best opportunities playing for Manchester Utd and other teams. However his football career did not bring him all he hoped. Unlike some footballers in the news he never chased a celebrity lifestyle.

‘An ex-partner of his partner stabbed him which had a catastrophic effect on his life. It stopped him working and made him more reliant on savings and family. He got into debt and sold his previous home.

‘Before getting employment nine months ago he seemed to have no real future and nothing to look forward to beyond his relationship with his partner. He thought that had changed and that he was moving forward when he started a job delivering items as a key worker during the pandemic. He was building something for himself and all that has gone.

‘He realises he made a stupid mistake and should have walked away from the incident. He bitterly regrets his actions. He does have hope for the future and new offers of work potentially available to him.’

Wallwork who also won four caps for England under-20s in 1990s joined Manchester United’s academy in 1993 as a 16-year-old and was crowned the club’s Young Player of the Year in 1996.

He made his debut for Manchester United in 1997 playing alongside Ryan Giggs and David Beckham and earned a Premier League title winners’ medal for the 2000-01 season having made 19 appearances for Sir Alex Ferguson’s team.

But in 2007 his football career was forever tarnished when he was stabbed outside a nightclub in Manchester City centre in a vicious row over a girlfriend. He spent ten days in hospital being treated for wounds to his hand, back and stomach.

He moved to West Bromwich and Sheffield Wednesday but his football career never recovered. in December 2011 he was jailed for 15 months for hatching an illegal vehicle-breaking plot where he sold on parts from stolen cars.

His crimes came to light when undercover police were carrying out surveillance in Preston in an attempt to track down two career criminals who had shot a Tesco security guard during an armed raid at a supermarket.

Officers tracked one of the suspects to a scrapyard in Manchester where Wallwork was seen driving a Volkswagen Touran with cloned number plates. He was caught selling a stolen car engine to German man, who had seen it advertised on Ebay.

Every Movie Delayed Due to Coronavirus: Find Out the New Release Dates
World News