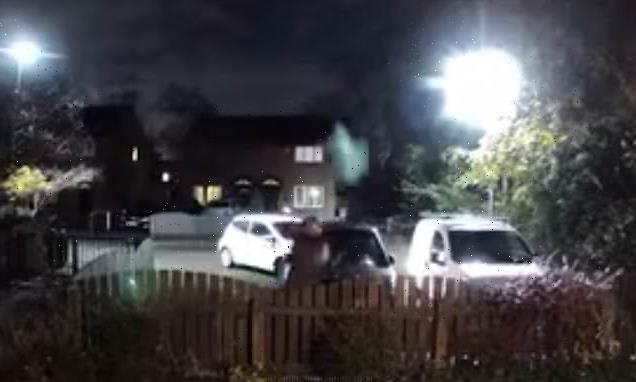 Evri has apologised after a courier hurled a parcel 20ft across a customer’s garden instead of just walking through the gate.

The 35-year-old’s mum, Lynne Jones, was alone in her house in Winton, Greater Manchester, when she heard a loud thud against her door.

CCTV footage shows what appears to be an Evri courier pacing outside the entrance to 65-year-old Lynne’s house looking for the door.

He initially considers placing the parcel on the ground below the fence.

However, he quickly changes his mind and decides to toss the item like a frisbee towards her home, where it ricochets off the the door and falls to the ground.

The driver then takes a picture of his delivery attempt before turning round and walking back to his car as the clip ends.

Mr Jones shared the video on Twitter on Sunday, writing: ‘When Evri chuck your parcel without a care in the world! #scum.’

Speaking today, insurance loss adjuster said: ‘I was shocked that someone could be that careless with a parcel that she has spent her hard earned money on.

‘The delivery person shown no regard what the parcels content at all. The bang of it hitting the door also shocked my mother who lives alone.

‘Without online shopping that delivery driver would be without a job.

‘No attempt was made, it looks as though they went the wrong way and then decided to leave it before just chucking it at the door.’ 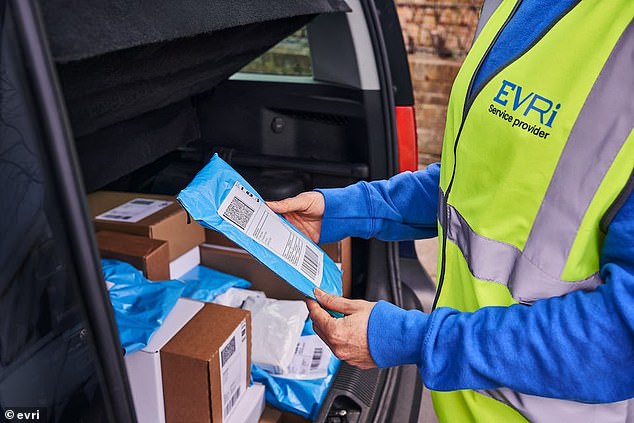 A spokesperson for Evri said: ‘We have spoken to Mrs Jones to apologise for this delivery and provided her with a good will payment of £50.

‘Our local team have spoken to the courier involved about our required delivery standards to ensure this doesn’t happen again in the future.’

Evri were recently named the worst performing delivery company in the UK for the second year running as part of the second annual parcel league table by Citizens Advice.

Alongside other major parcel delivery firms, they were scored against criteria including customer service, parcel problems and accessibility needs, such as people needing longer to answer the door.

The company, formerly known as Hermes, scored just 1.75 stars out of a possible five, finishing in last place behind Yodel, DPD, Amazon Logistics and Royal Mail.