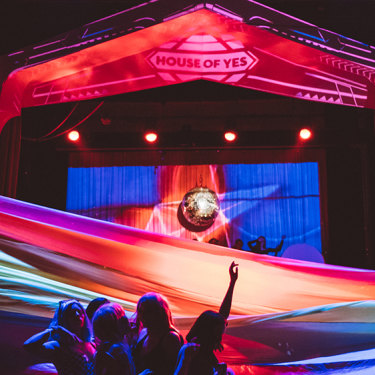 The House of Yes nightclub in Brooklyn before the coronavirus pandemic. Credit:Kenny Rodriguez

Anya Sapozhnikova remembers the moment the magical world she had created began to crumble. It was March 11 last year. House of Yes, the Brooklyn nightclub Sapozhnikova runs and co-owns, was holding its regular Wednesday night “Dirty Circus” party. Aerial acrobats twirled in the air as jugglers and contortionists performed on stage. As per usual, a lucky audience member got to watch the show while soaking in a bathtub.

From its humble origins as a “hippie-punk squat house”, House of Yes had grown to become one of New York’s coolest nightclubs, famous for its immersive, high-concept parties. In 2018, Time Out ranked a visit to House of Yes second on its list of the 50 best things to do in the world.

On this night, though, the club was only a third full. The air prickled with tension. “It felt like a blizzard was keeping everyone away,” Sapozhnikova recalls. 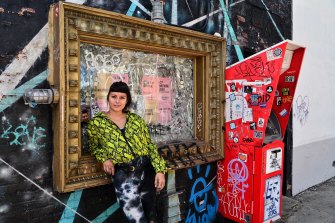 Anya Sapozhnikova outside House of Yes in Brooklyn. Photo by Kevin JacksonCredit:Kevin Jackson

House of Yes reopened in summer as an outdoor bar, but it didn’t end well. State authorities suspended the venue’s liquor licence for breaching new pandemic operating rules. Among the violations: they were serving food from a sister restaurant next door rather than House of Yes itself; and the music was too loud.

By October, Sapozhnikova had sunk into what she calls a “deep depression”. Her days, previously filled with creative collaboration, were now devoid of structure and purpose. She found it to impossible to get out of bed to charge her phone.

“I didn’t start a family, I didn’t build a life outside of this,” the 34-year old says.

“It felt like every single thing I loved was stripped away.”

After an intervention from concerned friends, she checked herself into a mental health facility in Tuscon, Arizona, and stayed for a month. She returned to New York in a better state of mind and with renewed determination that the sweaty bodies and pounding music would again return to House of Yes. 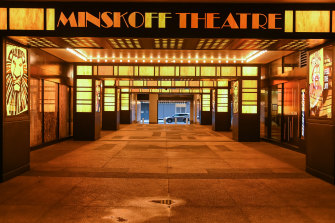 Broadway’s foyers have been empty since March 2020.Credit:Getty

This time a year ago, New York was the epicentre of the US pandemic. The city’s hospitals were overflowing with COVID patients and many New Yorkers were too scared to walk outside their apartments. An estimated 31,000 people in New York City have died of the coronavirus.

Wander around New York’s streets today and you find a city scarred by trauma but bursting with hope. Powering the optimism is the arrival of spring and the rapidly advancing COVID-19 vaccination rollout. One in three adult New Yorkers have now received at least one vaccine dose – among them Sapozhnikova, who got her first jab last week.

National media outlets are pumping out articles predicting “the best summer ever”. Others are heralding the arrival of a bacchanalian post-pandemic age on par with the roaring 1920s. Health experts fear the city may be letting its hair down too soon: after several months of impressive declines, coronavirus cases in New York have bounced back to around 4000 new cases a day.

Yet New York’s cultural life is gradually awakening from its slumber. You can visit the Metropolitan Museum of Art again and go to the movies. Indoor live performances are starting up, albeit often in a COVID-constrained way.

On Saturdays at Sidedoor, a bar in Midtown Manhattan, you will find drag queen Champagne Bubbles lip-synching in a plastic face shield to Kylie Minogue as customers eat brunch. 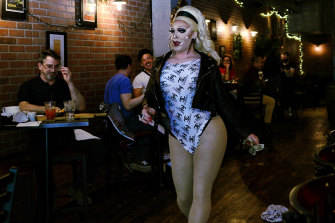 On April 2, the curtain will rise on a new phase in the city’s return to normality when when concert halls, theatres and other entertainment venues are allowed to re-open for the first time since the pandemic began. Good Friday may seem an odd day for a resurrection, but so it goes.

The Shed, a performing arts centre at the glistening Hudson Yards development, is re-opening on April 2 with a series that includes performances by the The New York Philharmonic Orchestra, Grammy Award-winning soprano Renee Fleming and comedian Michelle Wolf. Only around 150 people, wearing masks, will be allowed in the 1300-seat theatre. They will need to provide proof of a negative COVID test or a vaccination.

A week later the Park Avenue Armory, a cavernous venue on Manhattan’s Upper East Side, will launch a “social distance dance club” in which participants boogie in their own spotlights while listening to pre-recorded instructions from Talking Heads singer David Byrne. Tickets to the “solitary participatory experience” quickly sold out, a testament to the pent-up demand for in-person cultural experiences.

The initial 33 per cent capacity limit means it doesn’t make financial sense for many venues to open right away. Sapozhnikova says House of Yes plans to return in the summer with outdoor parties, before eventually re-opening its indoor dance floor.

Across the East River from House of Yes, Gabe Waldman apologises for Stand Up NY’s appearance. The comedy club Waldman co-owns on Manhattan’s Upper West Side was already a bit dingy in pre-corona times. It’s been sitting dormant for over a year.

Despite its reputation as a comedy capital, New York only had about a dozen comedy clubs. Founded in 1986, Stand Up NY is one of the city’s oldest. Louis C.K, Amy Schumer and Jon Stewart are among the comedians who performed there. Chris Rock tested out new material out at the club before hosting the 2012 Academy Awards.

When New York went into lockdown, the club’s owners were determined to keep the show going – even if it meant pushing the limits of what was allowed. 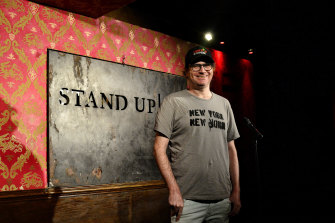 Gabe Waldman at the Stand Up NY comedy club on the Upper West Side. Photo by Kevin JacksonCredit:Kevin Jackson

Their priority was live performance. “Why would someone want to pay $10 to watch a comedy show on Zoom when they have Netflix?” Waldman says. So they organised shows in Central Park and on rooftops in Brooklyn. They held drive-in shows at Coney Island. When churches reopened, they held a controversial performance inside a nearby Methodist Church. As temperatures dropped they went underground – literally – by organising shows on the subway.

Along the way the club ended up in a very public feud with one of the most famous comedians in the world, Jerry Seinfeld. It started in August when James Altucher, a co-owner, wrote a viral essay with the provocative title “New York City is dead forever”. His thesis was that the city would never fully recover from the hit to commerce caused by the pandemic.

Seinfeld, who had performed at Stand Up NY in the past, responded in The New York Times by calling Altucher a “putz” and instructing him to “wipe your tears, wipe your butt and pull it together”. Dani Zoldan, another co-owner, fired back by calling Seinfeld “cold and arrogant”.

As the months went by, the club’s owners watched jealously as nearby business re-opened for indoor service. “It boggled our mind that the restaurant down the block could be open while we’re closed,” Waldman says. “Bars were open, bowling alleys were open. We thought people were forgetting about comedy clubs. We wanted to be treated the same as everybody else.”

They railed against Cuomo in the media and sued him to let them re-open. A day after they launched their lawsuit the Governor announced the return for live venues.

Stand Up NY will re-open on Good Friday, the first available opportunity, with a capacity of 40 audience members rather than the usual 120. Waldman says the club will at best be breaking even, but they’re thrilled they can open their doors. Jerry Seinfeld, he adds, is welcome to visit any time. 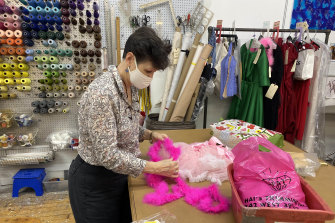 Fire truck sirens wail from the street below as Sarah Timberlake and her employees measure out strips of fabric. Timberlake’s studio, in the heart of Manhattan’s fashion district, looks busy but appearances can be deceiving. Timberlake is a theatrical costume maker whose specialty is creating and altering outfits for Broadway musicals, as well as theatre, opera, dance and cruise performances. That is to say, all the creative fields that were essentially wiped out by the pandemic.

Timberlake says business is down 75 per cent from its usual level, and her staff are working greatly reduced hours. “They’re all on unemployment but it makes your soul feel better to have a paycheck,” she says. During the early weeks of the pandemic her team kept busy by making gowns they donated to hospitals and face masks for Native American tribes.

At times – when work evaporated completely – she thought of closing the business she has run since 1998. But she kept going. “You just keep working and you hope the next day you feel differently.”

For all the excitement about the return of live performances, she says she hasn’t yet seen any surge in demand for theatrical costumes. Broadway shows are not expected to re-open until September. It’s the same for the Metropolitan Opera and New York City Ballet.

Timberlake is bracing for a deluge of last-minute orders in the summer as theatre makers rush to get back on stage. That would be stressful, but also welcome after the past year. “Hopefully we’ll be slammed,” she says. 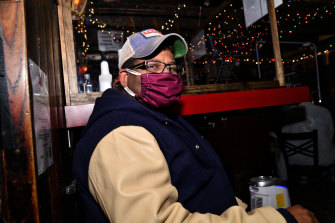 When Kenney Green arrives at Marie’s Crisis, a legendary showtunes piano bar in the West Village, the party is already in full swing. He settles into a booth with three friends and begins to belt out songs from Cabaret and Les Miserables.

“There’s no sound system, there are no microphones,” explains Greene, who has played at the bar for the past 13 years. “There’s just a piano in the middle of the room and people come from all over the world to sing their favourite Broadway tunes.”

As well as his workplace and favourite hangout, Marie’s is special to Green for other reasons: it’s where he met his husband Adam, who also works as a pianist at the bar.

Some passers-by poke their head in the door and seem amazed the bar is open. It’s no wonder: a cramped basement where people sing at the top of their lungs would be Dr Anthony Fauci’s idea of a COVID nightmare. Marie’s Crisis, which doesn’t have ticketed shows, was allowed to re-open in December because it is technically classified as a bar rather than an entertainment venue.

Only around 20 people are allowed in at once, and they are all seated. That’s a big change from the past, when people were packed in shoulder-to-shoulder. A plexiglass booth has been erected around the piano and plastic dividers separate the groups of patrons. Masks are required when moving around but only encouraged when people are singing while at their table.

“One of my long-time regulars came up to me the other night and burst into tears about how much it meant to her to be back in the bar singing with other people,” Green says. “New York City has survived the crime wave of the 80s and the financial crash of the 90s. We survived 9/11. We will survive the pandemic.”

Gogglebox: Who is the mum of the Siddiqui family and why doesn’t she appear on screen