Home » World News » Ethiopia may be on the edge of genocide 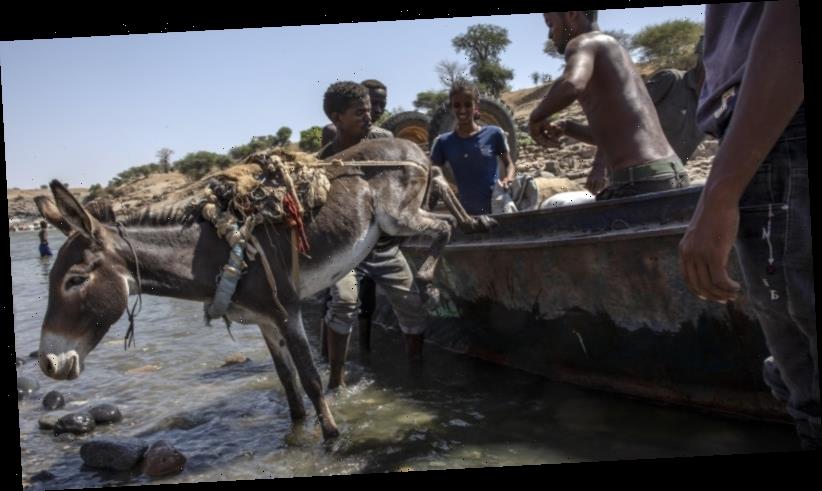 Ethiopia may be on the edge of genocide

Eastern Sudan: The women were midway through their labour when the hospital director came in and told Mihret Glahif she had to run for her life.

It didn't matter that her patients were giving birth, the staff had to leave immediately. The civil war had arrived, and it was knocking on the door. 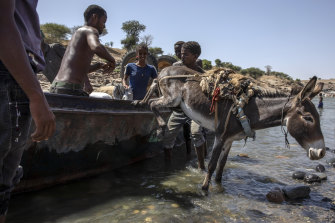 Tigray refugees who fled the conflict in the Ethiopia’s Tigray arrive with their donkey on the banks of the Tekeze River on the Sudan-Ethiopia border, in Hamdayet, eastern Sudan, on Saturday, November 21.Credit:AP

"We heard gunshots and bombs," the 25-year-old nurse said. "We left all of the patients. Some of them were injured soldiers, some of them were women in labour. We left everyone."

"I shouldn't have left them. I don't know how I will face God," she said after fleeing with thousands of others across hostile terrain with just her passport into the craggy sunbaked wasteland of eastern Sudan.

First-hand accounts reveal the savage battle raging between one of Africa's most powerful armies and the regional militaries in Ethiopia's northern Tigray that has triggered a mass exodus and a desperate humanitarian crisis. 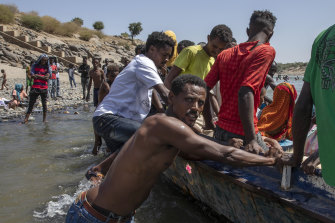 Tigray refugees who fled the conflict in the Ethiopia’s Tigray ride a boat on the banks of the Tekeze River on the Sudan-Ethiopia border.Credit:AP

A communication blackout after the internet was cut has meant so far precious few details have emerged of alleged bombings, beatings, machete massacres, even ethnic cleansing.

Hundreds, probably thousands, have been killed since the conflict erupted two and half weeks ago; and accusations of potential war crimes are coming in thick and fast.

"The Amhara [militia] cut off the heads of four children. They cut the babies out of pregnant women. I saw it with my own eyes," says Burani, 35, who has just trekked two days across mountainous terrain with no water to find safety in neighbouring Sudan.

Composing himself, he pleads for help. "Why is the world looking at what's happening? Why is no one helping us? 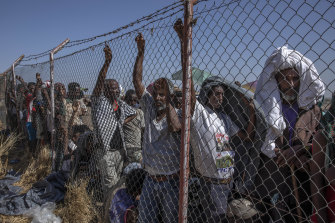 Tigray men who fled the conflict in the Ethiopia’s Tigray region, wait for UNHCR to distribute blankets at Hamdayet Transition Centre, eastern Sudan.Credit:AP

Kibane Hilufi, a doctor from the border town of Humera who also fled, says that bombs had rained down on his home from 3am to 2pm before he was forced to flee. He estimates 10 per cent of the town of 20,000 were killed.

"There were so many. So many. I think maybe 40 explosions. There were about 50 injured in the hospital. I think many more died."

Hilus alleges that the bombs came from near the northern border, raising fears that Eritrea, which has a long history of hostilities with Tigray, is also being pulled into the conflict.

Burani's descriptions of knife massacres chime with an Amnesty International investigation that last week concluded hundreds of civilians had been hacked or stabbed to death in the city of Mai-Kadra, in what appears to be an ethnic cleansing.

People who saw the bodies told Amnesty that they had gaping wounds that appear to have been inflicted by sharp weapons such as knives and machetes, reports which the charity says have been confirmed by an independent pathologist.

"This is a horrific tragedy whose true extent only time will tell as communication in Tigray remains shut down," said Deprose Muchena, Amnesty International's director for east and southern Africa. Three people told Amnesty that survivors of the massacre told them that they were attacked by members of Tigray Special Police Force, a regional paramilitary who are now at war with Ethiopia.

The conflict broke out on November 4 when the country's central government accused the region's local authorities of holding "illegal" elections and seizing a military base.

Facing down the Tigrayans is the Ethiopian government led by Abiy Ahmed, the Prime Minister, who has Russian-made MiG fighter jets, attack helicopters and federal forces at his disposal.

Tigray itself is a mountainous region home to some of the most battle-hardened fighters on the continent and many of Ethiopia's top military minds.

Ahmed won the Nobel Prize for signing a historic peace deal with Eritrea shortly after he was elected amid a wave of hope in April 2018. But his sweeping reforms have marginalised the regional Tigrayan government, which once dominated the country's ruling coalition.

Experts say the conflict could tear the country apart, unleashing catastrophic ethnic bloodshed, destabilising the Horn of Africa and fracturing a key US security ally.

"Ethiopia is now perched precariously on the ledge – all signs point to a country in a pre-genocide phase," Rashid Abdi, an independent expert on the Horn of Africa wrote last week.

Suggestions that missiles have started landing in Ethiopia from Eritrea open the possibility of a new front that could undo the peace agreement.

The Tigray People's Liberation Front launched missiles at Asmara, the Eritrean capital, last week, according to the regional president.

With internet and phone lines cut in Tigray and a crackdown on media freedom across Ethiopia, it is impossible to know exactly what is really going on.

It is thought that at least 35,000 people have fled across the border in the last week. At least 4000 are crossing the border each day. The Sudanese government has said it is bracing for 200,000 refugees in the coming days.

Refugees walk for days to reach safety along paths once trodden by those fleeing the famine in the Eighties. More than half of them are exhausted women and children, carrying almost nothing.

The witnesses this publication spoke to now reside in what is known as Village 8, a makeshift refugee camp in Sudan's Kassala region.

The camp is a town that was originally built to house local Sudanese displaced the construction of a vast Chinese dam nearby. But the town was never completed. Instead at least 15,000 Ethiopians who have fled the fighting in the last two weeks, walking or swimming to safety, are now housed in the windowless concrete blocks.

Some of the medical professionals seeking asylum at the camp have begun to set up their own makeshift clinic on the site. The clinic's roof is broken and clouds of dust hang over a tangle of IV rubes hanging on stands.

Doctors and nurses are crippled with hunger after about 10 days with little food as the full scale of a humanitarian disaster unfolds before them.

The swelling camp has been living off meagre distributions of food from NGOs who have made it to the site, more than a day's travel from Sudan's capital of Khartoum.

A huge mound of aid arriving yesterday triggered a panicked rush, with refugees seizing what they could before security forces intervened. Scuffles broke out before many desperate refugees were beaten back by security with rubber batons.

CategoryWorld News
Tags'Be edge Ethiopia May of on the