One third of patients requiring critical care are waiting longer than 15 minutes for an ambulance in Victoria, as the “long tail” of the pandemic continues to strain the health sector.

Victoria’s health and ambulance performance data, released on Saturday, shows ambulances reached 66.8 per cent of code one call-outs – defined as high-priority, time-critical incidents – within 15 minutes, well short of the 85 per cent target. 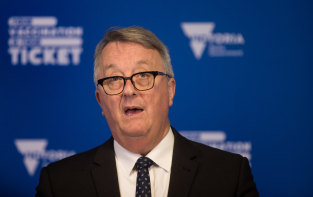 During the first three months of 2022, emergency departments treated 462,934 patients, despite thousands of health workers being furloughed while they were sick, symptomatic or caring for family members with COVID-19.

The staff shortages and high case numbers, which resulted in a statewide code brown, led hospitals to call workers back from leave. At the peak, thousands of hospital and health workers were being furloughed every day, due to COVID-19 infection or exposure.

Health Minister Martin Foley said the demands on the health system, delays caused by staff being furloughed, infection prevention and control, and the “sheer number of cases they were responding to” were contributing to the delays in ambulance response times.

Despite the massive demand and staff shortages, the number of elective surgeries performed had only fallen 6 per cent on the previous quarter to 27,690.

During the March quarter, 89,611 patients were on the elective surgery waiting list, waiting a median 19 days for surgery.

The government this month announced it would ramp up surgical activity to record levels as part of a $1.5 billion hospital blitz to clear a backlog of elective surgery that built up over the pandemic.

In a significant pre-election health pitch, the government said elective surgeries would be cranked up to 125 per cent of their pre-pandemic levels, with an extra 40,000 in 2023, building up to 240,000 every year from 2024.

Foley praised the efforts of health workers under challenging circumstances and insisted any Victorian who needed hospital care could be confident in the capacity of Victoria’s health system to care for them.

“Despite the enormous challenges that we’ve faced over the last two years, our health care system continues to deliver world-class treatment and support,” he said.

“We’re very aware that in the coming months, we don’t only face the ongoing challenges of COVID but also the potential impacts of a flu season as well, and obviously, we haven’t seen a significant flu season over the past two years,” he said.

“Just to reassure you that, at an Austin Health level and across the system, there’s been an awful lot of work in planning and preparing for that, so I feel confident with that.”

Foley urged Victorians who were yet to book a flu vaccination to do so.

“Unfortunately, a shortage of healthcare workers continues to be a major problem and will likely get worse in coming months with both COVID-19 and flu circulating at the same time,” he said.

“We all need to be ready for that, so please get vaccinated for both COVID-19 and influenza if you haven’t already. It will help our ambulance service and hospitals deliver care to people who need it.”

“We have an enormous health system in Victoria but for many people, the main entry point to the health system is either through triple zero or through hospital emergency departments,” he said.

“Just the other night, what our members were telling us is a huge amount of the calls that they were tied up with were very low acuity cases, cases where people could very easily have called a taxi. Paramedics are literally turning up to patients with their suitcases packed. If they’ve got time to pack their suitcase, they have time to wait for a taxi and they shouldn’t be taking an ambulance off the road.”

Hill said people should seek other pathways for medical care, including their GP.

I'm a mom, I refused to pay for Tylenol for my C-section, but that wasn't even the worst part of my nightmare birth