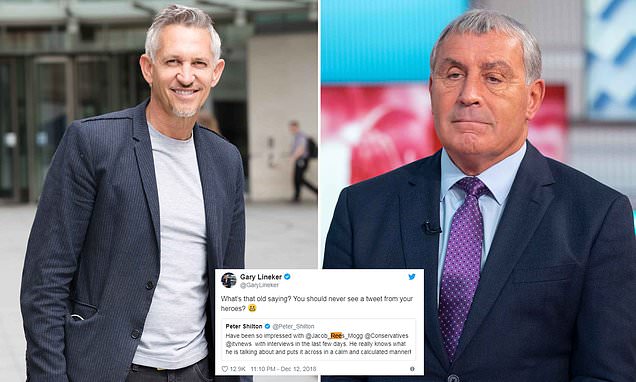 The Match of the Day host, 58, also told former teammate Chris Waddle to ‘stick to football’ when he said it would be best if Theresa May left the EU with no deal.

Last month Mr Lineker, an outspoken Remainer, appeared at a ‘People’s Vote’ rally calling for a second referendum and has said stopping ‘frightfully boring’ Theresa May’s Brexit is more important to him than football.

As Mrs May survived her no confidence vote last night the former Spurs and Barcelona striker poured scorn on Peter Shilton’s praise for Tory Brexiteer Rees-Mogg.

Mr Shilton, who played for Mr Lineker’s beloved Leicester City, tweeted: ‘Have been so impressed with @Jacob_Rees_Mogg in the last few days. He really knows what he is talking about and puts it across in a calm and calculated manner!’

Gary Lineker responded to him and said: ‘What’s that old saying? You should never see a tweet from your heroes?’. 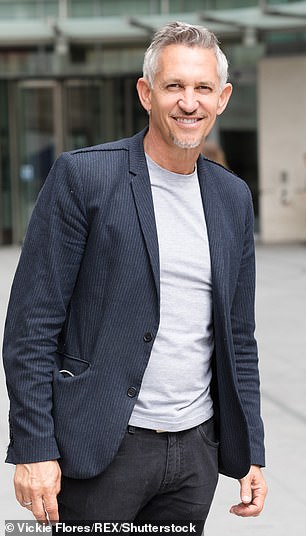 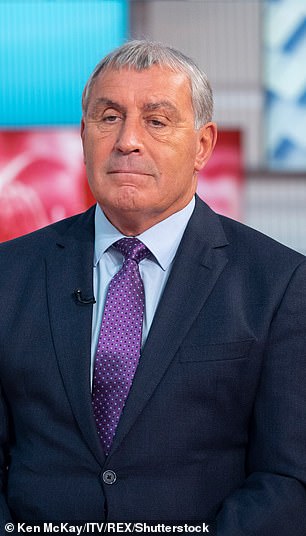 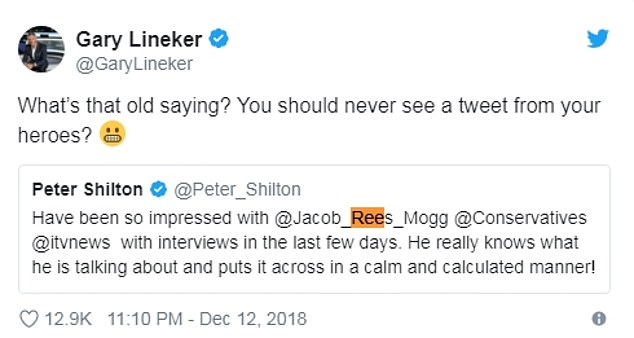 Michael Vaughan has backtracked after saying Britain needs a ‘no nonsense’ leader like Donald Trump.

The former England cricket captain tweeted his views as Theresa May faced a no confidence vote as her Brexit plans lie in ruins.

He tweeted: “Give me a Donald Trump style leader over any of our leaders any day of the week….”

His messages sparked thousands of responses from people saying he should stay away from politics and playfully suggesting he may have been drunk.

Today he said: ‘Note to self … Don’t ever mention DT on twitter again in any way shape or form !!! Cheers’.

Fellow 1990 World Cup hero Chris Waddle also got involved in the Brexit debate and said: ‘Well done Theresa May, now let’s leave Brexit with no deal we will be fine’.

Friends and former teammate Lineker then replied: ‘Stick to football’, to which Waddle’s supporters replied: ‘That’s rich coming from you pal’.

Mr Lineker has said that blocking Brexit is more important to him than football as he backed a campaign for a fresh referendum.

The Match Of The Day host said he was more bewildered and worried than ever after catching up on developments since returning from Russia following his coverage of the World Cup.

He also threw his support behind the People’s Vote ‘summer of action’ that involved a series of rallies and protests across the country.

He said: ‘I find the whole thing more bewildering and worrying than ever.

‘Whether you voted Leave or Remain, did anyone really vote for the mess we seem to be in, let alone the prospect of no deal with all the terrible consequences attached to that?

‘There are some things in life that, even for someone like me, are more important than football. This is one of them. I am not a politician but I know when something is going wrong and right now Brexit feels like it is going very wrong indeed.

‘The politicians seem unable to resolve the problem the people gave them in voting to Leave’. 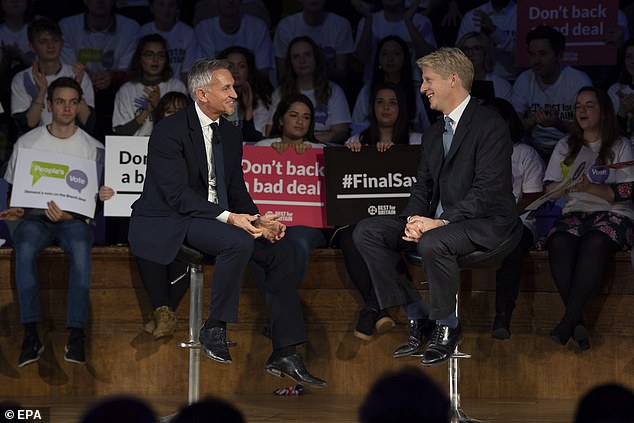 Lineker frequently discusses Brexit on his Twitter page, railing against what he said were the dire consequences of a no deal Brexit.

‘We’re not actually, really, seriously, possibly contemplating a no deal Brexit, are we? Democracy is democracy and all that but there are limits to how much we want to self-harm, surely,’ he wrote.

Last month he hosted a Q&A at a ‘People’s Vote’ rally in Westminster attended by 3,000 people and interviewed Boris Johnson’s brother Jo, who quit as a minister over Mrs May’s handling of Brexit.