Three Lions fans are warming up for their crucial World Cup clash against the Lions of Teranga, the nickname of the Senegal football team, by insisting that finally, ‘It’s coming home.’

Around 7,000 England football fans are expected in Doha for Sunday night’s clash at the Al Bayt stadium, with tickets exchanging hands on the black market for upto £1,000.

England fans started gathering early in bars located within Doha’s four and five star hotels as they knocked back the pints in preparation for the last 16 knockout clash, while others hit the city’s malls for some shopping – and to enjoy the air conditioning.

Tim Reed, 63, from Ipswich, Suffolk, said: ‘We’re going to win 2-1. I’m really looking forward to the match and am getting very excited about it. 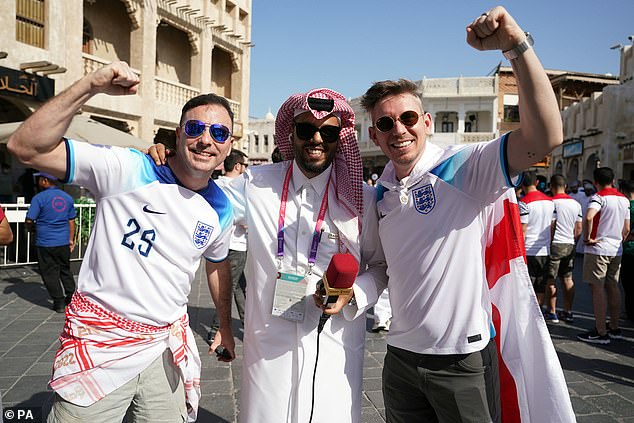 England fans in the Souq area of Doha today, ahead of the FIFA World Cup Round of Sixteen match at the Al-Bayt Stadium in Al Khor, Qatar 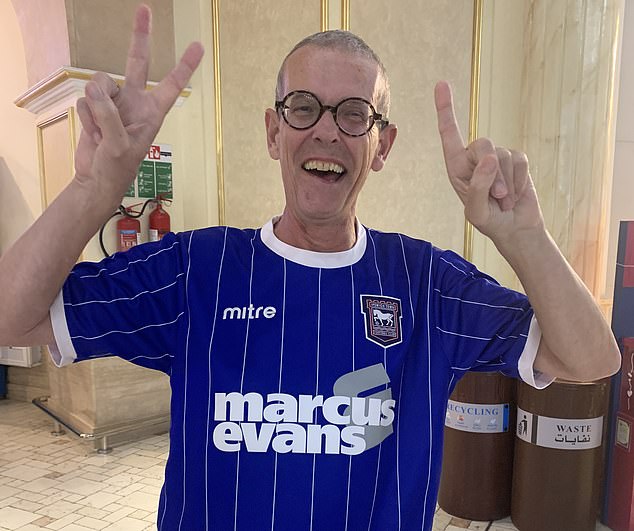 England fan Tim Reed, from Ipswich, Suffolk, said ahead of today’s clash with Senegal in Qatar that he thinks England will win 2-1 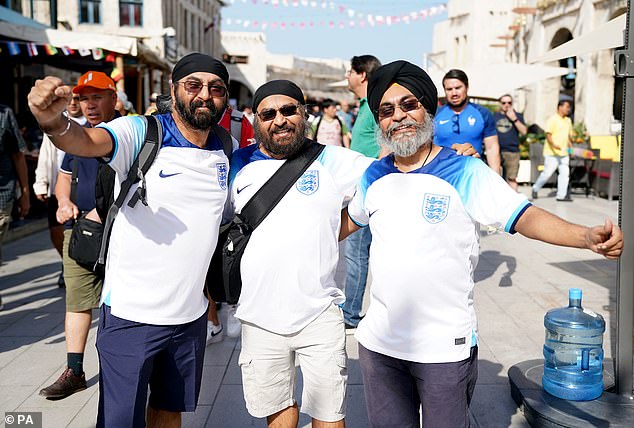 England fans visit the Souq area of Doha, ahead of the FIFA World Cup Round of Sixteen match at the Al-Bayt Stadium in Al Khor, Qatar tonight

‘The only problem is that I’m supposed to fly home after the game, so if England do get to the quarter-finals I might have to fly back. It’s been a fantastic tournament so far and I’ve enjoyed every minute of it.’

Kevin Cassidy, 43, from Leeds, said: ‘I follow England all over the world and at last we’re looking like a team that can win something. We’ve come close recently but this time I think we’re going to do it.

‘My prediction is a 2-1 victory. But whatever happens, it’s been a fantastic experience being in Qatar. I’ve loved every minute of it.’

His friend Darren Sutcliffe, 55, also from Leeds, added: ‘I’m not feeling as confident as some of the other England fans but I think we’ll win on penalties.

Among the fans were Molly Burns and her mother Nikki. But there is a family division in the lead up to tonight’s big match. 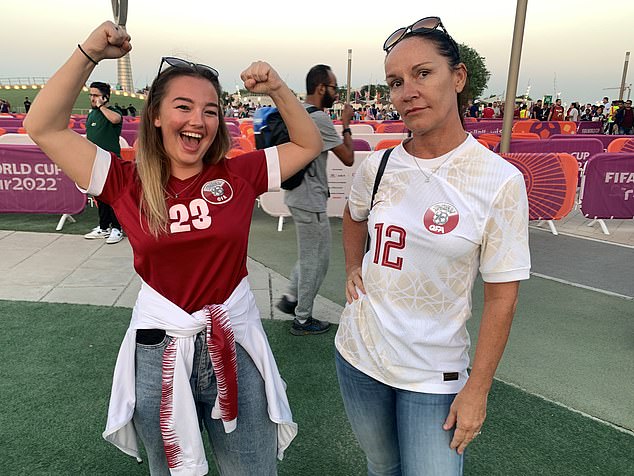 Mother Nikki (right) and daughter Nikki (left) are seen in the fan zone. Molly is supporting England tonight while her mother Nikki is married to one of the host nation Qatar’s coaches 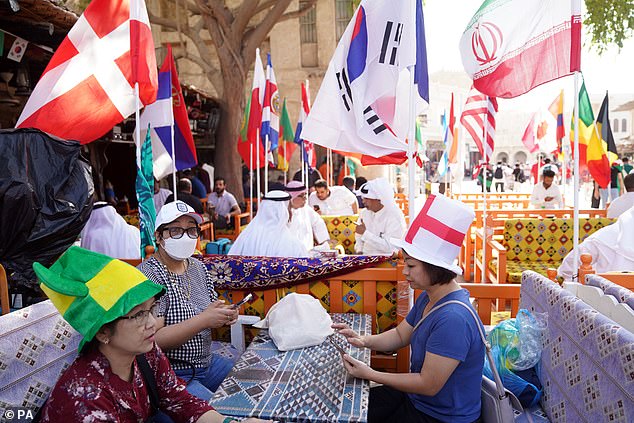 England fans are seen in the Souq area of Doha, ahead of the FIFA World Cup Round of Sixteen match at the Al-Bayt Stadium in Al Khor, Qatar, on December 4, 2022

Molly, 21, from Leeds, is supporting England, while her mother has given up on football, as she is married to one of the Qatar team’s national coaches.

The host nation was dumped out in the group stage.

‘It’s a shame that Qatar got knocked out, but it’s a wonderful tournament that’s going really well. ‘

Molly added: ‘ I think England will win. Harry Kane will score his first goal and we’ll go all the way to the final.

‘The team have been progressing quietly, while there’s been so much about countries like Brazil, Argentina, France.

‘This could be our World Cup if we just carry on playing and focusing.’

Senegal fans prepared for the match by performing traditional dances in central Doha and singing their own version of It’s Coming Home.

Dozens of supporters of the West African country staged a Sanbar dance, which is performed for good luck ahead of major events.

Antonia Seck, 26, from Dakar, said: ‘We’re getting ready for the big game in the same way we would prepare for a wedding or any other celebration. That’s because after the match against England, we’ll be celebrating.’

Her friend Georgia Diop, 28, added: ‘We love to dance and sing in Senegal. It’s going to be a great game and we will win.’

Around 3,000 Senegal fans are expected to be at the game and are likely to be outnumbered by their English rivals. 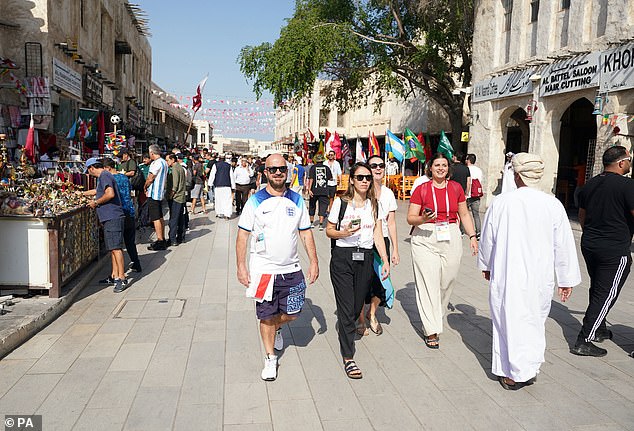 England fans visit the Souq area of Doha, ahead of the FIFA World Cup Round of Sixteen match at the Al-Bayt Stadium in Al Khor, Qatar tonight 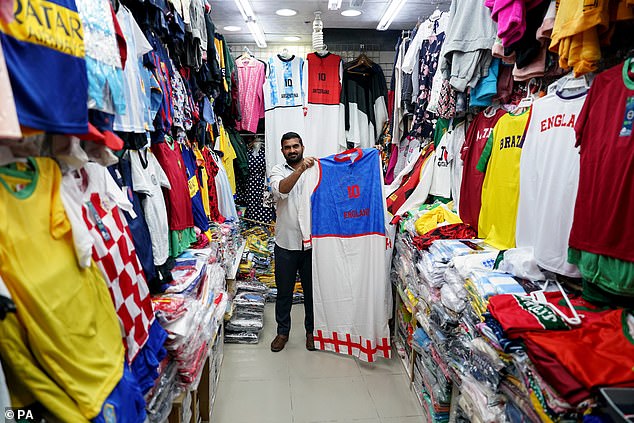 An England thobe, a type of Arabic dress, is seen for sale at a store in the Souq area of Doha, ahead of the FIFA World Cup Round of Sixteen match at the Al-Bayt Stadium in Al Khor, Qatar tonight

Ahead of the match, they sang the team’s anthem in their native Wolof language, which boasts that ‘Senegal are the champions’ and that the ‘trophy is going back to Senegal.’

Cheikh Diop, a Senegal fan who admitted that he also closely followed English Premier League football, said: ‘We have our version of It’s Coming Home. But I can tell you it’s definitely coming home to West Africa.

‘This is our song for the team. We’re feeling very confident about this match. Senegal are going on a great adventure and the world is about to see what a great football team we are.’

Souleymane Diallo, 38, a football coach from Dakar, said: ‘I know quite a lot of the players and have been speaking to them on the phone. They’re feeling very confident about this game. The mood amongst the boys is very positive.’

His friend Doudou Mane, 32, added: ‘We won’t have a lot of fans in the stadium but we will make the most noise. Senegal will be victorious.

‘We have a fantastic team and very passionate fans. There are not many of us here but the whole of Senegal is with us.’

He added: ‘My prediction is that Senegal will win 3-1.’

Charles' crown needs to be resized ahead of next year's coronation