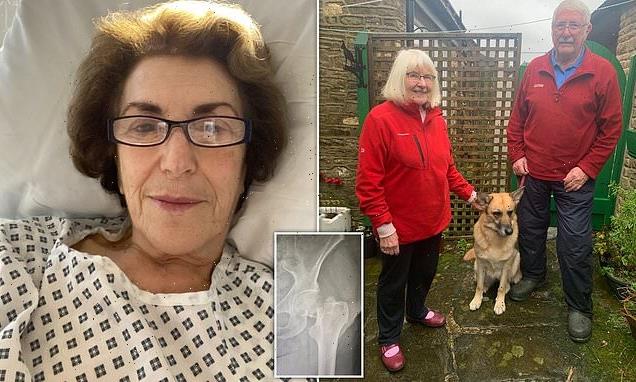 Edwina Currie's neighbour DENIES claim that his dog knocked her over

EXCLUSIVE: Edwina Currie’s neighbour DENIES ex-Tory MPs claims that his German Shepherd knocked her over – insisting she tripped over her OWN terrier dogs

Edwina Currie’s neighbour has slammed the former Tory MP’s claims that his German shepherd attacked her so badly that she ended up in hospital for urgent hip surgery.

Terry O’Malley, 78, launched a vociferous defence of his pooch Belle, aged 5, who Ms Currie claimed left her ‘totally mashed up’ after the dog lunged at her near her home in Whaley Bridge, Derbyshire.

The smash left the I’m a Celebrity veteran needing an emergency hip replacement, which left her in hospital for 10 days.

But Mr O’Malley told MailOnline: ‘I don’t know what Edwina is talking about. Belle didn’t even touch her and didn’t cause her to fall. This whole incident has been blown out of proportion and it’s got nothing to do with my dog.

‘Belle is a lovely, gentle dog who would never attack anyone. Everybody in Whaley Bridge knows this. It’s nonsense for Edwina to say that my dog lunged at her and that it led to her hip breaking. I think she’s a bit confused about what actually took place.’ 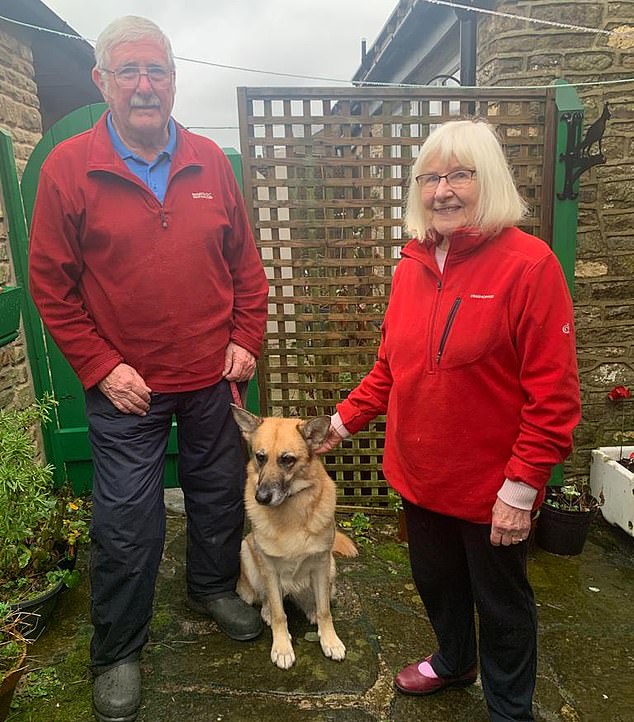 Edwina Currie’s neighbour Terry O’Malley, 78, has denied the former MP’s claim that his German Sheppard Belle (pictured with O’Malley), knocked her over 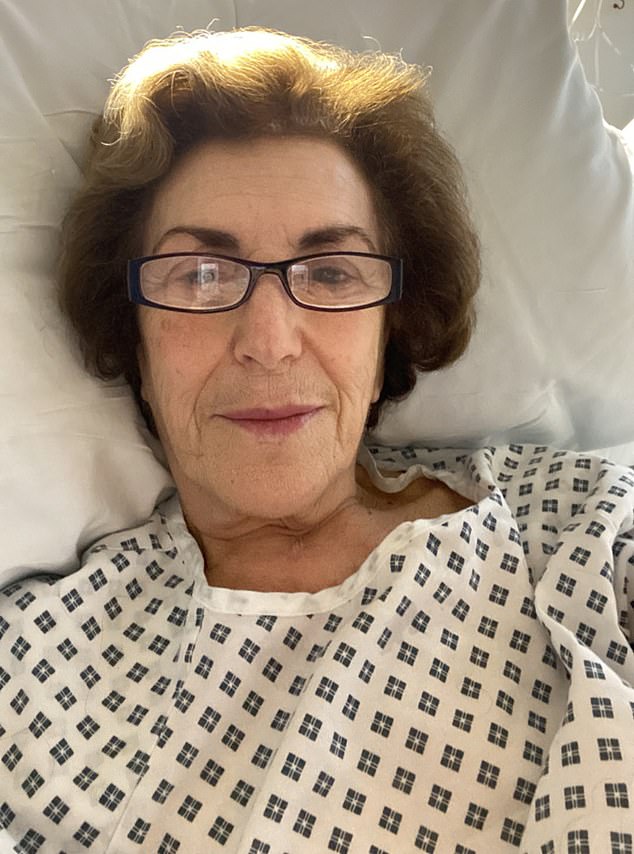 Edwina Currie, 76, spent 10 days in hospital after she claims the German Shepherd smashed into her, breaking her hip

The former MP had been walking with her dog near her home in Whaley Bridge, Derbyshire, when she said she was knocked down. The collisions caused her hip (pictured) to disintegrate

Recalling the incident, which took place on 12 October Mr O’Malley said that he was out walking with Belle across a field close to his and Ms Currie’s home.

He said: ‘We were at the entrance to a narrow path close to a road and as I stopped to put a lead on Belle, I heard two dogs barking and yapping at the opposite end. Belle started barking back and ran towards them and a short scuffle broke out.

‘I ran after Belle to get her under control and as I was doing this, I noticed Edwina standing close to the two small dogs and realised that they were her Terriers. Belle moved to one side, I got her under control, and it was at this point that Edwina stumbled over her dogs and fell to the ground.’

Mr O’Malley, a retired engineer added: ‘At the moment Edwina fell, Belle had moved to the left. There was no sustained attack by my dog because Edwina fell over her own dogs.’

Mr O’Malley also denied Ms Currie’s claims that he never asked how she was after the fall and that he showed no remorse. 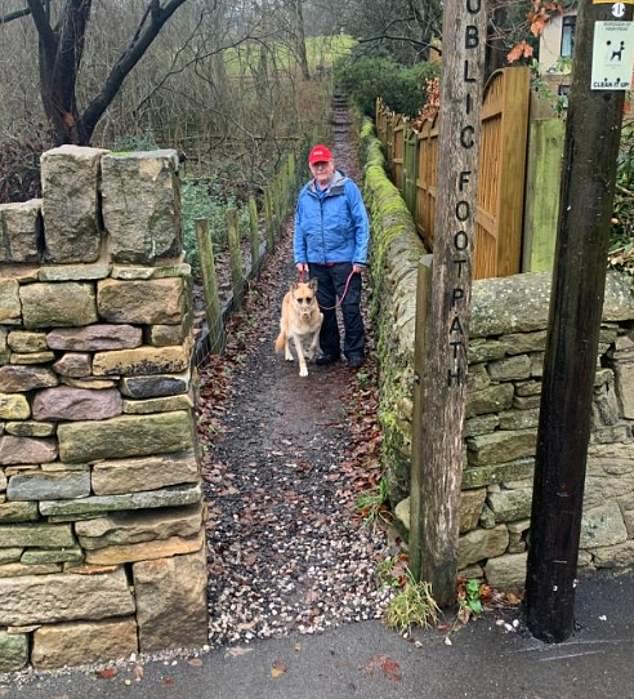 The incident occurred in Whaley Bridge (location pictured), Mr O’Malley said that Ms Currie tripped over her own terriers

He protested: ‘Of course I asked her how she was but all I could hear was Edwina shouting: “I’m all right,” and “That dog should be on a lead.” I could tell she wasn’t happy, but I did not ignore her.

‘Two men came along and helped her to her feet, and she (Edwina) told me she was alright. I didn’t go close to her because my concern was to make sure that Belle was under control and out of the way to calm the situation.’

Mr O’Malley, who has lived in Whaley Bridge all his life claimed that he was only made aware that Ms Currie had been injured after police came to see him a week after the incident.

His home is only yards from where Ms Currie lives, and he has known her since she moved into the property around ten years ago and regularly sees her around the village of Whaley Bridge.

Mr O’Malley added: ‘The police took details from me about my version of events which is very different from what Edwina claims. But as the officer was speaking to me, she was stroking Belle. I think even she realised that my dog is not dangerous at all.

‘My partner and I know Edwina quite well and I was good friends with her husband John, who was a great bloke. But since all this happened, I’ve not spoken with her.’ 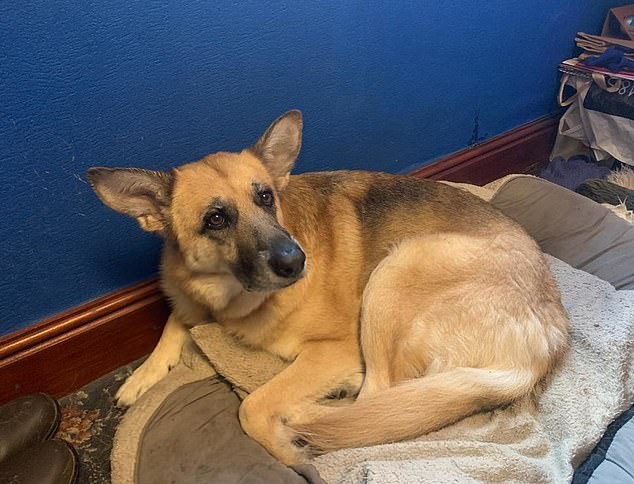 Belle (pictured), 5, now has to be kept on a lead and muzzled when out in public

Ms Currie claimed earlier this week that the incident with Belle was the ‘most terrifying experience of my life.’

She added: ‘I was numb with pain… It was awful. My hip was left totally mashed.’

Ms Currie ‘hobbled around’ for 12 days after the fall. But she said the pain was so excruciating that she had to be taken to Macclesfield Hospital.

It was here she discovered the joint had disintegrated. On 24 October she was rushed into surgery to have a replacement hip fitted and was discharged on 2 November.

On November 28Mr O’Malley received a letter from Ms Currie in which she outlined the details of the incident and demanded £5,001.98 in compensation. 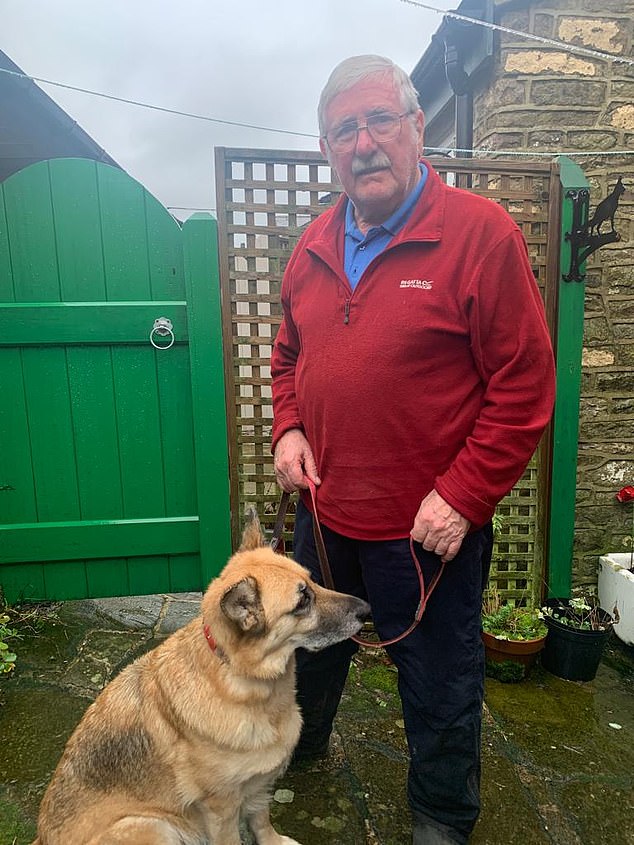 Ms Currie says Mr O’Malley’s dog knocked her over and is demanding he pay her £5,000

In her letter, Ms Currie writes: ‘Your failure to control your dog has led to considerable disability, pain and suffering, none of it through my own fault. I should therefore like to hear from you how and when you intend to put these matters right.’

But Mr O’Malley insisted: ‘This is a ridiculous sum of money, and I won’t pay it because I haven’t done anything wrong and neither has Belle. It’s disgraceful that a wealthy, well connected woman like Edwina is trying to get money out of me.

‘Edwina is a rich woman and she’s sent this letter to frighten me, but I promise you, it won’t work.’

Mr O’Malley lives with his long-term partner Anne Leyland, 80 and claimed that they survive on a combined pension of less than £500 per week.

He added: ‘She is trying to bully me into handing this money over, but I won’t be intimidated. If it comes to it, I will fight this all the way, but I don’t know how I will fund my legal case.

‘We’re a couple of poor pensioners who love our dog and we shouldn’t be victimised like this. Edwina has gone to the media about this story after it became clear to her that I wouldn’t pay this money.’

He fumed: ‘It’s not just her hip that was damaged but also her ego because she likes to get her own way.’ 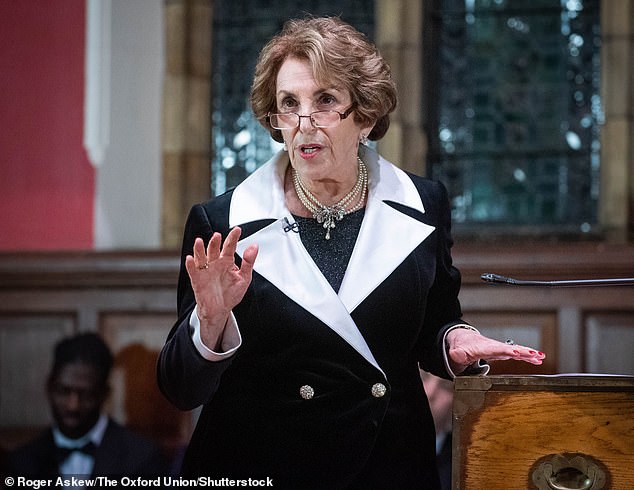 The former politician has become a regular on reality TV shows. She is seen speaking at the Oxford Union in February 2019

Ms Leyland added: ‘This whole incident has caused me enormous stress and at times I’ve been crying. I went to see Edwina a couple of weeks ago to try and discuss the matter but all she did was shout at me which has left me even more upset.’

Ironically, Mr O’Malley claimed that it was Ms Currie who recommended the organisation to them.

He said: ‘After my second dog Jess died, I was saw Edwina and told her how much I missed not having a dog and that I wanted another one. She’s the one whole told me about UK German Shepherd Rescue.

‘If it wasn’t for Edwina, Belle would not even be with us. Everybody in the village loves Belle and it’s very sad that she’s being accused of something so horrible. But I’m determined to defend both our good names.’

Following the incident, Derbyshire police told Mr O’Malley that Belle had to be kept on a lead and muzzled when out in public. He has not faced any charges.