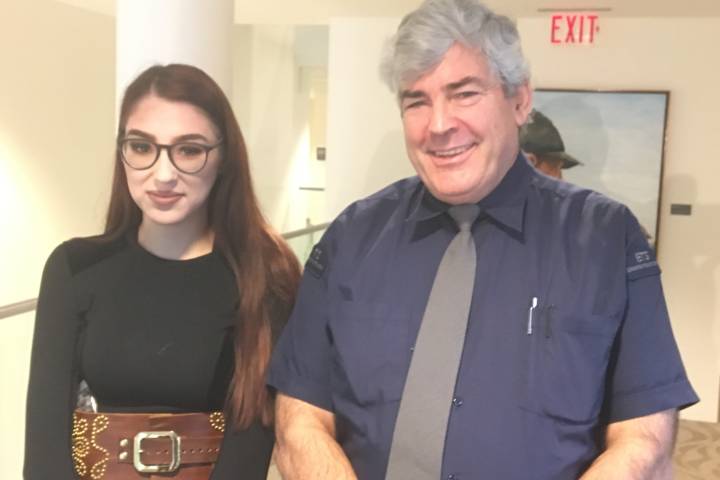 An Edmonton bus driver who stepped in to stop a racist verbal assault against two of his passengers was honoured at city hall Tuesday morning.

Larry Lazar Waters has been an ETS operator for nearly 40 years. What he heard on Nov. 1 was among the worst he’s ever witnessed.

“I’ve been driving a long time and I’ve heard many things. It was about as bad as it ever gets. It was maybe the worst,” he said.

Dalen Cardinal, 19, was on the #4 bus route with her six-month-old son and her friend, who was eight months pregnant at the time. A woman wearing a white jacket boarded the bus at Bonnie Doon Mall and started hurling racist insults at them, Cardinal recalled.

“She started to antagonize my eight-months-pregnant friend. She was calling her fat — a fat Indian, saying we belong at the shelter because we’re no-good-for-nothing Indians.”

“I had asked her to stop,” Cardinal said on Tuesday. “Then she had started saying really derogatory things to me.”

Another passenger spoke up and tried to stop the woman. Then, Waters stepped in.

“I’d asked the woman to stop, the offender, and she didn’t. So I secured the bus and got up and insisted that she leave. Fortunately, she did forthwith.

“It was a very unfortunate occurrence on the bus, not typical of what happens on Edmonton Transit — at least I hope not. Hopefully, in the future, if there are such events, they get dealt with quickly and effectively.”

Waters also wanted to thank the other passenger, an older woman, who spoke up and offered her support to Cardinal, her baby, and her friend.

“The bus was full of people and I’m so glad the bus driver and the other lady had stepped in because… I don’t know what would have happened if they weren’t there or if anyone else would have stepped in at all,” she said.

“I never thought that would happen to me in 2018 but I mean, it did and it’s still around.”

During a special moment in city hall on Tuesday, councillors applauded and gave Waters a standing ovation. Mayor Don Iveson could be heard saying, “Well done,” and that he was proud of Waters’ response.

Cardinal was happy she could be there to see Waters again.

“I’m really glad I was able to be here and thank him again.”

She hasn’t been able to thank the other Good Samaritan yet but hopes to in the future.

“I wish I could thank her as well,” Cardinal said. “I just want to thank you for being there. Words can’t even describe how thankful I am for the help I had received.”

The young woman said in her nine years living in Edmonton, she’s never experienced anything like she did on the bus in November.

“It’s offensive. We all want to go out and have a life, to do things we enjoy, be with people we care about and use Edmonton Transit,” he said.

“You should feel safe in those spaces. Anything that jeopardizes a person’s feeling of safety in public space — or their own private space — should be addressed.

“There will always be people who are against other groups, whether it be culture, colour, whatever, but hopefully by and large, people will be accepting of others and if they see something like this or something that’s out of line, they will step in. I hope so,” Waters said.

While he was honoured to be recognized at city hall, he was quick to acknowledge his fellow bus drivers.

“It was very nice but I’d like to say there are many other operators out there who are doing the very same thing.

“In a way, rather than taking this personally, I’d like to say that it’s a ‘thank you’ to Edmonton Transit at large. And, for all my brother and sister operators, this recognition is yours as well.”