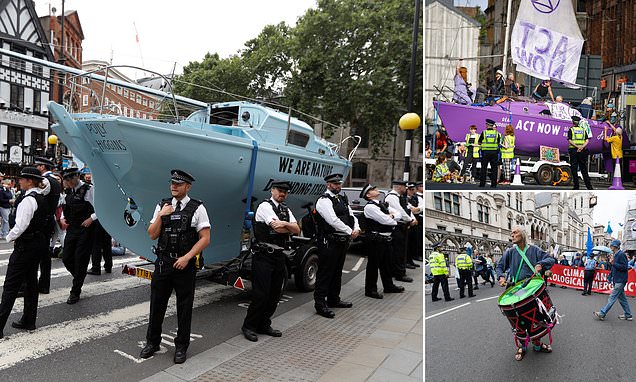 Extinction Rebellion protests have been launched again around the country in what the group is calling its ‘Summer Uprising’.

A group of climate change protestors have set up a demonstration outside the Royal Courts of Justice complete with a blue boat with the words ‘act now’ and ‘we are nature defending itself’ written alongside it.

It is part of a nationwide campaign that will see five boats block roads in London, Bristol, Glasgow, Cardiff and Leeds for the next week.

It comes months after hundreds of activists brought London to a halt in April with a huge protest that led to more than 1,000 being arrested and brought before the courts. 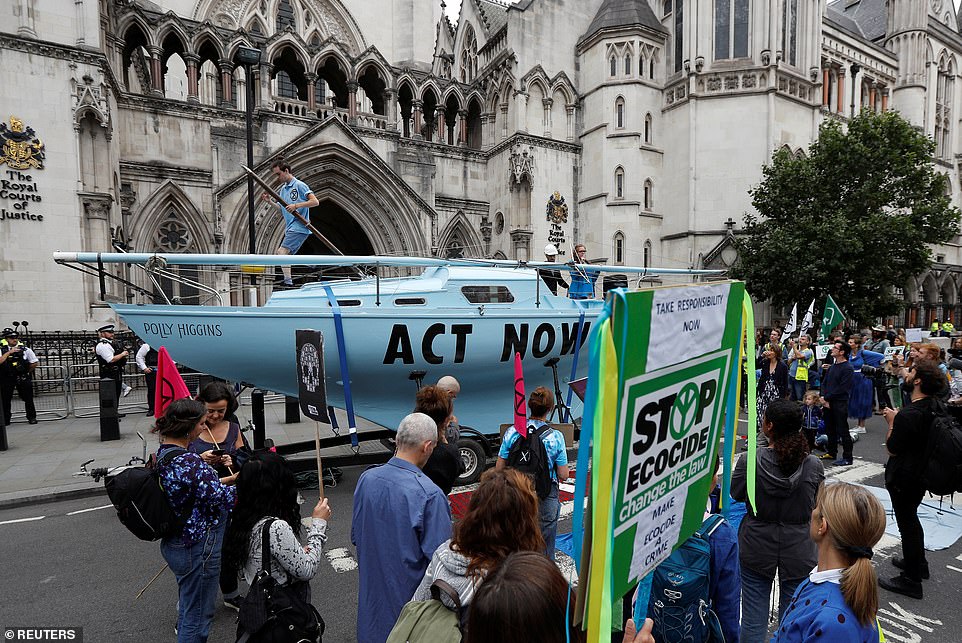 Extinction Rebellion have returned to London today and set up camp outside the Royal Courts of Justice, blocking the road with a blue yacht. Protestors are now gathering for a week-long demonstration 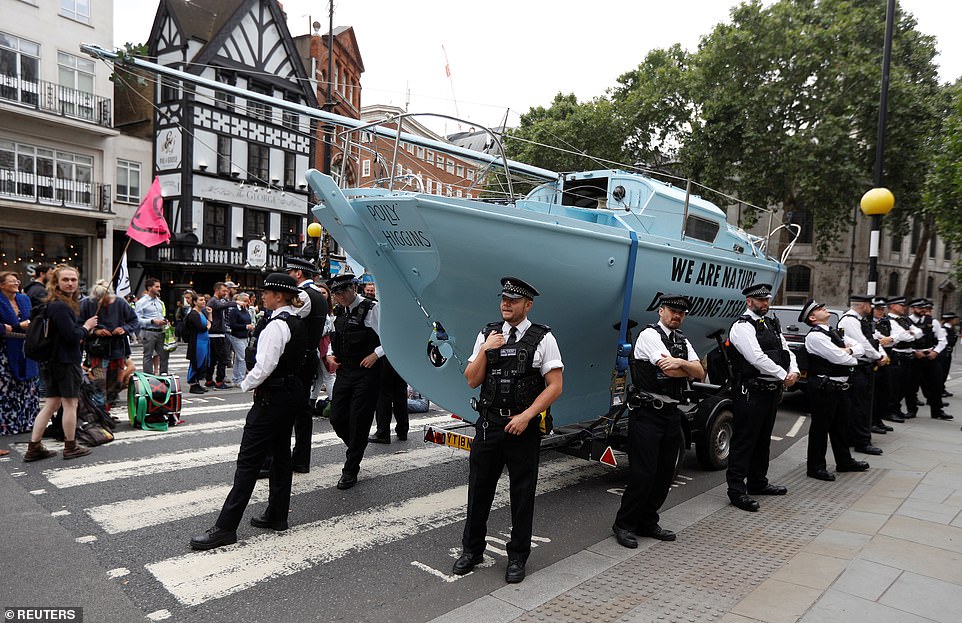 Police have set up a guard around the boat, pictured, which is named the Polly Higgins after an environmental lawyer who died of cancer recently. It is one of five boats being used to block roads in five different UK cities 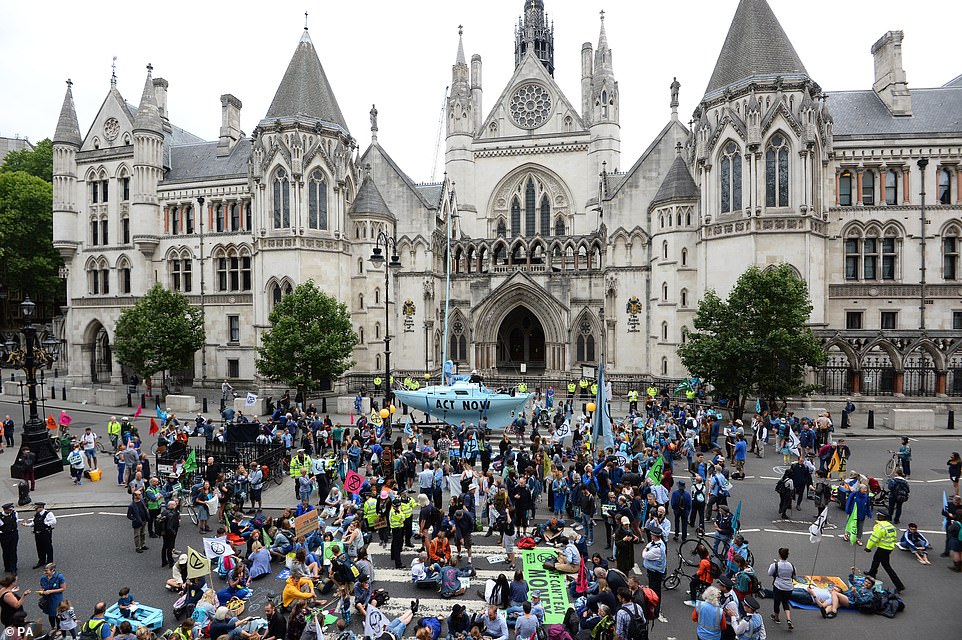 Large crowds are gathering outside the Royal Courts of Justice in London, pictured, just months after Extinction Rebellion brought the capital to a standstill in April with a huge protest 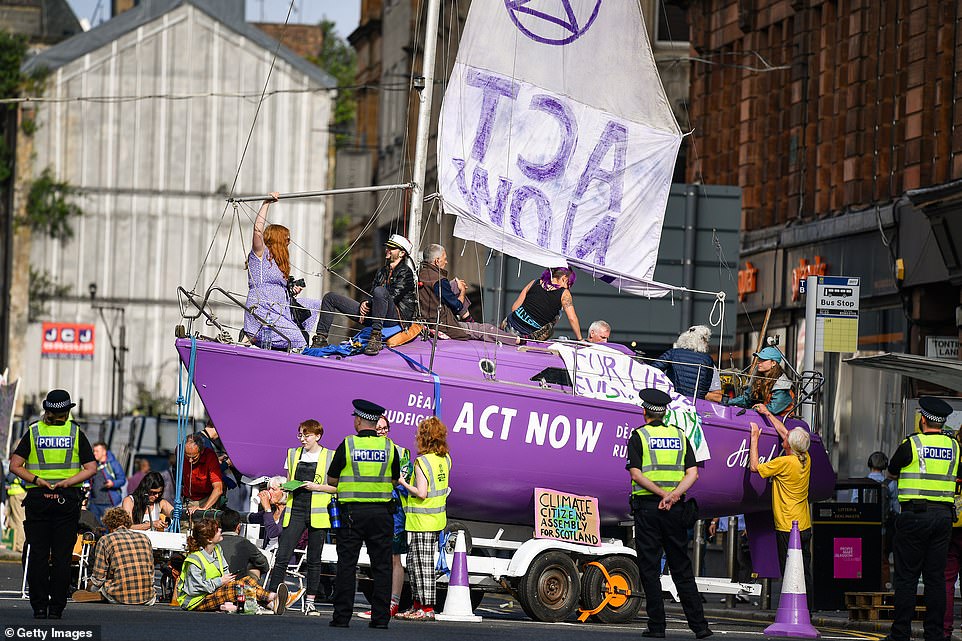 Meanwhile in Glasgow a purple boat has been set up near the High Street, and a huge sail has been unveiled reading ‘act now’, with more police officers posted to the scene to ensure public safety 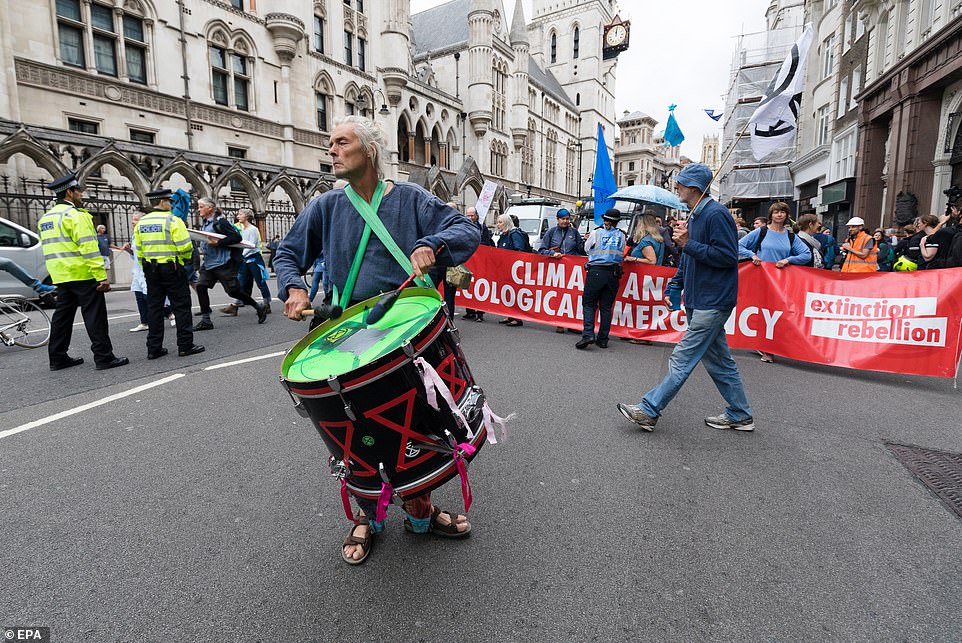 Extinction Rebellion said its protest outside the Royal Courts of Justice, pictured, was designed to ‘demand the legal system take responsibility for the climate change crisis’ 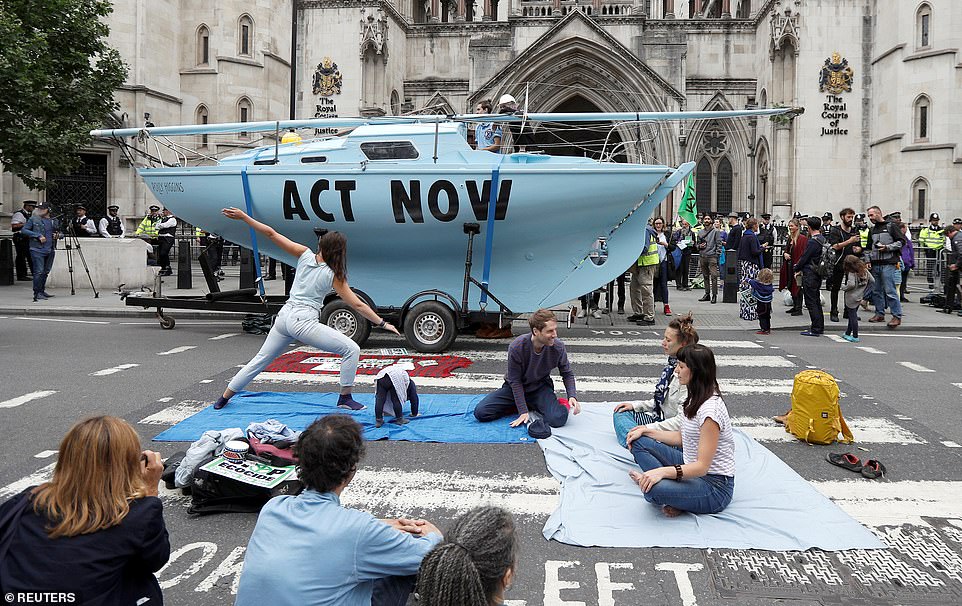 Protesters in London outside the Royal Courts of Justice, pictured, have already started setting up blankets and even appear to be doing yoga

The boats have all been named after climate change activists, with the London vessel named Polly Higgins in memory of an environmental lawyer who died earlier this year of cancer.

A spokesman for the group said of the London protest: ‘People will be gathering outside the Royal Courts of Justice to demand the legal system take responsibility in this crisis, and ensure the safety of future generations by making ecocide law.

‘We also stand in solidarity with climate activists around the world who are sacrificing their freedom to fight for climate justice.

‘This protest comes as the courts in the UK gear up to prosecute over 1,000 people who were arrested during our International Rebellion in April. We are calling on the Met and Crown Prosecution Service to drop all prosecutions.’

Meanwhile Jayne Forbes, 63 mother of two, who is one of the protesters, added: ‘I was arrested during the International Rebellion in April because it is so important to stand up and challenge a government who is not even performing its primary function of providing our security for the future. 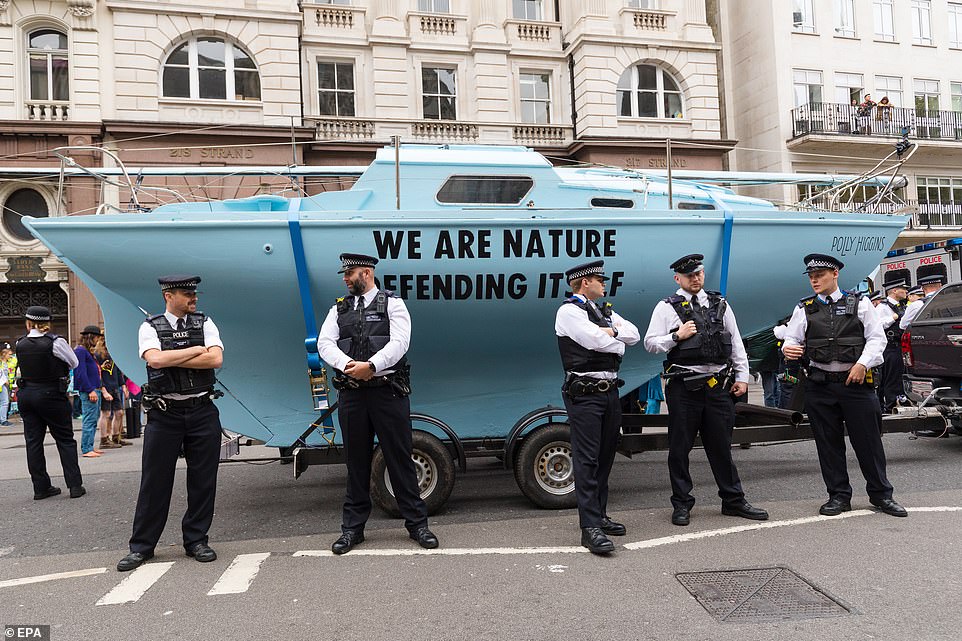 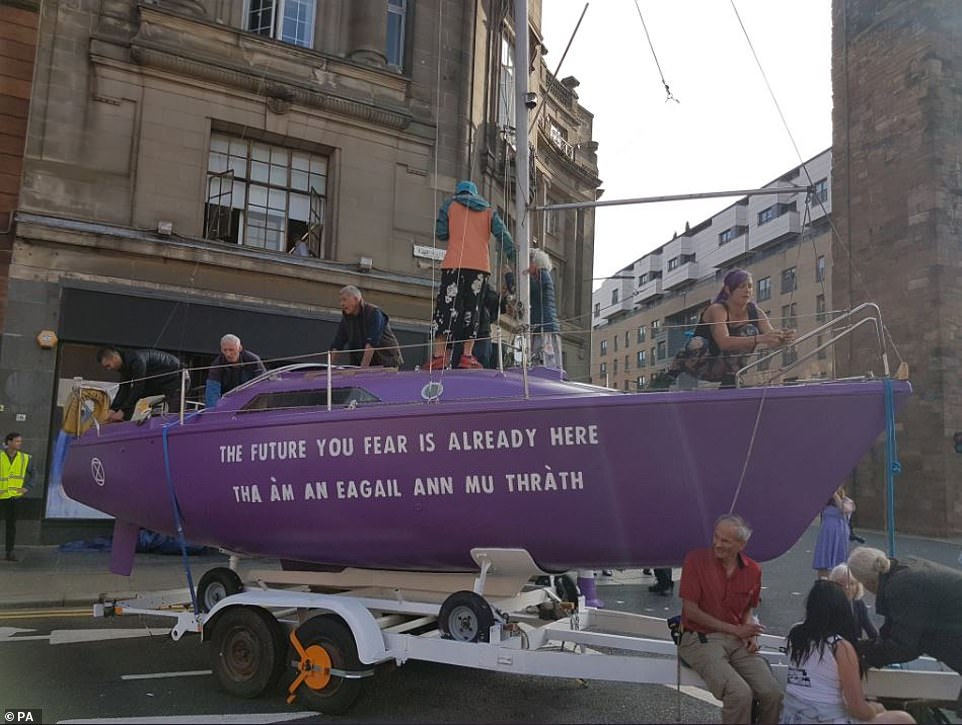 The boat in Glasgow, pictured, has been embossed with the words ‘The future you fear is already here’

‘I therefore believe we have a duty to engage in civil disobedience to promote the need for action now for climate and ecological justice. And yet the government may want to prosecute me for taking a stand to protect our future.’

More protestors are blocking the road outside Cardiff Castle in the Welsh capital, calling on the government to reduce greenhouse gas emissions.

The protesters say that despite declarations of a climate emergency by the Welsh government they are unhappy at a lack of action.

Self-described rebel and Extinction Rebellion spokeswoman Staci Silvin said that the group is inviting people from across Cardiff to join them in their protests.

Ms Silvin said they would like ‘thousands’ to turn up but have between 500 and 800 ‘rebels signed up’ across Wales.

The mother-of-two from Carmarthen said: ‘We are planning three days [of protests in Cardiff] but it might have to go on longer, it depends on what happens.

‘It would be great if some Assembly Members to come down and we would like the Welsh Government to put pressure on the UK Government.’

A number of people have already expressed frustration at the protesters causing delays through the capital.

One commuter said: ‘It is causing absolute chaos. There is not much notice and if I go back all the other routes seem to be congested as well. I don’t know how long it is going to take me to get to work.’ 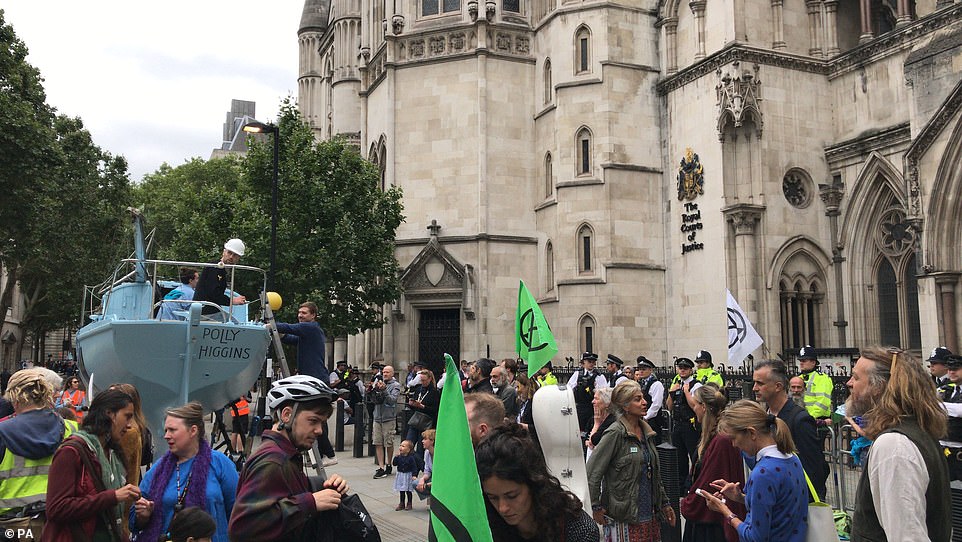 Crowds have been growing outside the Royal Courts of Justice, pictured, in London throughout the morning 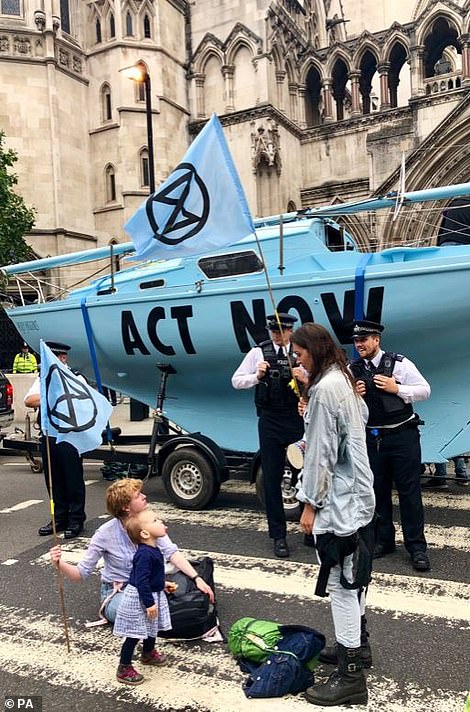 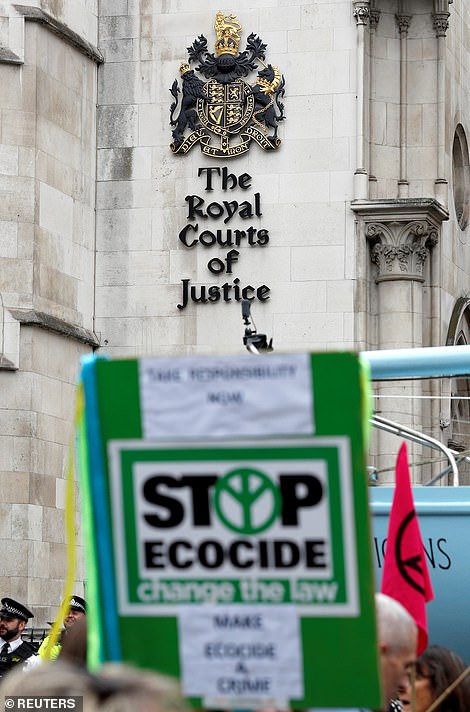 Even young children have been brought along to the protest in London, pictured left, where protestors have been waving banners and placards with the message ‘stop ecocide’

Ms Silvin said: ‘I just feel completely embarrassed that we have to do this. I have got children so I know what it’s like to get them ready in the morning.

‘The people that are acting down there are desperate because for more than 20/30 years they have been campaigning and nothing has happened.

‘We are really sorry we have to disrupt Cardiff. Just a big apology from us.’

Ms Silvin added that people should ‘enjoy their car free party’ for the next few days, with a number of speakers, musicians and comedians planned to entertain the crowds.

In Glasgow, around eight protestors have chained themselves to a 25-foot long purple sailing boat.

It is positioned at the intersection of Glasgow’s Gallowgate and High Street, by the Merchant City clocktower.

Traffic and public transport are being rerouted and there’s a significant police presence in the area.

They have displayed banners and a sail that reads ‘Act Now’ with the message also emblazoned on the side of the vessel in Gaelic.

Extinction Rebellion Glasgow is taking to the streets today as part of the climate group’s ‘Summer Uprising: Act Now’ protests.

Other demonstrations are set to take place in Bristol, Cardiff, Leeds, and London, armed with a fleet of boats.

The five boats are different colours and similar to the pink boat that occupied Oxford Circus in London during International Rebellion on April 1.

The boat in Glasgow has also been painted with ‘The Future You Fear is Already Here’. 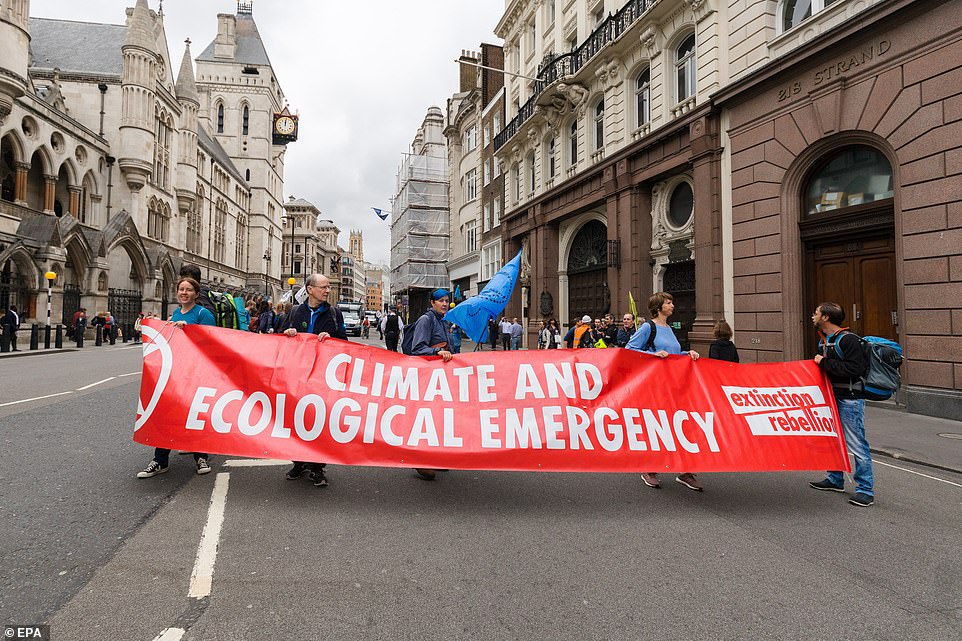 A small Extinction Rebellion group set up the protest in London (pictured) at 9am, with others going on in Cardiff, Bristol, Glasgow and Leeds

‘We are currently accepting a path where millions will be displaced or die. By not acting we are collectively complicit in this.’

Meanwhile a boat has been set up to block Bristol Bridge while protestors have set up camp outside the City Hall to protest against more than 22,000 homes in the area being at risk of flooding from rising waters.

The Bristol chapter of Extinction Rebellion said: ‘Over 1,200 people from South West England will be converging on Bristol for five days of action. Rebels will disrupt multiple sites in the city for five days, starting with Bristol Bridge on Monday morning.

‘The protest will peacefully escalate on Tuesday to disrupt Bristol Council, where Extinction Rebellion Youth will hold College Green. Wednesday will feature a Critical Mass Bike Ride, which will visit the five areas of the city with the worst air pollution.

‘Extinction Rebellion Bristol will be encouraging people to consider the effects on their lives of droughts, storms and rising water.’

Meanwhile in Leeds, activists are setting up in the City Square to target the financial district because it is the ‘biggest and fastest growing outside of London’.

A spokesman for the group said: ‘[We are] drawing attention to the links between banking and the climate and ecological emergency. Rebels will demand that the finance industry changes course to be on the right side of history, and invest in renewable energy and green solutions, rather than adding fuel to the fire.’

Alex Evans, 43, of Extinction Rebellion Leeds, added: ‘As a parent with young children, I’m deeply scared about the kind of future our kids will inherit.

‘It feels like we’ve had decades of everyone waiting for someone else to do something about climate change – now we’re out of time and can all see the signs of climate breakdown all around us.

‘I’m involved in Extinction Rebellion because I want government, big banks and businesses to recognise that this is an emergency and act now.’

Ben Stokes’ proud parents say: ‘It was written in the stars’

Who is Abi Titmuss? Days Of Our Lives star married to Ari Welkom and mum-of-one
World News