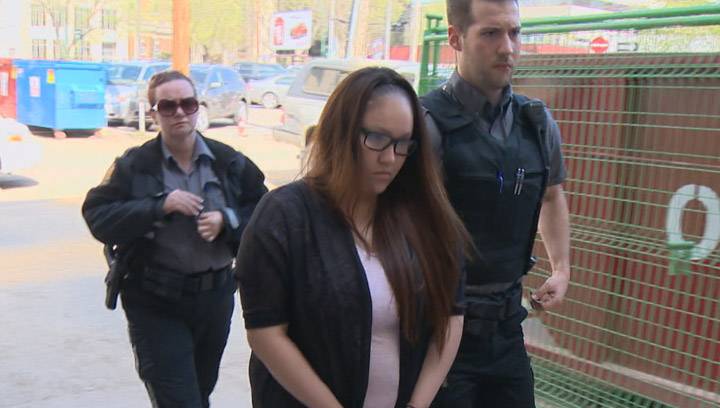 An early release from prison has been revoked for a drunk driver who was behind the wheel of a stolen truck when she killed two Saskatoon teenagers and seriously injured a third.

Law expert weighs in on Peeteetuce and Taypotat sentences

Peeteetuce had almost double the legal limit of blood alcohol when she broadsided the teens’ car as she sped away from a police officer who had tried to pull her over.

James Paul Haughey and Sarah Wensley, both 17, were killed and a 16-year-old girl was badly hurt.

In May, Peeteetuce was granted statutory release from an Edmonton prison after serving two-thirds of her sentence, but her freedom included a condition that she abide by a curfew.

A police officer sent to check on her in August did not find her at home and she was arrested a few weeks later for breaching her release conditions.

The Parole Board of Canada held a hearing Nov. 30 to determine if Peeteetuce would be required to serve the remainder of her original sentence in addition to the 30 days she got for the breach.

Documents obtained by CKOM Radio in Saskatoon show she told the board she had missed her curfew check because she was babysitting for someone who failed to come home on time.

She said she was scared she would be sent back to prison, so she opted not to return home.

The parole board commended Peeteetuce for attending programming since her return to prison, but revoked her statutory release because “the circumstances surrounding (your) suspension were within your control.”

Peeteetuce has about a year left to serve.

“I wish she would have … felt remorseful, so remorseful about what she’d done … but it doesn’t look like she’s going in that direction,” Wensley said.

Court heard Peeteetuce was barrelling through an intersection at 90 km/h and made no attempt to brake when she hit the victims’ car.

James and Sarah were driving to a high school track practice.

Peeteetuce, who was 21 at the time of the crash, had three prior convictions for stealing vehicles.

The defence said Peeteetuce was born to an alcoholic mother who neglected her children and left her to live with relatives. At one point, her stepmother tried to drown her.

Peeteetuce first had a child at the age of 16 and then a son in 2013. The defence said she learned through Facebook that her son had suffered an opiate overdose while in the care of his father and she had to make a decision to take the boy off life support.

A 17-year-old passenger who was in the truck with Peeteetuce was sentenced to three years under the Youth Criminal Justice Act for her role in the crash.