Does Brian Kelly fit at LSU? Here's why that doesn't really matter

Brian Kelly has done a bunch of interviews of late discussing his earth-shattering move from Notre Dame to LSU.

He’s hyped up the power of the Tigers. Discussed the limitations of the Irish. Defended his timing of taking the job — leaving ND while the team was still in playoff contention. He even tried to explain his pronunciation of “FAM-u-lee.”

He told Sports Illustrated that’s how he always pronounces it, which doesn’t actually hold up. But whatever. It doesn’t matter. Of all the things to discuss about Kelly and LSU teaming up for a run at a national title, so-called cultural fit will prove to be the least consequential.

First off, all anyone in college football cares about is winning. If Kelly leads the Tigers to a national title, or at least back into serious contention, then Kelly will be hailed all over the state.

Whether he is at home at a crawfish boil or not isn’t really going to matter. 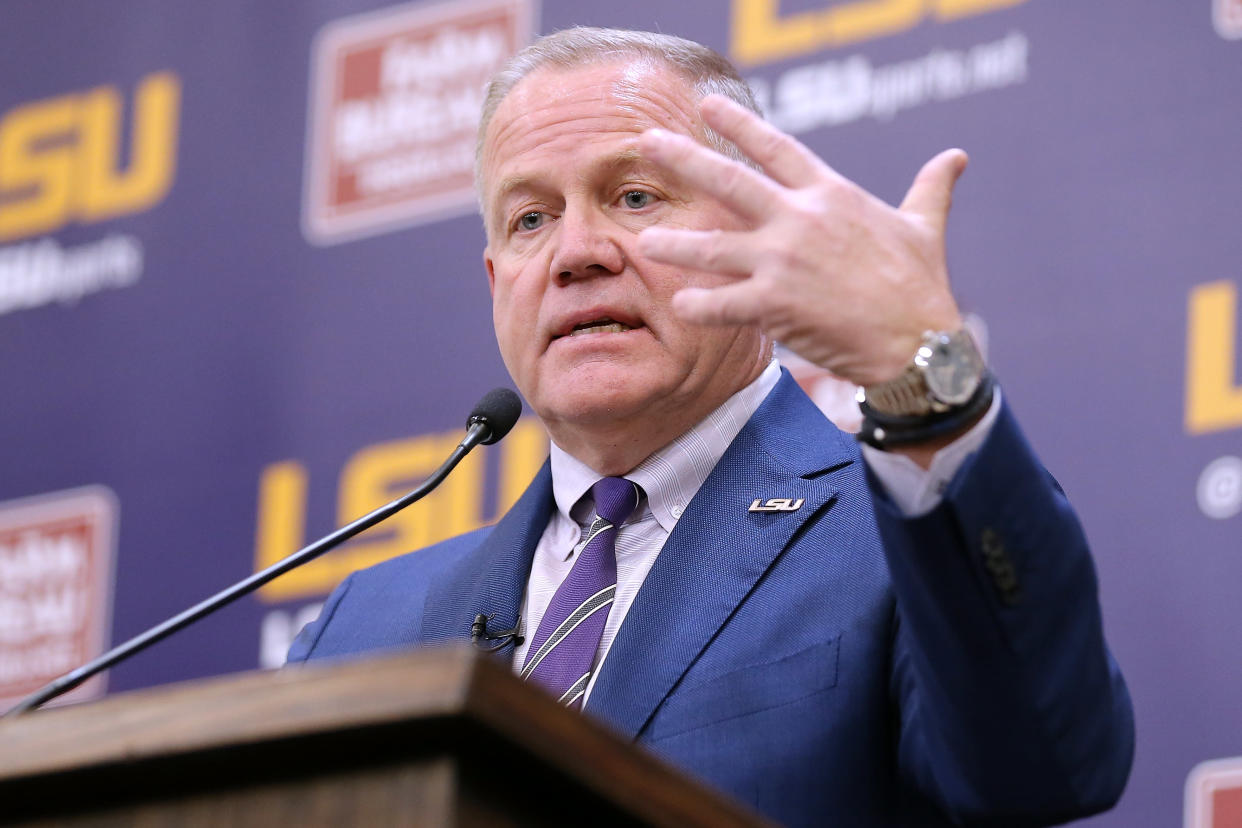 After all, LSU fired one of the most uniquely Louisiana coaches of all time, Ed Orgeron, just 19 months after he won a national title because the program was slipping fast. No amount of Cajun charm, no gravely throated accent, no amount of tears over understanding what the program means to the fans could save him.

“Everyone is like, ‘Aw, it’s going to be this white guy from the Midwest going down there and it’s going to be crazy!’” Kelly told SI. “There’s a little more spice to the food, maybe a little bit more roux than I’m used to, but it hasn’t really been an adjustment that I’ve felt like this is really outside of my comfort zone.”

The man is in Baton Rouge to coach, not cook.

And Brian Kelly can coach.

Is it enough to become the fourth LSU coach to win a national title since 2003, joining Nick Saban, Les Miles and Coach O? That’s a topic on the latest edition of the College Football Enquirer.

Kelly might. If nothing else, he’s proven to be a much better coach and leader of a program than both Miles and Orgeron. Saban, who rebuilt the program, is another level, of course.

Kelly won two national championships at Division II Grand Valley State (Michigan), captured a Mid-American Conference title at Central Michigan and went 34-6 at Cincinnati, including a 12-0 season. You don’t do all of that by accident, luck or just acquiring some talent.

At Notre Dame, he’s the winningest coach in program history and got the Irish to a BCS title game and two playoffs. They were non-competitive at that level, but there haven’t been too many programs that are competitive against Alabama and Clemson.

Kelly isn’t known as an ace recruiter — or a charismatic personality in nearly any setting. He was good enough to improve Notre Dame’s talent that it went from being forever hailed as nothing but hype to a top-10 program, though.

Kelly is counting on the institutional power of LSU to overcome that. Despite arriving just days before the early signing period last December, Kelly signed two Rivals.com five-star recruits in the Class of 2022. That’s the same amount as his last five Notre Dame recruiting classes.

In the Class of 2023, 11 of the top-100 recruits nationally per Rivals.com hail from Louisiana. That’s about par for the course.

Many years, LSU is going to get most of those guys. Maybe all. Kelly is even focused on working the northern part of the state — which big linemen tend to hail from but are less attached to the Tigers — to shore up a rare weakness.

After that, he said they will focus on Houston, East Texas, Atlanta, Florida, and some national recruits (where Kelly has lots of contacts) when needed. LSU always has talent. Kelly will get his.

Any recruit making a college choice based on the head coach’s gumbo recipe (or lack thereof for the Massachusetts native) probably isn’t worth much anyway. It’s not like Saban is known as a charmer, and he’s the one who is best at swiping prospects across the state border.

So Brian Kelly will have to win games. If he delivers, he’ll be beloved. If not, he’ll be fired like Orgeron and Miles.

Nothing else matters. This is college football, after all.

My husband spent $1000 on massages when he was meant to be getting baby essentials – am I unreasonable for being mad?