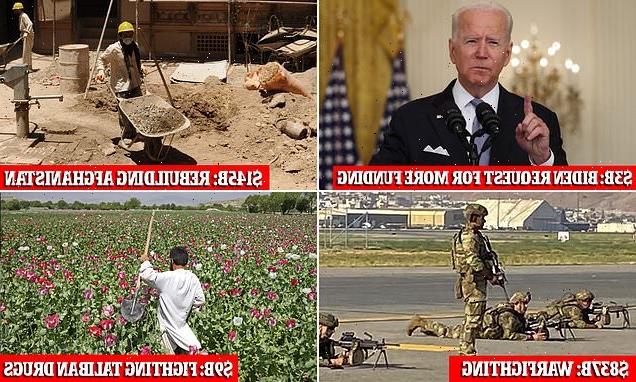 DOD watchdog tears into 'staggering' mistakes from Bush to Biden

$1 TRILLION worth of US failures in Afghanistan: DOD report tears into ‘mind-boggling’ mistakes from Bush to Biden, the US funneling money into corruption and advisors using ‘American TV shows’ for inspiration

A damning new government watchdog report on Afghanistan reconstruction revealed on Tuesday the ‘many failures’ of the last 20 years in the nation.

The report, which relied on 13 years of oversight work, more than 760 interviews and thousands of government documents, analyzed the progress of the last two decades, which it deemed ‘elusive’ and sustainability of that progress, ‘dubious.’

The report noted that the US has now spent $837 billion on warfighting and $145 billion trying to rebuild Afghanistan, during which 2,443 American troops and 66,000 Afghan troops were killed.

The nation has also spent $9 billion fighting Afghanistan’s opium and heroin trade, but instead it has grown. And when the Biden administration announced a withdrawal of all troops, it requested another $3.3 billion for Afghan security forces. 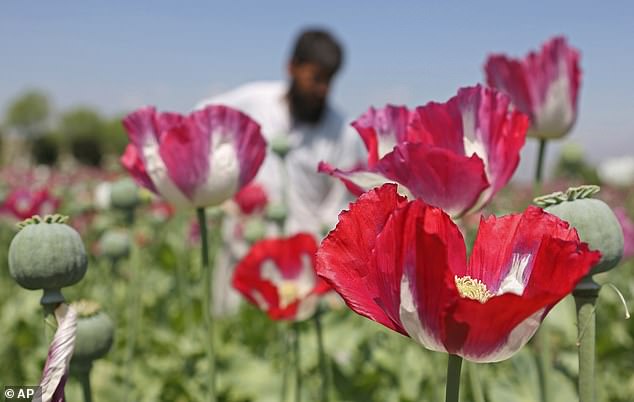 In this picture taken on Thursday, April 17, 2014, an Afghan farmer works on a poppy field collecting the green bulbs swollen with raw opium, the main ingredient in heroin, in the Khogyani district of Jalalabad, east of Kabul, Afghanistan. The US has spent $9 billion fighting drugs in Afghanistan but the drug trade has flourished 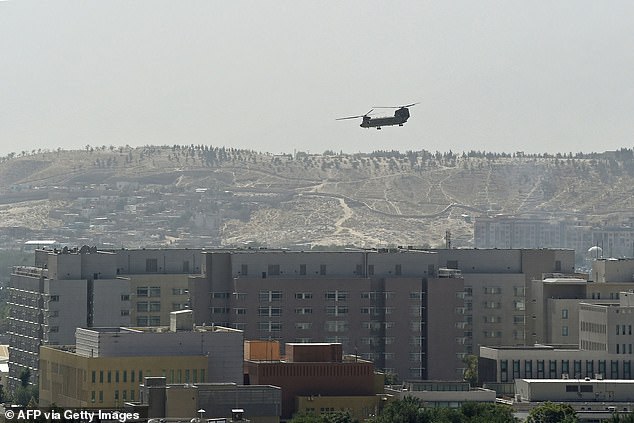 A U.S. Chinook military helicopter flies above the US embassy in Kabul on August 15, 2021. A watchdog report deemed US progress in Afghanistan ‘elusive’ and sustainability of that progress, ‘dubious’

‘Twenty years later, much has improved, and much has not. If the goal was to rebuild and leave behind a country that can sustain itself and pose little threat to U.S. national security interests, the overall picture is bleak,’ John Sopko, Special Inspector General for Afghanistan Reconstruction (SIGAR) wrote in the report entitled ‘What We Need to Learn: Lessons from Twenty Years of Afghanistan Reconstruction.’

The report did note advancements in health care, maternal health and education.

‘The extraordinary costs were meant to serve a purpose—though the definition of that purpose evolved over time,’ according to the report.

‘At various points, the U.S. government hoped to eliminate al-Qaeda, decimate the Taliban movement that hosted it, deny all terrorist groups a safe haven in Afghanistan, build Afghan security forces so they could deny terrorists a safe haven in the future, and help the civilian government become legitimate and capable enough to win the trust of Afghans.

Each goal, once accomplished, was thought to move the U.S. government one step closer to being able to depart.’

The report said that the US’ series of short term goals created ‘counterproductive cycles.’

When none of that worked, the U.S. government developed yet another short-term goal: withdrawing all troops almost immediately, even though it risked depriving the continuing reconstruction mission of the personnel needed to oversee security assistance.’

It said US officials underestimated the time and recourses it would take to rebuild Afghanistan, leading to short term solutions like the troop surge of 2009.

Over the years, the report claimed the US failed to implement a coherent strategy for what it hoped to achieve. The US implemented ‘unrealistic’ timelines that led to pouring money into nation building too quickly, which led to corruption.

‘Billions of reconstruction dollars were wasted as projects went unused or fell into disrepair.’

About 80 percent of Afghanistan’s budget is funded by the U.S. and other international donors, SIGAR found in a previous report.

‘I’d talk to infantry commanders and ask what they need, and they’d say, ‘Turn this money off. We’re having to look for people and projects to spend money on,’ one former senior USAID official told SIGAR.

‘The U.S. government’s inability to get the right people into the right jobs at the right times was one of the most significant failures of the mission,’ the report found.

Staff were poorly trained and there were not enough people tasked with overseeing funds being dispersed.

‘DOD police advisors watched American TV shows to learn about policing, civil affairs teams were mass-produced via PowerPoint presentations, and every agency experienced annual lobotomies as staff constantly rotated out, leaving successors to start from scratch and make similar mistakes all over again,’ the report found. 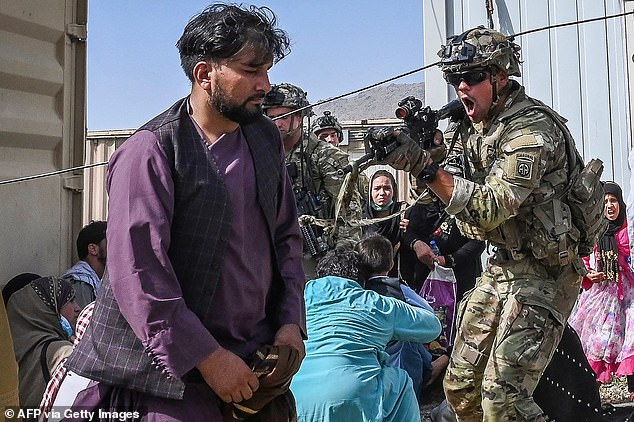 Thousands of Afghans are trying to get on to flights out of the capital following the Taliban’s seizure of the city. A US soldier is pictured aiming his weapon at a passenger at Kabul airport

Some improvements, at great cost

And when US forces arrived in 2001, Afghanistan at the fourth worst GDP per capita in the world. By 2020, when adjusted for inflation, that number had only moved up to eighth worst.

The report notes that from 2001 to 2018, life expectancy in Afghanistan had jumped from 56 to 65 and the mortality rate of children under 5 plummeted 50%, but said the gains are neither ‘sustainable’ nor ‘commensurate’ with US investment.

One former senior Defense official told SIGAR: ‘When you look at how much we spent and what we got for it, it’s mind boggling.’

It found that US officials did not understand how their intervention was being accepted socially and culturally.

SIGAR said that ‘for too long the U.S. government held onto the assumption that it was creating a transparent, rule-bound Afghan government from scratch in a way that would benefit the public.’

‘The U.S. government also clumsily forced Western technocratic models onto Afghan economic institutions; trained security forces in advanced weapon systems they could not understand, much less maintain; imposed formal rule of law on a country that addressed 80 to 90 percent of its disputes through informal means; and often struggled to understand or mitigate the cultural and social barriers to supporting women and girls.’

The report drew a parallel between the US position now and its position after Vietnam.

‘After all,’ the report said, ‘declining to prepare after Vietnam did not prevent the wars in Iraq and Afghanistan; instead, it ensured they would become quagmires.’

The report concluded: ‘There will likely be times in the future when insurgent control or influence over a particular area or population is deemed an imminent threat to U.S. interests.

If the U.S. government does not prepare for that likelihood, it may once again try to build the necessary knowledge and capacity on the fly. As seen in Afghanistan and Iraq, doing so has proven difficult, costly, and prone to avoidable mistakes.’

The conclusion comes amid chaotic scenes as the Taliban takes over Kabul and institutes a new rule over Afghanistan, as President Biden stands by his decision to bring US troops home.

Ashraf Ghani, first elected president of Afghanistan in 2014, fled the country and the Taliban declared their own leader to be president, as they overtook the presidential palace and parliament building.

For now, the US remains focused on evacuating embassy personnel and its allies.

Biden has said the swift takeover of Afghanistan proves that the US could never have created a stable, democratic government in the nation.

‘The events we’re seeing now are sadly proof that no amount of military force would ever deliver a stable, united, and secure Afghanistan — as known in history as the “graveyard of empires,’ Biden said in remarks on Monday.

‘What is happening now could just as easily have happened 5 years ago or 15 years in the future. We have to be honest: Our mission in Afghanistan has taken many missteps — made many missteps over the past two decades,’ he added.

‘I’m now the fourth American President to preside over war in Afghanistan — two Democrats and two Republicans. I will not pass this responsibly on — responsibility on to a fifth President.’