Consumer confidence has been battered in some of Melbourne's highest-income suburbs, where discretionary spending has fallen by more than 60 per cent.

But it is in lower and middle-income suburbs that the state's economic recovery from the COVID-19 recession could be waged.

Analysis of discretionary spending levels across Victoria shows people have tightened their purse strings in high-income suburbs in response to the uncertainties generated by the pandemic. 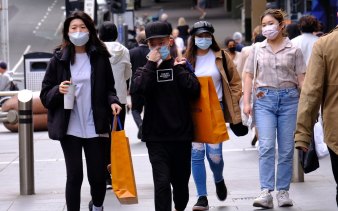 Snapshots of household spending taken in April, and in September-October, were created by credit bureau Illion and consultancy AlphaBeta. Their databases track the consumption patterns of hundreds of thousands of Australians, showing where they are spending their money.

It showed that in Stonington, which includes the leafy suburbs of Toorak, Malvern and South Yarra, discretionary spending was down by 61 per cent in September and October, compared with late last year.

Port Phillip, which includes Albert Park, South Melbourne and St Kilda, recorded a 68 per cent decrease in discretionary spending in September-October, after falling by 41 per cent in April.

In Monash, which has a higher-than average household income, discretionary spending was down by 62 per cent after falling to 46 per cent lower in April.

The figures paint a picture of two cities, with Melbourne's economic recovery largely being driven by spending in the inner-north.

Yarra, which includes Fitzroy and Collingwood, recorded sharp falls in discretionary spending in April – down by 77 per cent compared with last year. Since then, it has bounced back to 4 per cent above the rate late last year. 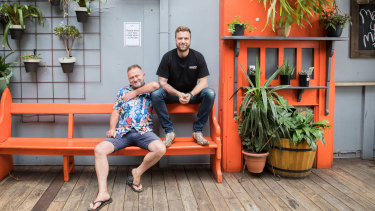 Chris Driscoll (left) and husband Keller Ross who own Sircuit and Mollies Bar and Diner in Fitzroy.Credit:Jason South

Businessman Chris Driscoll – who owns LGBTIQA venues Sircuit and Mollies Bar and Diner in Fitzroy – said demand had been strong after reopening.

"They [patrons] are looking for as much support from us as we can provide them, to reconnect with their own communities," he said.

"Really, people are happy and have been happy to follow or toe the line. Well, now they want an opportunity to reconnect."

Fellow bar owner, Kent Street's Tim McLean, said business had improved compared with two weeks ago, but his takings were still down 40 per cent compared with this time in November last year.

"We can't really do anything more than we're doing, because of the restrictions," he said.

There are strong signs of recovery in the City of Melbourne, too. City shoppers spent 68 per cent less in April compared with last year, but that rate improved to 23 per cent below baseline by September-October.

In Moreland, spending fell by 56 per cent in April, but had recovered to 21 per cent below normal.

Andrew Charlton, director of AlphaBeta, said the data showed the impact stimulus payments had made in supporting lower-income households.

"The spending pattern over the last year is economics 101," he said.

"At the peak of the crisis, the most affluent suburbs tightened their belts, but other typically lower to middle-income suburbs emerged as the clear leaders in keeping the economy and our communities going.

"Now, with our borders closed, higher income people have realised that they have managed to save a significant amount, they’re not going on their overseas holidays and they are ready to spend up."