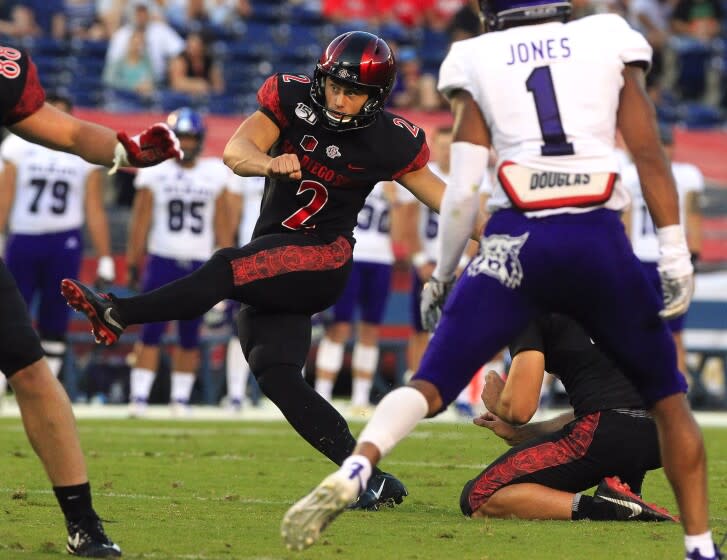 Diary entries from a young woman at the center of a lawsuit alleging she was gang raped last year by NFL player Matt Araiza and two of his former San Diego State University teammates detail what she says occurred and the trauma she suffered in the aftermath.

“All I keep replaying in my mind is being face down in a random bed just waiting for it to be over,” wrote the woman, who was a 17-year-old high school senior at the time of the alleged assault.

The pages, tweeted publicly Friday by her attorney Daniel Gilleon, offer details of the emotional toll she faced after filing a police report and undergoing a rape exam a day after she was allegedly gang-raped in October at a party just blocks from the campus. The diary, which the young woman started after the alleged rape, was previously reviewed by The Times.

Araiza’s attorney, Kerry Armstrong, has denied the rape accusation and called the lawsuit a “shakedown.” He said his investigator talked to witnesses from the party who contradict the claim.

Now 18, the woman told The Times on Thursday after her lawsuit had been filed that she hopes that those she has accused of rape will be held accountable. The suit also names Xavier Leonard and Pa’a Ewaliko.

“They weren’t affected by what they did, and they probably felt like it was something that they would never have to face consequences for. That makes me sick,” she said.

The young woman previously told The Times that she had drifted in and out of consciousness during the alleged assault. The diary states that her memory of the incident was hazy, and no suspect was identified in its pages. Defendants named in the lawsuit were based off of pretext calls — recorded by detectives — she had with men whom police “had determined were present in the room when the rape occurred.”

Araiza, the lawsuit alleged, confirmed on a call in late October that he and the young woman had sex and recommended she get tested for a sexually transmitted disease.

Detectives guided her during the calls, according to a Times review of text exchanges between her and police.

This journal written by my client a day after the @matt_araiza assault is powerful but heartbreaking. pic.twitter.com/oJF2JeGGrh

Attorney Jamahl Kersey, who is representing Leonard, said Friday that he had no additional comment. Attorney Marc Xavier Carlos, representing Ewaliko, could not be reached Friday.

Email communications reviewed by The Times show that Gilleon was in contact with the Bills’ general counsel on Aug. 1 and said on Aug. 14 that he was going to proceed with legal action.

Araiza, whose powerful and precision kicking in college earned him the moniker “Punt God,” became a starter earlier this week when the Bills released their veteran punter.

In a statement on Thursday, the Bills said the organization had recently been “made aware of a civil complaint involving Matt from October 2021″ and had “conducted a thorough examination of this matter.” The statement did not elaborate.

Gilleon on Thursday also tweeted a text message exchange between him and Araiza’s criminal defense attorney that he says shows an attempt was made to settle before the lawsuit was filed and Araiza was named the Bills’ starting punter.

“Kerry Armstrong is calling my client’s lawsuit a ‘shakedown,’ but he offered money before his client was a Buffalo Bill and we ignored the offer,” attorney Daniel Gilleon tweeted in response to a comment attorney Armstrong made to The Times about the civil suit.

In the exchange, he references previous communications with Armstrong and advises him to instruct Araiza to get a civil defense attorney to handle “the current crisis” prior to a suit, according to the early August texts. Armstrong responds that his client would likely “never be interested in settling.” Armstrong then says that Araiza’s parents had inquired about the monetary amount Gilleon’s client wanted and warns that if Gilleon “keeps calling the Bills and he gets cut, there will be no money to get.”

Gilleon shared the messages hours after his office filed the lawsuit.

Armstrong, who was in court Friday morning, told The Times by email that he was “stunned” Gilleon had posted the communications.

“The texts clearly show that Matt Araiza was not interested in any type of civil settlement with his accuser. Rather, his PARENTS personally reached out to me and asked if I would simply find out how much money the woman is seeking,” Armstrong said.

No arrests have been made and authorities have not publicly identified any suspects in the criminal investigation.

San Diego Police have handed the case to the district attorney’s office and San Diego State launched a Title IX review in July, more than nine months after the alleged rape occurred. Title IX is the federal investigation that prohibits discrimination at federally-funded educational institutions on the basis of sex. Araiza and Ewaliko are no longer at the school and are not required to comply with an investigation.

The NFL’s Personnel Conduct Policy, which prohibits sexual misconduct and outlines procedures for suspected violations, does not apply to incidents that occurred before a player is drafted or joins a team. If criminal charges were filed against Araiza, he would then be subject to a league investigation and potential disciplinary action, according to the policy.

“This was a horrific crime, the kind of which happens all too often,” Gilleon said in a statement. “What makes these crimes different is not only that they were committed by self-entitled athletes. Just as awful as the crimes, for months, multiple organizations — SDSU, the San Diego Police Department, the San Diego district attorney, and now the Buffalo Bills — have acted the part of enablers looking the other way in denial that my client deserves justice even if the defendants are prized athletes.”

Shia LaBeouf Admits He ‘F*cked Up’ While Addressing Abuse Allegations: ‘I Hurt That Woman’
World News