Home » World News » Democrat hypocrites are undermining COVID with ‘do as I say, not as I do’ attitude 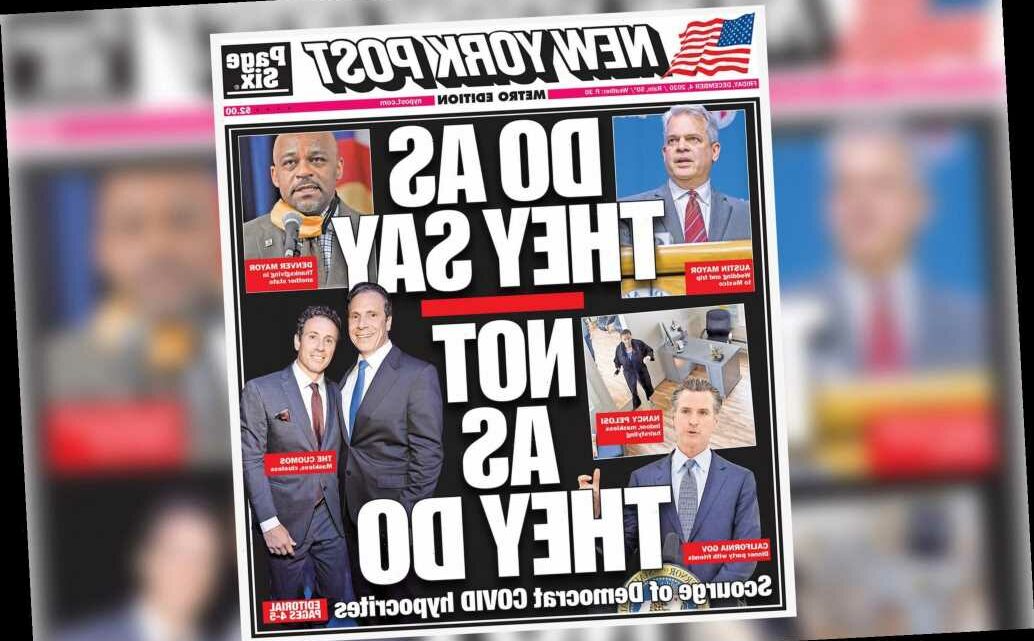 Democrat hypocrites are undermining COVID with ‘do as I say, not as I do’ attitude

Biden speaks with Fauci, asks him to be ‘chief medical adviser’

As the nation tires of quarantines, boredom and loneliness, the same politicians who find glee in slapping wrists and dooming small businesses regularly break the rules, in letter and in spirit, when they want to.

California Gov. Gavin Newsom, dining maskless and indoors with lobbyists at the tony French Laundry restaurant the same week he warned against Thanksgiving gatherings. Chicago Mayor Lori Lightfoot, having her hair done and joining in a riotous Joe Biden victory celebration in violation of her own restrictions — then having the gall to call her actions “essential ­activities.”

House Speaker Nancy Pelosi, unmasked at a hair salon that wasn’t even supposed to be open, even as she decried President Trump’s reluctance to wear his mask — then claiming she’d been entrapped.

Denver Mayor Michael Hancock, telling citizens not to travel for the holidays — then boarding a plane to Mississippi not an hour later.

Austin, Texas, Mayor Steve Adler recording a video telling people to stay home — filming it in a timeshare in Cabo, having flown to Mexico on a private jet.

And Gov. Cuomo, planning a family Thanksgiving that broke his own rules for everyone else (until he was called out for it). It runs in the family: His brother Chris lectures on safety at CNN, but has broken nearly every COVID-19 protocol on multiple occasions, even breaking quarantine after testing positive.

The hypocrisy was bad enough when the likes of de Blasio were cracking down on religious gatherings even as they gave a pass to Black Lives Matter protesters. Gathering with family on Thanksgiving risked a fine for risking public health, but not marching with hundreds of strangers to smash windows and set dumpsters on fires.

All these hypocrites are Democrats, and most of them proud progressives.

Proud posers is more like it. Video shows a Pennsylvania state representative referring to mask-wearing as “political theater” as he discussed with Gov. Tom Wolf whether to wear them for a press conference.

Hypocrisy is by no means limited to the left side of the spectrum; you can even argue that violations in secret (until they got caught) are just simple human failing. But many of these politicians flaunted their rule-breaking in public, only to cite some BS reason why it was OK.

And that sanctimoniousness, we’d argue, is a peculiarly progressive vice: These politicians are certain they not only know better than the little people, but that they have a moral right to dictate detailed choices to struggling business owners, desperate single moms and everyone else facing dire dilemmas as they balance safety and keeping life ­together.

We are seeing more civil disobedience, like that bar protest in Staten Island, precisely because Democrats are not practicing what they preach.

It’s that arrogance that leads you to make a mockery of a threat that has killed more than 1.5 million, and then rub it in the faces of the most vulnerable.

One of the biggest scolds of the coronavirus pandemic, Newsom attended a birthday party for a friend at Michelin-starred restaurant French Laundry.

He was only caught because someone took a picture of Newsom’s table, after which the governor said “while our family followed the restaurant’s health protocols and took safety precautions, we should have modeled better behavior and not joined the dinner.”

French Laundry is apparently the Achilles Heel of Democrats. Breed also attended a birthday there on another night. Three days after eating in the Napa Valley restaurant, she banned all indoor dining in San Francisco. This week, Breed said, “The truth is we’re going to have to take more restrictive action and it pains me to say that.”

Restrictive action for those who don’t have the resources to leave the city and find places with a $450-per-person dinner menu.

“Research shows that masks reduce transmission of the coronavirus,” she said in July. “Wearing masks in public should be mandatory. Period.”

Feinstein, 87, has been spotted a number of times speaking to colleagues at the Capitol without wearing a mask.

“With the continued rise in cases, I’m urging you to refrain from travel this Thanksgiving holiday. For my family that means cancelling our traditional gathering of our extended family,” Hancock wrote in an e-mail to his city staff.

But they didn’t cancel. Just after the e-mail, Hancock flew to Mississippi to spend Thanksgiving with his daughter.

After a fierce backlash, Hancock, admitted that “ my decision was unwise and hypocritical — a mistake that I want to deeply apologize for. My job as Mayor is to not only help come up with safe practices for the entire city. It’s also to set an example, and on that measure, I failed.”

“We need to stay home if you can,” Adler told his constituents in November via Facebook video. “This is not the time to relax. We are going to be looking really closely. . . . We may have to close things down if we are not careful.”

Except Adler recorded this message in Cabo San Lucas, Mexico, where he was vacationing at the family timeshare — after having attended the wedding of his daughter at an Austin hotel with 20 guests.

Though his own health officials recommended no more than 10 people in groups at the time, Adler claimed all the guests had rapid COVID-19 tests, an excuse not granted to the people he represents.

This week, she voted to ban outdoor dining in Los Angeles County. Hours later, she was eating outdoors at a Santa Monica restaurant.

“She did dine al fresco at Il Forno on the very last day it was permissible,” her spokesman said to local TV station Fox 11. “She loves Il Forno, has been saddened to see it, like so many restaurants, suffer from a decline in revenue. She ate there, taking appropriate precautions, and sadly will not dine there again until our Public Health Orders permit.”

“I’m like wait a minute, restaurants are so dangerous, but you’re gonna go eat in a restaurant?” Josiah Citrin, who owns restaurants in the LA area, told the station. “I mean it just blows me away.”

What, your own policies prevent dining in the city you govern? No problem, just travel out of town to eat indoors in Chesapeake Bay, as Kenney did in August.

“Hi @phillymayor!!!” wrote Philadelphia chef Marc Vetri. “Glad you’re enjoying indoor dining with no social distancing or mask wearing in Maryland tonight while restaurants here in Philly close, suffer and fight for every nickel just to survive. I guess all your press briefings and your narrative of unsafe indoor dining don’t apply to you. Thank you for clearing it all up for us tonight.”

After bemoaning how families couldn’t be together for Thanksgiving, Gov. Cuomo casually mentioned that two of his daughters and his 89-year-old mother would be joining him for the holiday.

Cuomo is one of the only ones on this list who was found out before he was a hypocrite. He canceled the dinner — but why did it take a backlash for him to realize what was wrong?

CNN’s top COVID lecturer was bashed by his own landlord for failing to wear a mask in common areas. Even as the anchor was bashing President Trump for not wearing one during events.

“You have been observed entering and exiting the building and riding the elevator without the required face coverings,” an August letter to Cuomo from his landlord said. “Even though staff members have asked you to comply with this requirement, you have refused to do so. This is a violation of the Executive Order, building policy, and places other residents and our staff at risk. There are no exceptions to this rule, and you are required to comply.”

“There are times when we actually do need to have a relief and come together,” Lightfoot told MSNBC when called out on her hypocrisy. “And I felt like that was one of those times. That crowd was gathered whether I was there or not. But this has been a super hard year on everyone.”

Democratic speaker of the House

Queen of the hypocrites. While San Francisco shut down businesses in draconian fashion, she was caught, maskless, getting her hair styled. At the time, salons were only allowed to offer outdoor services.

Pelosi’s ’do was done by an independent stylist without knowledge of salon owner Erica Kious, who described it as “a slap in the face that she went in, you know, that she feels that she can just go and get her stuff done while no one else can go in, and I can’t work.”

Pelosi’s response? “It was clearly a setup,” she whined. “This salon owes me an apology.”