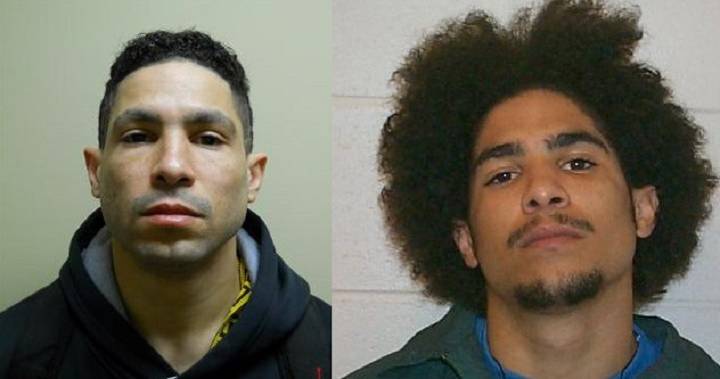 As police agencies across the region continue to hunt for a man accused of shooting a Vancouver Transit Police officer, court documents are shedding more light on the suspect.

Daon Glasgow has a criminal record including a B.C. conviction for drug trafficking and major theft charges from Ontario. He was wanted on a Canada-wide warrant for being unlawfully at large at the time of Wednesday’s shooting.

Glasgow pleaded guilty in 2011 to manslaughter in the 2010 shooting death of Terry Scott in a McDonald’s bathroom during a drug deal gone wrong.

After that shooting, which happened a stone’s throw from where Vancouver Transit Police officer Josh Harms was shot, Glasgow managed to evade police for several weeks.

Now, documents from the Parole Board of Canada reveal officials had significant reservations about his potential for rehabilitation.

However, the document also reveals a troubling history in prison and reservations about Glasgow’s behaviour should he be released.

“It is obvious to the Board that you have ingrained criminal values and appear comfortable with a lifestyle characterized by anti-social values and attitudes,” reads the document, referencing Glasgow’s history of violence and drug crime.

It also notes his repeated failure to abide by court-ordered conditions and repeated instances of being unlawfully at large.

The decision makes specific note of the fact that the 2010 killing Glasgow perpetrated took place while he was on statutory release from a previous federal conviction.

“This pattern clearly demonstrates that you disregard the rules that are put in place to manage your risk in the community. It speaks to your inability to abide by expectations.”

The parole board document also details Glasgow’s failure to make progress while in prison.

It states that he was caught at one point with more than $3,000 of drugs on him while in custody, that he was moved into maximum security during his incarceration and that he spent periods in solitary confinement.

“You have also been found in possession of a shank (homemade weapon) and refused to provide for urinalysis,” it notes.

According to the board, Glasgow was previously granted statutory release back in December 2016 — only to have it revoked the following month when “concerning items” were found in his room and he tested positive for THC.

According to the parole board document, Glasgow had failed to complete any rehabilitation programs since 2016.

It says a statistical model put Glasgow at a lower risk to re-offend, however, his 2014 psychological assessment “indicates [he presents] an overall moderate-high risk for violent re-offending and a high risk for general re-offending.”

In granting release, the board concluded that Glasgow had failed to make any positive changes and that there was a “significant” potential for him to be involved in future crimes.

“Your continuous failure to abide by conditions and expectations on release does not give the Board any confidence that you will follow rules and regulations on this upcoming release,” it added.

According to the parole board, Glasgow specifically asked to be released into the Lower Mainland, despite not having any supports in the area.

Glasgow was released under the following conditions.