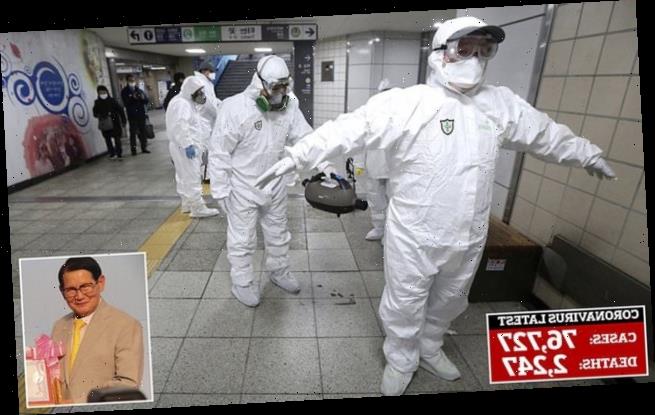 The leader of a ‘cult’ at the centre of South Korea’s coronavirus crisis has today labelled the outbreak ‘the devil’s deed’.

Lee Man-Hee declared the virus a ‘test of faith’ after services at the Shincheonji Church of Jesus were widely blamed for spreading the virus.

A 61-year-old woman known as ‘Patient 31’ is feared to have infected dozens after attending the movement’s services in the city of Daegu.

South Korean officials have confirmed 100 new cases of the virus today, 85 of them linked to the secretive church.

The new cases have nearly doubled the total of virus cases in South Korea from 104 to 204 amid fears that Daegu could become the ‘new Wuhan’.

Experts believe the tight-knit gatherings are an ideal breeding ground for the virus and president Moon Jae-in has today called for a ‘thorough investigation’. 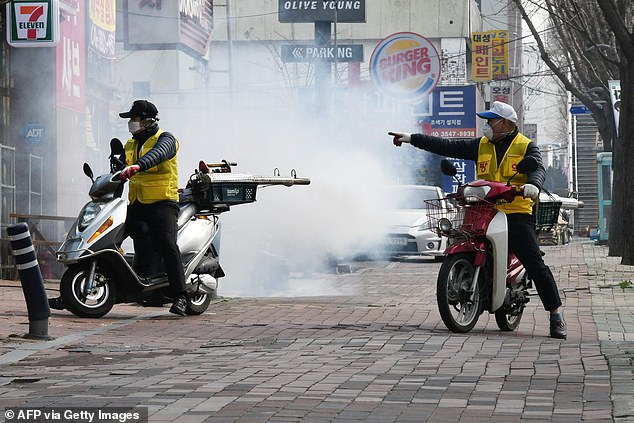 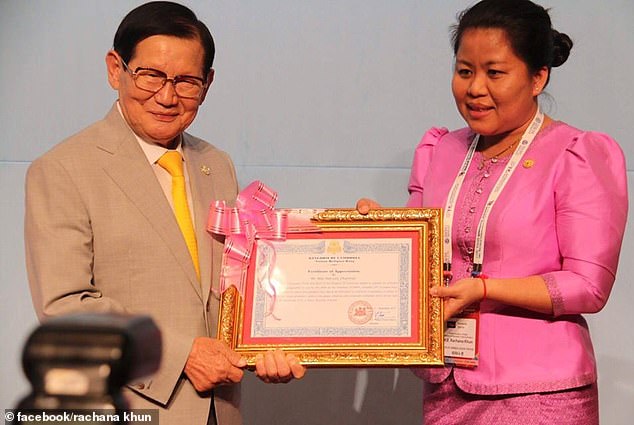 The movement’s leader and self-proclaimed messiah Lee Man-hee rallied his troops today in a message sent on an internal app.

‘This disease case is seen as the devil’s deed to stop the rapid growth of Shincheonji,’ he wrote in the message, according to Yonhap news agency.

‘Just like the tests Job went through, it is to destroy our advancement,’ he said, referring to the Biblical figure.

A total of 100 new cases were today confirmed by the Korea Centers for Disease Control and Prevention (KCDC), 85 of them connected to the Shincheonji church. It brings the total in South Korea to 204.

As of today, more than 400 members of the church are showing symptoms of the disease, Daegu mayor Kwon Young-jin said at a briefing.

Tests are still ongoing, and officials in Seoul say they are closing branches of the Shincheonji church in the capital.

Workers on motorcycles have been spraying disinfectant outside the Shincheonji church in Daegu.

One passer-by Seo Dong-min, 24, said: ‘With so many confirmed cases here I’m worried that Daegu will become the second Wuhan.’ 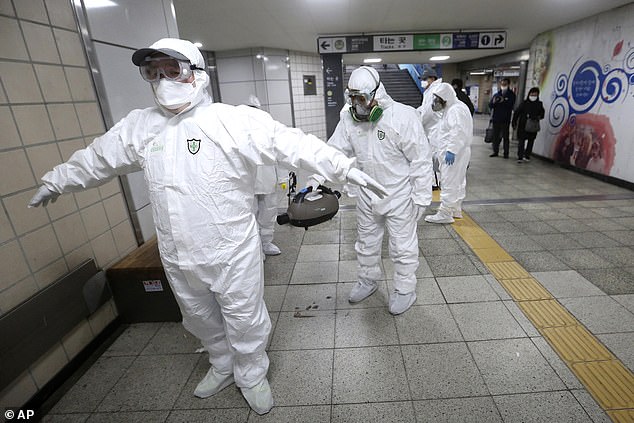 President Moon has called for officials to investigate the church services as well as a funeral service at a hospital nearby which was attended by many church members.

That hospital was also home to the first coronavirus patient to die in South Korea, though officials were still seeking to confirm his exact cause of death.

‘We need a thorough investigation on the church and the funeral attendees,’ Moon said.

Lee called on his followers to obey instructions from government authorities and to avoid holding meetings.

‘The victims of the disease now are the Shincheonji believers,’ he said. ‘Let’s also overcome this trial.’

The church has blamed the 61-year-old woman for the spread of the disease, saying it has been advising followers since late January to stay home if they had symptoms.

Little is known about the ‘patient zero’ except that the woman in her early 60s had no recent record of overseas travel and was diagnosed with pneumonia last weekend.

Church officials said the woman assumed she was having the common cold.

She had initially resisted doctors’ recommendations to get tested for the virus, according to the Korea Centers for Disease Control and Prevention.

Some 1,000 Shincheonji church followers who attended Sunday services with her have been quarantined at their homes while authorities screen them for the virus.

Health authorities are also trying to monitor thousands of others. 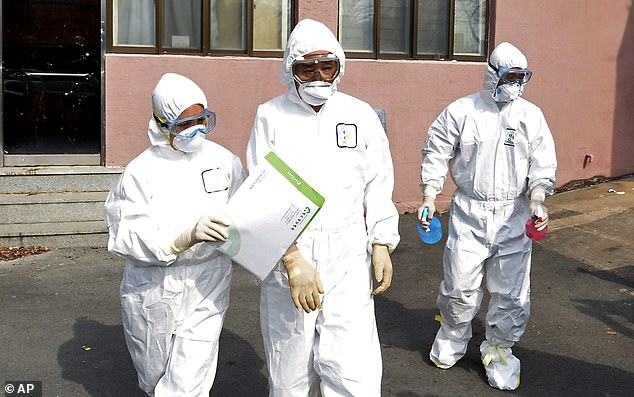 A confirmed COVID-19 patient, center, is escorted by a medical staffer toward an ambulance at Daenam Hospital in Cheongdo today

Shincheonji, which claims 200,000 followers in South Korea, has now told members to instead watch its services on YouTube.

The movement, which translates as ‘new heaven and new earth,’ was established in 1984 and describes its founder Lee as the ‘Promised Pastor’, an attendant of Jesus.

He has widely been described by other Christian groups as a false prophet or a cult leader.

‘To propagate their belief, they often approach their relatives and acquaintances or sneak to other churches without telling them they are Shincheonji members.’

Tark said Shincheonji followers are likely more vulnerable to virus infections as they often sit very closely on the floor during services.

At Shincheonji, attending church-related gatherings ‘isn’t an option, but a requirement,’ he said.

The church said in a statement it was fully cooperating with government quarantine efforts and accused mainstream church groups of spreading false claims, such as that it initially instructed followers to keep silent about the illness.