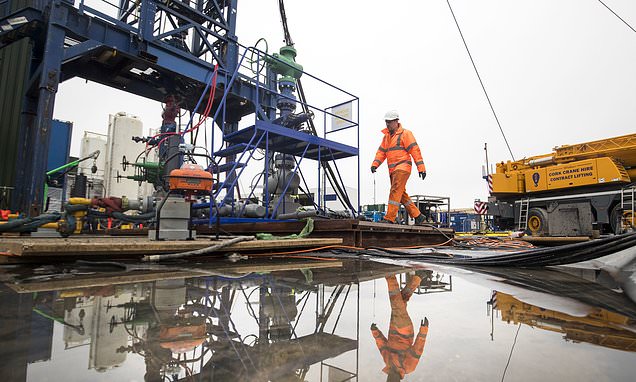 Energy firm Cuadrilla has paused fracking operations in Lancashire for the third time in two months after being struck by nine tremors in one morning.

A series of ‘micro-seismic events’ in Blackpool were recorded on the British Geological Survey website following hydraulic fracturing at the shale gas exploration site at Preston New Road.

The tremors started at 9.40am, with the ninth and last tremor, at 1.5 magnitude, is the largest recorded since fracking started.

This is a red event under the traffic light system in place for monitoring seismic events during fracking, leading to a temporary halt to operations. 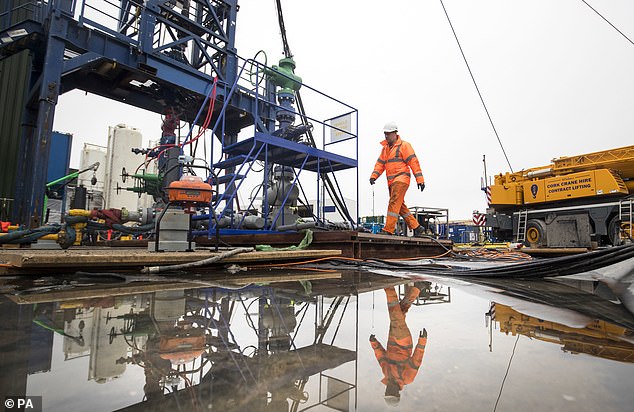 A Cuadrilla spokesman said: ‘A series of micro seismic events have been recorded following hydraulic fracturing at our shale gas exploration site in Lancashire.

‘The largest recorded was 1.5ML (local magnitude) at about 11.20am. This occurred after hydraulic fracturing had finished for the day.

‘According to recent research by the University of Liverpool the impact would be like dropping a melon.

‘A series of smaller micro seismic events occurred during hydraulic fracturing, beginning at about 9.40am.

‘Cuadrilla will pause and continue to monitor micro seismicity for at least the next 18 hours, in line with the traffic light system regulations.

‘Well integrity has been checked and verified.’

The spokesman added: ‘These are very, very low level tremors.

‘They have only been recorded because of the specialist surface monitoring equipment we are using.

‘This is the most monitored patch of land in the entire country, but people need not worry about the frequency of these recordings.’ 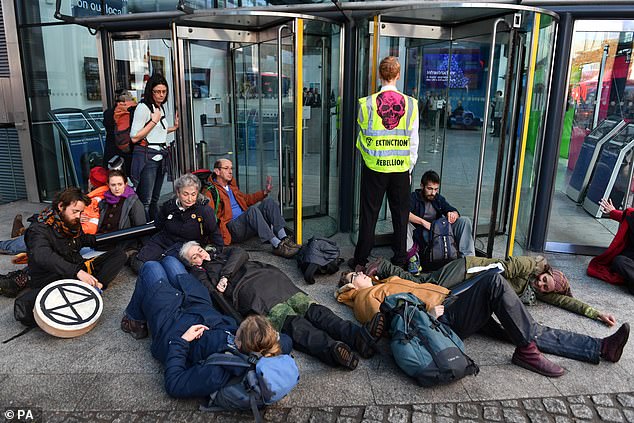 Activists from Extinction Rebellion during an anti-fracking protest outside the Department for Business, Energy and Industrial Strategy in Westminster, London, on November 14

The British Geological Survey (BGS) confirmed the ninth and last tremor, at 1.5 magnitude is the largest recorded since fracking started.

A number of tremors have been detected at the Preston New Road site since fracking began on October 15.

But work only whenever a quake of magnitude 0.5 or more is detected under the rules.

According to the BGS, earthquakes with a magnitude of less than two are not usually felt and, if they are, it is only by people very close to the earthquake.

Tony Bosworth, Friends of the Earth campaigner, said: ‘Within a day of Cuadrilla re-starting fracking in Lancashire, there has already been another earthquake which means they’ve had to down tools.

‘It appears that they cannot frack without triggering tremors.

‘And instead of acknowledging that fracking needs to end, Cuadrilla are instead urging for regulations around earthquakes to be relaxed.

‘We’ve always said that fracking poses risks for our climate and environment. After today’s quake, and with the effects of climate breakdown already happening around us, isn’t it time to put a stop to fracking once and for all?’

Test drilling at the site was suspended in 2011 after two tremors, one of 2..3 magnitude and the other of 1.5 in April and May of that year respectively.

But in October the green-light was given to resume fracking after seven years by Mr Justice Supperstone at the High Court in London.

It followed environmental campaigner Bob Dennett failing in a bid for an injunction preventing Cuadrilla from shale gas exploration.

He instead urged the government to ditch ‘its reckless dash for gas and invest instead in a renewable revolution of solar, wind and tidal power’.

Does fracking cause earthquakes?

Earthquakes are usually caused when rock underground suddenly breaks along a fault.

This sudden release of energy causes the seismic waves that make the ground shake, and in extreme cases can even split the Earth’s crust up to its surface.

Fracking works by injecting huge volumes of water into the rocks surrounding a natural gas deposit or hydrothermal well.

The water fractures the rocks, creating dozens of cracks through which gas and heat can escape to the surface.

Fracking can cause earthquakes by introducing water to faultlines, lubricating the rocks and making them more likely to slip.

When two blocks of rock or two plates rub together, they catch on one another.

The rocks are still pushing against each other, but not moving, building pressure that is only released when the rocks break.

During the earthquake and afterward, the plates or blocks of rock start moving, and they continue to move until they get stuck again.