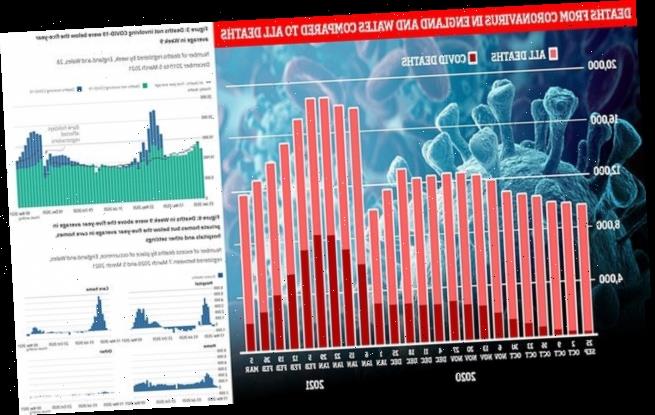 Weekly Covid deaths in England and Wales have nearly HALVED in a fortnight to 2,100 as fatalities drop to lowest levels since before second wave took off in November

Weekly Covid deaths have almost halved in a fortnight and dropped to their lowest levels since before the second wave took off in the autumn, official figures revealed today.

Office for National Statistics (ONS) data showed 2,105 fatalities were linked to the virus in England and Wales over the seven days to March 5 — a 48 per cent dip on the 4,079 in the week ending February 19.

This was the lowest number of Covid deaths since the first week of November, when England was plunged into a second national lockdown to curb the then-spiralling outbreak. For comparison, weekly deaths surpassed 8,000 during the darkest part of the second wave in January.

Coronavirus deaths among care home residents — who were first to be vaccinated — have also almost halved in a fortnight, dropping from 969 to 467.

But deaths from all causes — including dementia, heart disease and Covid — remained almost four per cent above the average for this time of year or 409 fatalities, suggesting the virus was still adding to the toll.

Additionally, the number of victims linked to flu and pneumonia was above those linked to Covid for the first time in 2021. But it was listed as the underlying cause of death for fewer than a fifth of those that had the virus in this category.

The Department of Health publishes a daily Covid death toll which has already shown a sharper dip in fatalities.

But the figures from statisticians at the ONS lag behind by about two weeks because they are asked to go through every death certificate to pick out all those mentioning the virus, alongside fatalities from other causes.

Data today also revealed the deadliest day of the pandemic took place in the second wave, after 1,463 fatalities linked to the virus were confirmed on January 19. For comparison, in the first wave Covid deaths hit a height of 1,459 fatalities on April 8. 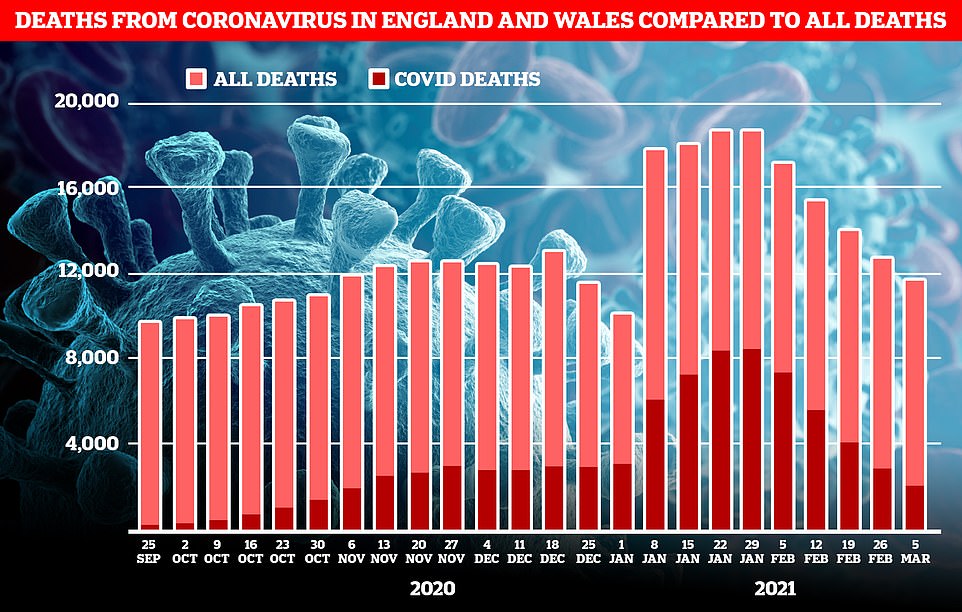 Covid deaths have halved over the two weeks to March 5, ONS figures show. There were 2,105 fatalities linked to the virus in the week to March 5, the latest available, but more than 4,000 two weeks beforehand. 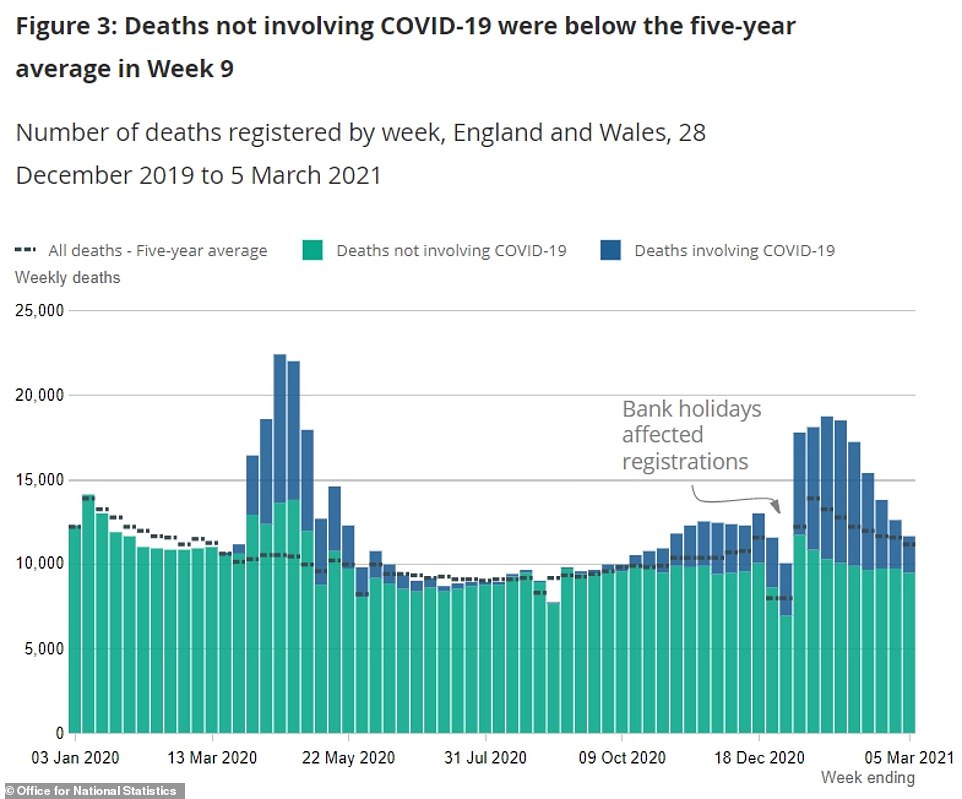 But deaths from all causes – including dementia, heart disease and Covid – have remained above the five-year average in England and Wales for the number expected, suggesting the virus is still taking a disproportionate toll on the population 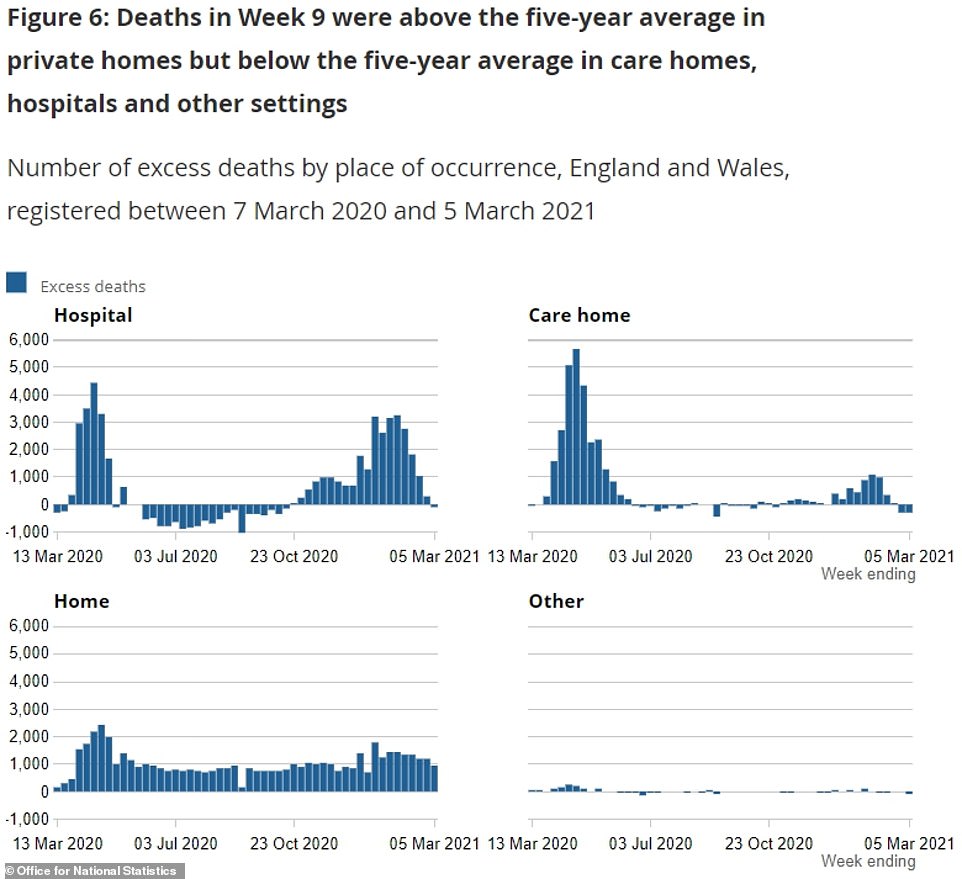 Covid deaths among care home residents also almost halved in the fortnight to March 5. Ministers have now reopened homes to allow one visitor for each resident, but they must wear PPE and have tested negative for the virus 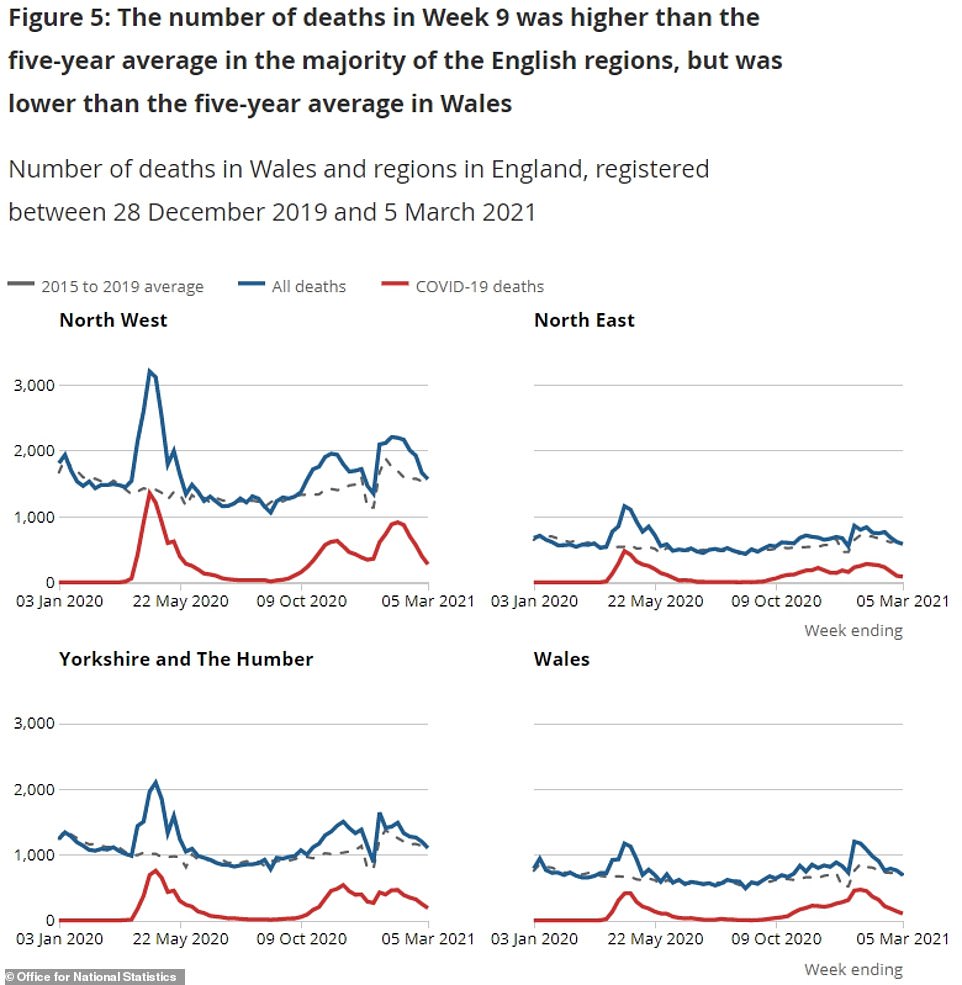 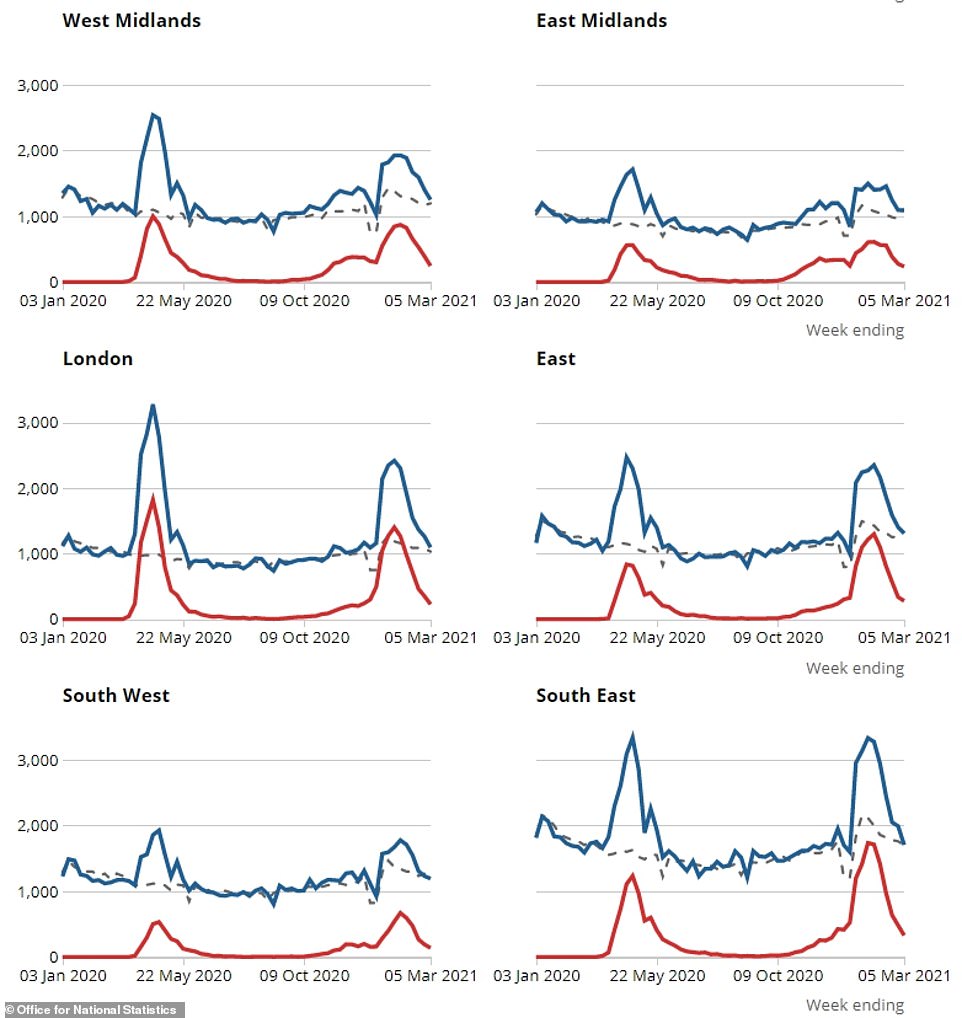 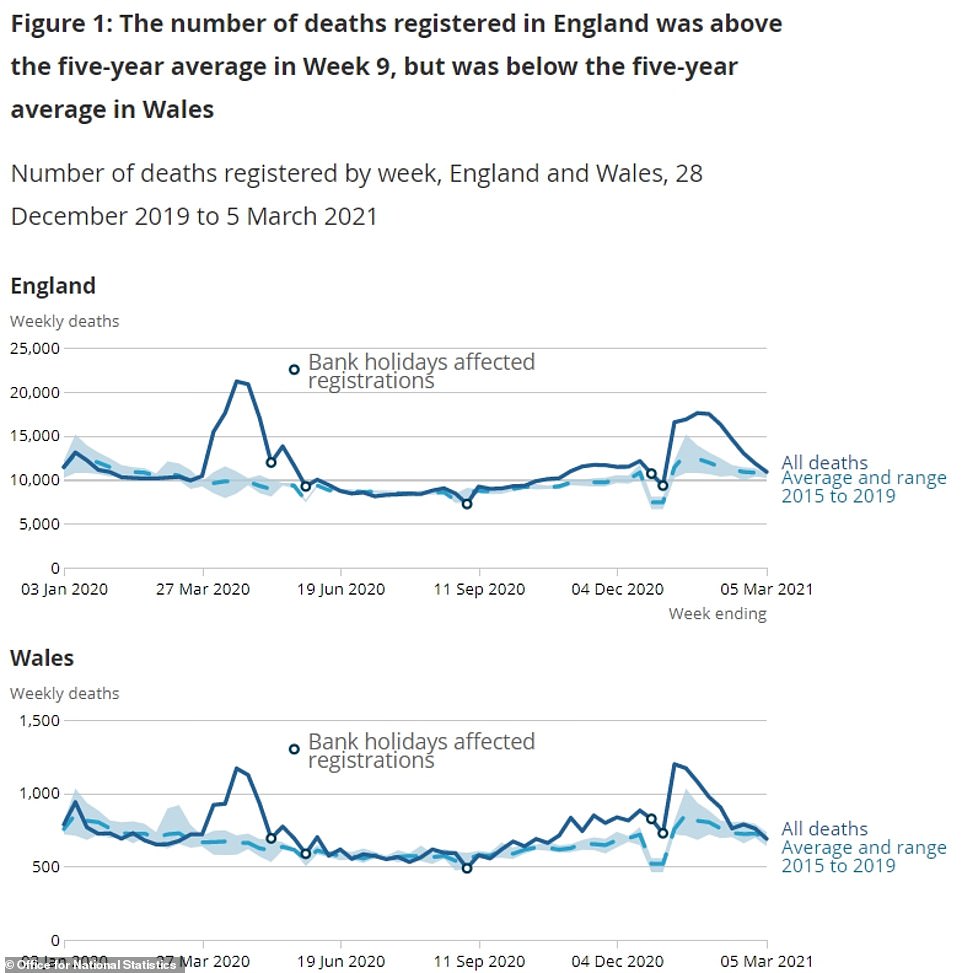 The ONS goes through all death certificates registered in England and Wales to establish the main causes of death. It found fatalities remained above average in the week to March 5, the latest available

Britain recorded an eight per cent week-on-week rise in Covid cases yesterday — even though they are still at levels seen in September before the second wave spiralled out of control.

Department of Health bosses posted another 5,089 positive tests and 64 coronavirus victims. Deaths have fallen by just 1.5 per cent on last Monday’s count.

Cases began to creep upwards last week following a massive spike in Covid tests being carried out because of schools finally being allowed to reopen in England. But the test positivity rate — one of the best ways of tracking the size of the outbreak — has continued to fall.

Surveillance studies analysing the size of Britain’s second wave also say it is still shrinking amid mounting pressure on Boris Johnson from Tory MPs to speed up his cautious lockdown-easing plans.

ONS data showed there were 467 Covid-linked deaths among care home residents in the week to March 5, almost half of the 969 registered two weeks beforehand.

It was also the lowest level since November 12, when there were 401 Covid-linked fatalities in the most vulnerable group.

Overall, there were 11,592 deaths from all causes, which was almost four per cent above the 11,183 expected at this time of year.

Covid deaths made up 18 per cent of the total fatalities, down on the 23 per cent in the previous week.

There were also 2,350 deaths that involved flu and pneumonia in the week to March 5, but only 308 had this recorded as the underlying cause of death.

For comparison, 1,685 Covid deaths had the virus marked as the underlying cause.

Statisticians work out the number of ‘excess deaths’ by calculating the five-year average — the number of deaths recorded in the same week over the previous five years.

Only two regions of England had their total deaths registered below the five-year average over the latest week.

In Yorkshire and the Humber there were 15 fewer deaths than expected, at 1,100, while the North East recorded two fewer victims than average, at 581.

Covid deaths fell in all regions of England this week, and the South East was the only area to record at least 300 fatalities.

For comparison, five regions — North West, West Midlands, East of England, London and the South East — had deaths above that benchmark the week before.

In Wales, the number of deaths from all causes was also below the five-year average for the first time this year. 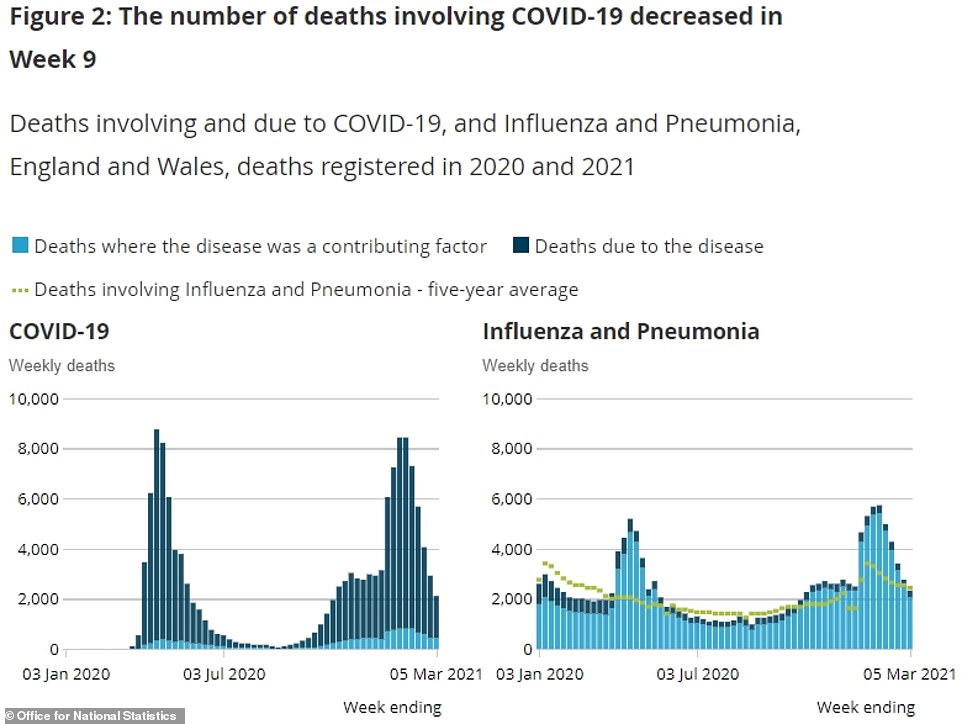 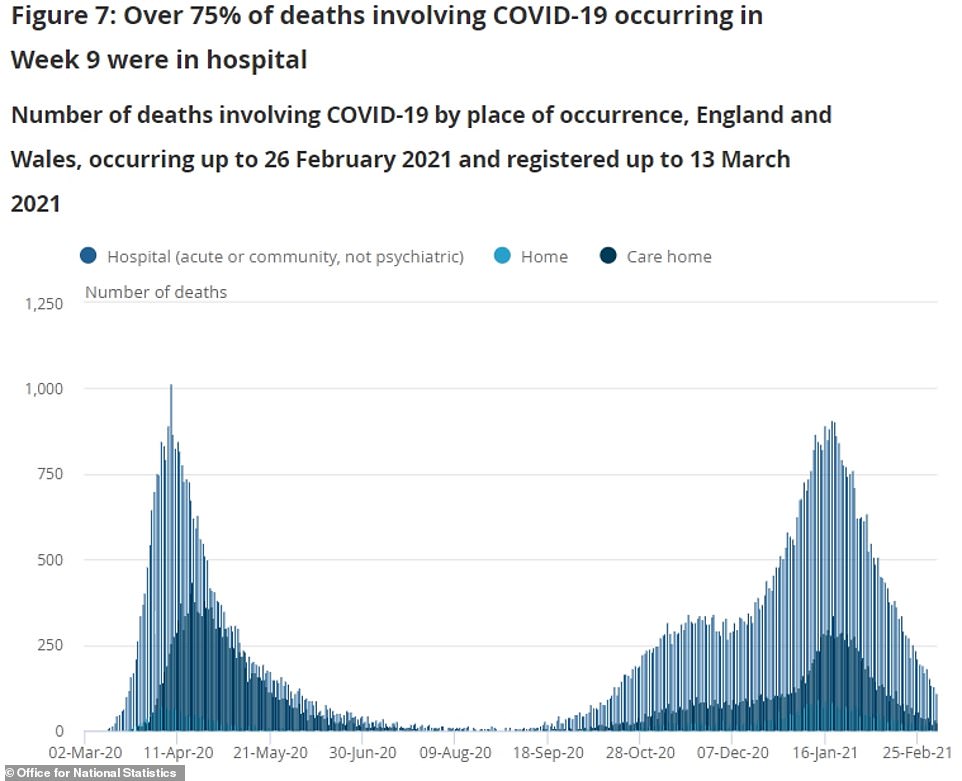 The majority of deaths due to Covid in the most recent week occurred in hospital, ONS figures showed today 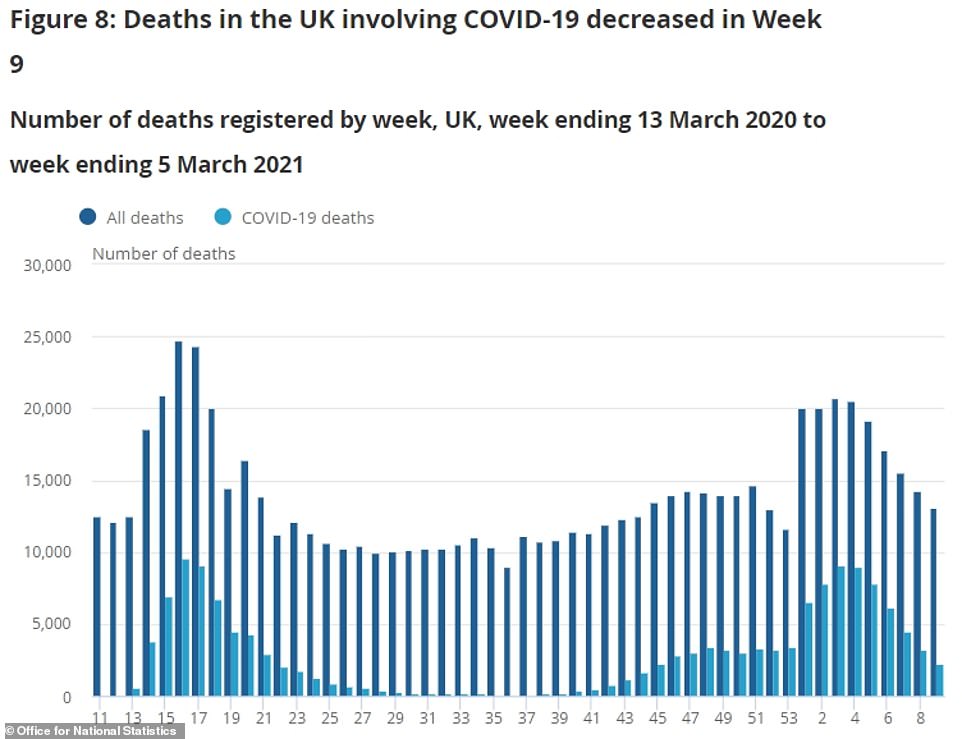 Deaths involving Covid decreased in every region of England in the week to March 5, the latest available 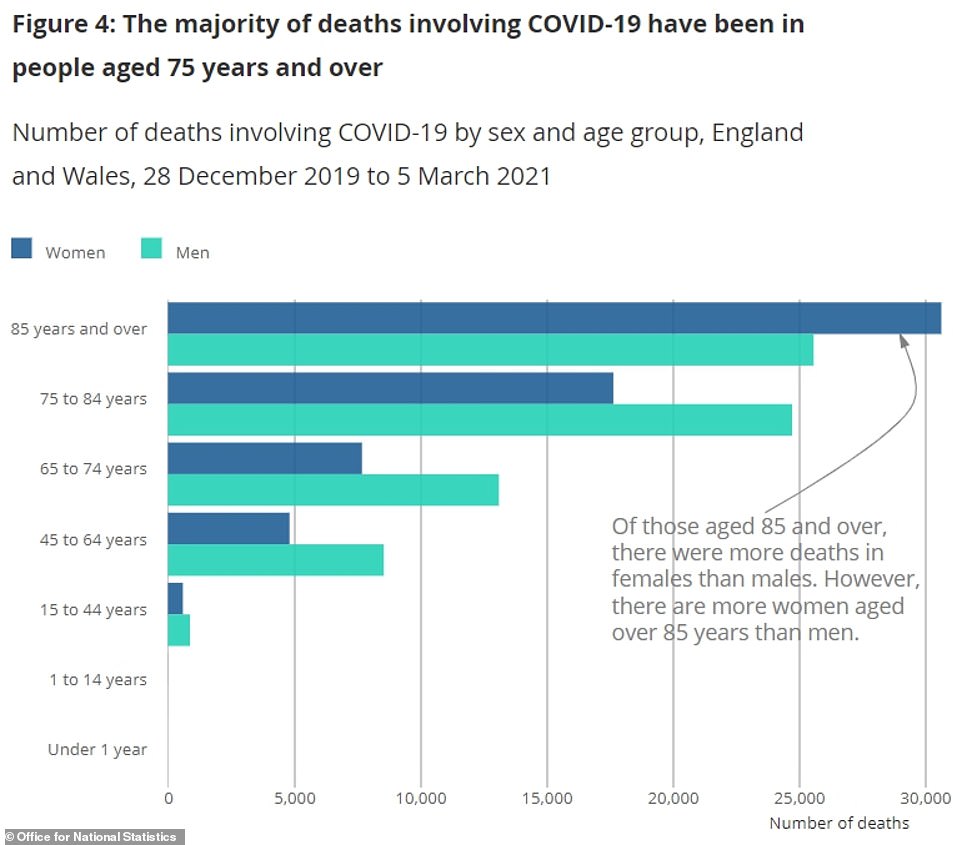 Official data shows that those aged 85 and over have been disproportionately affected by the virus, and were more likely to die if they became infected with the disease than those in younger age groups