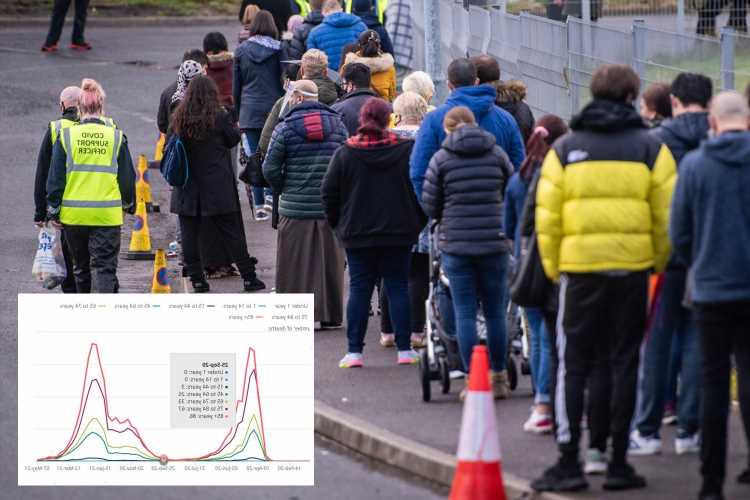 DEATHS caused by Covid-19 have dropped by at least 98 per cent in the over 60s, new data has revealed.

Lockdown restrictions and the vaccine rollout have helped drive down infections and hospitalisations and ministers have urged Brits to continue to get their jabs to fight new variants. 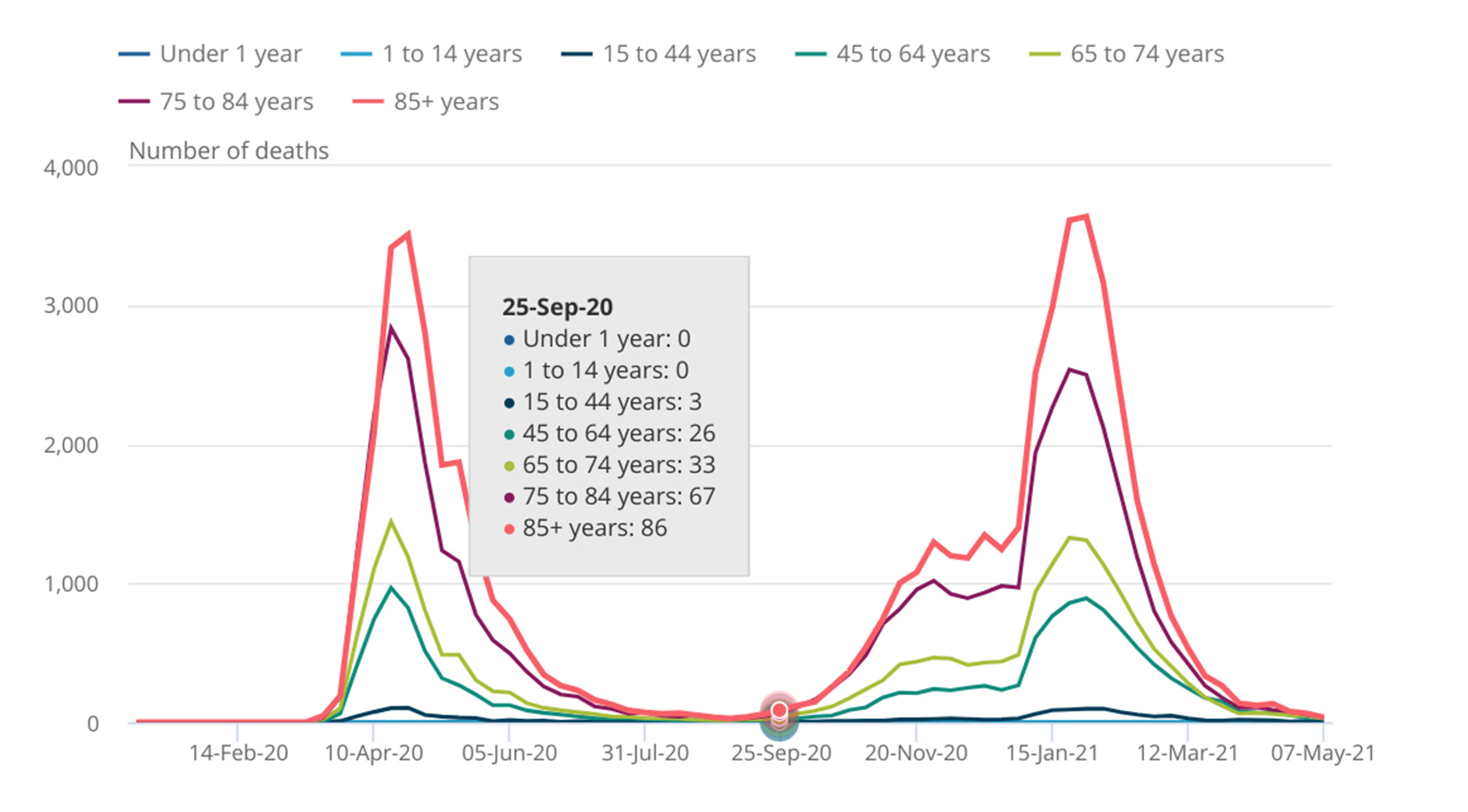 Data from the Office for National Statistics (ONS) today revealed that deaths involving Covid-19 in England and Wales have fallen 99 per cent from the peak of the second wave of the virus in January.

Looking specifically at different age groups and those in the age groups 75-79 and 80 and over have both recorded drops of 99 per cent.

A total of 125 deaths occurred in the week ending April 30 where Covid-19 was recorded on the death certificate.

This is down 99 per cent from 8,979 deaths in the week to January 22, the peak of the second wave, when more than a thousand deaths were taking place each day.

The jab rollout in the UK started on December 8 with the Pfizer/BioNTech jab.

In early January the Oxford/AstraZenenca jab was added to the rollout.

One expert today hailed the data from the ONS – but said it would not take into account deaths caused by the Indian variant. 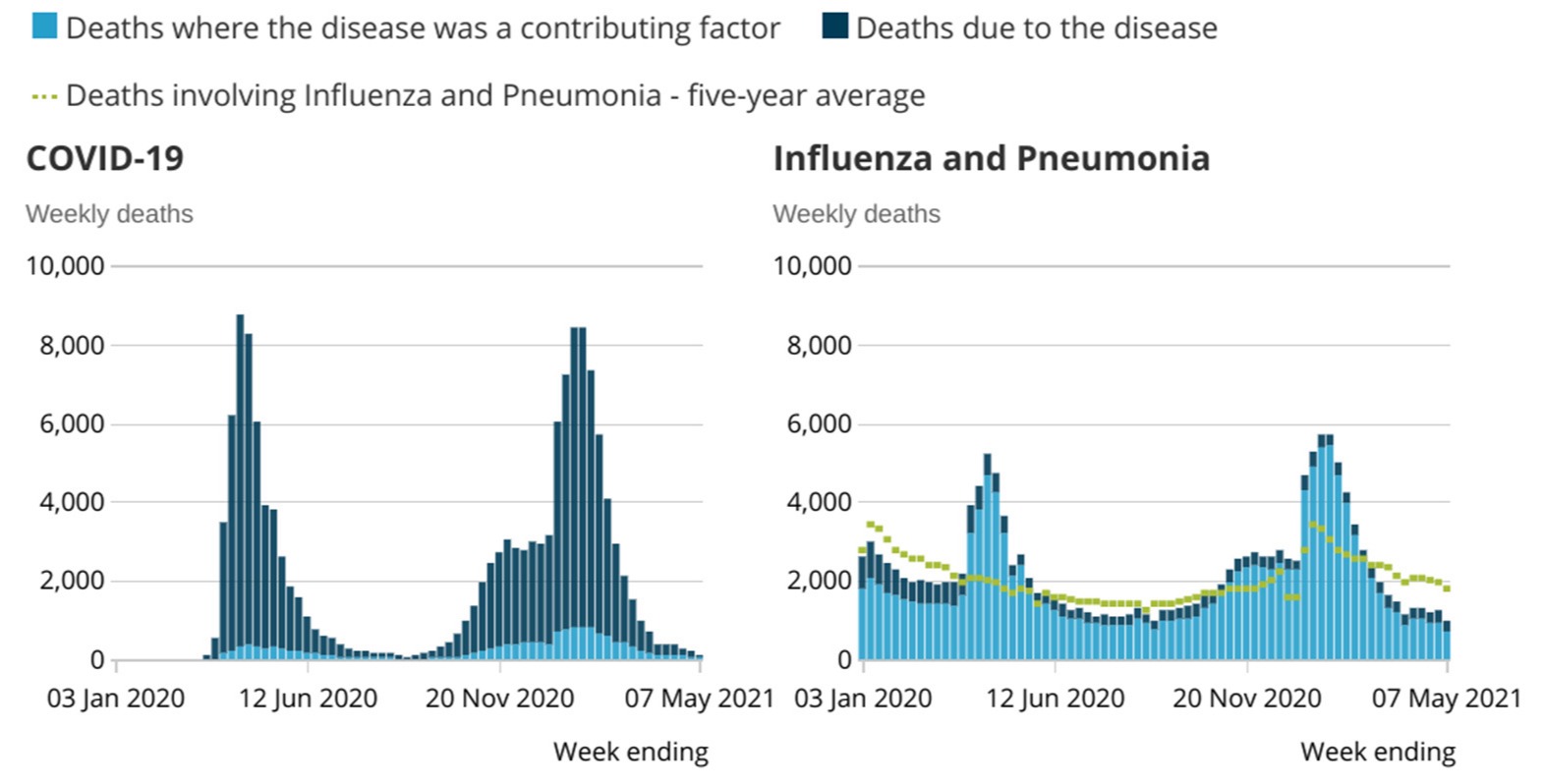 So far in the UK four deaths have been recorded from the Indian variant and surge testing has been rolled out in hotspot areas such as Bolton and Blackburn with Darwen.

People have been urged to continue to get their coronavirus vaccines – and sites in hotspot areas have extended opening hours in order to get people jabbed faster.

Prof Kevin McConway, Emeritus Professor of Applied Statistics, The Open University said the number of deaths have also fallen dramatically due to the bank holiday – as registration offices are closed.

He said: "In general terms, it continues the good news that we’ve seen for many weeks now.

"Registered deaths from all causes are down compared to the previous week overall, and separately in England, in Wales, in most of the English regions and in most age groups.

"Total registered deaths are below the average for the five years 2015-2019, as they have been every week since the middle of March."

He added that the most recent ONS released won't be able to tell us the impact the Indian variant is having on deaths.

Seperate data from the NHS however states that the number of patients in hospital in England with Covid-19 has dropped to its lowest level for eight months.

Speaking in the commons yesterday Matt Hancock said vaccines help prevent both deaths and hospitalisations from the virus.

Mr Hancock praised the people of Blackburn and Bolton after people were pictured lining up to get their jabs at the weekend.

One expert urged people to come forward for their jab as it will "help them in the coming weeks".

London regional director for Public Health England Professor Kevin Fenton said jabs will help build immunity and set out what needed to be done to control the spread of infection.

Speaking to BBC Radio 4's Today Programme he said: "In the immediate term we need to test, surge test, contact (trace) and support people to isolate. If we give them the vaccine now, it means that we build their resilience over the next two to three weeks."

He added that there are many reasons why people may not get a jab, and said that both testing and vaccination would be key as society opens up once more.

The data from the ONS comes after experts at University College London found that 96 per cent of Brits have antibodies after just one dose of either the Pfier/BioNTech or the Oxford AstraZeneca jab.

So far in the UK over 36.7 millions people have had a first dose of a jab, with 20.2 million having had a second.

This rose to 99 per cent after the second dose.