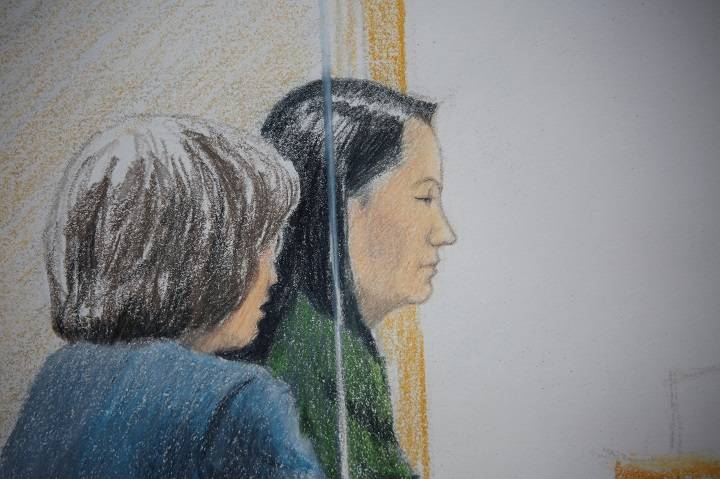 Newly released court documents from the bail hearing for Huawei CFO Meng Wanzhou offer a closer look at the executive’s connection to Vancouver and her possible coming legal defence.

Meng was arrested in Vancouver on Dec. 1 at the request of U.S. authorities, who want her extradited to face fraud charges related to alleged violations of sanctions against Iran.

She remains in custody in Vancouver pending the outcome of her bail hearing.

Global News combed through hundreds of pages of documents released this weekend, including affidavits filed by both Meng and her husband Xiaozong Liu.

The affidavits reveal the couple owns two homes in Vancouver.

The filings reveal the mother of four seeks to live at the 28th Avenue home if granted bail, and say her husband, daughter and extended family would move to the city to live with her. They also offer the homes’ equity as collateral against bail.

The documents also speak to Meng and her family’s 15-year connection to Vancouver.

The documents reveal two of her children attended school in the city between 2009 and 2012 while her husband completed a master’s degree there.

“Even after the children stopped attending school in Vancouver, my husband and younger children spent many weeks, sometimes months, here during the summer,” states Meng’s affidavit.

“Since approximately 2010, my in-laws typically stay at our home in Vancouver for multiple months in the summer … I always try to spend at least 2-3 weeks in Vancouver every summer.”

While Meng’s case has not even completed its bail hearing phase, never mind extradition proceedings, the court filings hint at Meng and Huawei’s legal strategy ahead of a potential U.S. court case.

The submission summarizes the U.S. goverment’s case as alleging that Huawei “effectively ‘controlled’ an entity called Skycom” until about 2014, and that it had operated in violation of sanctions against Iran at some point between 2007 and 2013, while defrauding U.S. banks by misrepresenting its relationship with the smaller company.

The submission highlights a specific date upon which fraud is alleged to have occurred, Sept. 3, 2013, in which Meng gave a PowerPoint presentation to an unnamed financial institution.

In it, Meng is alleged to have misrepresented Huawei’s ownership and control of Skycom and its compliance with U.S. laws.

The slide in question refers to the fact that Huawei was once a shareholder in Skycom, and that Meng sat on the company’s board “to ensure trade compliance.”

It is alleged that “because the applicant used the word “I” in the presentation, she must have had personal knowledge of the factual accuracy of her statements,” states the document.

“As a review of the document itself reveals, the presentation from which the U.S. authorities select excerpts indeed emphasizes Huawei’s extensive compliance programs and its efforts to comply with the complex and dynamic applicable legal regimes in the many counties it operates.”

The submission further argues that even if Huawei was in violation of sanctions — which it does not concede — there is no evidence Meng was aware of it.

“The case against the Applicant seems to rest wholly on her reliance on a PowerPoint presentation prepared by others,” it states.

Meng’s bail submission refers to a report from KPMG in Huawei’s 2017 Annual Report which details the company’s “enterprise-wide commitment to compliance,” and which “lists the company’s related parties and major subsidiaries, and that list includes neither Skycom nor the entity that purchased it.”

Harrison’s affidavit also details a series of interactions between Huawei and the U.S. Department of Commerce, Bureau of Industry and Security, Office of Export Enforcement (OEE) between 2013 and 2016.

Harrison submits that in 2014 the OEE found no violations, that in 2016 Huawei confirmed to the OEE that it had been meeting annually with U.S. government officials between 2009 and 2014 to discuss sanctions compliance efforts, and that in 2010 and 2014 it retained U.S.-based auditors to ensure that compliance.

Harrison’s submission also argues that there have been no lawsuits filed against Huawei by any of the financial institutions it is alleged to have defrauded or indictments against the company itself by U.S. governments.

Meng’s bail proceedings are set to resume on Monday in B.C. Supreme Court in Vancouver.

Meng’s defence has submitted that she does not pose a flight risk, owing in large part to her connection to the city, along with a moral obligation to see the case through that is laid out in her affidavit.

“My father founded Huawei and I would never do anything that would cause the company reputational damage,” the document reads.

“I believe that breaching my bail conditions would cause such damage.”

Crown prosecutors dispute that position, arguing that Meng has no meaningful connection to the jurisdiction, virtually inexhaustible resources and is a citizen of a country with no extradition treaty with Canada and the U.S.