Our £725,000 dream home became a ‘NIGHTMARE’: Retired couple are forced to demolish their five-bed new-build after just FIVE YEARS due to its dodgy foundations

A couple will have to demolish their £725,000 dream retirement home in Cambridgeshire just five years after it was built.

The five-bed house owned by Madeline and Alastair Price, aged 70 and 69, is so wonky they can’t physically open the front door.

The couple’s detached home, which they bought in 2018, is covered with metre-long cracks as swelling soil is ‘lifting up’ the house.

Insurers have blamed poorly-constructed foundations and ordered the house to be torn down and rebuilt as the damage is too severe to repair.

‘The cracks are pretty much everywhere. None of the floors or work surfaces are level.

‘Doors won’t shut – I can’t even open the front door because it’s stuck.’

‘The insurance company said they can’t save it. It’s not just a building, it’s our home.’ 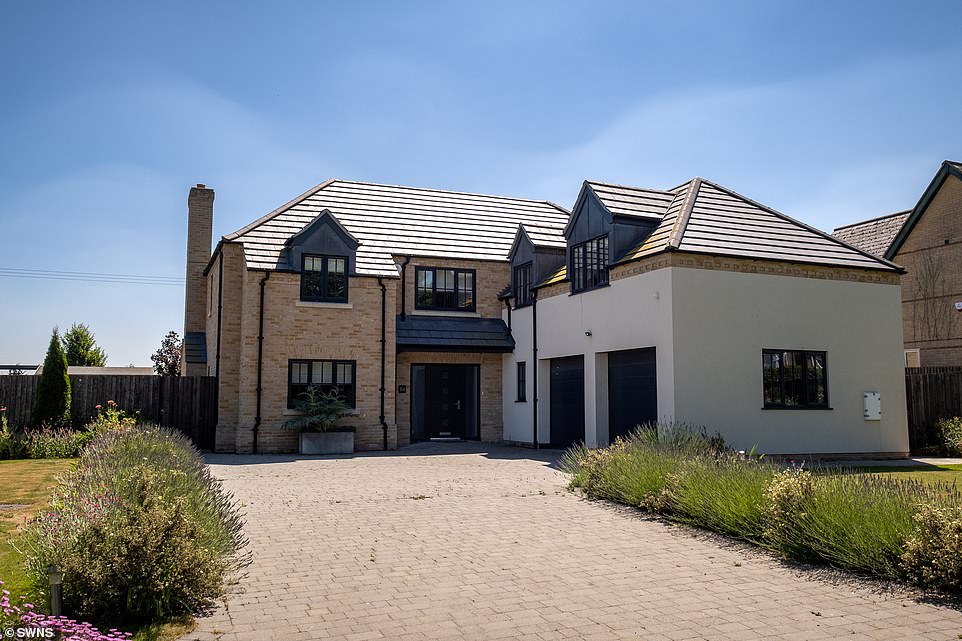 A house in the village of Wicken (pictured), near Ely, that was built only five years ago is to be demolished and rebuilt due to the inadequate foundations 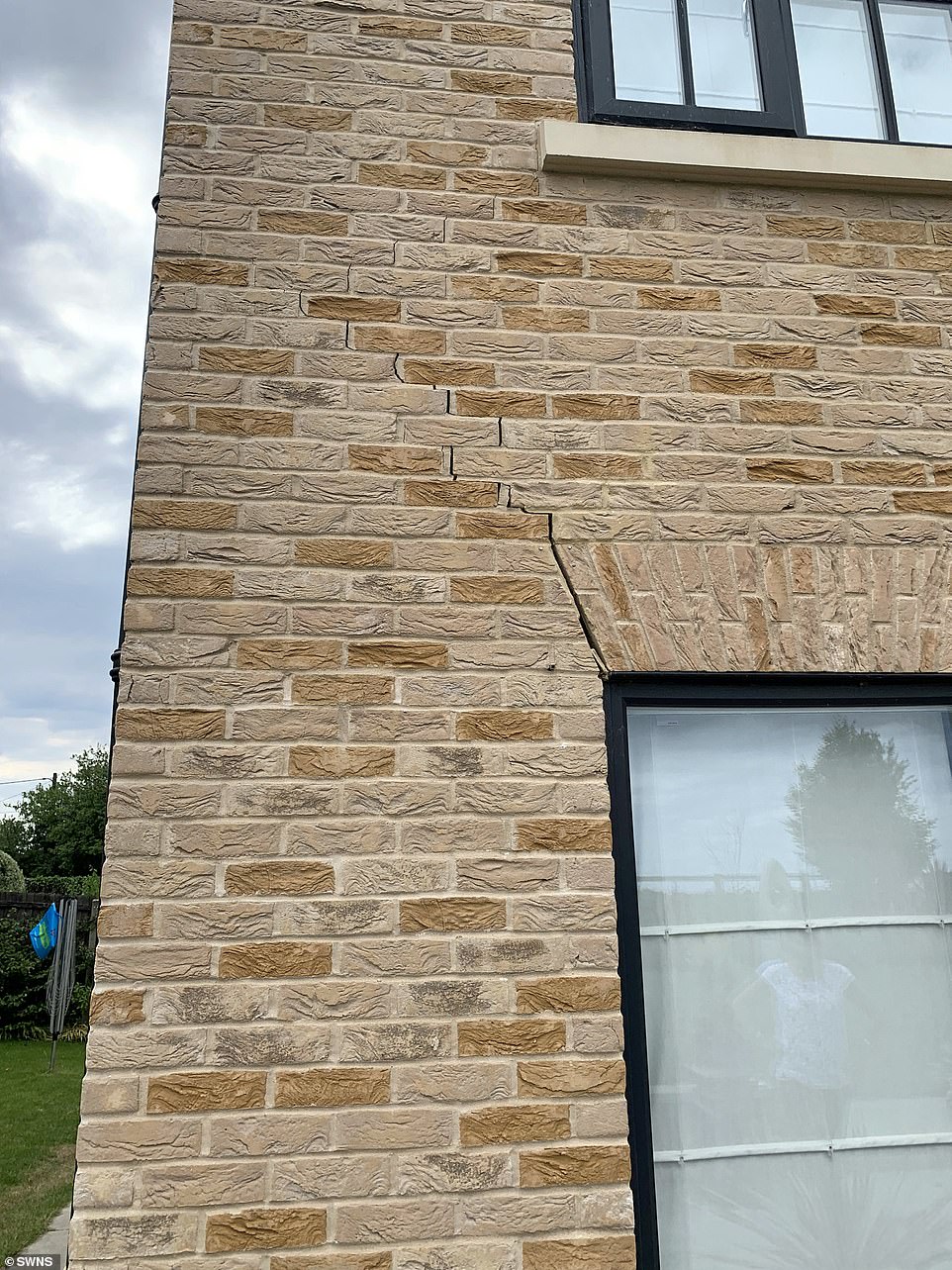 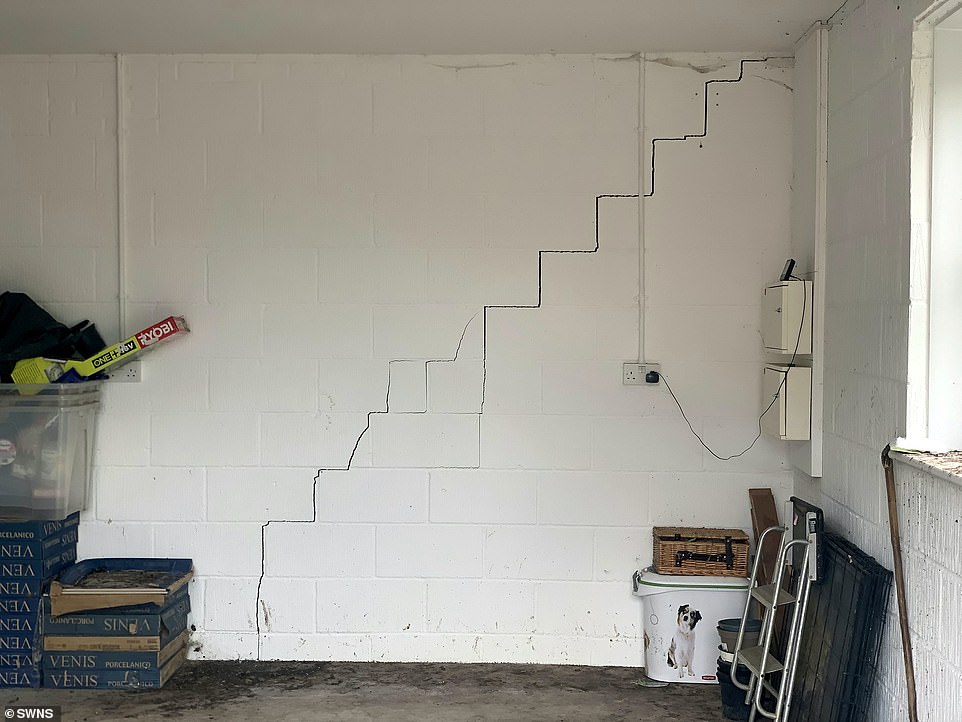 Inside the couple’s garage a huge crack stretching several metre can be seen. The cracks have been caused by soil underneath the house swelling up and moving the house’s foundations 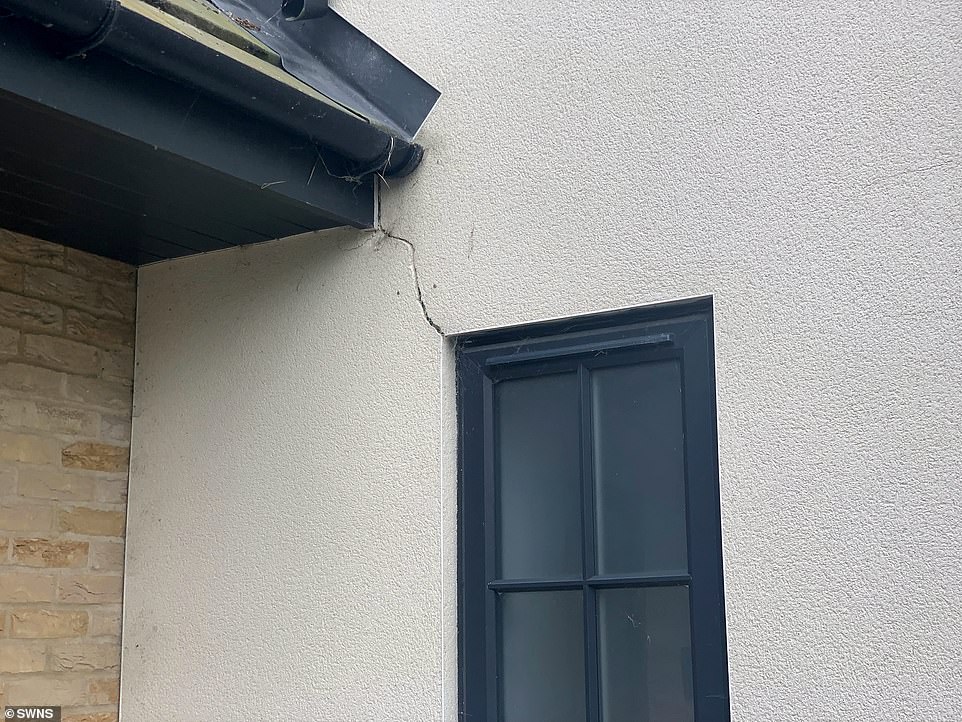 Situated in the rural village of Wicken, near the historic cathedral city of Ely, the couple’s home counts five bedrooms and three bathrooms.

Madeline showed how cracks punctuated her and husband Alastair’s home, which has underfloor heating, a wine chiller and a wood burner.

The couple’s double garage has a two-metre-long crack inside that is around half an inch wide, while the kitchen and sitting room are also affected.

Madeline said the issue was with the house’s foundations – around 1.5 to 2-metres deep – being moved by the clay soil below, which is expanding due to ground heave.

Ground heave is associated with the swelling of clay soils that expand when wet.

The couple claim that builders should have accounted for this when building the home, which came with a 10-year guarantee under the Local Authority Building Control. 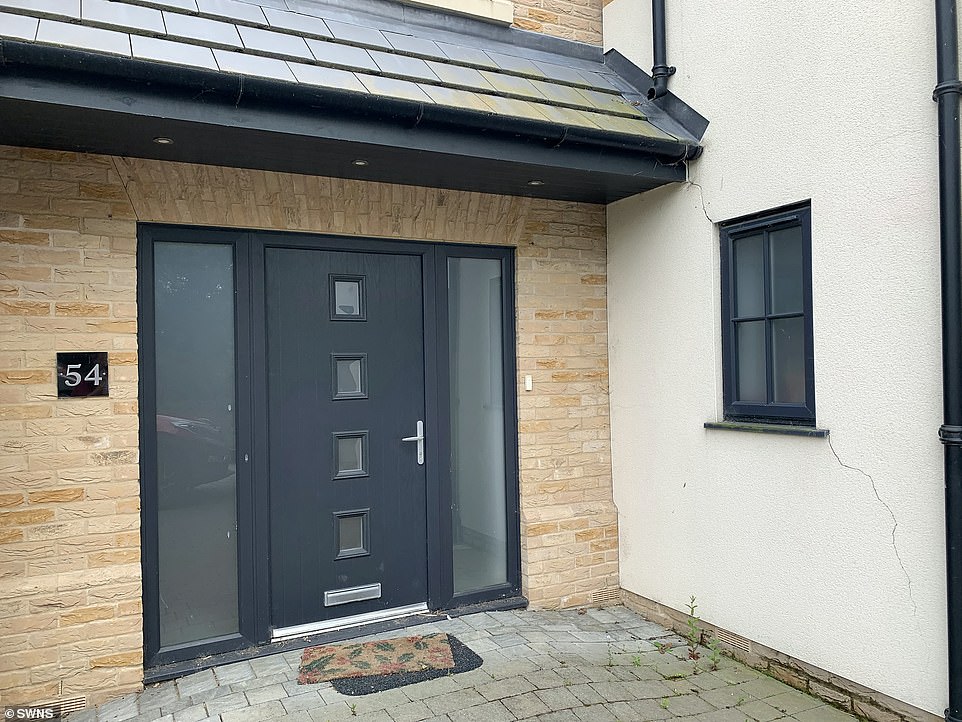 The couple say they are unable to use the front door, be cause the house is now so wonky it is physically jammed shut 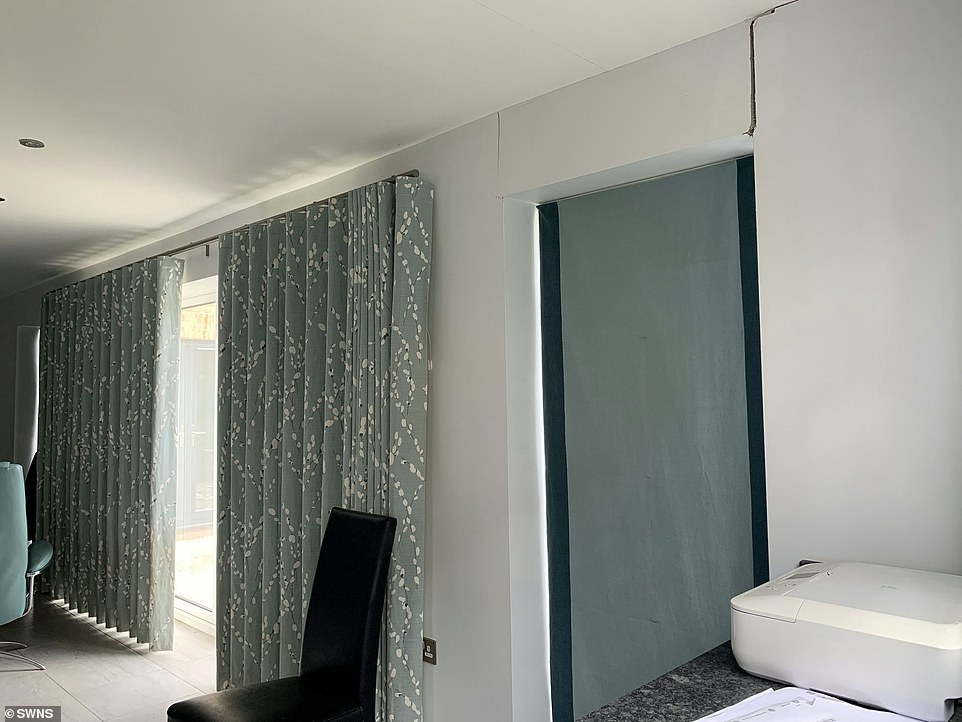 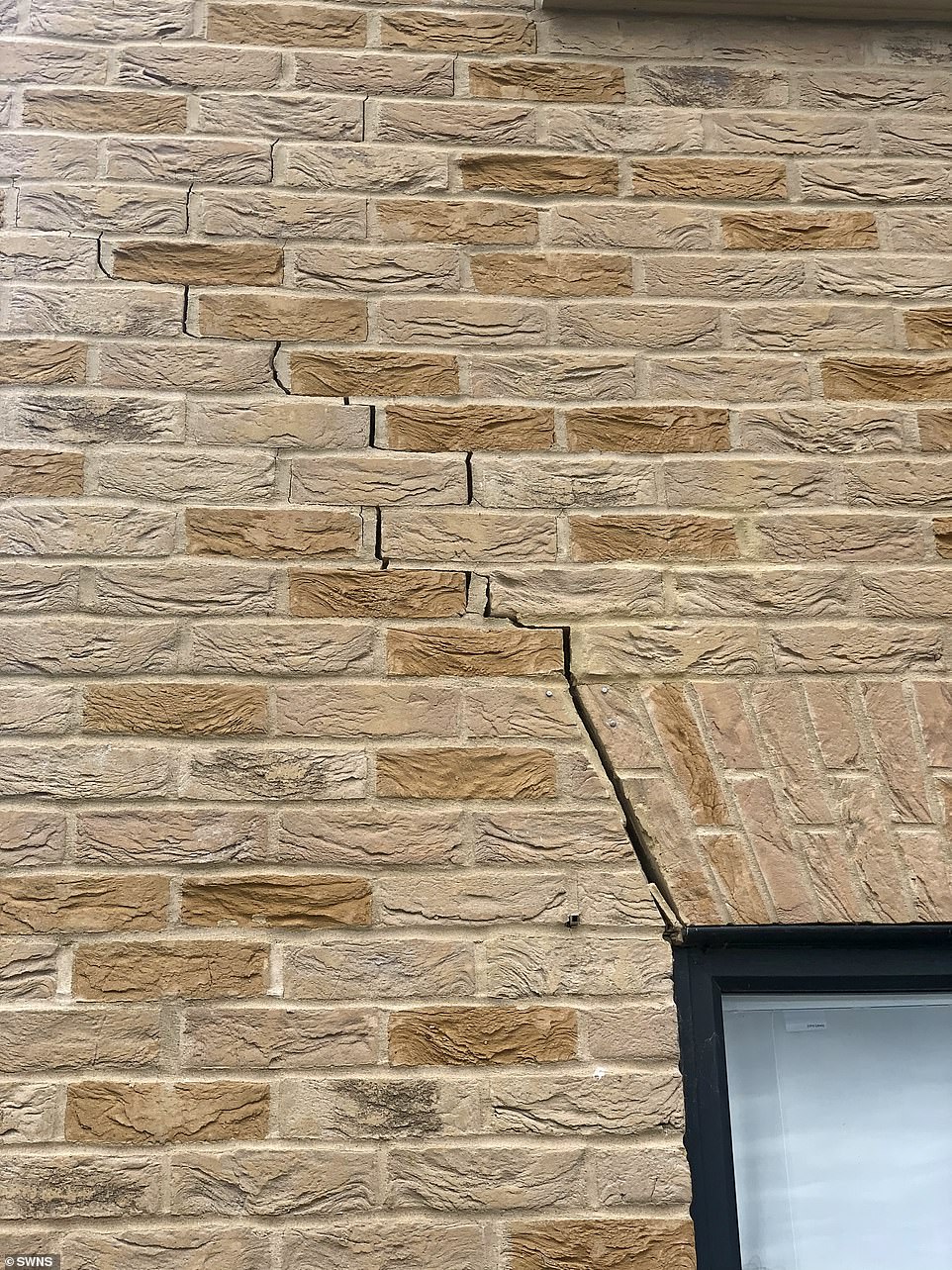 Madeline said: ‘The soil is bone dry with evidence that tiny tree roots are still there. It’s lifting the house up.

‘They should have known what the land was like when building the house.

‘We first noticed little cracks after a couple of years but we put it down to normal new house stuff.

‘It started in the hallway, on the staircase and in the back bedroom.

‘A structural engineer visited and said it was clay heave, which is where the soil has expanded beneath the house.’

Madeline and Alastair, also a retired banker, must move out of the house that they share with their golden retriever when the demolition notice is given.

They will be given compensation to rent a property for six months – but say they don’t know if they’ll return their home or sell it off once it’s rebuilt.

Madeline said: ‘They’re going to demolish everything and do the foundations again.

‘It could be at least two years out of the house.

‘We wanted to live in the countryside, we thought this would be our home for a few years and then we would move onto our final home.

‘We don’t know at the moment if we’ll come back. We might just put it straight on the market when it’s rebuilt.’

Rage Against the Machine raise $475,000 for Reproduction Rights