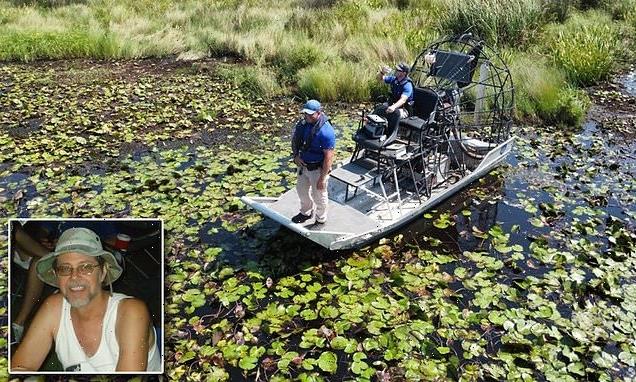 Cops hunting for an alligator suspected of killing a 71 year-old grandfather during Hurricane Ida have caught and killed one of the reptiles and found human remains inside it.

St Tammany Parish Sheriff’s Office in Slidell, Louisiana, announced Monday that they’d found the remains – believed to be those of Timothy Satterlee – inside a 12 foot long gator that weighed 504 pounds.

Tests are now underway to see if the body found inside the creature is that of Satterlee.

The gator was captured after three weeks of searches that began shortly after Satterlee was killed when Ida flooded the home he shared with his wife Sandy in the early hours of August 30.

Satterlee was attacked when he went out to check something in his shed, with Sandy saying she’d watched the creature rip her husband’s arm off, before using its ‘death roll’ to drown him underwater.

Detailing the hunt for the gator on its Facebook page, the sheriff’s office said: ‘St. Tammany Parish Sheriff’s deputies with the Special Operation Division, along with U. S. and Louisiana Wildlife and Fisheries agents, captured a 12 foot long alligator, weighing a startling 504 pounds in the area of Avery Estates.

‘It was near the location where Timothy Satterlee Sr. went missing on Monday, August 30, 2021, one day after Hurricane Ida hit South Louisiana, creating destruction across the region.

‘Sheriff Smith vowed from the beginning of the investigation into Satterlee’s disappearance that the agency would use all of the resources and manpower available to bring some sort of closure to the family.

‘For the last three weeks, members of the St. Tammany Parish Sheriff’s Office Special Operations Division, along with State and Federal partners, worked tirelessly searching the area in hopes of locating Satterlee, or the alligator that attacked him. This morning, their hard work paid off with the capture of the alligator that is suspected to be the one who attacked Satterlee.’

Explaining how the gator was captured, the statement added: ‘This past weekend U.S. Wildlife agents observed a large alligator in a waterway near where the incident occurred.

‘Deputies and agents, with the assistance of two Louisiana Department of Wildlife licensed nuisance hunters, Phillip Mc Clurke and Eric Dumas, set traps to catch the alligator. The alligator was caught this morning by one of the traps and brought to a secure sight to be searched.

‘Once the alligator was searched, it was discovered to have what appears to be human remains inside its stomach. Investigators will work with the St. Tammany Parish Coroner’s Office to verify those remains belong to Timothy Satterlee.’ 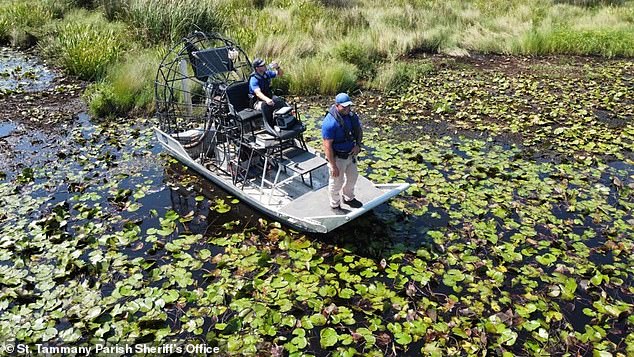 St Tammany Parish Sheriff’s Office are pictured hunting for the gator they believe killed grandpa Timothy Satterlee, with human remains found inside one of the creatures Monday 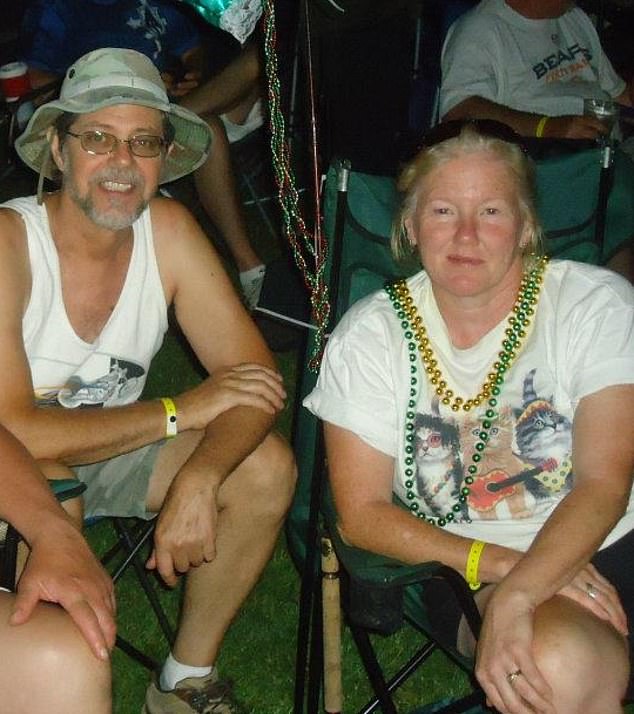 Timothy Satterlee, pictured with his wife Sandy, right. He is suspected to have been killed in an alligator attack in Slidell, Louisiana, after Hurricane Ida 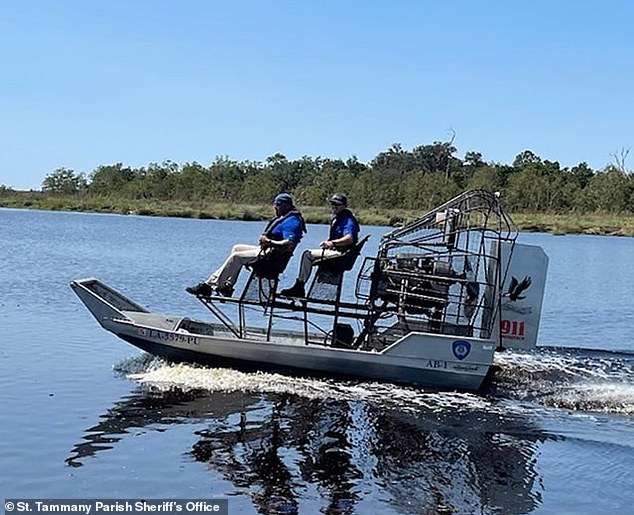 St. Tammany Parish Sheriff’s Office Special Operation Division deputies partnered with US and Louisiana Wildlife and Fisheries agents in their three week search for Satterlee’s remains and the alligator that attacked him. Searchers are pictured during the hunt

St. Tammany Parish Sheriff Smith shared his condolences with the family along with the announcement of the alligator’s capture. ‘This is a horrible tragedy and my sincere condolences and sympathy goes to the Satterlee family,’ he said in a statement.

‘I know todays findings does not bring their loved one back, but hopefully this can bring them some sort of closure. I am very proud of the hard, non-stop work, of my deputies and the other agencies who assisted, and I hope their persistence in finding this alligator will help the family with coping with their loss. We will continue to keep them in our prayers,’ Smith continued.

Search crews have been working to recover Satterlee’s body and capture the alligator that attacked him since he was reported missing after Hurricane Ida swept through Louisiana.

St. Tammany Parish sheriff’s Capt. Lance Vitter said at the beginning of the search, ‘There is a high probability that (Sattrerlee) is deceased, but we can’t make that call until we recover the body.’ 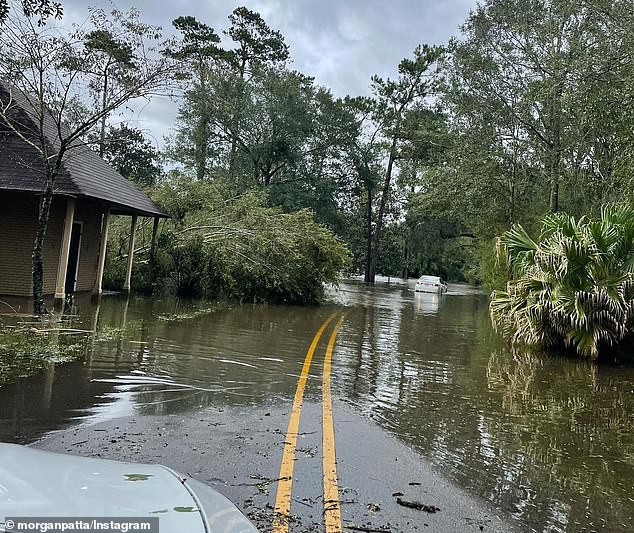 A flooded street is seen in Slidell, Louisiana, where Satterlee was attacked by a large alligator in the flood waters left behind by Hurricane Ida

Satterlee’s wife, who is in her 60s, heard splashing outside her home on August 30, after he walked outside to check something in the shed behind the house, according to police.

She walked outside the risen home on Avery Road thinking that her husband may have fallen in the water but to her horror she witnessed her husband being attacked by a large alligator inside the flooded shed, Nola.com reported.

The home is located near Lake Pontchartrain in the New Orleans suburb of Slidell, authorities said. Satterlee’s wife told deputies that she was able to pull her husband up a flight of stairs and ran to get help.

She told them that when she returned, the alligator had ripped her husband’s arm off as he laid unconscious. After seeing the extent of his injuries she got in a canoe and went for help trying to find cell service to call 911, according to police.

Deputies eventually arrived on the scene but Satterlee was no where to be found at the bloody scene, police reported. The gator is believed to have returned to finish Satterlee off.

Searchers spent six hours that day looking for the missing man to no avail.

WWL news reporter Erika Ferrando said she’d been told by locals that Satterlee was ‘a very kind and beloved father.’

According to Nola.com Satterlee was remembered for his volunteer work at his grandchildren’s high school, Pope John Paul II Roman Catholic High School, and the St. Margaret Mary disaster response team, which traveled to disaster sites to cook and serve meals.

‘He was a rare gem,’ his friend Erik Schneider told Nola.com. ‘You need a friend, you need a favor, call Mr. Tim. He’ll be there with whatever you need and whatever he can give.’ 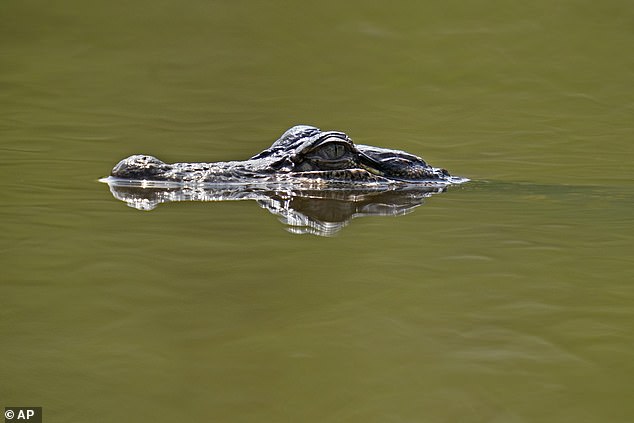 Neighbors told WWL alligators are common in the area and are known to approach people because some feed them. Jeb Linscombe, the alligator program manager for the state Department of Wildlife and Fisheries, told Nola.com that an estimated 2 million alligators live in Louisiana.

Alligators average between 7 to 8 feet in length meaning that the reptile that attacked Satterlee was ‘on the upper end of the size of alligators that live in the state,’ according to Linscombe.

Hurricane Ida hit the area the night before with 150mph winds becoming tied as the fifth-strongest hurricane ever to hit the mainland US. The storm caused widespread power outages and wrecked havoc on water systems, leaving 600,000 customers without running water.

At least 28 deaths were blamed on the storm in Louisiana, before the remnants of the weather system moved east, dumping record-breaking rain in a region that had not expected a serious blow and killing many more people from Maryland to New York.

The death toll continues to rise even weeks after the storm passed through the US.