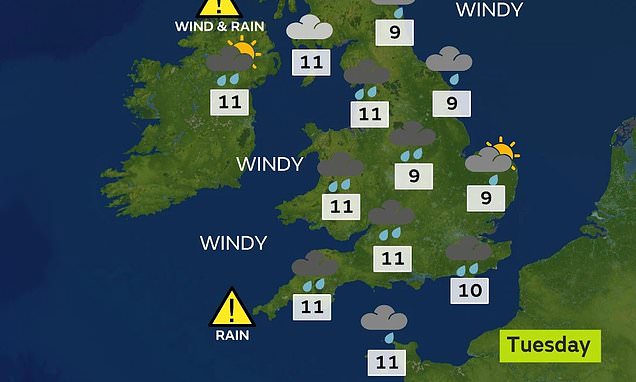 Commuters are being warned of potentially treacherous conditions on the roads this morning amid a series of weather warnings.

The Met Office is urging rush hour drivers to care care with heavy showers and strong winds expected to batter parts of the UK.

London and the south east, Northern Ireland, south west England and Wales have been issued with yellow weather warnings today, with heavy rain and gusts of up to 65mph expected, according to forecasters. 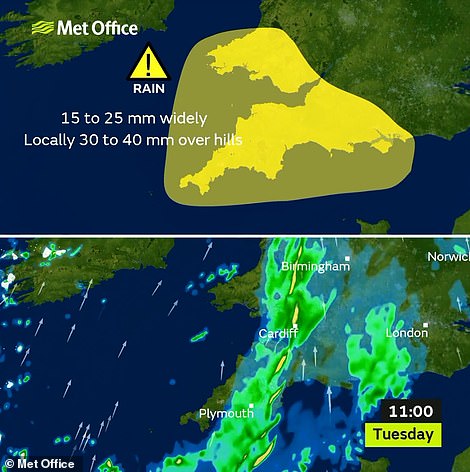 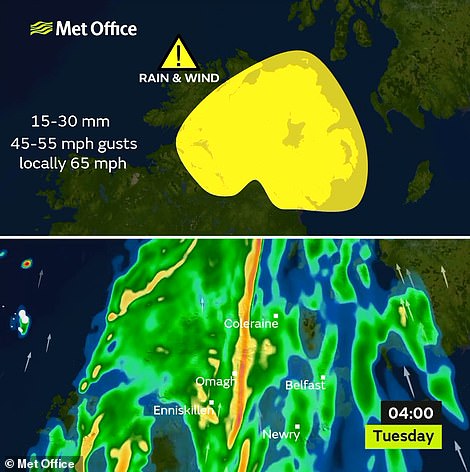 Met Office forecaster Helen Roberts told the London Evening Standard: ‘The ground is already saturated from previous rain, so it might not take long to exacerbate these problems.

‘We are only expecting between 15mm and 25mm, but the impact could come from the ground already being saturated.

What do the Met Office weather warnings say?

Today: 3am until 9am

Today: 5am until 9pm

‘There could be a lot of transport disruption, with lots of spray on the roads, so people will need to set aside extra time for their commutes. It’s going to be a grotty rush hour.’

Early this morning high-side vehicles, bikes and caravans were banned from the bridge, and the central lane was closed as the structure was being buffeted by the stormy weather.

And the winds lashing the sea into a cauldron are causing ‘severe delays’ for passengers and vehicles using the Torpoint Ferry running across the sea at the mouth of the Tamar estauary from Devonport at Plymouth to Torpoint, Cornwall.

Rush hour carnage also hit one of Britain’s busiest motorways this morning after crash forced the closure of a stretch of the M4 heading into London.

There was gridlock across a huge area of the Thames Valley as massive jams built up. People heading to work – along with many Christmas shoppers – desperately tried to find alternative routes.

Thames Valley Police said the entire 12-mile stretch of the eastbound carriageway between junction 13 at Chieveley, near Newbury, and junction 12 at Theale, near Reading, had been closed since 4.45am.

Officers said the crash was ‘serious’ and involved a motorcyclist. In the past, serious crashes on that stretch have seen police closed the M4 so an air ambulance can land on the carriageway.

It was causing chaos because traffic relies on the eastbound carriageway to travel from the West Country and the Thames Valley into London.

Traffic trapped on the closed-off stretch was allowed to turn back and leave the motorway at junction 13.

Drivers were advised to avoid the entire West Berkshire area if possible as it was becoming gridlocked as the peak rush hour started. A diversion was in place via the A34 towards Newbury and then the A4 to re-join the M4 at Theale.

The Met Office has given a yellow warning for rain along with cautions for potential flooding to homes and businesses.

Heavy rain is expected between 5am and 9pm across much of West, South and parts of Mid Wales, with strong winds and gusts of up to 65mph expected to affect the Welsh coast.

The rain warning for South Wales,  including Cardiff and Swansea, and Cornwall, Devon, Somerset, Dorset, Wiltshire, Gloucestershire, Hampshire, the Isle of Wight and West Sussex – is in effect until 9pm. 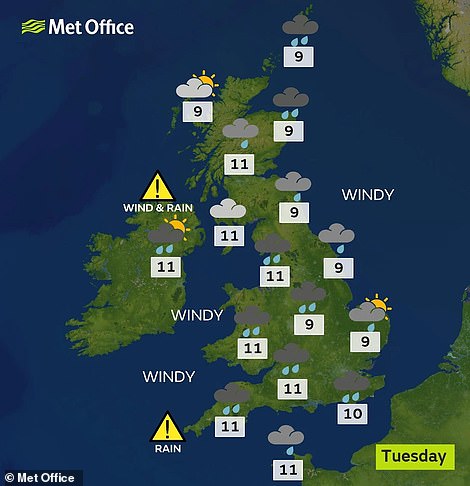 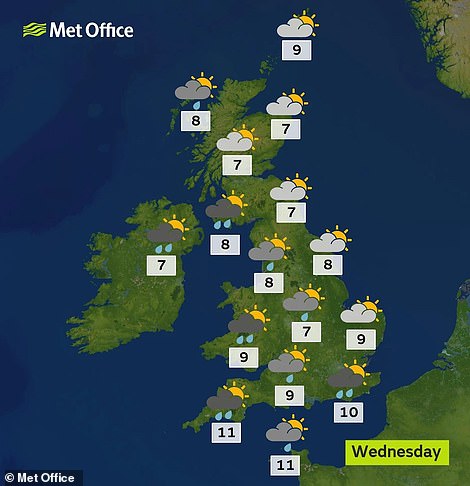 Heavy rain is expected between 5am and 9pm today (left), while Wednesday will also be wet for many areas (right) 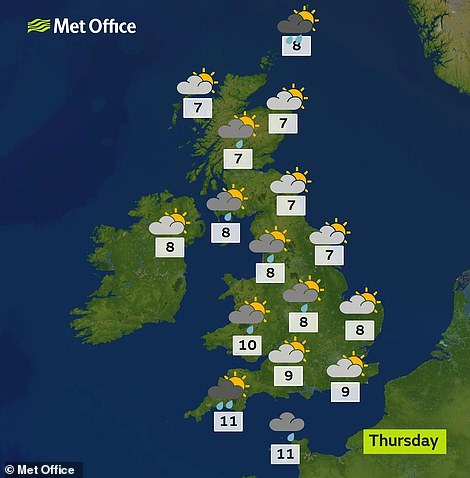 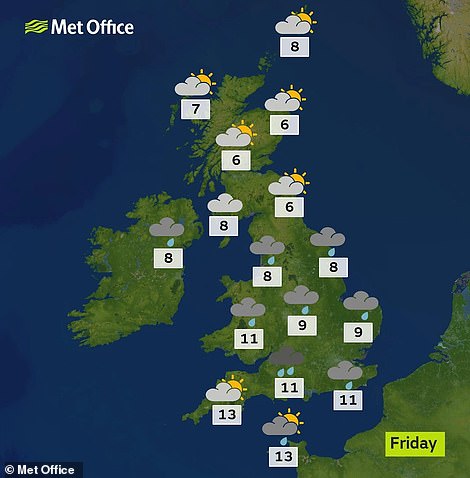 Thursday is expected to bring sunny conditions in eastern parts (left), while rain will return for many areas on Friday (right)

The worst of the weather is expected to have cleared by mid-afternoon but further east the worst conditions are likely to be during the afternoon and early evening.

The Met Office said: ‘Another spell of wet and windy weather is expected on Tuesday when rain will be heavy at times and, given recent wet weather, likely lead to impacts in a few places.

‘Over most of Wales, Devon and Cornwall the worst of the weather will have cleared by mid-afternoon whilst further east the worst conditions are likely to be during the afternoon and early evening.

‘This wet weather, meanwhile, will be accompanied by windy conditions with gusts in exposed coastal locations around 50-65mph which means that some coastal routes, sea fronts and coastal communities may be affected by spray and/or large waves. Inland, gusts will be lower and mainly peak at 40-50mph.’

Massive 16,000-tonne Russian cargo ship with 18 crew but no cargo onboard runs aground off Cornwall beach after strong winds batter south of England

A 16,000-tonne Russian cargo ship ran aground off a beach on the south coast of Britain this morning as the area was battered by winds of up to 74mph.

Emergency services launched a major operation after the Kuzma Minin became stranded off Gyllyngvase Beach in Falmouth in Cornwall.

Some 18 crew but no cargo were believed to be on board. The RNLI launched out of Falmouth just after 6am with pilot boats from the nearby docks also in the water. 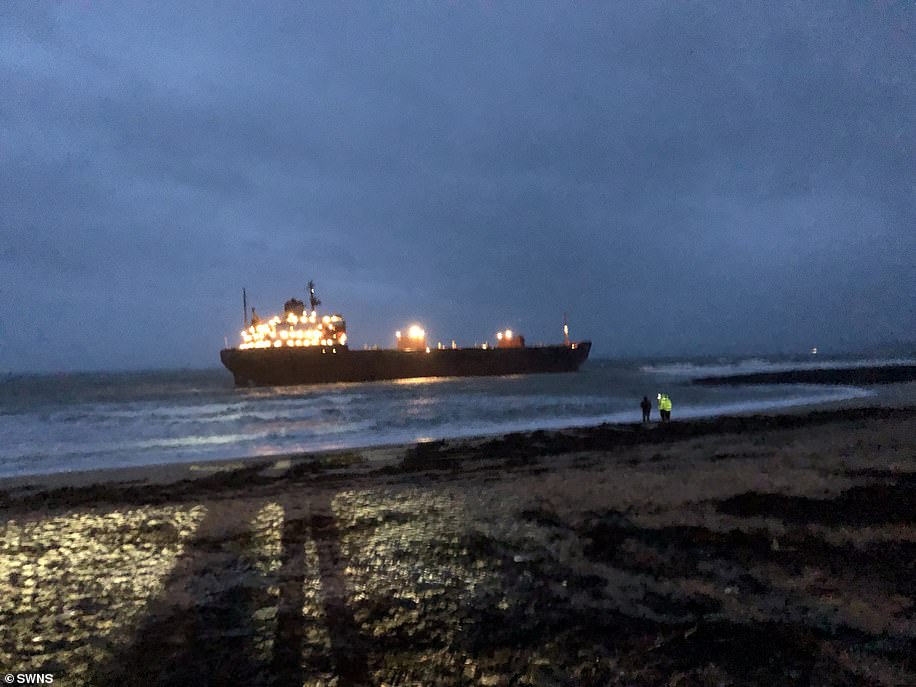 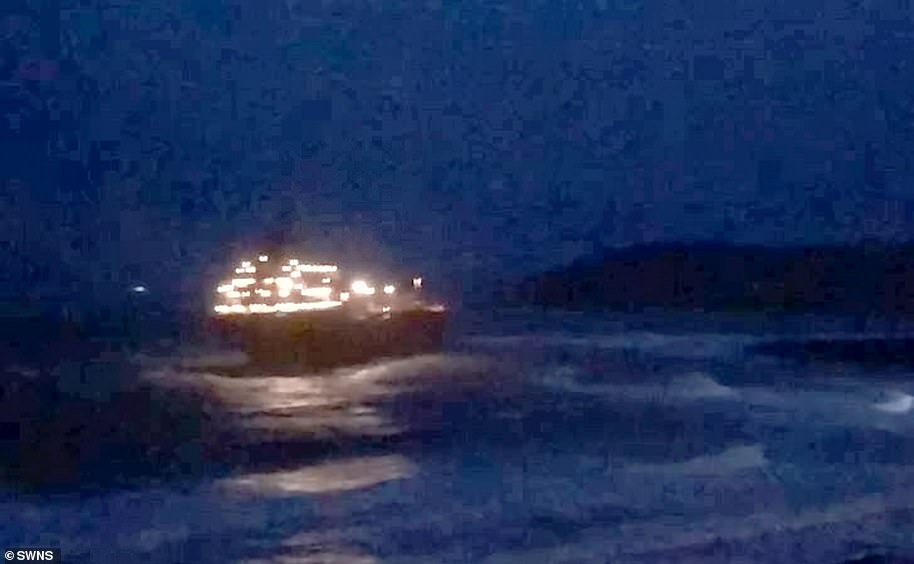 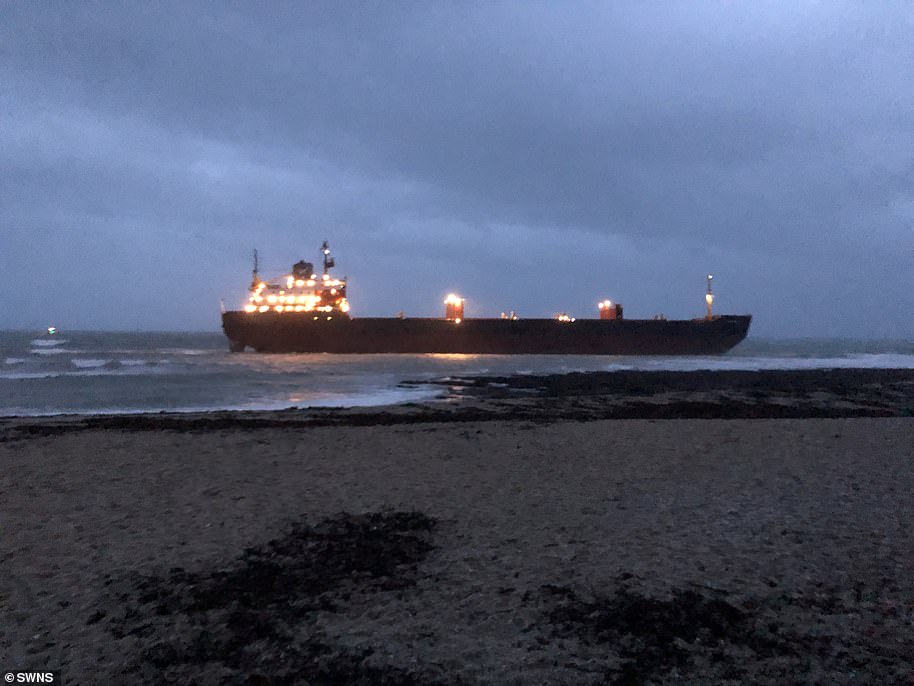 Witnesses have taken pictures of the boat close to the shore. It comes after the Met Office issued a yellow warning for severe weather with 65mph winds forecast.

Gales have already been recorded at up to 74mph in Cornwall and 40 knots on the River Tamar – disrupting traffic.

The Maritime and Coastguard Agency said the 590ft (180m) bulk carrier registered in Russia, built in 1980, had dragged its anchor and had a list of about five degrees.

Sean Stratton, who spotted the ship on the beach in Falmouth today, tweeted: ‘Russian ship wrecked on Gyllyngvase beach! She’s broadside onto the beach.

‘In my opinion Falmouth shipyard tugs won’t be powerful enough to pull her off the suction effect of sand. A salvage tug is needed but they no longer station one at Falmouth… I’m claiming wreckers’ rights!’ 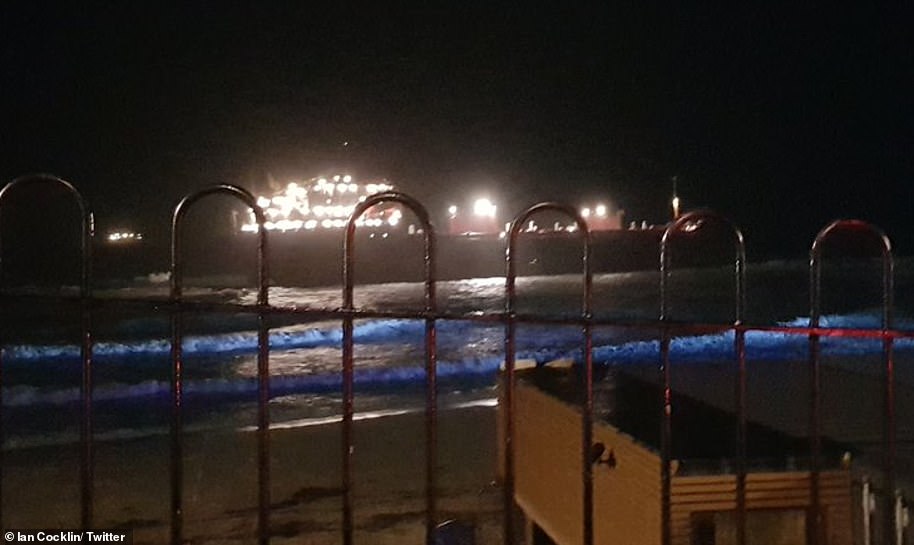 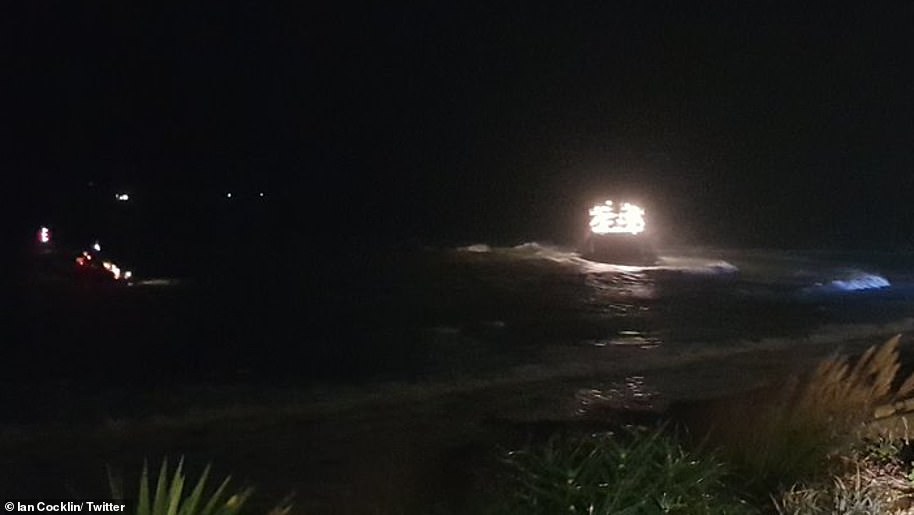 An HM Coastguard spokesman said: ‘HM Coastguard is currently co-cordinating assistance to a 180-metre bulk carrier which dragged her anchor and grounded on the western side of the port entrance between Swanpool and Gyllyngvase beaches at around 5.40am.

‘The vessel has 18 Russian crew on board. There is no cargo on board. She currently has a list of 5 degrees but there is no report of any pollution.

‘Tugs are on their way to the vessel and a lifeboat is standing by at the scene. The Falmouth Coastguard Rescue Team have cordoned off an area around the ship.

‘Tugs will be attached to the vessel and as the tide rises, the plan is to re-float the vessel.’

A Rich Stock for the Feast