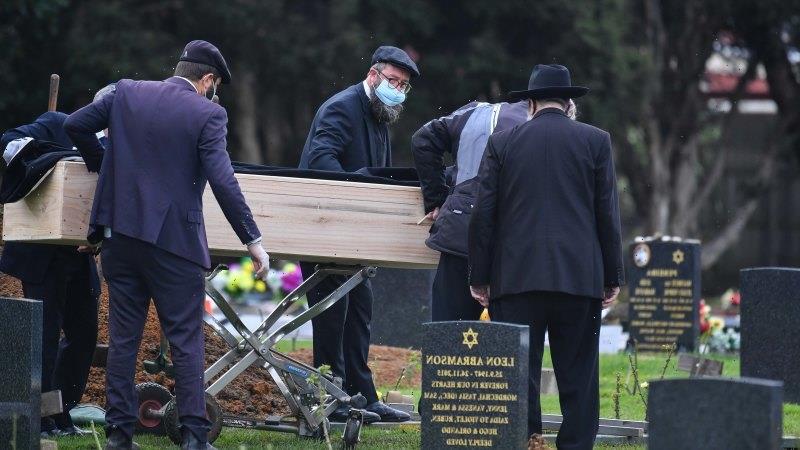 After a life lived in public, flamboyant businessman Geoffrey Edelsten’s death was marked with a subdued, small and simple funeral at a Melbourne cemetery on Wednesday morning.

Under grey skies, about 30 people gathered at the Springvale Cemetery in the city’s south-east for a traditional Jewish funeral for the 78-year-old, who was found dead in his apartment last week. Metropolitan Melbourne’s COVID-19 restrictions allow up to 50 people at funerals. 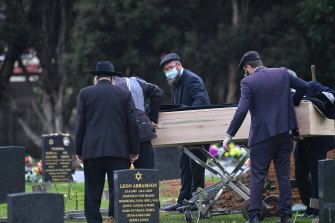 Friends and family of Geoffrey Edelsten at his funeral at the Springvale cemetery.Credit:Joe Armao

Close friends told the small group gathered that beyond the colourful headlines, controversy and extravagant lifestyle, Edelsten was a quietly spoken, humble and polite man.

The funeral director recited psalms and scripture to “create a heavenly escort which will take the soul of Geoffrey Edelsten to its final resting place”.

“If you just have in mind whatever positive idea and thoughts and memories you have of Geoffrey, his achievements and the relationship you had with him and we will all pray that bodes well for him on high,” he said.

The first speaker told those gathered he met Edelsten many years ago and was “always impressed with his dedication” and patience. They both lived in Carlton growing up, close to the football oval, which saw them develop a deep love of AFL. 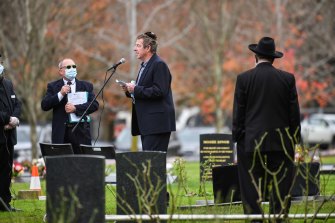 One of Geoffrey Edelsten’s close friends speaks at his funeral. Credit:Joe Armao

A school friend of 70 years said Edelsten was “one of a kind” and an enigma even to those who knew him. “The title Geoff gave to his autobiography, Enigma. If you look up [enigma] in the dictionary it says a person of puzzling or contradictory character and I think that sums it up.

“From reading the newspapers and watching TV, you know so much of the other parts of his life. Others can judge but I want to remember him as quietly spoken, polite, good company, loyal, intelligent, a good listener, respectful and above all a warm and engaging human being. Thereby lies the contradiction. Geoff rest in peace.”

He also read out a message from another friend and former colleague.

“His personal life has been aired in many shades of bright colours,” the message read.

“It dominated so much media and came with a spectacle of delectable wives … but traumatic to his family. He went after that exposure whilst living in extravagance.” 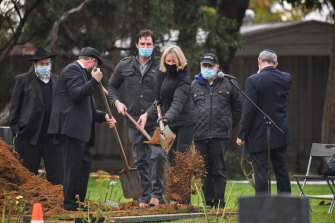 Attendees help to fill in the grave at the traditional Jewish ceremony.Credit:Joe Armao

However, while leading this lifestyle for 50 years, Edelsten remained “kind, courteous and generous”, the friend said.

“His story will survive him.”

Just before 11am, the simple, wooden coffin was lowered, and in Jewish tradition the funeral guests took turns to help fill in the grave.

“This is the last act of kindness we can do for him,” said the funeral director, before carrying out a final prayer.