Watson's new teammates who addressed media Wednesday at CrossCountry Mortgage Campus complimented the $230 million quarterback and steered clear of any conversation about the 22 active lawsuits he's facing from women accusing him of sexual misconduct during massage appointments.

None of the players would disclose whether Watson has broached the subject of the allegations since the Browns began their voluntary offseason workout program Tuesday with what coach Kevin Stefanski deemed “good” attendance.

“Obviously, we're going to keep that between us,” backup quarterback Jacoby Brissett said. “But, yeah, I'll leave it at that.”

Stefanski sidestepped the question, too.

“I'm not going to get into what guys are talking about necessarily,” Stefanski said. “I'll tell you [Watson] has done a nice job of being around the guys.”

Stefanski said he considers the offseason program valuable because it allows coaches to teach schemes and the team to bond.

NFL DRAFT: Packers, Chiefs, Eagles among 10 teams with most at stake

“Putting people around each other and starting to develop those relationships, it is really important,” Stefanksi said.

Watson has denied all wrongdoing, and two Texas grand juries declined last month to indict him on 10 criminal complaints.

“Obviously I’m getting to know him now that we’re on the same team. The relationship is growing,” Brissett said. “I wouldn’t say we’re best friends, but I can see why people gravitate to him. He seems like a really good kid, good dude.

“He’s very upbeat, a very joyful guy to be around, so I‘m excited to see where the relationship goes and obviously being on the same team and being able to compete and play alongside each other.”

In the case of cornerback Denzel Ward, he is giving Watson the benefit of doubt and placing all of his faith into Browns brass. Ward said he trusts general manager Andrew Berry and owners Jimmy and Dee Haslam along with the moves they have made.

“I feel [Berry] and those guys, they did their due diligence and they took care of the responsibility of looking into everything they needed to look into with Deshaun and everything that's going on,” Ward said. “So I mean, I trust those guys. I trust what they did.

“Meeting Deshaun, he seems like a nice guy, and he's obviously a great talent, and I’m looking forward to continuing to build our relationship on and off the field.”

Ward said Watson and All-Pro defensive end Myles Garrett are planning trips the players can take together this offseason to foster camaraderie.

But at some point, Watson's legal trouble may interfere with his plans. 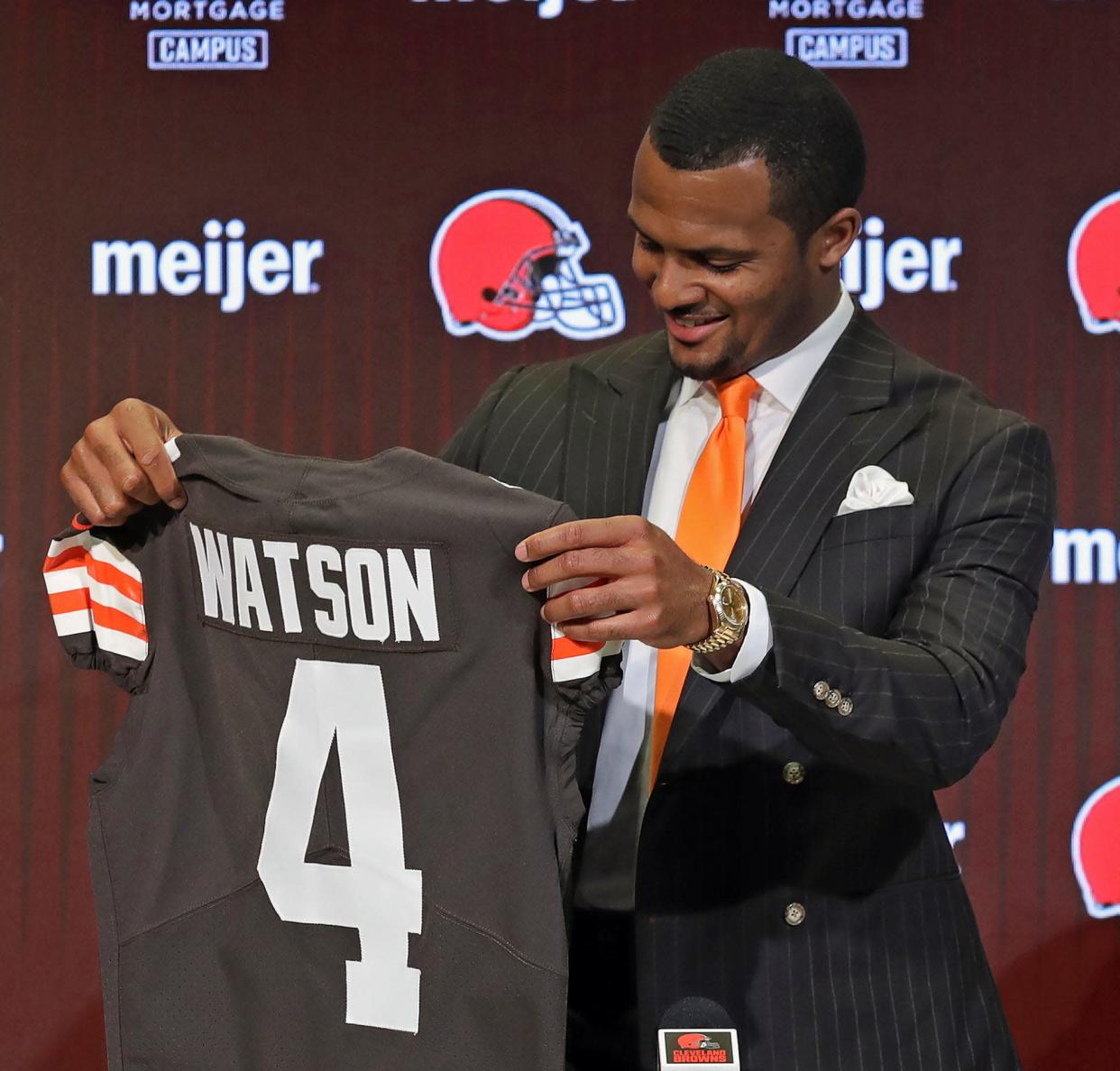 Attorneys for Watson and the plaintiffs reached an agreement last month to not schedule trials from Aug. 1 through March 1, 2023, ensuring hearings won't force him to miss football next season.

Yet Watson will likely receive an NFL suspension under the personal conduct policy, and he could miss parts of the offseason program due to court dates.

Stefanski said he had no answer for whether the Browns have gained a better understanding about when a decision on a suspension will be made. Last month at the owners meetings in Palm Beach, Florida, NFL Commissioner Roger Goodell said there was "no time frame" on a ruling.

As for Watson potentially missing a portion of the offseason program because of legal obligations, Stefanski said, “There are ongoing proceedings, and we'll make sure that we work through those.”

Has Stefanski encouraged Watson to address such matters with his fellow Browns players?

“I'm not going to get into specifics there, but I would tell you, with all of our new players, when you are first around your teammates, there is a process that you go through in getting to understand people, and you can’t do that all at once and have lunch with the entire team type of thing,” Stefanski said. “Over time, I think Deshaun, like all of our new players, understands that you have to spend time at it when you are talking about developing relationships.”

In the meantime, Browns players are thinking about football, even though they're not totally sure when Watson will be available to play.

Wide receiver Amari Cooper was vacationing in Dubai when he awoke to text messages informing him the Browns had traded for Watson on March 18.

Cooper said he didn't know Watson well because they had only met once or twice prior to this year. But Cooper is very familiar with the quarterback's abilities on the field and a resume highlighted by three Pro Bowls.

“Certainly,” Stefanski said, “I think he's being embraced by his teammates.”