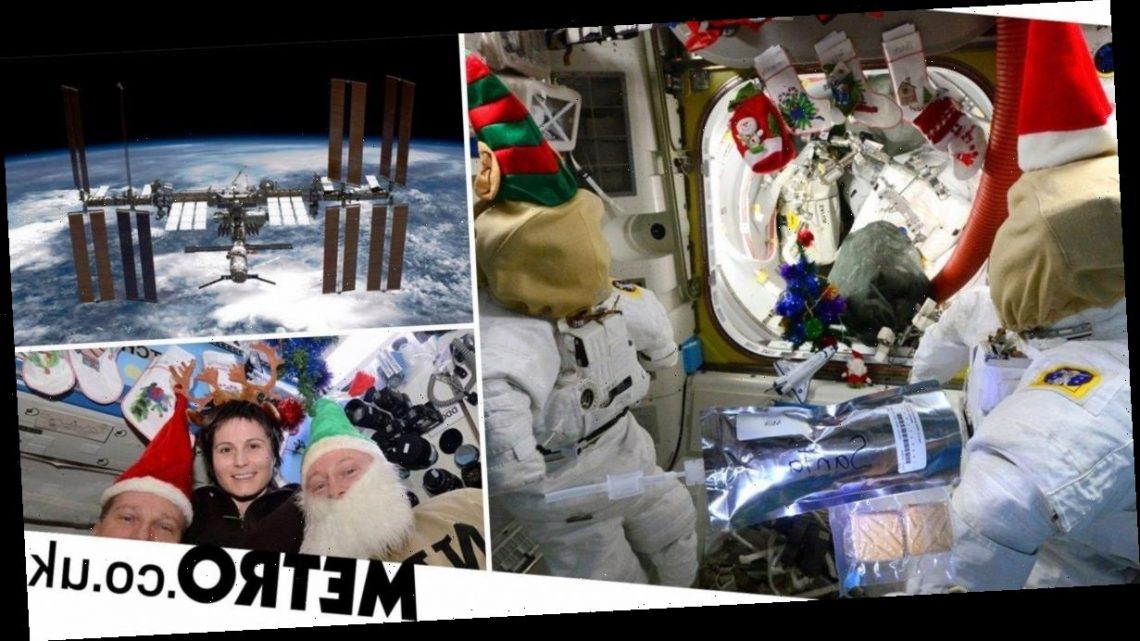 ‘Twas the night before Christmas on the International Space Station and Terry Virts had a flash of inspiration.

The former NASA astronaut decided the place could do with a few finishing touches, just in case Santa swung by while doing the rounds down on Earth.

He left some powdered milk and freeze dried cookies in the airlock, decked with stockings and two festive hat-clad space suits.

Christmas isn’t as big a deal in space as it is on Earth but in 2014 Terry and his fellow astronauts tried their best to spread some festive cheer.

He told Metro.co.uk: ‘It’s like going to Hawaii for Christmas or South Africa – somewhere exotic.

‘It was fun, I’m glad I spent one there – I wouldn’t want to spend every Christmas there.’

Among the gifts exchanged on the day was a harmonica given to him by Russian colleague Elena Serova.

Terry, who has lived in Texas for 20 years now, says working with cosmonauts from different parts of the world definitely had its advantages.

Because the Russian Orthodox faith celebrates the birth of Christ on January 7, the crew effectively got to enjoy two Christmases, he said.

And if the Americans were chatting on the phone for Thanksgiving, crew members from other parts of the world could take on extra work to cover them, leaving time for the NASA astronauts to speak to their loved ones down on Earth.

Terry said: ‘If there’s a space ship visiting or cargo ship or whatever, if work overrides it overrides. But they try to give you those days mostly off.’

The father-of-two recalled how he watched Russians listening to a live-stream of Christmas songs being performed in their home countries.

He had no idea what the lyrics were but he loved watching them sing along for what felt like hours.

There’s always something to do on the International Space Station, but Terry managed to speak to most of his loved ones at Christmas – even though he had to wait for a satellite to link-up to first.

And just because they’re in space, it doesn’t mean the astronauts aren’t craving a festive feast along with most of humankind below them.

For dinner on Christmas day in the ISS, Terry tucked into some ‘re-hydratable army-style turkey’ in a vacuum seal pack, along with trimmings like green beans, freeze dried stuffing and mashed potatoes.

He added: ‘It’s actually not bad, it’s not homemade, it’s much better down here on Earth.

‘Normally you just eat when you can. I would always try and take my food down to the Russian segment.

‘That was the highlight of my time in space, hanging out with the Russian guys, they were really fun.’

He said the first time he ever set his eyes on planet Earth from space was an unforgettable experience.

The astronaut explained: ‘For me it was a profound and emotional experience. Earth is over there and I’m not.

‘That was definitely a profound experience. It kind of struck me how beautiful the planet was.

‘The first view, it’s just overpowering, it was really hard to take my eyes off it. It was really distracting while I was flying the space shuttle.’

Terry used his keen eye to take stills and footage for the 2016 documentary Beautiful Planet, which shows what life was like in the International Space Station over a 15 month period.

One aspect of life in space that really sets apart the newbies from the veterans is getting used to being in a constant state of zero-gravity.

‘After maybe a couple of days it’s not bad and after a week or two you’re actually pretty good and maybe after a month you’re really good.’

He was worried he wouldn’t be able to sleep in such conditions but the ordeal of launching him into space meant he conked-out pretty easily when bed-time came around.

Of course, Terry missed his family knowing he’d be spending 200 days away from them, but he didn’t let it get him down.

He added: ‘I tried not to think of it as homesickness. My attitude the whole time was, I’ve got this time in space, I’m going to enjoy it. ‘

Got a story for Metro.co.uk?

Get in touch with our news team by emailing us at [email protected] For more stories like this, check our news page.