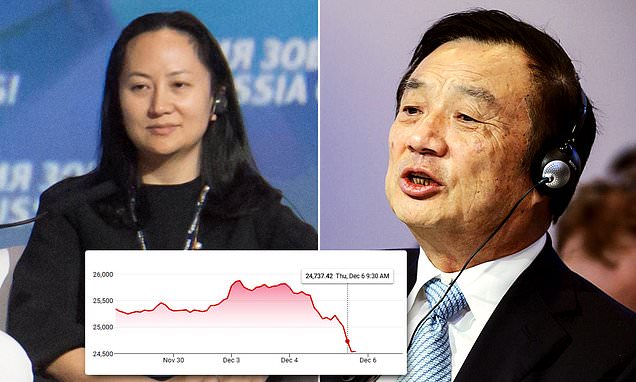 Stocks plummet and China demands release of telecom giant Huawei’s CFO (and founder’s daughter) after she was ARRESTED for ‘violating U.S. sanctions on Iran’ – as tensions between two countries soar

The arrest of a top executive of Chinese tech giant Huawei at the request of US authorities has caused markets to plunge worldwide as tensions between two countries soar.

Meng Wanzhou, who is Huawei’s chief financial officer and the daughter of the company’s billionaire founder, was detained while in transit this week in Vancouver, Canada.

News broke on Wednesday that the 46-year-old Meng faces extradition to the U.S. over alleged violations of American sanctions against Iran, sending the Dow Jones Industrial Average plunging more than 700 points on Thursday morning, before the index rebounded slightly in the afternoon.

Asian and European markets were also roiled, as the arrest threatens to derail a recent trade war truce between President Donald Trump and Chinese President Xi Jinping, potentially sending the world’s two largest economies back into a disruptive tariff battle. 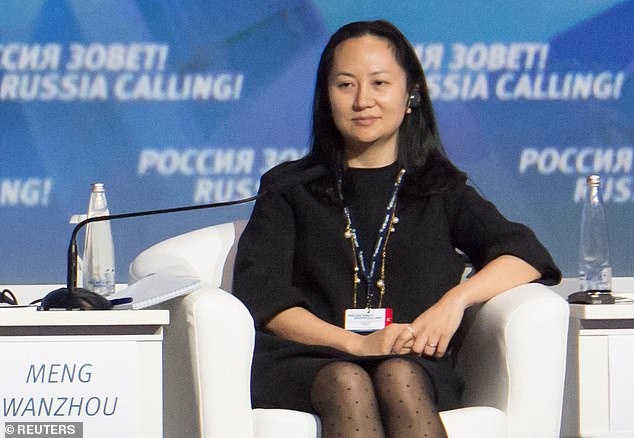 Huawei CFO Meng Wanzhou (above in 2014) was arrested Saturday in Vancouver, where she is facing extradition to the U.S. on suspicion that she violated U.S. sanctions against Iran

Meng’s arrest on Saturday came on the same day that Trump met with Xi on the sidelines of the G-20 summit in Argentina, a meeting that produced a 90-day ‘cease-fire’ in the trade war, with both powers pledging to put a freeze on any new tariffs as negotiations proceed.

Analysts say the case against Meng likely proceeded separately within the DOJ from Trump’s trade discussions, and it’s unclear whether he was even aware of the pending arrest when he met with Xi.

Canadian Prime Minister Justin Trudeau said that he himself did know in advance of the pending arrest, but that it was the decision of law enforcement authorities and there was no political interference.

While the surprise arrest could derail the trade negotiations, it may also provide Trump with a bargaining chip if he decides to intervene in the case, some experts say.

Others fear that China could retaliate in kind by taking ‘hostages’ from the ranks of American business travelers.

‘If I was an American tech executive, I wouldn’t travel to China this week,’ James Lewis, the director of technology policy at the Center for Strategic and International Studies, told Axios.

Lewis called Huawei ‘one of the Chinese government’s pet companies’ and speculated that the communist country’s leaders wouldn’t be afraid to ‘take hostages.’

U.S. authorities have reportedly been probing Huawei since at least 2016 for allegedly shipping U.S.-origin products to Iran and other countries in violation of U.S. export and sanctions laws. 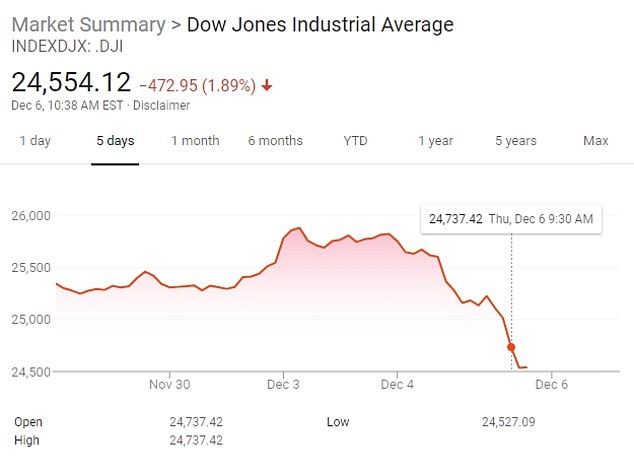 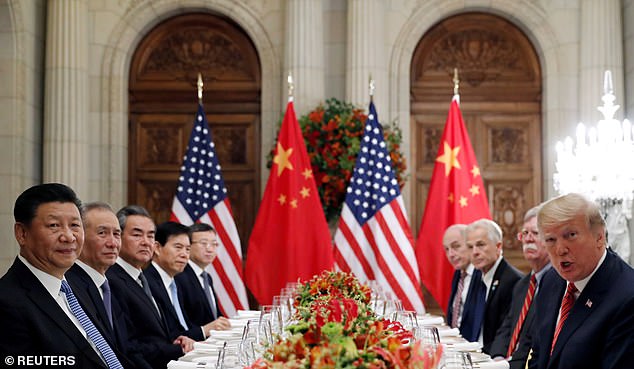 President Trump (far right) and President XI (far left) agreed to call a truce in their long-running trade dispute at the G20 on Saturday, the same day that Meng was arrested

Huawei is one of the world’s largest makers of smartphones and telecommunications network equipment, and has been labeled a national security threat by U.S. officials, who have urged allies who host American military bases to ban the use of Huawei products in their communications infrastructure.

The Chinese Embassy in Ottawa said Meng broke no U.S. or Canadian laws and demanded Canada ‘immediately correct the mistake’ and release her.

‘China has already made solemn representations to the United States and Canada, demanding they immediately correct their wrong behavior and restore Ms Meng Wanzhou’s freedom,’ the embassy said in a brief statement.

China’s foreign ministry also demanded Canada release Meng. Ministry spokesman Geng Shuang told reporters on Thursday that China was in contact with both Canada and the U.S over the case.

Geng also said Meng’s legal rights must be ensured. Neither Canada or the U.S. had so far responded to China’s concerns, he added.

The case adds to Beijing’s tensions with Washington and threatens to complicate trade talks taking place in the midst a cease-fire in a tariff war over China’s technology policy. 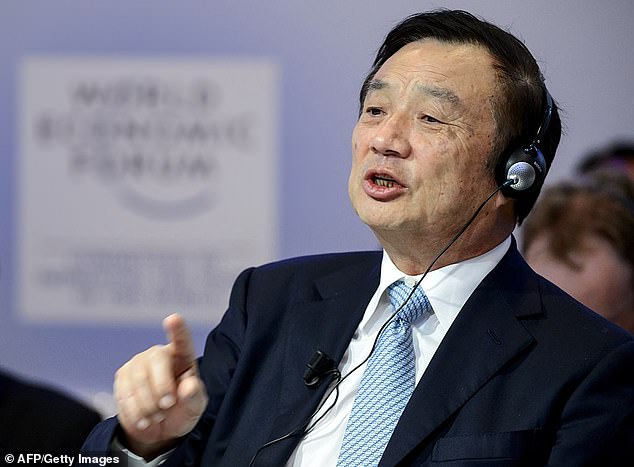 Meng, who is one of the vice chairs on the Chinese technology company’s board and the daughter of company founder Ren Zhengfei (above), was arrested on Dec. 1 and a court hearing has been set for Friday

Asian stock markets tumbled on the news, with the arrest is stoking fears that the world’s two biggest economies will not be able to reach a long-standing truce and promote global growth.

Markets across Europe also slumped and experts said investors were ‘knocked sideways’ by Meng’s arrest, and fear the Chinese will hit back by stepping up the tit for tat trade war with Washington. 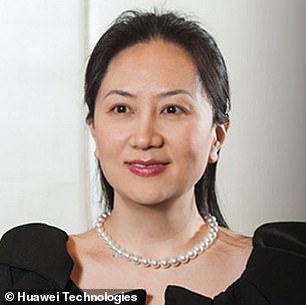 Markets in America had already been falling since Tuesday on fears of a U.S. economic slowdown.

Meng, one of the vice chairs on the Chinese technology company’s board and the daughter of company founder Ren Zhengfei, was arrested on December 1 and a court hearing has been set for Friday, a Canadian Justice Department spokesman said, according to the Globe and Mail.

The Canadian newspaper said a publication ban sought from the court by Meng prevented it from reporting further details.

Representatives of Huawei, one of the world’s largest makers of telecommunications network equipment, told The New York Times: ‘The company has been provided very little information regarding the charges and is not aware of any wrongdoing by Ms. Meng.’

Meanwhile, Britain’s BT Group said it was removing Huawei’s equipment from the core of its existing 3G and 4G mobile operations and would not use the Chinese company in central parts of the next network. 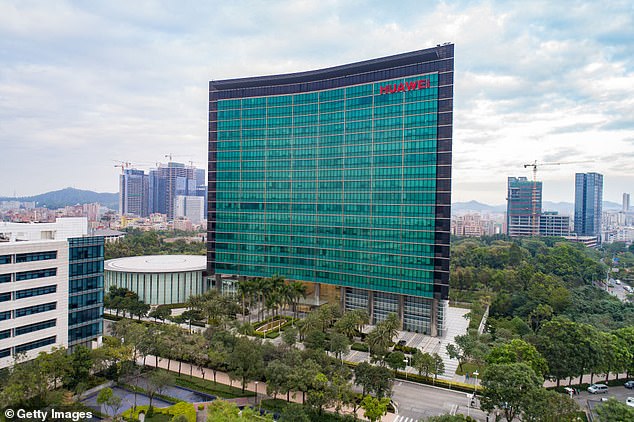 Huawei, which sells telecommunications and computer electronics equipment, is the world’s second largest maker of smartphones, behind South Korean giant Samsung. Huawei global headquarters is seen above in Shenzhen, China

New Zealand and Australia have already stopped telecom operators using Huawei’s equipment in new 5G networks because they are concerned about possible Chinese government involvement in their communications infrastructure.

Huawei, the world’s biggest network equipment maker ahead of Ericsson and Nokia, has said Beijing has no influence over its operations.

BT said Huawei’s equipment had not been used in the core of its fixed-line network, and it was removing it from the core of the mobile networks it acquired when it bought operator EE. 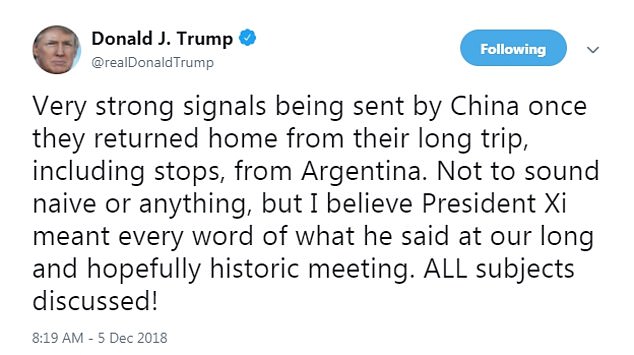 ZTE is China’s second-largest telecommunications equipment maker and relies on U.S. components for its smart phones and networking equipment.

The probation violation cited by the judge involves the same conduct the U.S. Department of Commerce penalized in April by imposing a ban on U.S. companies selling goods to ZTE.

Last month, the Trump administration launched an unusual lobbying campaign directed at allied foreign governments, asking them to press wireless and internet providers in these countries not to use Huawei equipment, according to The Wall Street Journal.

American officials have talked to their counterparts in Germany, Italy, and Japan – countries where Huawei products are widely used. 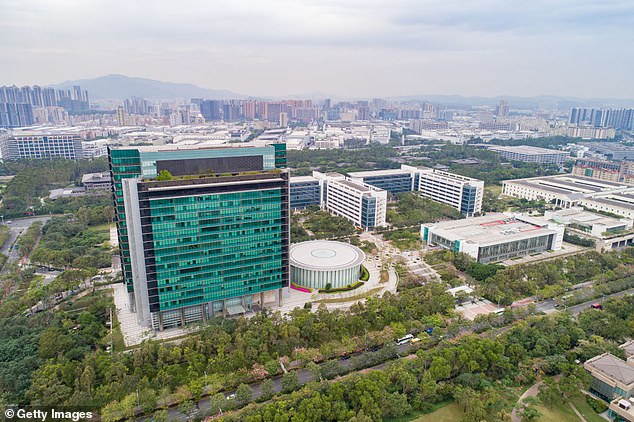 An aerial view of Huawei Global Headquarters on November 29, 2018 in Shenzhen, China

The U.S. is worried about the extent to which Chinese-made equipment is used in the telecommunications sectors of countries that host American military bases.

The move has been taken with a greater sense of urgency since internet providers are gearing up to purchase massive amounts of hardware for the much-anticipated 5G upgrade.

The advent of 5G promises to make superfast internet connection available to consumers. It is expected to speed up the development of self-driving cars and other technologies that rely on the internet of things.

Founded in China more than 30 years ago, Huawei’s announced revenue is on track to exceeded $100 billion in 2018 for the first time in its history.

Huawei has managed to achieve significant global market share despite the fact that it is largely shut out of the American market.

American lawmakers have claimed that Huawei passed sensitive information collected by its equipment to the Chinese government.

U.S. telecommunications firms fear that partnering with Huawei by allowing it to sell their smartphones would anger the federal government and jeopardize future contracts.

Huawei, for its part, has denied sharing information with the Chinese government, as has ZTE.

FA Cup third round TV games: Which matches will be televised on BBC and BT Sport and what time?