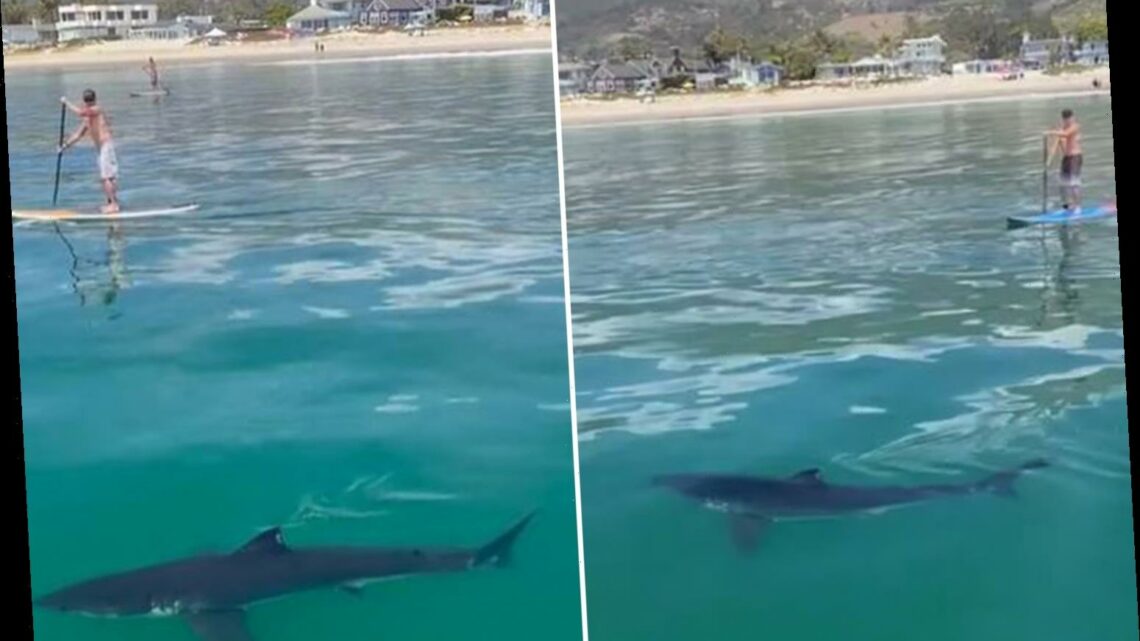 THIS is the chilling moment paddleboarders glide along the water in sunny California oblivious to the shark lurking dangerously close to them.

The shocking clip shows two paddleboarders enjoying a day out at sea, while what's believed to be a great white shark, hovers in the water ominously just metres away. 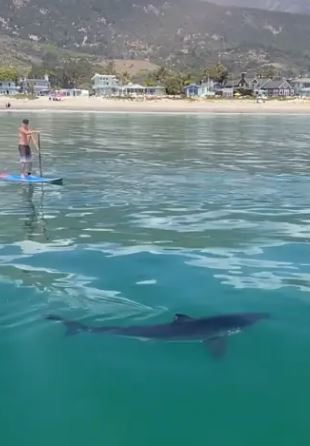 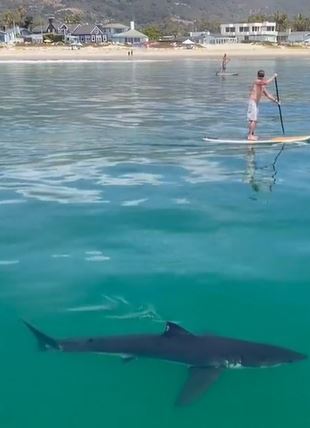 Great white sharks are the largest predatory fish on Earth and can grow up to 20ft in length and weigh over 5,000lbs.

The sharks are notorious thanks to movies such as Jaws, but experts insist they are not mindless killers.

The video, which was filmed from a boat in Santa Barbara, shows the shark, bigger than the paddleboards, in the crystal blue water with just the tip of it’s fin poking out.

The clip was posted on instagram by photographer and ocean lover Adam Ernster who wrote: “Although great white sharks deserve tremendous respect and space, it’s always inspiring watching the locals safely interact with these apex predators.”

Despite their huge size, they are also listed as a vulnerable species due to overfishing and poor regulation.

The International Shark Attack File's yearly report for 2020 says sharks killed 10 people around the world in unprovoked attacks in 2020, the highest number since 2013.

Earlier this month a fisherman in South Carolina wrangled in the catch of his life when he netted a 1000-pound great white shark with "wicked scratches" on its face.

Chip Michalove, dubbed the Great White Shark Whisperer of Hilton Head Island, was on his small 26-foot fishing boat with just one other fisherman when they nabbed a 12-foot great white shark in the sunny state's shark-infested waters.

And last month another fisherman managed to stroke a 16-foot great white shark before the beast started chomping at the boat's engine.

Erika Almond and her friends were fishing in the Gulf of Mexico off the coast of Tampa Bay on Friday when the massive great white approached their boat.

Great White Sharks are the biggest predatory fish in the world – growing up to 20ft long and 5,000lbs

Almond and her four friends were catching amberjack when the shark swam near their boat chasing the bait.

As the predator moved closer towards the group of friends, it began chomping the motor of the boat several times.

Meanwhile last month The Sun revealed Great White sharks could be hunting in British waters – and there have been more than 100 sightings, fishermen and experts say.

Academics say there's "no reason" the whopping creatures couldn't be swimming in the cold waters off the UK.

And anglers claim to have spotted the beasts off the coast off Devon and Cornwall in recent years.

Officially, the closest confirmed report was a female captured in 1977 in the Bay of Biscay – 168 miles off Land's End.

But one Devon fisherman says it's "more than likely" – and claims friends have seen the sharks in our waters.

The Former Housewife Jackie Goldschneider Wants Back On RHONJ

How old is Ed Balls and is he married? – The Sun
World News