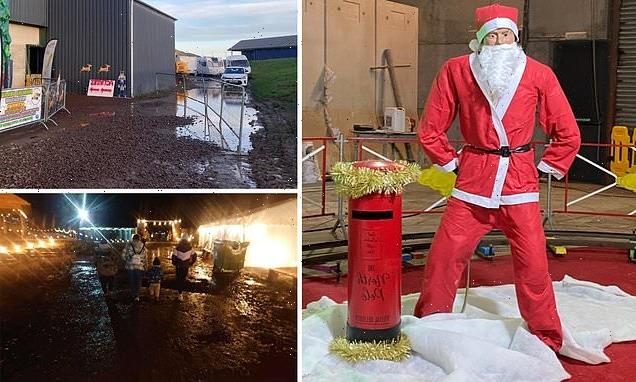 Children are left in tears by 'Christmas Fyre Festival'

A winter extravaganza has been branded a Christmas ‘Fyre Festival’ after fuming parents paid out to trudge through mud and ice, and see a handless mannequin Santa.

Parents visiting the Enchanted event at Balgone Estate in East Lothian, Scotland, also complained about rides that cost extra, were overpriced, and too short.

Several guests pointed out that the ‘maze’ was nothing more than hay bales ‘barely tall enough to hide a child’ while several areas were a quagmire.

And a light trail advertised as an ‘enchanted journey’ was dubbed a ‘half-lit muddy trail around a lake with half the lights missing’. Visits to an actual Santa were extra, at £15 per child.

One dad, who asked not to be named, said their two-year-old tot was left in tears by the event. 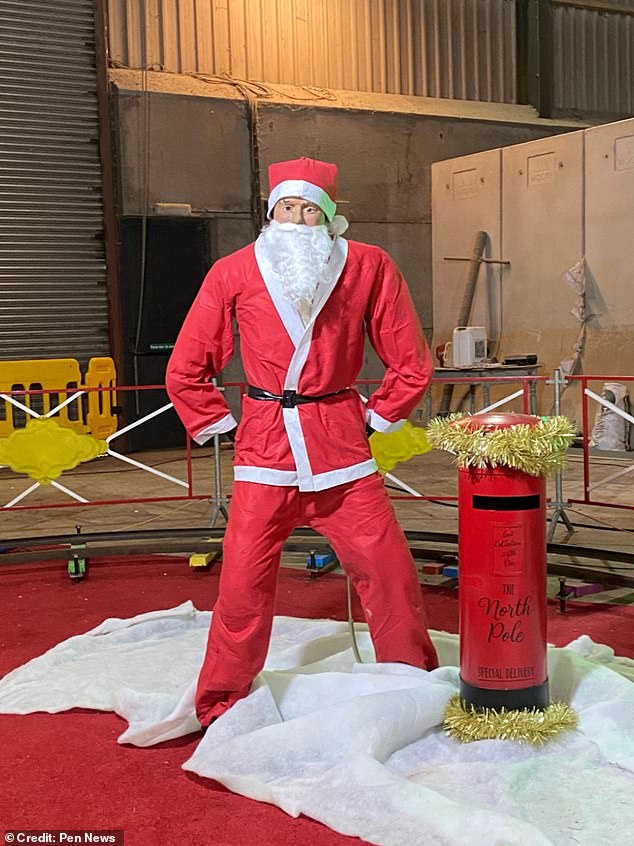 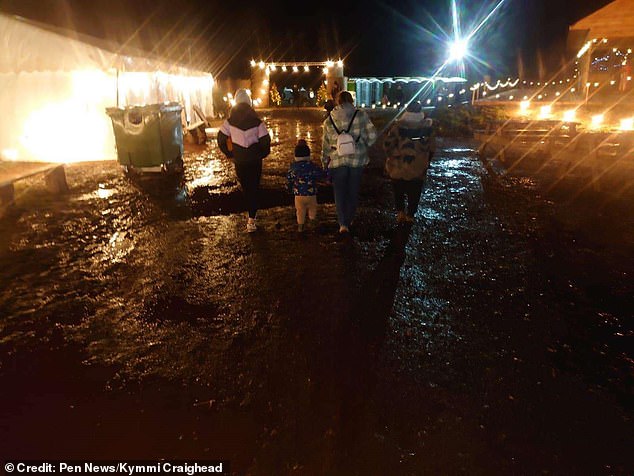 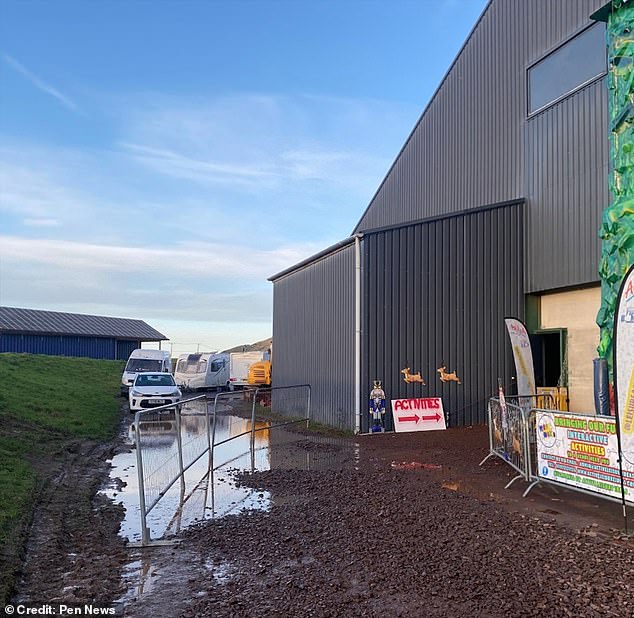 The parent, who paid £25 for his family of three to visit, said: ‘When we arrived it was clearly going to be a huge departure from the marketing materials.

‘It was a drive to a muddy farm field. The “carnival” was a wheat shed.

‘The event was severely understaffed, and mostly by young teenagers with little apparent training.’

He added: ‘My two year old started crying but we have another event planned which we know will be fine.

‘We’re very lucky – for other families this must have been their big event and I know some could little afford it.’

Another dad said he spent £100 on the event with his wife and two daughters – £40 for tickets, and another £60 on food, drinks and rides.

While some complained that the rides were too short, his kids couldn’t wait for them to finish.

He said: ‘We went to the train, a staff member starts the train and then walks off out of the barn. 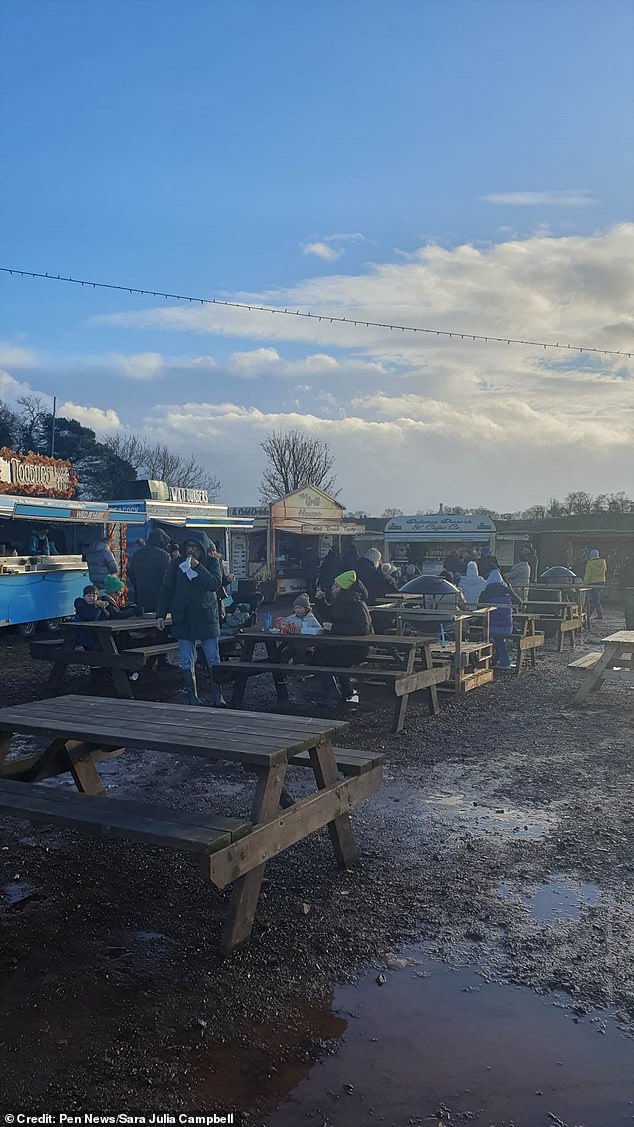 Others were unhappy with the ‘extremely muddy’ and ‘grimy’ paths, with one family leaving after only half-an-hour

‘Around seven minutes my two daughters were left going round and round on the train. I had to go find another member of staff to stop it.

‘Then my oldest daughter went on the bungee ropes and again the staff member in charge of the area disappeared and was gone for 10 minutes.

‘When she came back my daughter was just standing there wanting off.’

To make matters worse, others seemed not to have paid at all.

He said: ‘When we arrived there were no staff around to check tickets, so we thought “okay, maybe they check when you get to the actual lights area.”

‘I started asking other families if they paid for this, and I asked around 11 or 12 families the same question.

‘Every family said no, they didn’t pay, they just walked in, bar one other family that were just as unhappy as me.’

Sara Julia Campbell, who paid £20 to visit with her husband and 15-month-old, stayed only half an hour.

She said: ‘We got there and it was extremely muddy and the paths were grimy.

‘It was almost impossible to take the pram out of the car and it got stuck a lot.

‘Everything cost extra money, from the rides to the food, which was okay but expensive. We weren’t sure what we paid for other then parking.’

One visitor, commenting on Facebook, called it the ‘Fyre Festival of East Lothian’.

Mum Kirsty McIntosh raised concerns about the proximity of the light trail to a lake, which was partially frozen over.

She said: ‘There were no safety rings that I could see and only one steward that I saw.

‘If anyone had gone in the water it could have been disastrous – as recent events elsewhere have shown.’

She said the trail itself was partially closed off due to going through a badger sett.

‘We spent half of the time with our torches on trying not to fall on slippery ground into hidden ditches,’ said Kymmi Craighead, who visited with three other adults, paying £15 each.

Several customers were also angry that their complaints hadn’t been responded to.

Sue Hitchen, director of Edinburgh-based Foodies Festivals which organised the event, highlighted positive comments that had been received by visitors.

She pointed to guests who ‘thoroughly enjoyed’ their visit ‘and recommended it to other people’, and another who described ‘a lovely Christmas experience’. 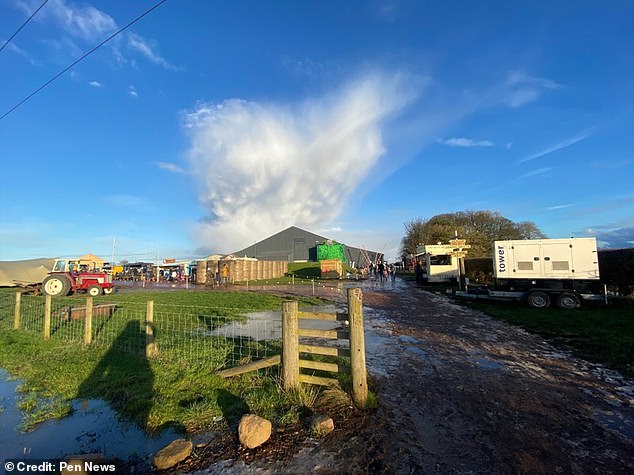 Even some of the customers who complained were complimentary about the food.

She continued: ‘We are obviously very concerned about anyone who feels that our event was disappointing.

‘We have planned this for several months with Balgone Estate as well as other partners such as local food suppliers, and have some very positive feedback from many of our visitors.

‘So these comments are being taken seriously and we are contacting those people to discuss this further.’

Asked for comment, Balgone Estate was emphatic that it had no role in the event besides providing a venue.

David Grant-Suttie, speaking for the estate, said: ‘We understand the disappointment shown by members of public.

‘We have tried our best to reply in an appropriate manner by making sure customers know we don’t hold the responsibility of the event, we are simply just the host space for an event.

‘We share the disappointment as we can see the event isn’t living up to the expectations of the customers.’