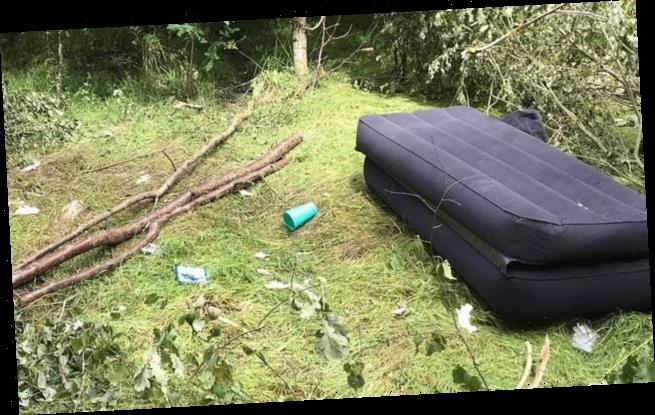 Charity fears littering will increase risk of scarring the countryside

A huge increase in littering and fly-tipping in woodlands during lockdown has harmed the countryside and put nature at risk, a charity has warned.

The Woodland Trust said there had been a surge of damaging behaviour at its more than 1,000 sites.

The trust and the Daily Mail are proudly supporting the Great British September Clean organised by Keep Britain Tidy.

The public and businesses are being encouraged to help pick up litter in their areas between September 11 and September 27. 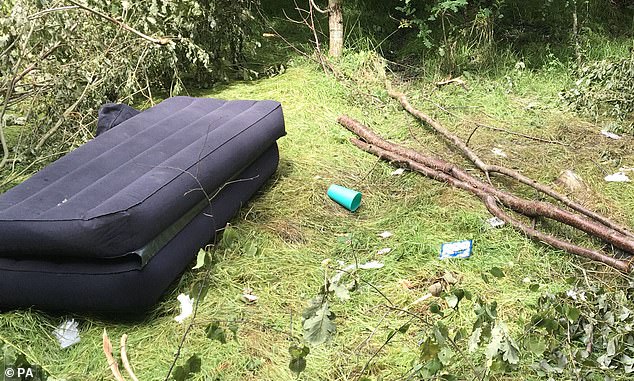 The Woodland Trust said there had been a surge of damaging behaviour at its more than 1,000 sites. The cost of clearing up the damage for the year is projected to be about £134,000. Fly-tipping at Hargate Forest in Kent is seen above

It was originally planned for March, as the Great British Spring Clean, and 680,000 people had pledged to take part, but the campaign was postponed because of the Covid-19 outbreak.

The Woodland Trust said litter it had to deal with included drug-taking paraphernalia, the remains of illegal campsites, plastic bags and broken glass.

The cost of clearing up the damage for the year is projected to be about £134,000, at a time when conservation charities have faced financial strain due to the lockdown.

Discarded rubbish can pose a threat to nature in many ways, the trust said. Plastics and metals do not naturally decompose and can persist in the environment for decades, changing the soil composition, while chemicals from more hazardous waste can leak into water courses.

Animals can suffocate in discarded plastic bags, get entangled in plastic can holders, and be injured by broken glass or get trapped in jars.

At the Woodland Trust site at Dering Wood, near Pluckley in Kent, people have chopped down and damaged trees, created camps and dropped litter and drug waste, as well as creating fire pits – forcing the charity to close the car park to try to curb the problem.

At Ashenbank in Gravesend, also in Kent, there have been similar problems and people have even been removing the protected great crested newts to take back to their ponds at home, according to the charity.

Furloughed staff answer the call to clean up Britain

By Helena Kelly for the Daily Mail

Unexpectedly out-of-work and determined to put their free time to good use, this is the army of furloughed workers on a mission to clean up Britain.

Now staff from Rudding Park, a luxury hotel and spa in Harrogate, North Yorkshire, are among those urging the rest of the furloughed workforce to get involved with the Daily Mail’s Great British September Clean.

Managing director Peter Banks, 51, found the perfect job for his restless staff after many were furloughed at the start of lockdown.

More than 40 signed up to his ‘Litter Pick Up Pop Up’ initiative including the executive chef, gardeners, cleaners and the reception team. They split into five groups who went out twice a week on different routes in Harrogate. 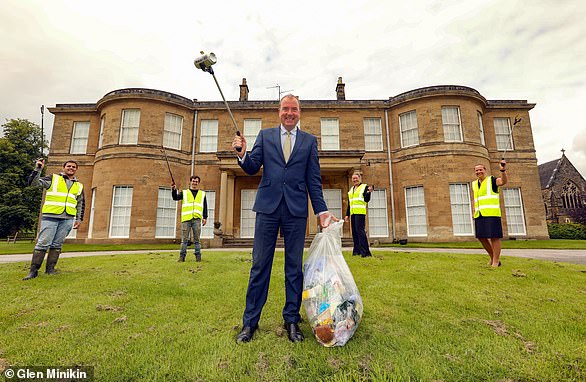 In June alone, the team picked up 400 kilos of rubbish and walked 1.6million steps between them.

Mr Banks said: ‘Honestly it’s been fantastic, it’s been great for staff morale, there’s been a really nice community spirit to it.’

He added: ‘I absolutely back the Mail’s campaign. It’s the right thing to do.’

His words were echoed by environment minister Rebecca Pow, who said: ‘We can all play our part in what must be a national effort to keep our country free of litter by joining the Great British September Clean. I certainly will be.’

Last month, the Treasury said some 8.9million workers were covered by the Government’s furlough scheme.

We are now calling on you – Britain’s furlough army – to do your bit for the environment with your extra time.

Whether it’s picking up a piece of litter on the way home from the shops or going out in a small group to help clean a small area, we want you involved.

You can sign up to pledge online and get started even before the Great September Spring Clean kicks off.

Other places which have seen littering, fly-tipping or anti-social behaviour include Skipton Castle Woods in North Yorkshire, Barber Wood near Cheltenham in Gloucestershire, and Smithills, near Bolton.

The Woodland Trust has urged the public to follow the countryside code and take litter home.

Norman Starks, director of operations at the charity, said: ‘It is great that people are getting outside and visiting our sites to enjoy the benefits of nature, which are so important in these difficult times, but we have seen a huge increase in mess.

‘The vast majority of people visit our sites respectfully but we have seen an increase in people misusing sites, for example setting up camps, chopping down trees, and other damaging activities such as mountain biking off designated trails.

‘These are very delicate habitats; in some cases they are hundreds of years old.

‘We need the public to join us in helping to continue to protect these environments.’

The trust said it had spent more than £1million cleaning up mess and fly-tipping across its woods over the past seven years, which is money that could have gone towards planting and protecting woodland environments.