Cat owners place their feline pets on VEGAN diets, despite warnings from vets, as one claims it stops them attacking rats!

Cats are being put on trendy vegan diets by owners, despite vets warning that a total lack of meat can be fatal for their pets.

As the fashion for going vegan has soared in recent years, cat owners have also been shifting their pets on to a plant-based diet, claiming that specialist pet food can provide the essential nutrients found in meat that they need to survive.

But scientists warn that domestic cats, like their wild ancestors, are so-called obligate carnivores, meaning they have a digestive system that cannot adapt to a vegan or vegetarian diet and need meat to stay healthy.

Justine Shotton, senior vice president at the British Veterinary Association, said: ‘It’s good to see pet owners taking an interest in the ingredients of their pet’s food, but a pet’s welfare must come first. Cats should not be fed a vegetarian or vegan diet. They require nutrients found in meat, such as taurine and preformed vitamin A, which are minimal or even absent in plant ingredients.’ 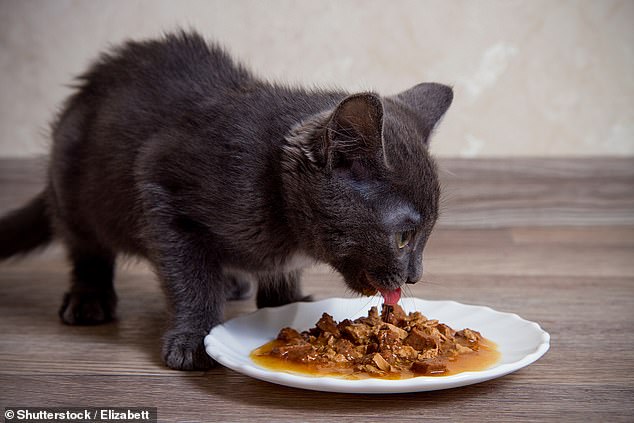 But Andrew Knight, professor of animal welfare and ethics at the University of Winchester, claims cats can get the nutrients they need from fortified vegan pet food – typically dry biscuits such as kibble – and that vets’ advice against a vegan diet for cats is ‘not up to date’.

He said: ‘If a vegan diet is formulated to be nutritionally sound, you would expect to see cats being healthy, or healthier, and that’s exactly what we are seeing.’

Joanna Farr, from Lincoln, has three cats on plant-based pet food. Her two tom cats, Rocky and Roman, have been vegan for 18 months, while her youngest cat, Quinny, has been vegan for more than three years. She told The Mail on Sunday: ‘The more people see cats living happy healthy lives on a complete plant-based diet, the less controversial this will become.’

Ms Farr also owns a chicken and a family of rescue rats. She says Quinny has ‘never shown any instinct to attack them’, adding that she believes this is proof that cats are not as bloodthirsty as often thought.

A recent study of 1,000 British cat owners by pet food brand Orijen found 41 per cent do not think their feline should eat meat at every meal.

Vet and author Pete Wedderburn said: ‘It is theoretically possible to source the nutrients cats need from non-meat, artificially made sources, but there is a risk so this is a practice that I would not recommend. If you want a vegan pet, I would recommend rabbits or guinea pigs.’

Exclusive: Savannah Guthrie and Hoda Kotb open up about friendship on and off air and the joys of working together
World News