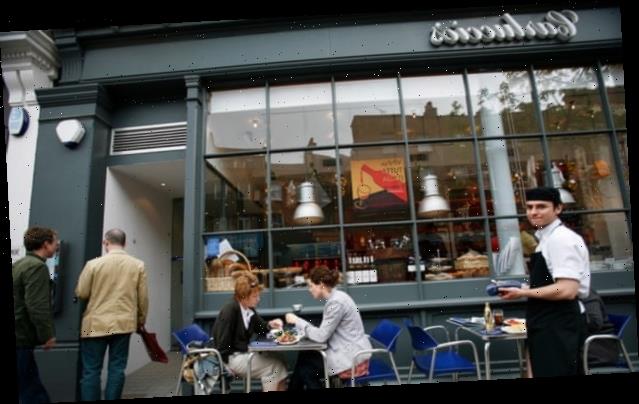 Carluccio’s set to file for administration amid coronavirus shutdown

The Italian restaurant chain Carluccio’s and the rent-to-own retailer BrightHouse are expected to be among the first high-street casualties of the coronavirus shutdown, putting about 4,400 jobs at risk.

Carluccio’s is understood to be preparing to file for administration. FRP Advisory, the restructuring specialist, confirmed it was working with the chain, which has 73 branches and about 2,000 employees.

The firm said in a statement: “FRP is working with the directors of Carluccio’s to consider all options for the company in the current climate.”

UK government support for workers and businesses during the coronavirus crisis

Direct cash grants for self-employed people, worth 80% of average profits, up to £2,500 a month. There are similar wage subsidies for employees.

Government to back £330bn of loans to support businesses through a Bank of England scheme for big firms. There are loans of up to £5m with no interest for six months for smaller companies.

Taxes levied on commercial premises will be abolished this year for all retailers, leisure outlets and hospitality sector firms.

Britain’s smallest 700,000 businesses eligible for cash grants of £10,000. Small retailers, leisure and hospitality firms can get bigger grants of £25,000.

Government to increase value of universal credit and tax credits by £1,000 a year, as well as widening eligibility for these benefits.

Statutory sick pay to be made available from day one, rather than day four, of absence from work, although ministers have been criticised for not increasing the level of sick pay above £94.25 a week. Small firms can claim for state refunds on sick pay bills.

Local authorities to get a £500m hardship fund to provide people with council tax payment relief.

Mortgage and rental holidays available for up to three months.

The restaurant chain was founded by the late chef Antonio Carluccio in 1999. The plan to call in administrators, first reported by Sky News, follows a difficult period for casual dining chains, with tough competition and rising costs.

In 2018, Carluccio’s landlords backed a restructuring plan in the form of a company voluntary arrangement (CVA), an insolvency procedure that allowed it to shutter loss-making sites, and led to the closure of about 30 of its restaurants.

On Thursday, Carluccio’s staff were told they would only receive 50% of their wages due for the month. The Unite union accused the chain of “wage theft” and threatened legal action.

Carluccio’s is controlled by the Landmark Group, the Dubai-based retail and hospitality conglomerate. At the time of the CVA, it promised to finance a multimillion-pound refurbishment for the restaurants unaffected by the CVA.

Meanwhile, the rent-to-own firm BrightHouse, which has been accused of overcharging, will collapse into administration on Monday, putting 2,400 jobs at risk.

The company – which sells household appliances and electrical goods on credit to primarily low-income customers – has been teetering on the brink for months after a regulatory crackdown on interest charges that reduced its income, but was tipped into failure by the economic stresses of the coronavirus outbreak.

BrightHouse said costly compensation claims by customers after the crackdown were costing it £1m every month.

It is understood that tentative restructuring plans were scrapped as the pandemic gained pace. The company – which is owned by a trio of investment funds, Alteri, Apollo and Highbridge – is expected to appoint Grant Thornton as administrators within days.

Why are UK high street retailers in trouble?

Physical retailers have been hit by a combination of changing habits, rising costs and broader economic problems as well as unseasonable weather. In the past few years names such as Mothercare, Karen Millen, Toys R Us, Maplin and Poundworld have disappeared from the UK high street as a result.

In terms of habits, shoppers are switching to buying online. Companies such as Amazon have an unfair advantage because they have a lower business rate bill, which holds down costs and enables online retailers to woo shoppers with low prices. Business rates are taxes, based on the value of commercial property, that are imposed on traditional retailers with physical stores.

At the same time, there is a move away from buying “stuff” as more people live in smaller homes and rent rather than buy. Uncertainty about the economy has also slowed the housing market and linked makeovers of homes. Those pressures have come just as rising labour and product costs, partly fuelled by Brexit, have coincided with economic and political uncertainty that has dampened consumer confidence.

Retailers with a high street presence want the government to change business rates to even up the tax burden with online players and to adapt more quickly to the rapidly changing market. They also want more political certainty as the potential for a no-deal Brexit means some are not only incurring additional costs for stockpiling goods but are unsure about the impact of tariffs at the end of this year. Retailers also want more investment in town centres to help them adapt to changing trends, as well as a cut to high parking charges, which they say put off shoppers.

In the December 2019 Queen’s speech, the government announced plans for further reform of business rates including more frequent revaluations and increasing the discount for small retailers, pubs, cinemas and music venues to 50% from one-third. It has also set up a £675m “future high streets fund” under which local councils can bid for up to £25m towards regeneration projects such as refurbishing local historic buildings and improving transport links. The fund will also pay for the creation of a high street taskforce to provide expertise and hands-on support to local areas.

Some retailers could go under. Weakened by a difficult Christmas – which accounts for the entire annual profits of many retailers, and with further potential Brexit wobbles to come – retailers are facing another tough year in 2020. The latest rise in the national minimum wage in April will also add to costs and hit profits. On the plus side, there are hopes of a boost to the housing market from increased certainty about Brexit after the general election. There are also signs that the shift to online shopping is slowing, potentially easing the pressure on high streets.

A spokesman for BrightHouse said: “The national response to the Covid-19 pandemic has required us to prioritise the health and wellbeing of our staff and customers, in particular by closing all stores in the last few days. While we continue to actively engage with our stakeholders, these developments have made the task of finding a future for BrightHouse more challenging.”

The company’s collapse will probably mean its 240 stores – which have been closed since last week – will disappear from the high street and leave thousands of staff unemployed.