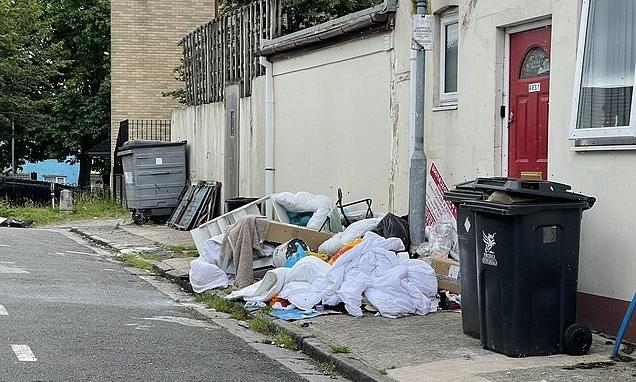 Residents in a Cardiff neighbourhood have slammed university students who leave enormous mounds of rubbish that attract ‘rats the size of cats’ when they move out.

Cathays residents say the ‘disgusting’ problem happens every year when the students move out of their houses at the end of term.

They have called for fines and an intervention from Cardiff Council to help alleviate the problem.

The council said it has been working closely with universities to ensure students dispose of their waste correctly.

Their waste enforcement team served over 2,500 enforcement notices on properties in Cathays this year.

During this year’s move-out period, the council also provided additional facilities and cleansing resources, including a pop-up recycling centre and a pickup recycling takeaway van. Additional collections have also been organised for this weekend.

Verity Free, who has lived in Cathays for three years, claims the rubbish attracts ‘swarms of seagulls and rats the size of cats’.

She uploaded photos online which show black and green bin bags that have been torn open, their contents strewn all over the street. 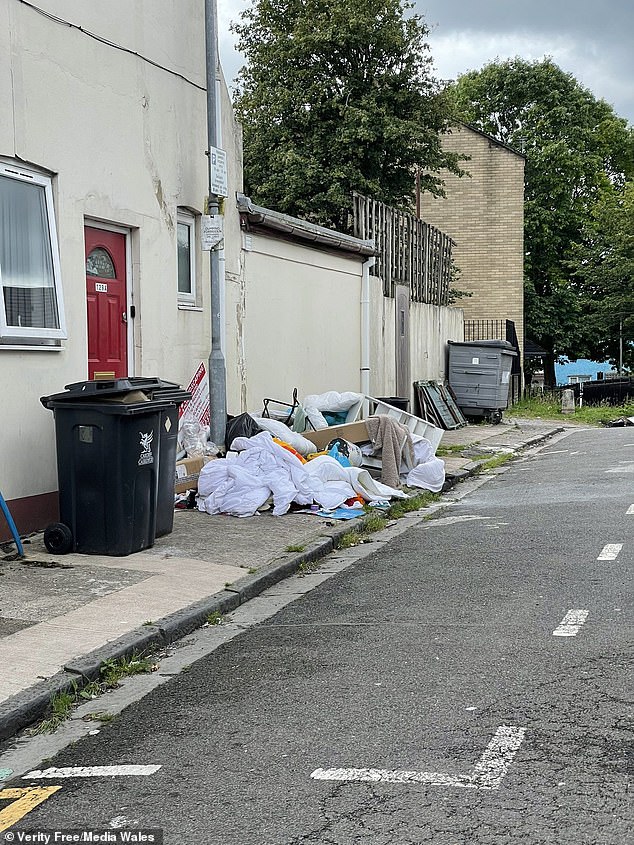 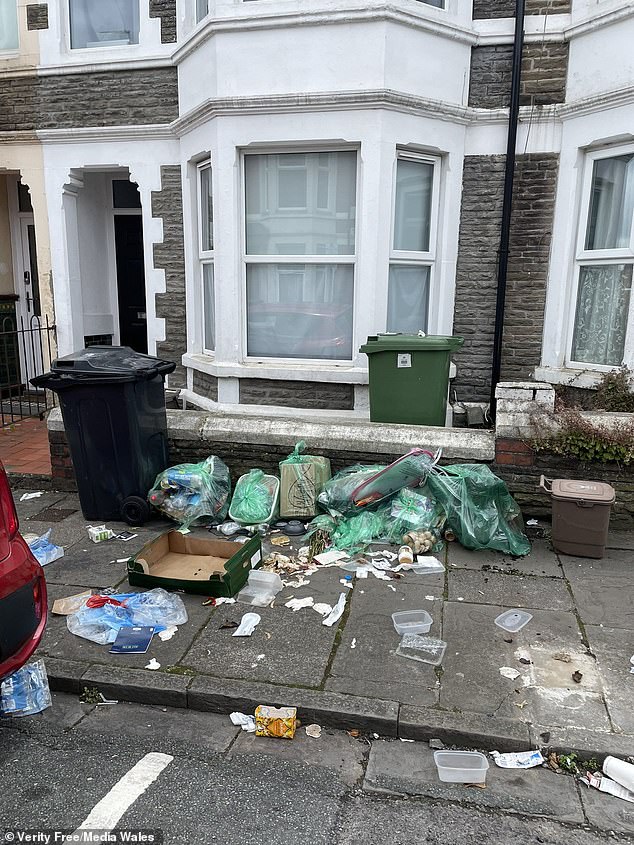 One of the photos shows larger household items – including bedding and a towel – completely blocking the pavement.

The 28-year-old paediatric nurse said there has ‘always been a rubbish issue’ throughout the year in Cathays, with students and people living in HMOs failing to recycle correctly.

‘They’ll put food in the recycling bags, and then obviously that just attracts seagulls and rats. They won’t get picked up by the bin, which is completely understandable, because it’s not the bin men’s fault.’

But she said at the end of every academic year when students move out, the problem reaches ‘horrific’ levels.

‘This week, and the previous years of moving out week, it’s just horrific. There’s fly tipping around bins, and people shamelessly leaving the rubbish out on, say, a Thursday, when the bins got collected on Wednesday. And it’s there all week then. It’s just disgusting, and the rubbish flies all down the street.’

She continued: ‘There are children playing in the street, there are families that live here. It’s so unhygienic.’ 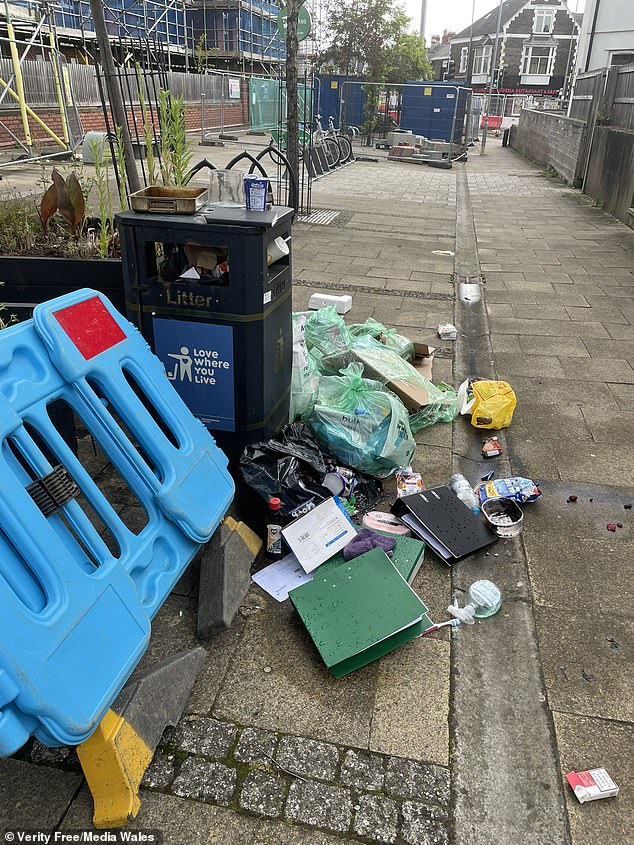 She added that ‘not everyone’ in Cathays was to blame. ‘There are people who live here who respect the area and put rubbish away properly. But then, I think if one house gets away with it, then everyone does it.’

Verity also said she had complained about the rubbish to the council and reported houses for not recycling properly, but ‘nothing’s been done about it’.

She believes a preventative measure could be the solution, rather than increasing the work load of the bin men and making the council clean all the rubbish up.

Fines on the landlords or the tenants could make people ‘think twice’ before fly tipping, Verity argued.

Other residents expressed their anger at Verity’s photos on social media, with one commenting: ‘Gets worse every year, they’re only encouraged by getting away with fly tipping outside their own houses the rest of the year. There’s almost certainly going to be identifying information amongst that lot. Should be slapped with massive fines.’ 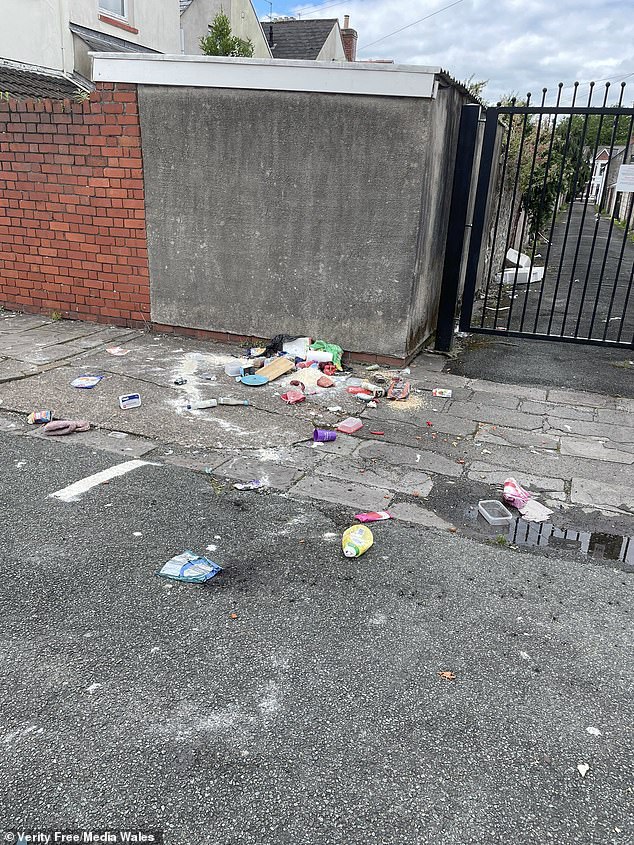 The  council’s waste enforcement team has served over 2,500 enforcement notices on properties in Cathays this year

A spokesperson for Cardiff Council said: ‘The council works closely with the universities through a dedicated student liaison officer to provide information, advice and services to students before they leave the city for the summer, so they can recycle their waste and dispose of it correctly.

‘Every household that is registered as a student property received a letter and information booklet from the council and the university setting out exactly how they should dispose/recycle their waste, and this was followed up by officers door knocking 3376 properties during the evenings to assist them with the process.

‘Additional facilities have been provided, including a pop-up recycling centre which was held at the Haydn Ellis and CUBRIC University building car park on June 25th and 26th and July 3rd. This facility could be accessed by car, cycle or by foot and was widely publicised through the leaflet, the Cardiff Digs website and through social media.

‘A pickup recycling take-away van also visited streets in Cathays, so that students could recycle smaller electrical items. The van visited Monthermer Road; Llantrisant Street; Gladys Street, Harriet and Coburn Street and Miskin Street during set times each day between June 27th and July 1st; and will continue this week between July 4th and July 8th.

‘Additional cleansing resources have also targeted Cathays during the student move out, with additional collections organised for this weekend to manage the additional waste presented for collection.

‘Along with the opportunities for students’ to recycle their waste and the services provided from the kerbside, there shouldn’t have been any waste dumped outside properties or in frontages, causing an eyesore for local residents.

‘Our enforcement team is actively working in the area, to inspect, remove and serve notices on individuals that have dumped large amounts of waste outside their rented property and appropriate action will be taken. This year alone, the waste enforcement team has served over 2,500 enforcement notices on properties in Cathays.

‘Our message to students that haven’t yet left the city for the summer is please act responsibly, think of your neighbours and the community you are leaving behind and dispose of your waste through the facilities provided.’

Who is Joey Chestnut and what is his net worth? | The Sun
World News