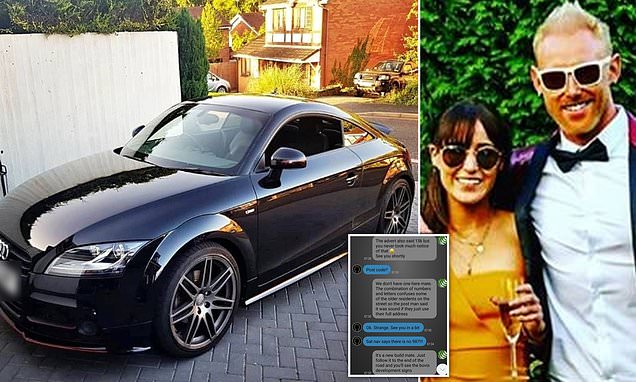 Car seller turns the tables on rude would-be buyer wanting £9,000 discount on his £15,000 Audi by sending him on 12-mile wild goose chase 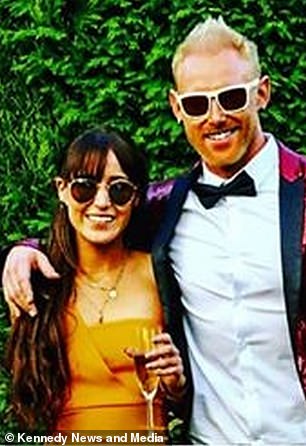 Rob Keen was stunned when the abusive customer offered just £6,000 in cash for the car then branded him a  ‘d***head’ when he declined his bid. Mr Keen is seen with his partner, Jemah, 28, in an undated photo

A mischievous car seller sent a rude buyer on a 12-mile wild goose chase after being bombarded with foul-mouthed messages demanding a £9,000 discount on his £15,000 Audi.

Rob Keen, from Worcester, was stunned when the abusive customer offered just £6,000 in cash for the car then branded him an ‘absolute d***head’ when he declined his bid.

The computer sciences student decided to take him for a ride by letting him believe he had buckled under the pressure and would drop the price on the 2014 Audi TT Black Edition S Quattro.

The pair continued to exchange messages for an hour with the smug unnamed buyer bragging ‘I no [sic] my stuff mate, been in the car game for years’, before requesting Rob’s address.

Mr Keen, 32, sent over an address he picked at random on Google, and it was only when the furious buyer couldn’t spot the Audi on the drive that he realised he’d been played.

The fuming customer ended the 43-message exchange with an ominous ‘do you know who you’re messing with?’ before signing off with ‘I’ll find you’. 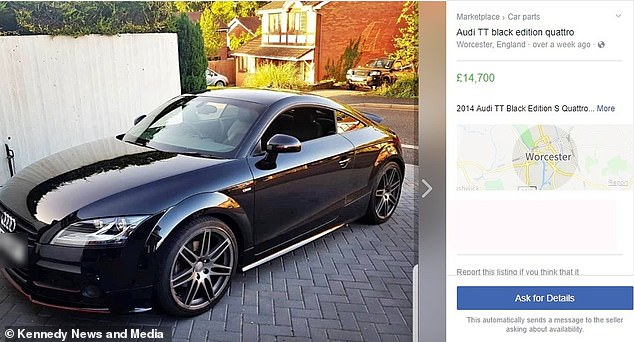 The advert, shared on Facebook Marketplace, describes the car as having 55,000 miles on the clock, a full Audi service history and heated leather seats

Mr Keen said: ‘I’m always winding people up, I relish this sort of thing. I don’t do it unless it’s justified, I don’t go out of my way to be an idiot.

‘He texted me about it out of the blue early in the morning and made an insulting offer of £6,000.

‘I tried to be polite about it first off because everyone’s going to try their luck, but what made me think I was going to wind him up was when he got a bit aggressive.

‘Every message I got from him was a surprise, I couldn’t believe he was going along with it.

‘Reading it back it seems quite obvious I’m taking him for a ride but he obviously doesn’t have the IQ to understand that kind of thing.’ 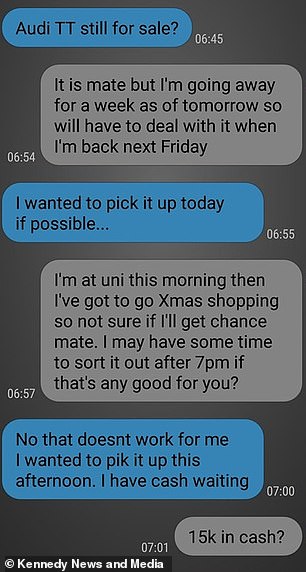 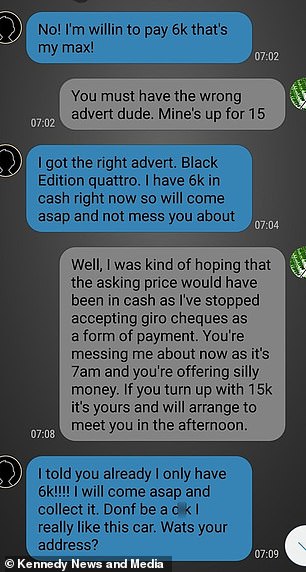 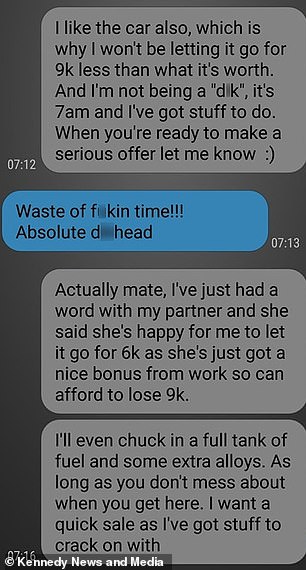 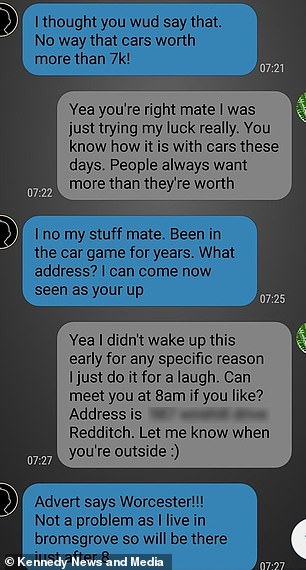 Mr Keen again rejects the offer, before suddenly pretending he is actually interested and giving the buyer a fake address 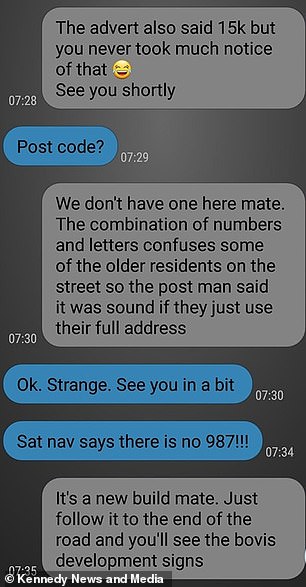 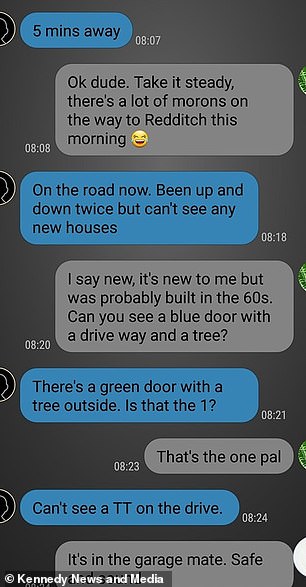 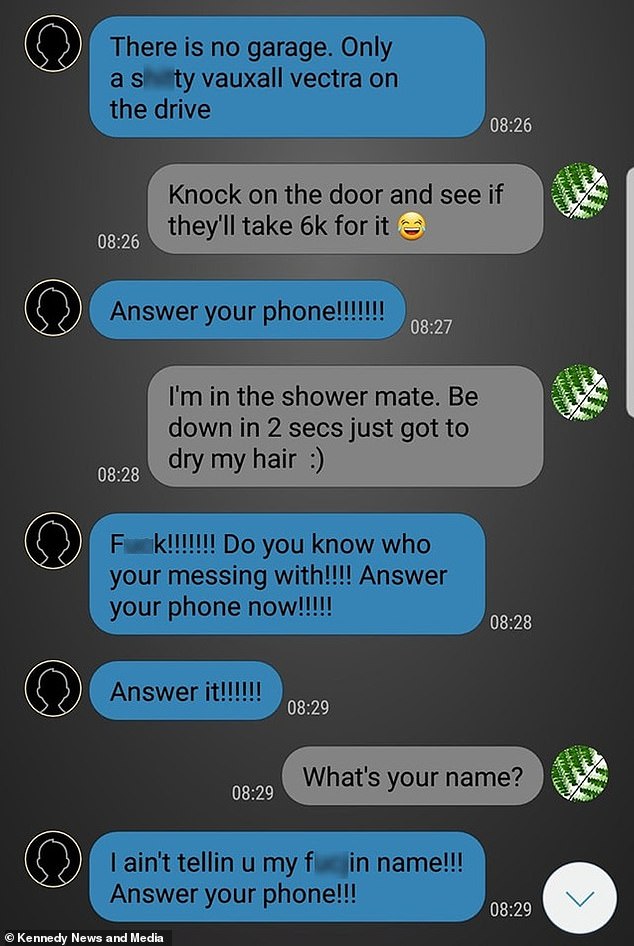 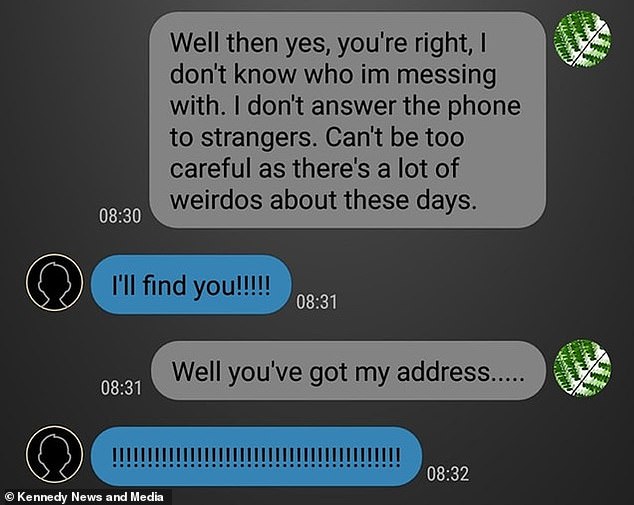 The fuming customer ended the 43-message exchange with an ominous ‘do you know who you’re messing with?’ before signing off with ‘I’ll find you’

‘I’ve not heard anything else from him, I blocked his number once I got bored of it,’ he said.

His advert, shared on Facebook Marketplace, describes the car as having 55,000 miles on the clock, a full Audi service history and heated leather seats.

Mr Keen added: ‘It’s in excellent condition, I love cars and change them regularly – I get bored of them.

‘If anyone is interested in putting in a serious offer get in touch, I’ll even pass on my real address.’ 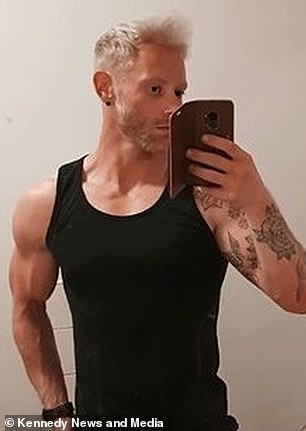 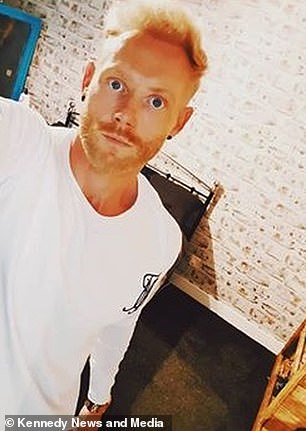 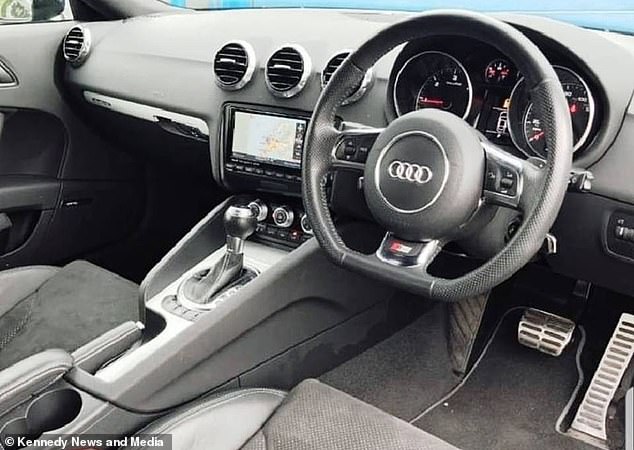 The inside of Mr Keen’s  2014 Audi TT Black Edition S Quattro, which he is still hoping to find a buyer for

The full exchange between Rob Keen and the enraged buyer

Rob: ‘It is mate but I’m going away for a week as of tomorrow so will have to deal with it when I’m back next Friday.’

Buyer: ‘I wanted to pick it up today if possible*’

Rob: ‘I’m at uni this morning then I’ve got to go Xmas shopping so not sure if I’ll get chance mate. I may have some time to sort it out after 7pm if that’s any good for you?’

Buyer: ‘No that doesn’t work for me i wanted to pik it up this afternoon. I have cash waiting.

Buyer: ‘I got the right advert. Black Edition quattro. I have 6k in cash right now so will come asap and not mess you about.’

Rob: ‘Well, I was kind of hoping that the asking price would have been in cash as I’ve stopped accepting giro cheques as a form of payment. You’re messing me about now as it’s 7am and you’re offering silly money. If you turn up with 15k it’s yours and will arrange to meet you in the afternoon.’

‘I will come asap and collect it. Don’t be a d**k I really like this car. Wats your address?’

Rob: ‘I like the car also, which is why i won’t be letting it go for 9k less than what it’s worth.

‘When you’re ready to make a serious offer let me know :)’

Rob: ‘Actually mate, I’ve just had a word with my partner and she said she’s happy for me to let it go for 6k as she’s just got a nice bonus from work so can afford to lose 9k.

‘I’ll even chuck in a full tank of fuel and some extra alloys.

‘As long as you don’t mess about when you get here. I want a quick sale as I’ve got stuff to crack on with.’

Buyer: ‘I thought you wud say that. No way that cars worth more than 7k!’

Rob: ‘Yea you’re right mate I was just trying my luck really. You know how it is with cars these days. People always want more than they’re worth.’

Buyer: ‘I no my stuff mate. Been in the car game for years. What address? I can come now seen as you’re up.’

Rob: ‘Yea I didn’t wake up this early for any specific reason I just do it for a laugh. Can meet you at 8am if you like? Address is: * Redditch. Let me know when you’re outside :)’

Buyer: ‘Advert says Worcester!!! Not a problem as I live in Bromsgrove so will be there just after 8.’

Rob: ‘The advert also said 15k but you never took much notice of that 😀 See you shortly.’

Rob: ‘We don’t have one here mate. The combination of numbers and letters confuses some of the older residents on the street so the postman said it was sound if they just use their full address.’

Rob: ‘It’s a new build mate. Just follow it to the end of the road and you’ll see the Bovis development signs.’

Rob: ‘Ok dude. Take it steady, there’s a lot of morons on the way to Redditch this morning :D’

Buyer: ‘On the road now. Been up and down twice but can’t see any new houses.’

Rob: ‘I say new, it’s new to me but was probably built in the 60s. Can you see a blue door with a driveway and a tree?’

Buyer: ‘There’s a green door with a tree outside. Is that the 1?’

Buyer: ‘There is no garage. Only a sh***y Vauxhall Vectra on the drive.’

Rob: ‘Well then yes, you’re right, I don’t know who I’m messing with. I don’t answer the phone to strangers. Can’t be too careful as there’s a lot of weirdos about these days.’

Rob: ‘Well you’ve got my address*’

Murder of Scandinavian tourists being treated as a ‘terrorist act,’ more arrests made
World News