BEIJING — Hope you enjoyed that gold while you had it, Team USA.

Canada’s women’s hockey team lost the gold medal game in 2018 in a shootout. Team Maple Leaf made sure that wasn’t going to happen again this time around, thoroughly dominating the Americans in a 3-2 game that demonstrated that while these are by far the best two teams in the world, they’re not equals.

Team USA has reached the gold medal game in six of the last seven Olympics. Canada has reached that mark in all seven. The U.S. has won two of those gold medal games, the Canadians the other four (plus one more in 2006, when the U.S. took bronze). USA-Canada women’s hockey is one of sports’ best rivalries … but it’s a rivalry where one side continues to hold a decided edge.

This year’s gold medal game began with the United States in an uncharacteristically conservative mode. For most of these Games, Team USA has played like it was getting paid per shot, firing more than 40 in each of the last six games. But the Americans attempted only a single shot on goal through the first 10 minutes of the first period, while Canada swarmed goalie Alex Cavallini and peppered shot after shot in the direction of the U.S. net.

Canada apparently drew first blood, as Natalie Spooner scored on a deflection off Cavallini. But the United States challenged the goal, claiming Canada was offsides, and the referees agreed. Less than two minutes later, though, Canada’s Sarah Nurse snaked one into the net off a face-off, and this one held up.

The attack continued. With just under five minutes left in the period, Canada’s Marie-Philip Poulin hoisted an unassisted goal just over the left shoulder of Cavallini and into the back of the net.

Less than 30 seconds later, a delay-of-game penalty left the U.S. shorthanded for an agonizing two minutes. Canada was unable to score, though, and the penalty kill gave the United States some much-needed life — if not some even more needed goals — as the first period wrapped. Both teams ended the period with 11 shots on goal, but only one team had two of those shots go in.

Any advantage the United States hoped to gain early in the second, though, vanished with the speed of a second strike off the stick of Poulin. With 9:08 elapsed in the period, Poulin whistled a second goal past Cavallini. It was a remarkable bit of heads-up hockey; the puck pinged off Poulin’s left skate and she promptly fired it toward the net, where it bounced off Cavallini’s right skate and into the net. The 3-0 Canada lead marked the largest margin either team had enjoyed in the Olympics in this series since 1998.

With 8:51 left in the second, the United States finally had a power-play opportunity thanks to a holding call on Canada’s Jocelyn LaRocque. That went by without a goal, but the U.S. clambered off the deck later in the period when Hilary Knight scored a short-handed goal off her own rebound to cut the margin to 3-1.

THE UNITED STATES IS ON THE BOARD! 🇺🇸

The U.S. spent most of the third period with the kind of tenacious, grinding offense and smothering defense it had lacked all game … unfortunately for Team USA, it was the same result on the scoreboard. On this day, Canada was just faster, sharper and more precise. When another mid-period power play passed without the U.S. able to score, the final outcome became that much more obvious.

Cavallini skated off the ice with just over three minutes left in the game, and the jubilant Canadian team and fans in the stands began cheering in anticipation. With a six-on-four advantage, Team USA finally managed a goal with 12.5 seconds remaining to salvage some pride … and an honorably earned silver medal.

In the final frantic seconds, the United States tried for one last shot, but Canada swarmed the Americans. As the horn sounded, the puck slid slowly down the ice, away from the mass of Canadians and their hooks and sticks splayed on the ice. The United States knelt, embraced, and watched from the far end of the rink. 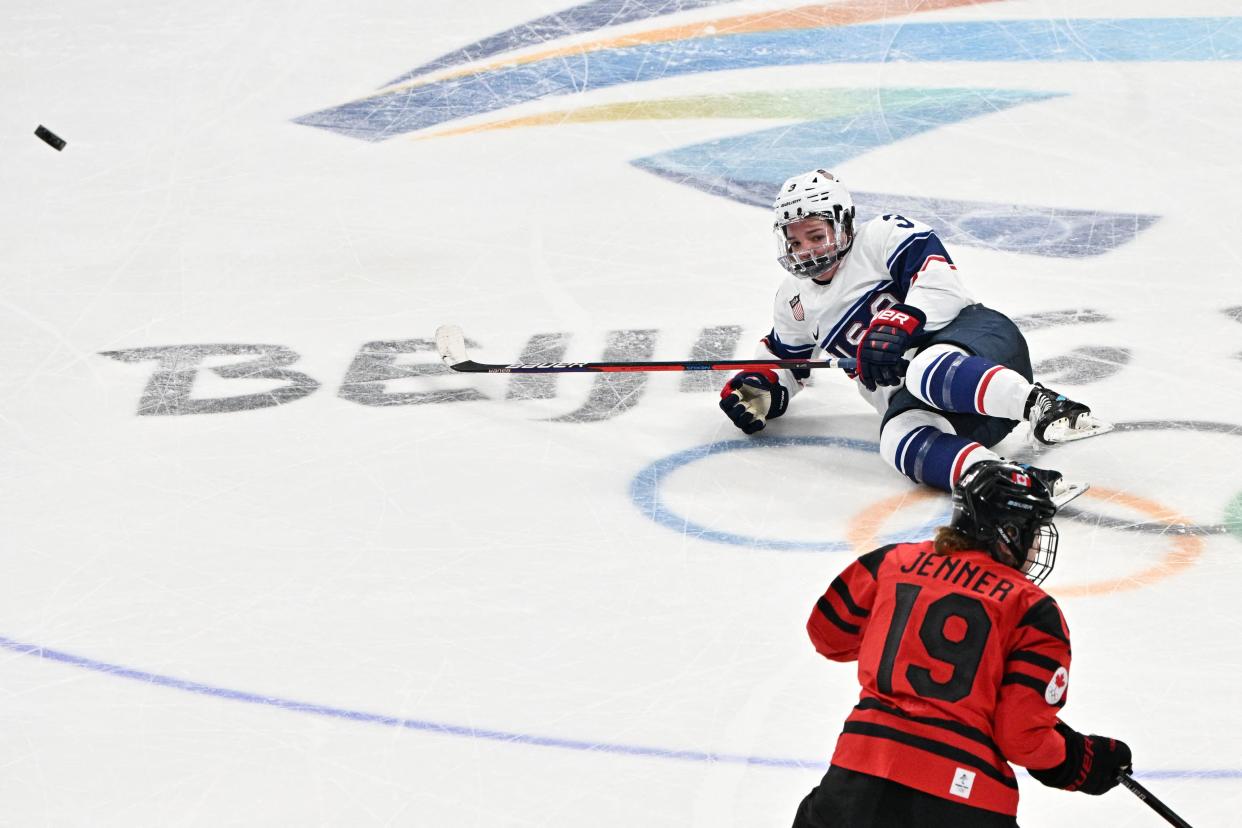