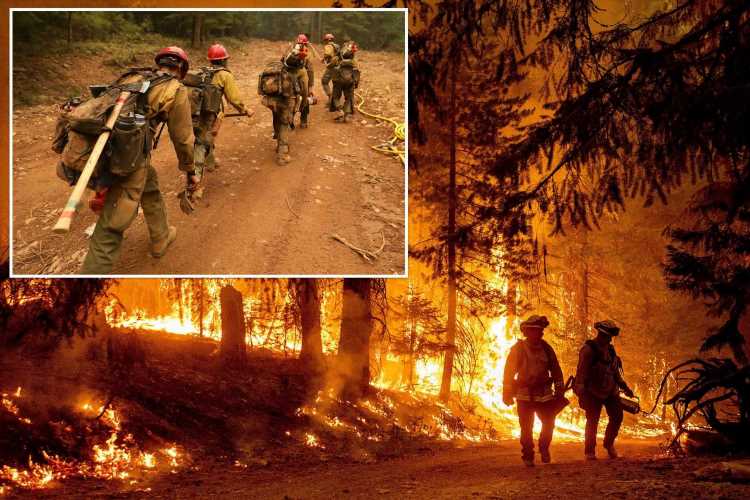 California firefighters hold back huge blaze near town torched in 2018

Wildfires rage across Western US

Fire alarm: California and other parts of the West broil and burn

Wildfire spawns terrifying ‘firenado’ that can be seen on radar

California firefighters scored a rare win for this season when the state’s largest wildfire stayed within a perimeter they built.

The Dixie Fire, burning northeast of the town of Paradise, which was largely destroyed in 2018, was burning nearly 241,000 acres, or about 375 square miles, Saturday morning and was just 24 percent contained, according to Cal Fire, the state’s wildfire agency. It’s destroyed at least 42 homes so far and threatens more than 10,000 others.

California’s largest wildfire so far this year was flaring up Friday but it was because the flames were chewing through unburned islands of vegetation within a perimeter that firefighters have built, The Associated Press reported.

“There’s nothing close to our line right now. It’s all interior fuels burning,” Mike Wink, an incident commander, said in an online briefing.

Drought and another major heat wave continue to help fires burning throughout California and other Western states, and they are moving east. Two large fires are now burning in South Dakota, and 20 in Montana, according to the National Interagency Fire Center.

In southern Oregon, the nation’s largest wildfire was about 53 percent contained Saturday morning, after scorching over 646 square miles in the Fremont-Winema National Forest. Active fire behavior there also was mainly interior pockets of vegetation burning, a situation report said.

Thunderstorms Thursday and Friday sparked at least 22 new fires in the state, The Oregonian reported. Most were contained but one, the Deep Creek fire, was burning around 1,200 acres in the middle of the state, according to Central Oregon Fire Info.